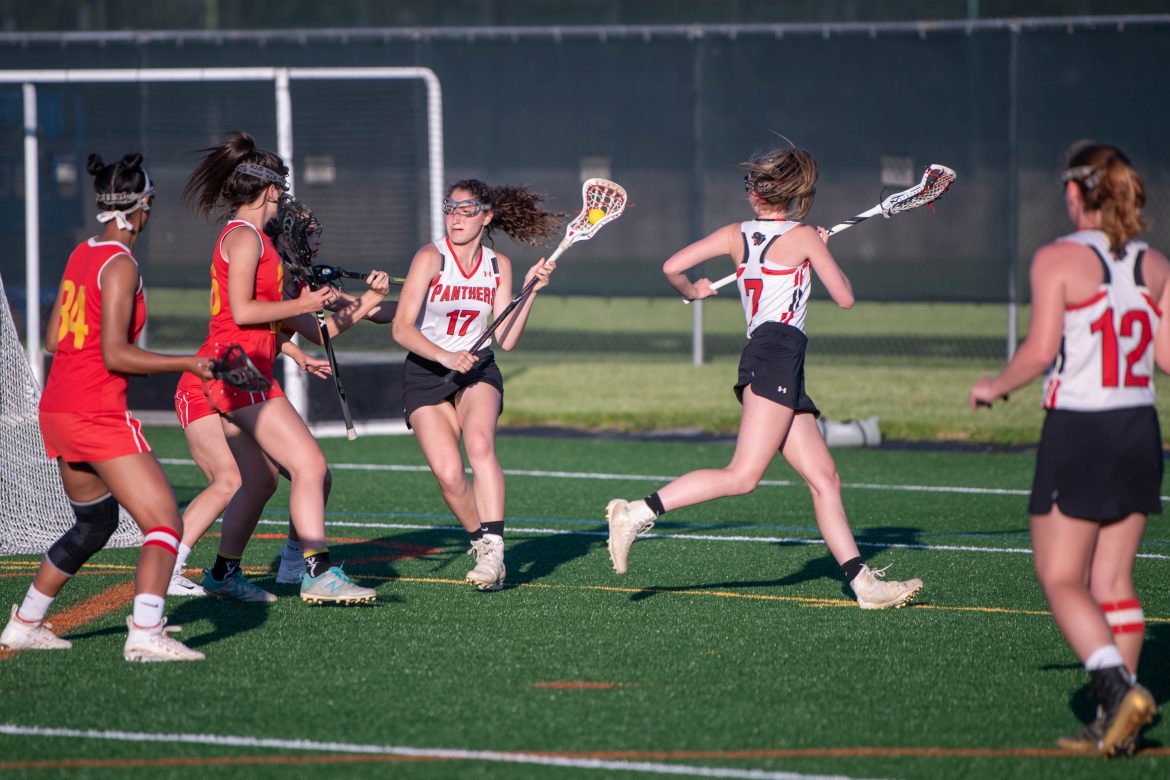 Saucon Valley’s Maria Donahue (#17) and her four goals led the Panthers against the Moravian Academy Lions in the 2019 District XI semifinal.

On Monday, at the neutral turf field at Emmaus High School, the #1 seeded Lady Panthers battled #4 Moravian Academy in a 2019 District XI championship semifinal.  The winner would advance to take on the Southern Lehigh Spartans who defeated Allentown Central Catholic 15-10 in the first semifinal.  With a loss, the season comes to a close.  In their regular season matchup about three weeks ago, Saucon Valley defeated the Lions 16-6.  Any thoughts of a post-season surprise were quickly put to rest. 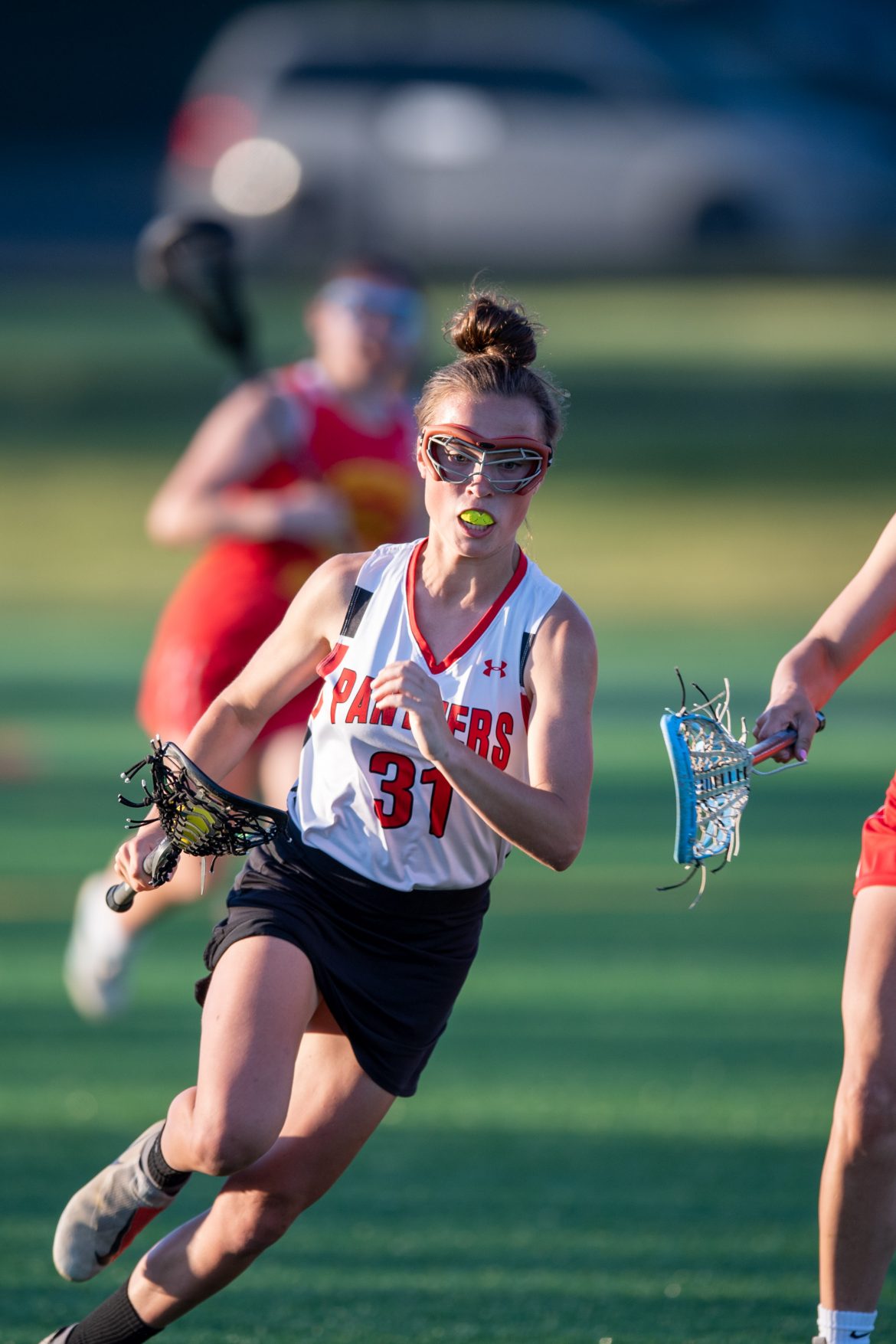 Kiele Riefenstahl was first to get Panthers on the scoreboard in the 2019 District XI playoffs.

Saucon Valley wasted little time to get on the scoreboard first.  A little over a minute into the game Panther senior Siobhan Coakley fed classmate Kiele Riefenstahl who fired a quick bouncer through the “5-hole” of the Moravian Academy goalie.  The Panthers went on to win the next possession and about twenty seconds later Coakley assisted Katherine Naiburg who went high on the Lion keeper with fastball to the back of the net. 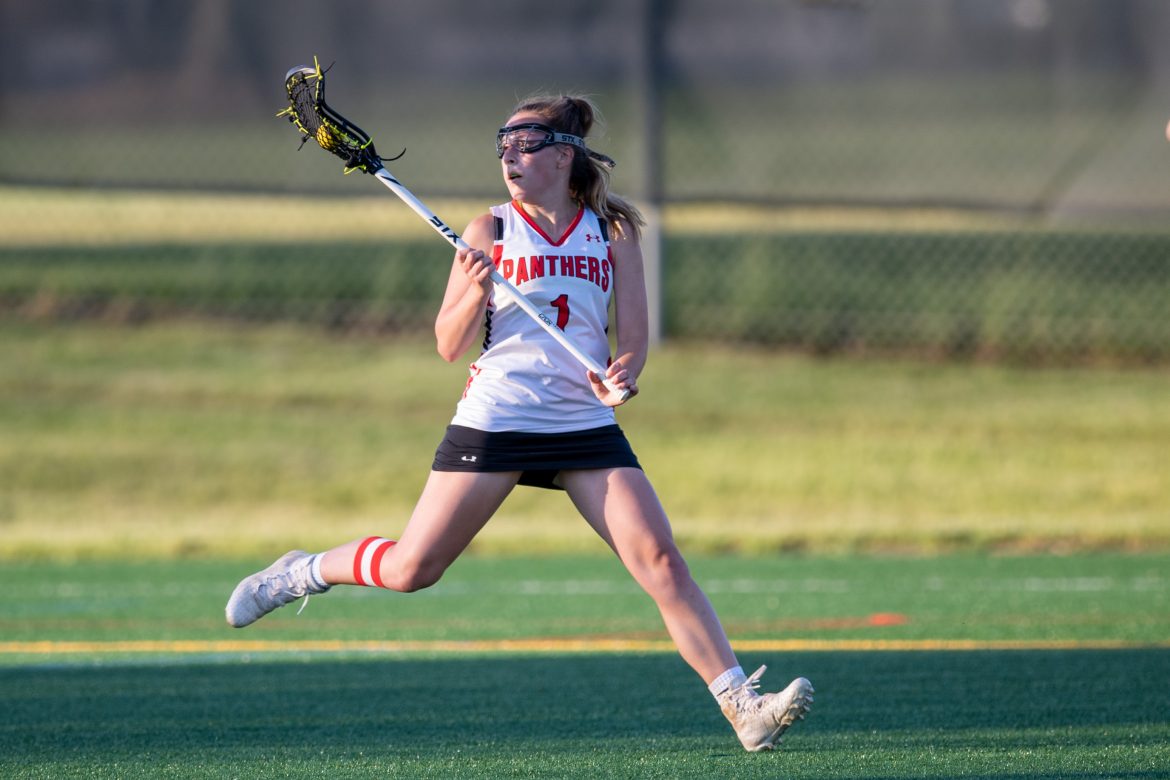 Camryn Zavacky was a force taking draws for the Panthers in the 2019 District XI semifinal.

Saucon Valley’s Camryn Zavacky continued to win the draw and her Panther-Pals continued to score.  At 21:08 Maria Donahue accepted a pass from Kiele Riefenstahl and went top-shelf for another Panther score.  Twenty-five seconds later Brooke Riefenstahl, from behind the goal, found Katie Marker cutting through the middle of the crease.  It was a “bang-bang” play that finished with Marker quickly depositing the ball into the back of the net.  A few minutes later Marker dialed in on a cutting Camryn Zavacky who scored another Panther goal.  Only nine minutes into the game, Saucon Valley led 5-0. 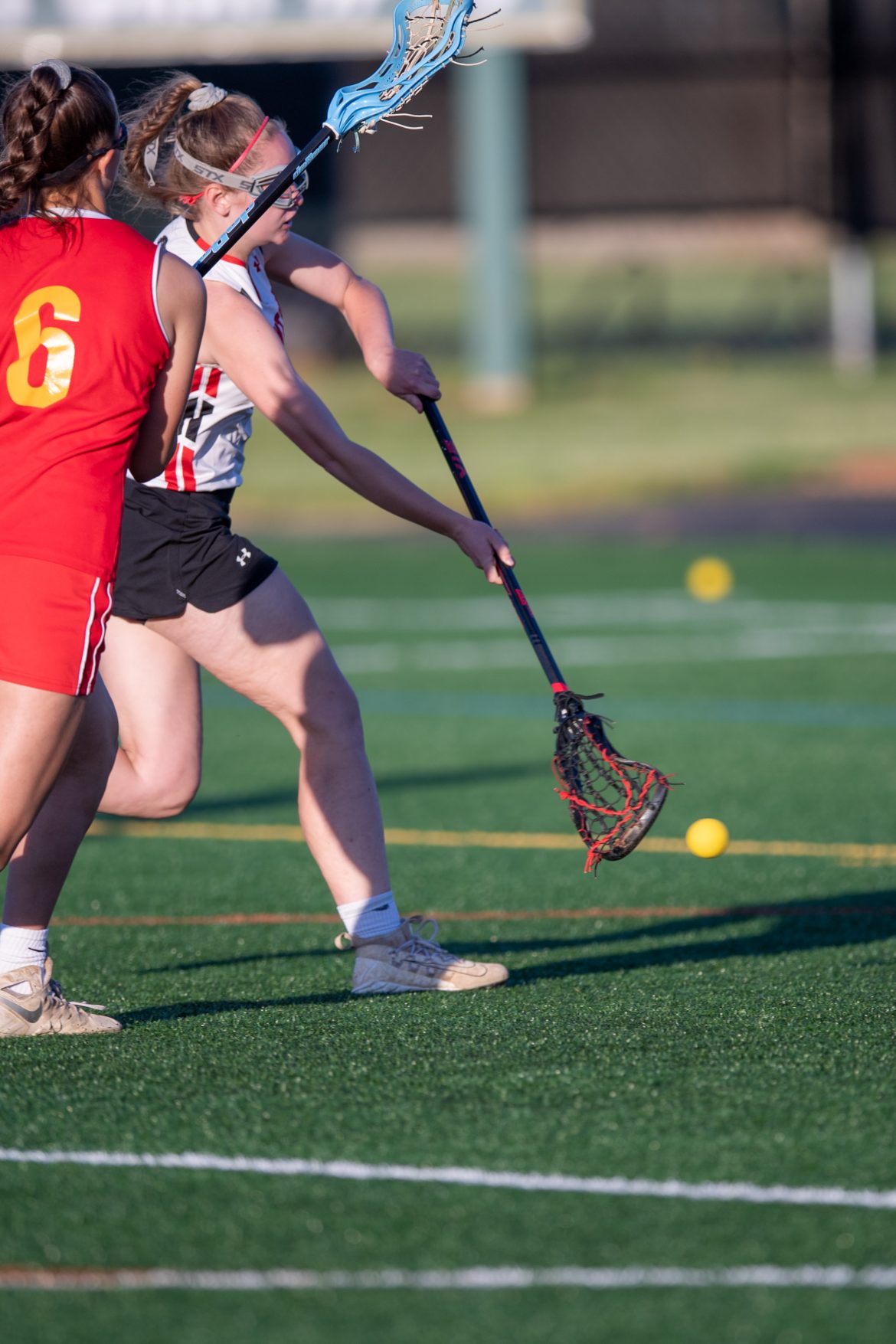 Megan Kane sweeps the ball into the goal for one of her four Panther scores.

Moravian Academy called time out to try and stop the bleeding, but the Panthers were quick to get back to their scoring ways.  With a crisp pass, Maria Donahue found Megan Kane camped out in front of the Lion goal. Kane gathered Donahue’s offering and swept a low roller past the Moravian Academy keeper.  With 14:59 remaining in the 1st half Saucon Valley shared the wealth and used six different scorers to build a 6-0 lead. 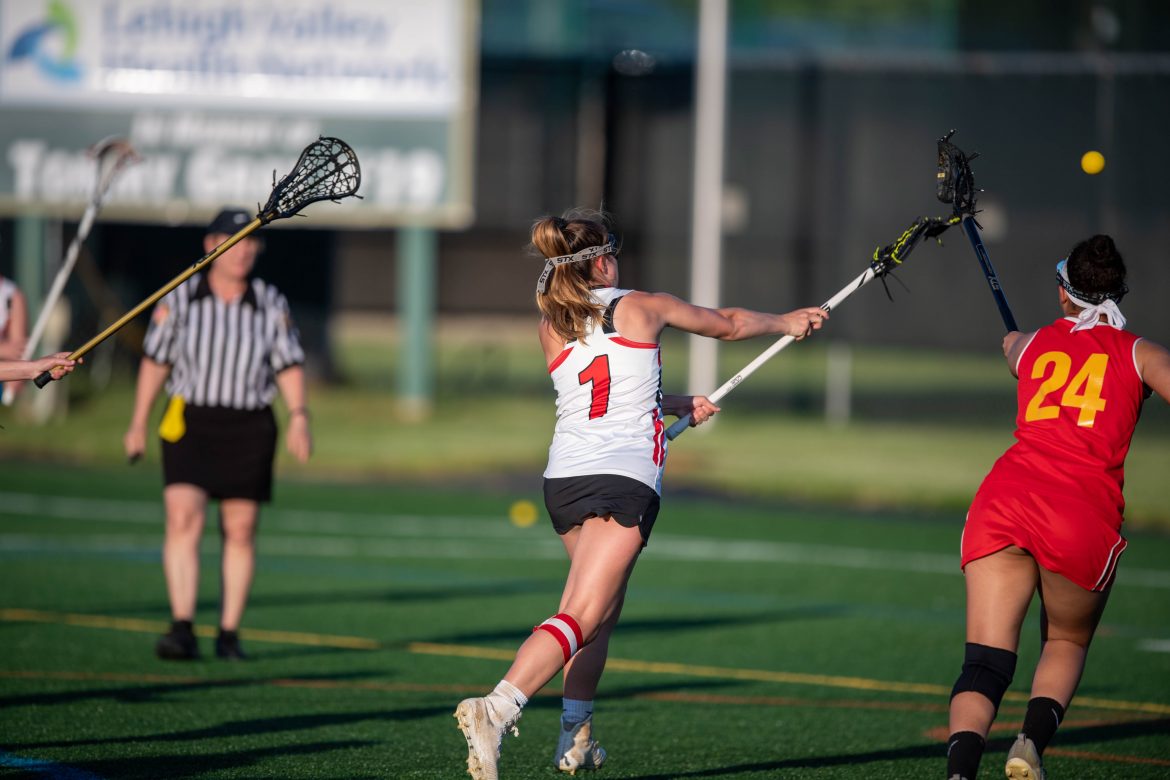 Camryn Zavacky pulls the trigger and fires a shot.

Riding the momentum, the Panthers earned six more 1st half scores from Kiele Riefenstahl, Megan Kane (2), Maria Donahue, Camryn Zavacky and Emerson Shauger.  At the break, Saucon Valley was firmly in control 12-0.  Zavacky’s score at 7:38 made the score 10-0 and activated the mercy-rule. 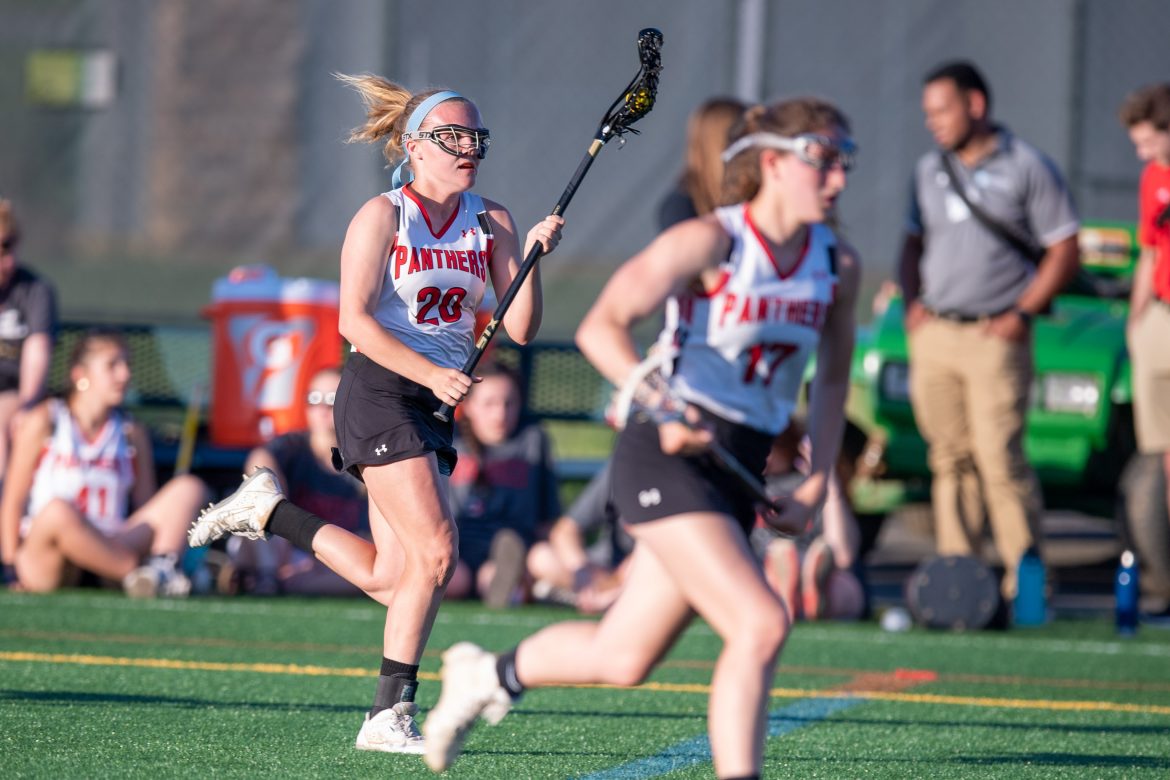 Brooke Riefenstahl (#20) and Maria Donahue (#17) pushing the pace for the Panthers.

To start the 2nd half, the Panthers picked up where they left off by rattling off four straight goals.  Maria Donahue (2), Brooke Riefenstahl and Katherine Naiburg all converted scores to extend Saucon Valley’s lead to 16-0 with about fifteen minutes left to play. 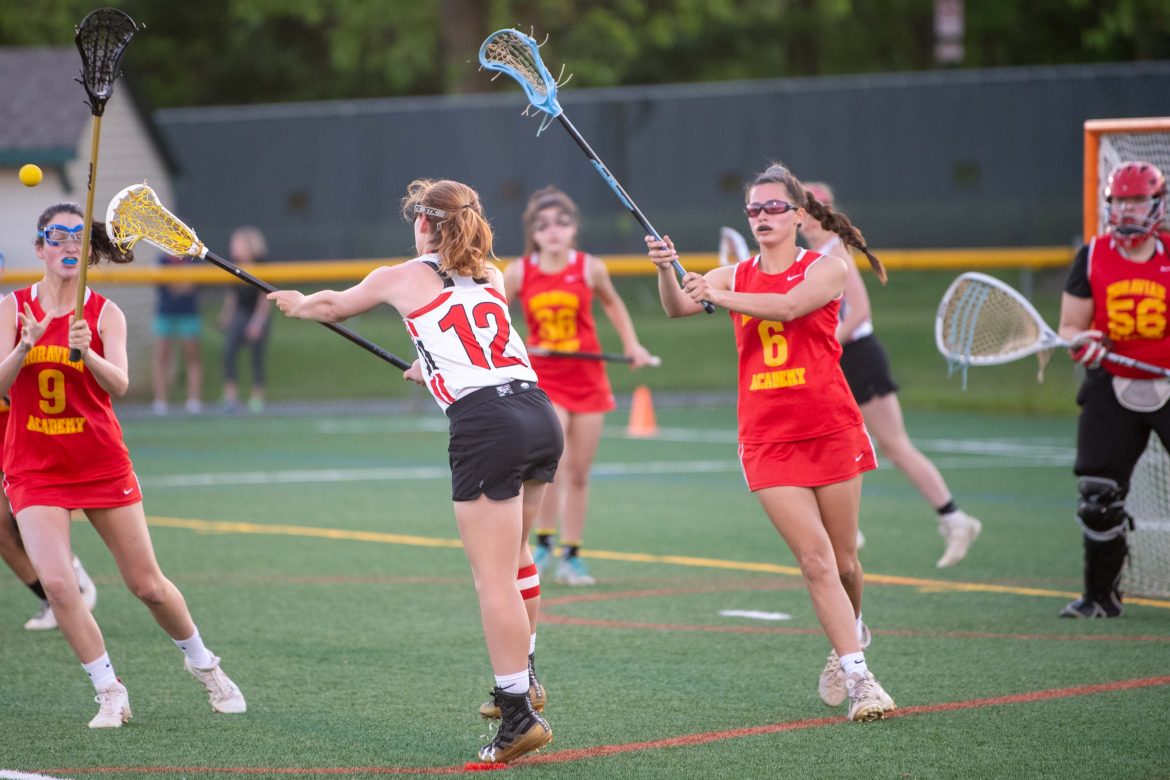 With nine minutes remaining, the Lions finally got on the scoreboard with back to back goals off free starts.  But, the Panthers Emerson Shauger, Siobhan Coakley and Megan Kane closed out all scoring to give Saucon Valley a lopsided 19-2 District XI semifinal victory.  Saucon Valley advanced to the 2019 District XI championship game where they will try to defeat a tough Southern Lehigh Spartan program for the third time this season. 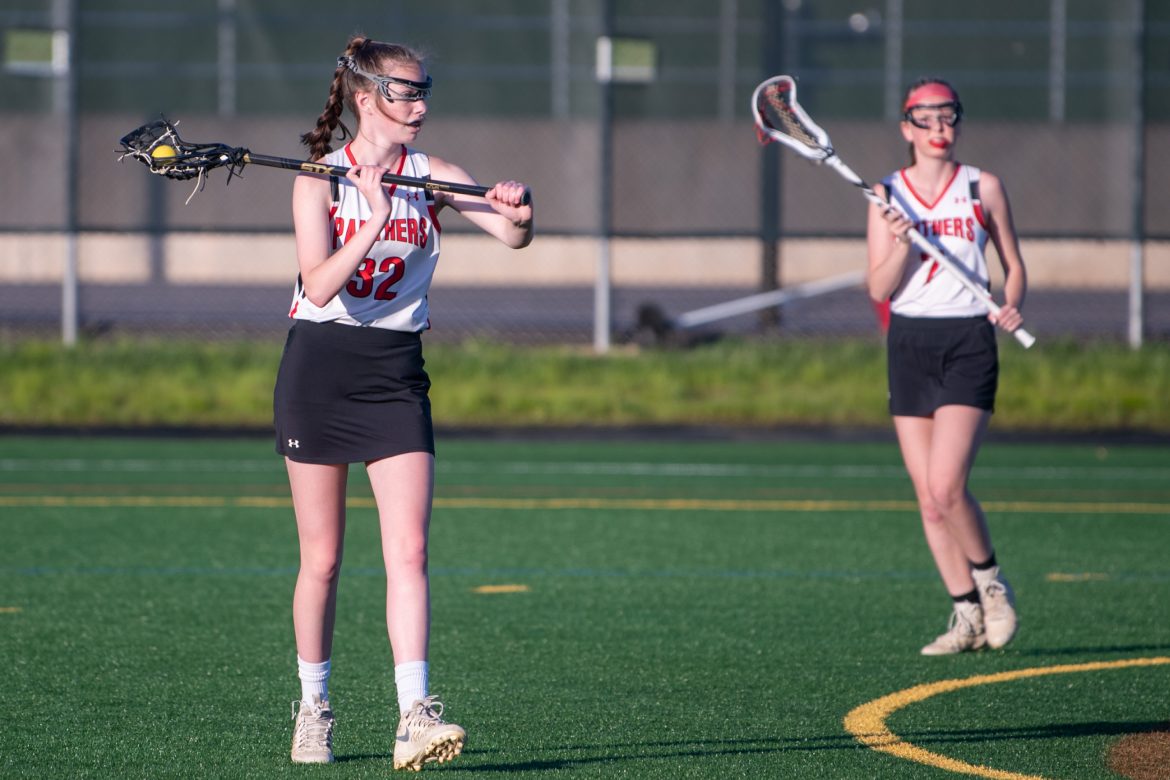 Saucon’s Siobhan Coakley (#32) being patient and distributing the ball to her teammates.

Panther Net-Flicks: Maria Donahue and Megan Kane led all scorers with four goals each.  Katherine Naiburg, Kiele Riefenstahl, Emerson Shauger and Camryn Zavacky each had two scores. Siobhan Coakley, Katie Marker and Brooke Riefenstahl all added a point for the Panthers.  The “Great Wall of Aud” ( goalkeeper, Audrey Holland) was credited with eight saves in net for Saucon Valley. 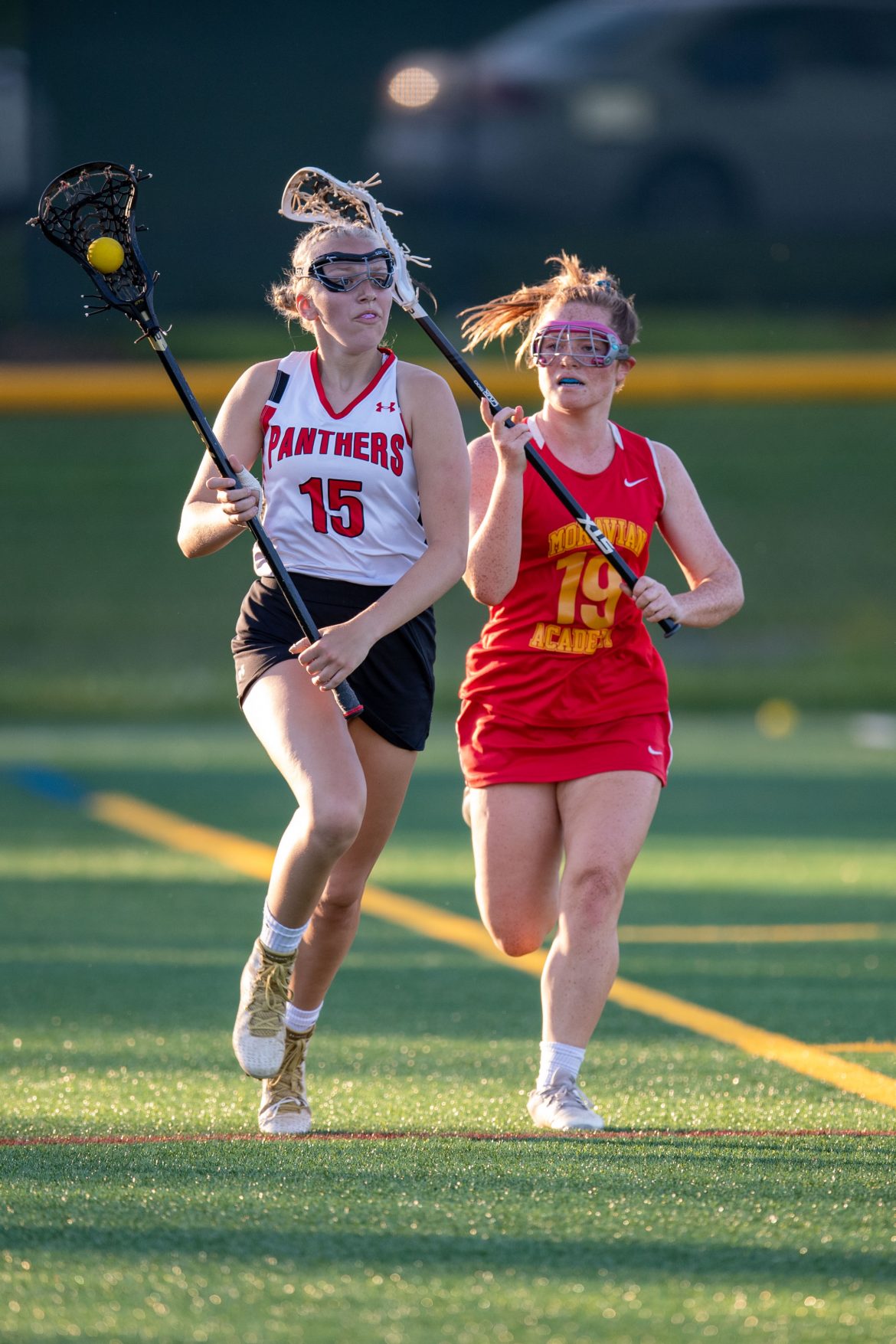 Ally Royse (#15) and the Panther defense played an outstanding game for the Panthers.

UP NEXT:  #1 Saucon Valley (16-1) will play #2 Southern Lehigh (12-4) in the 2019 District XI championship game at DeSales University on Wednesday, May 22. The Saucon Valley Panthers look to win their third consecutive District XI title. 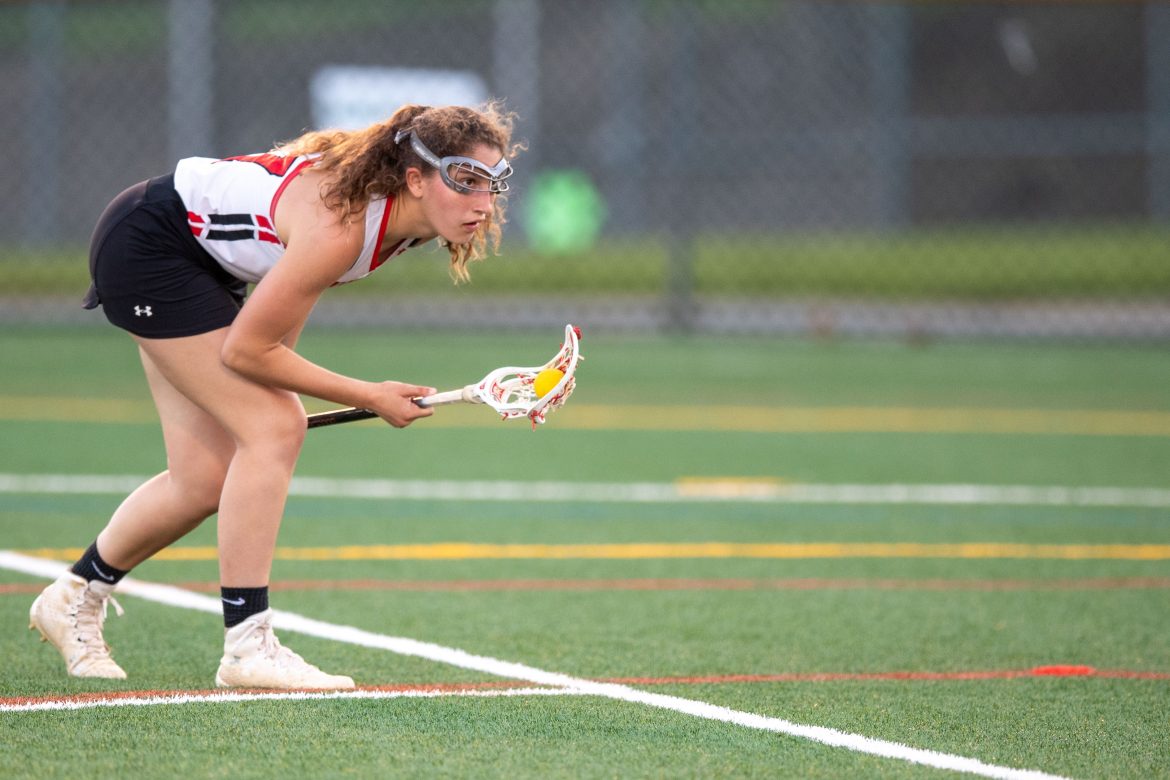 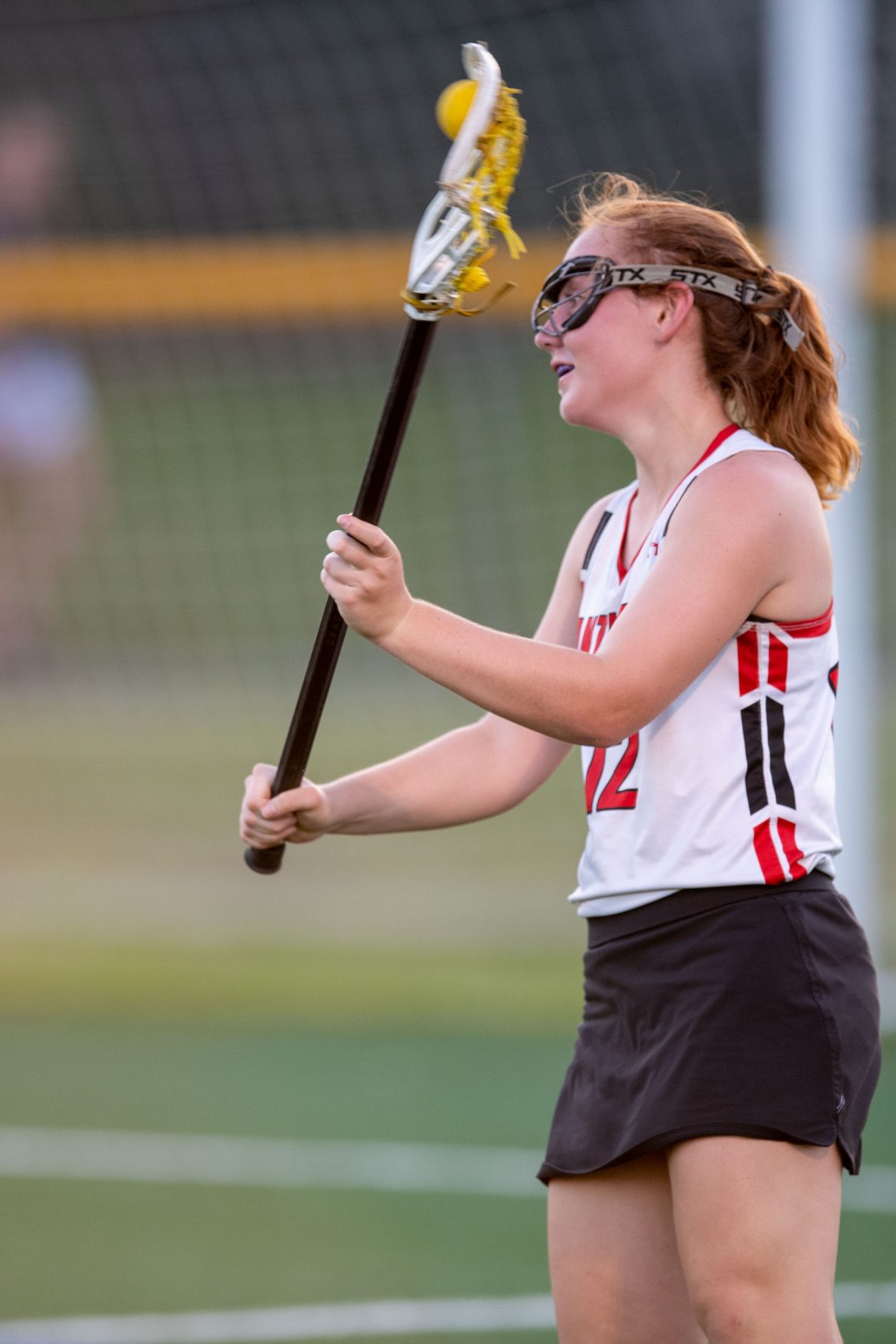 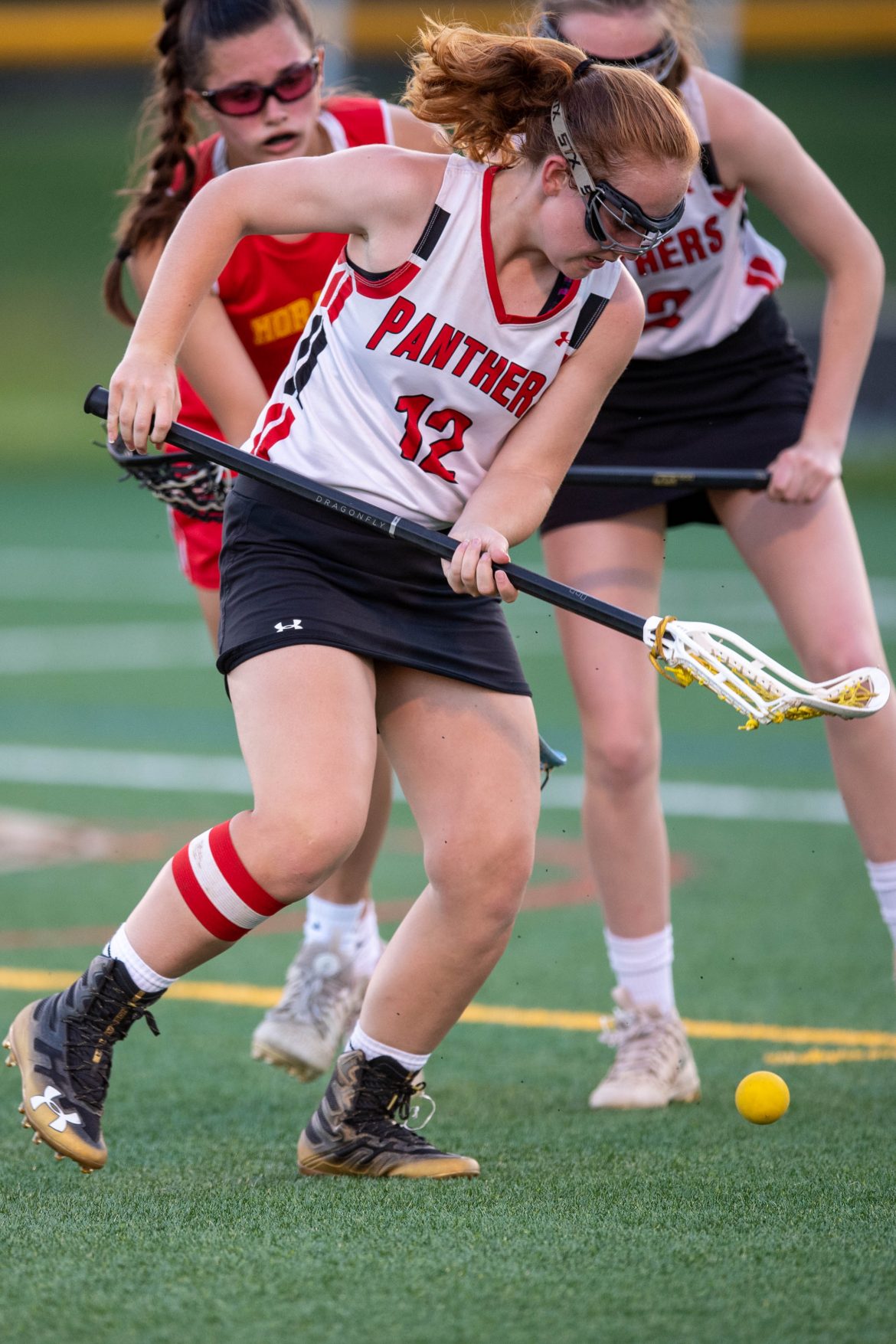 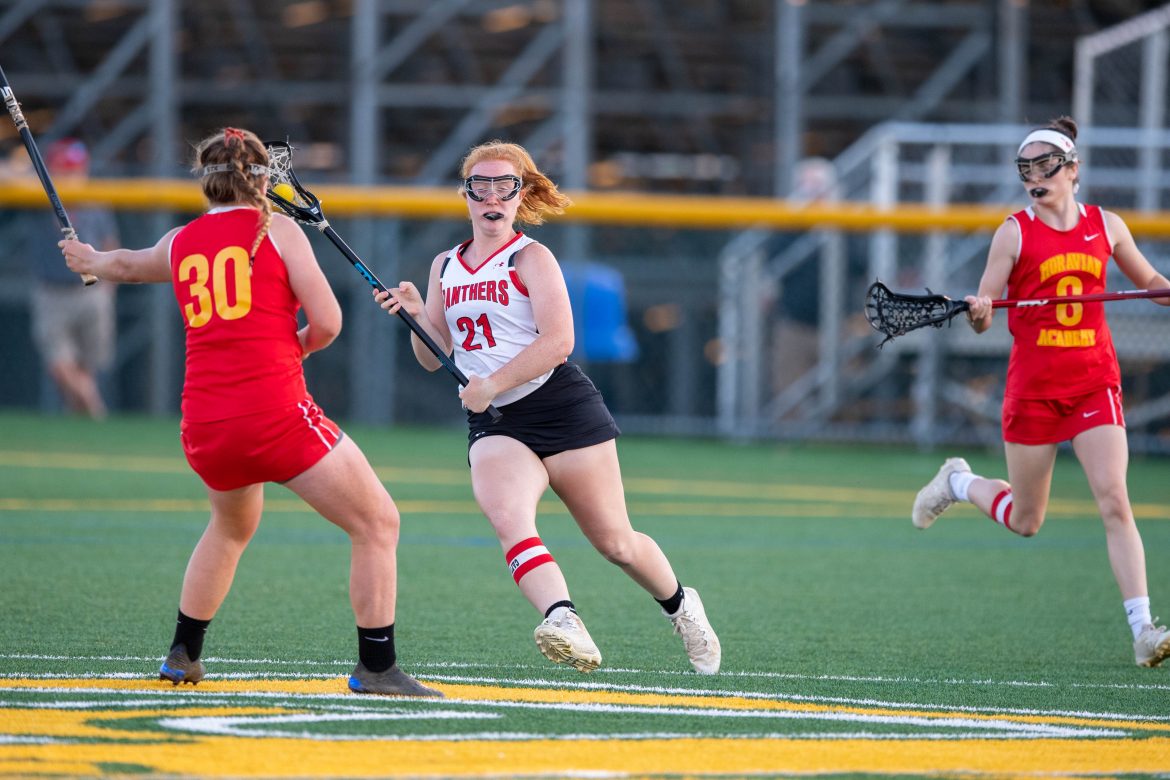 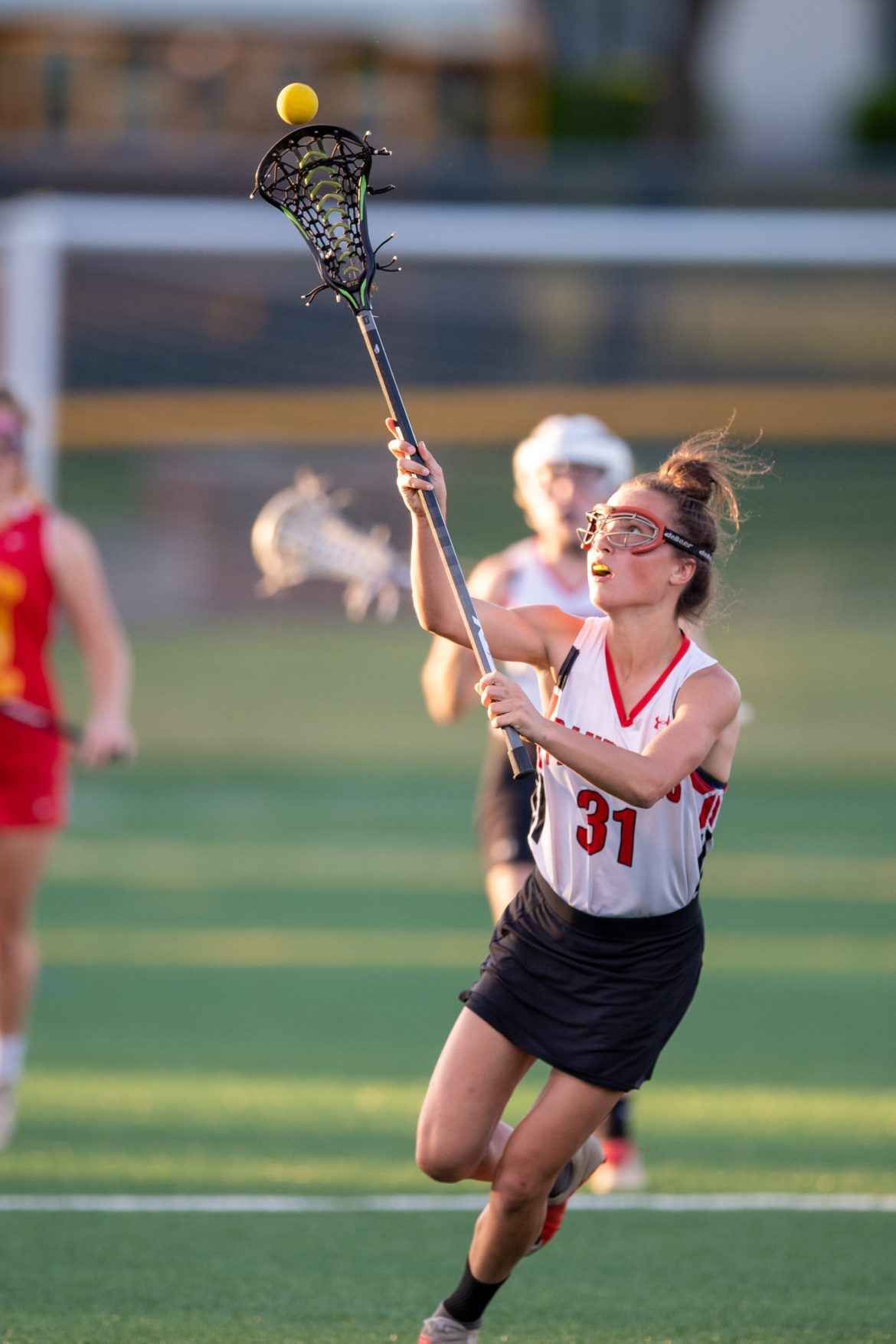 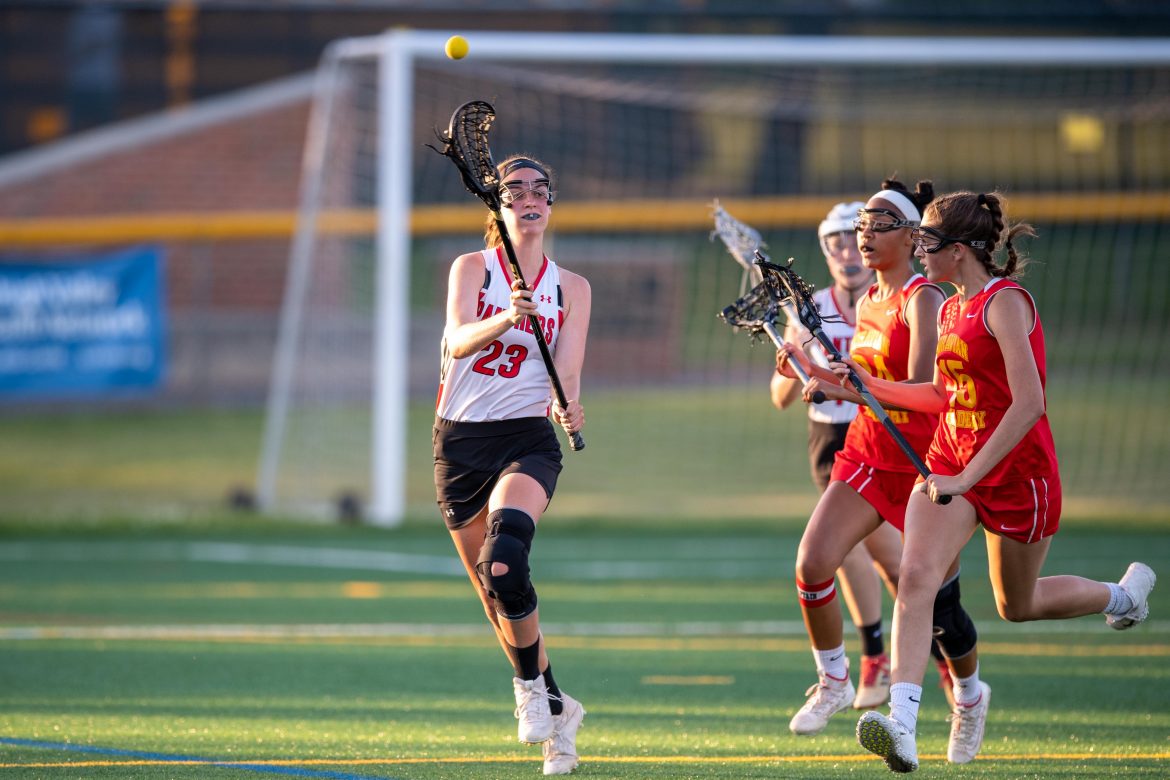 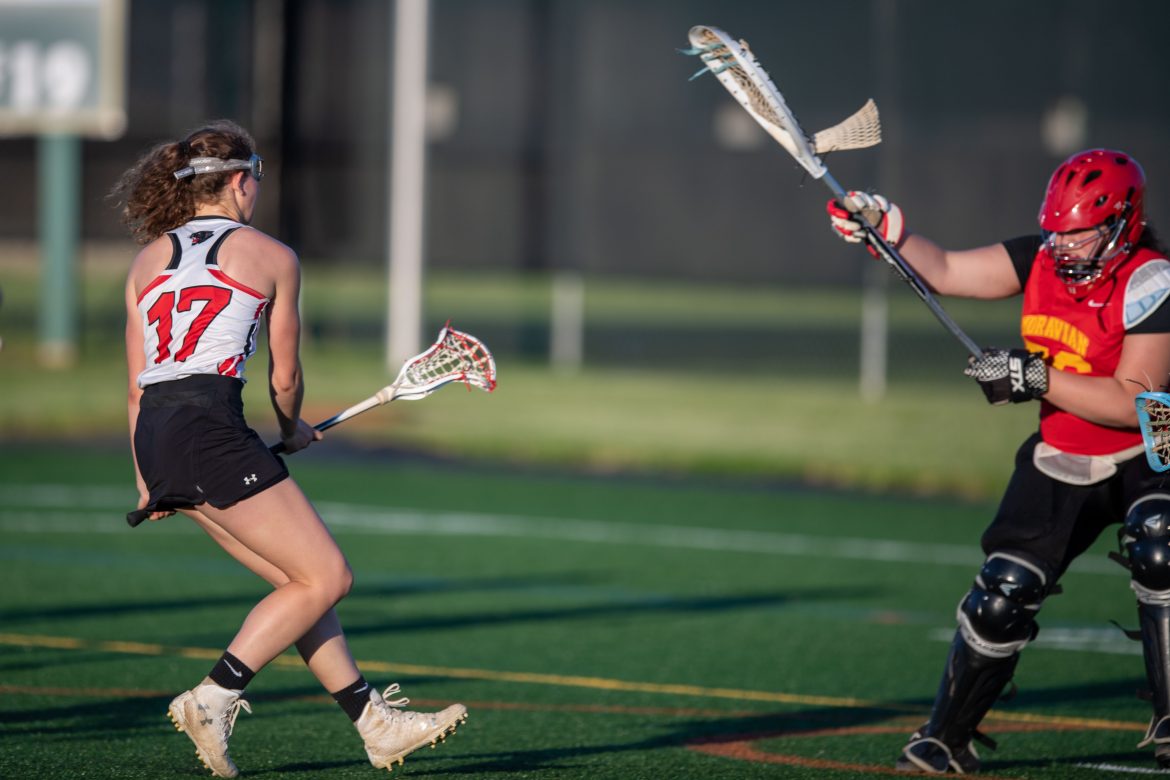 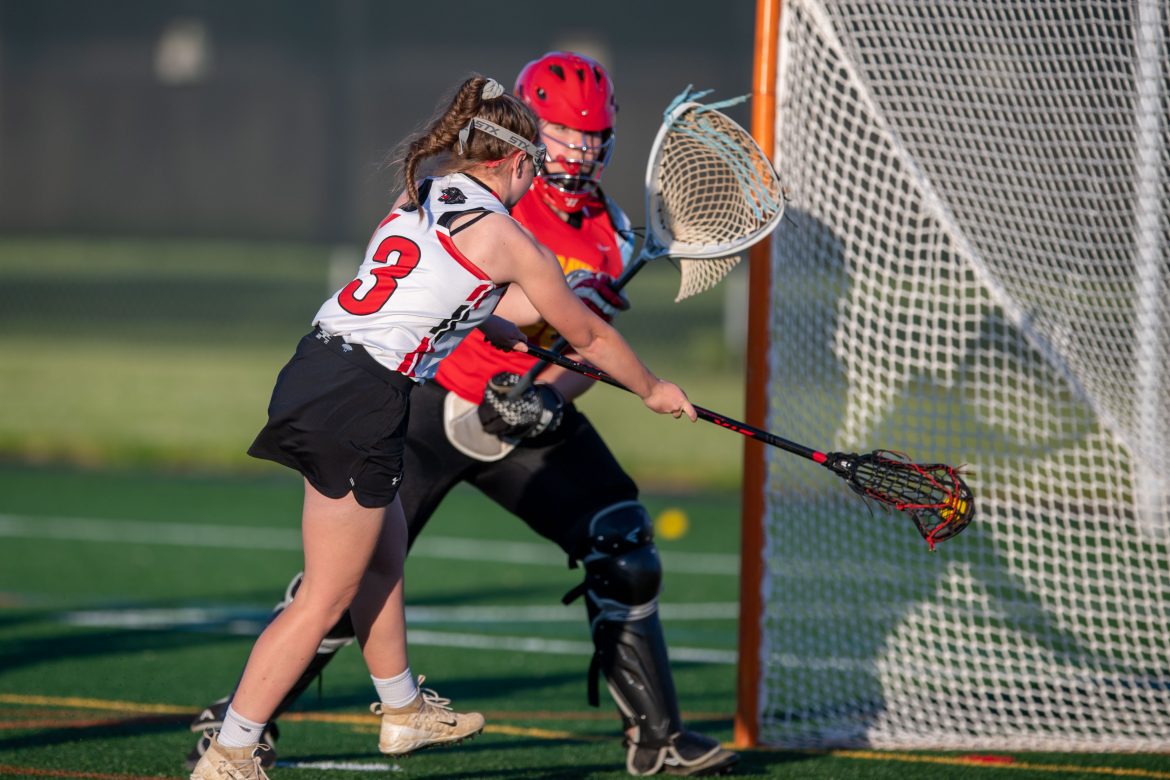 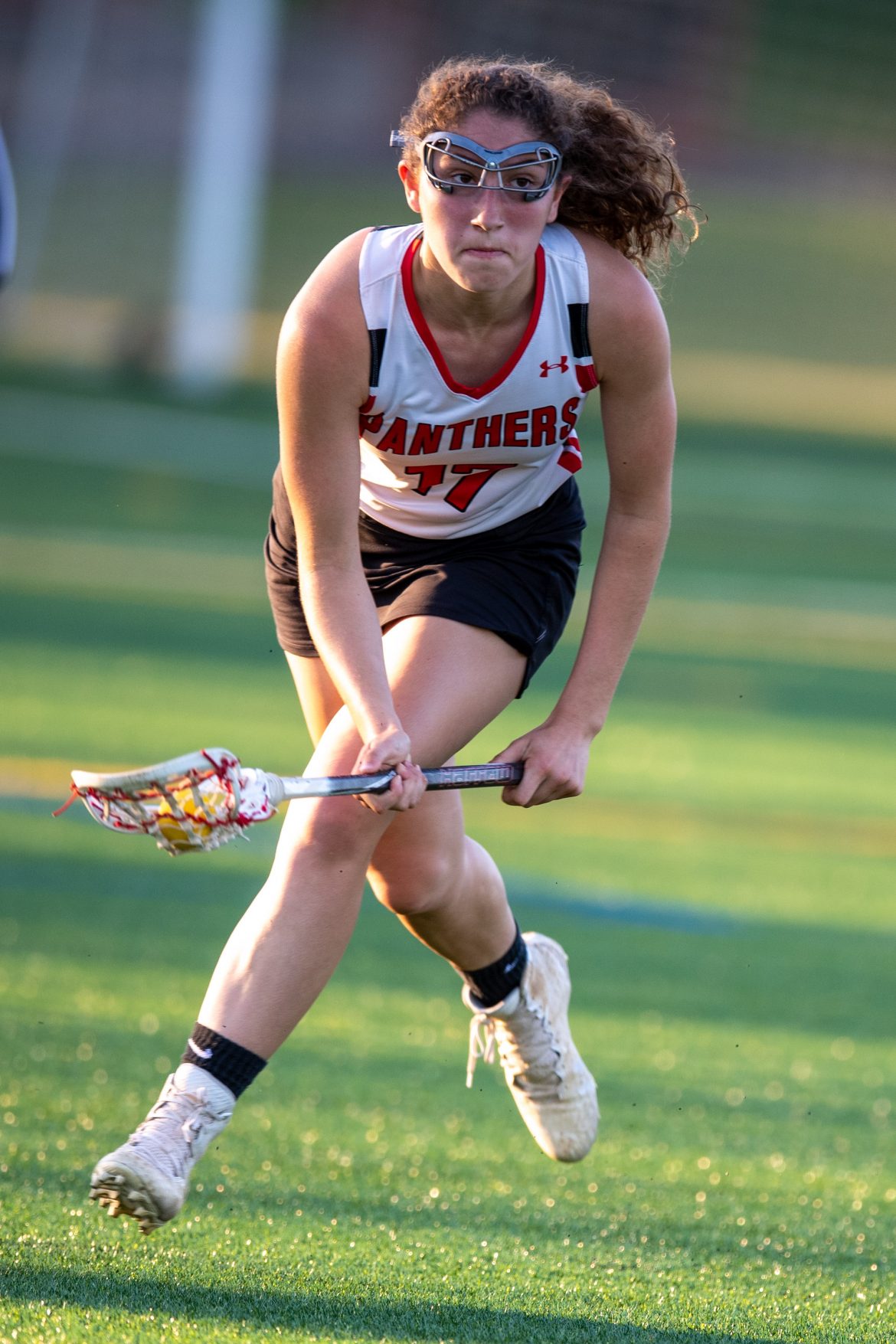 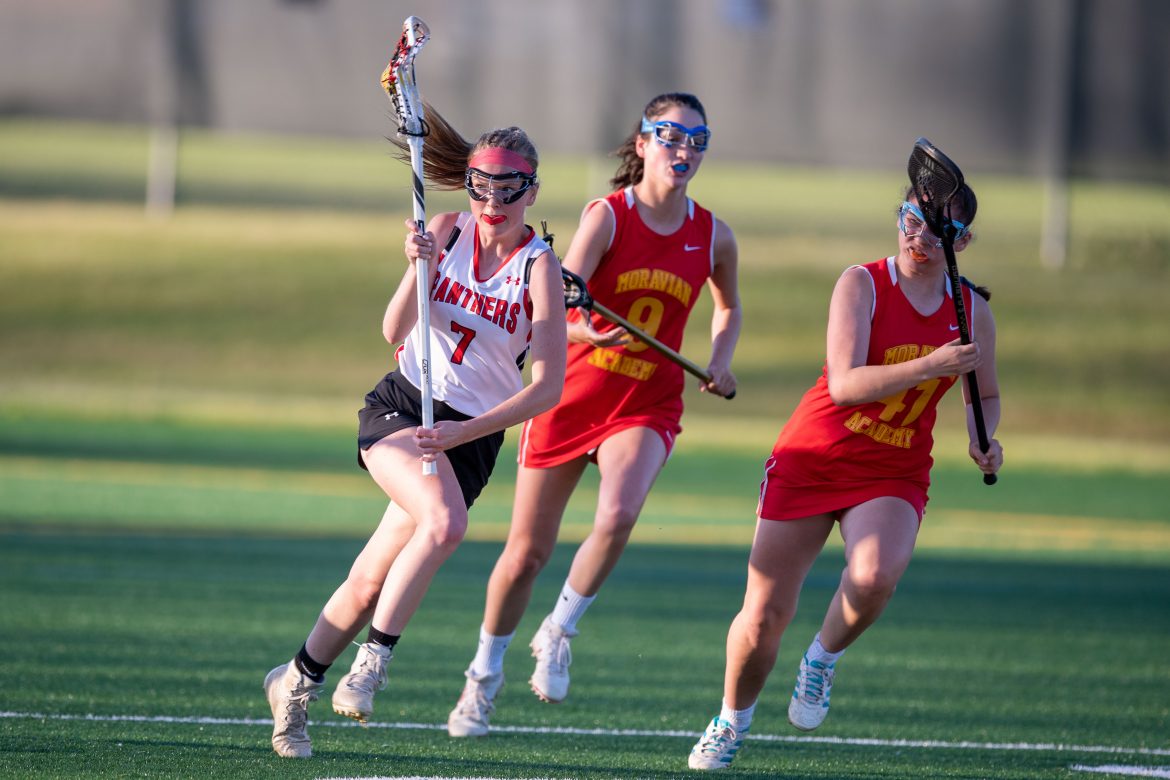 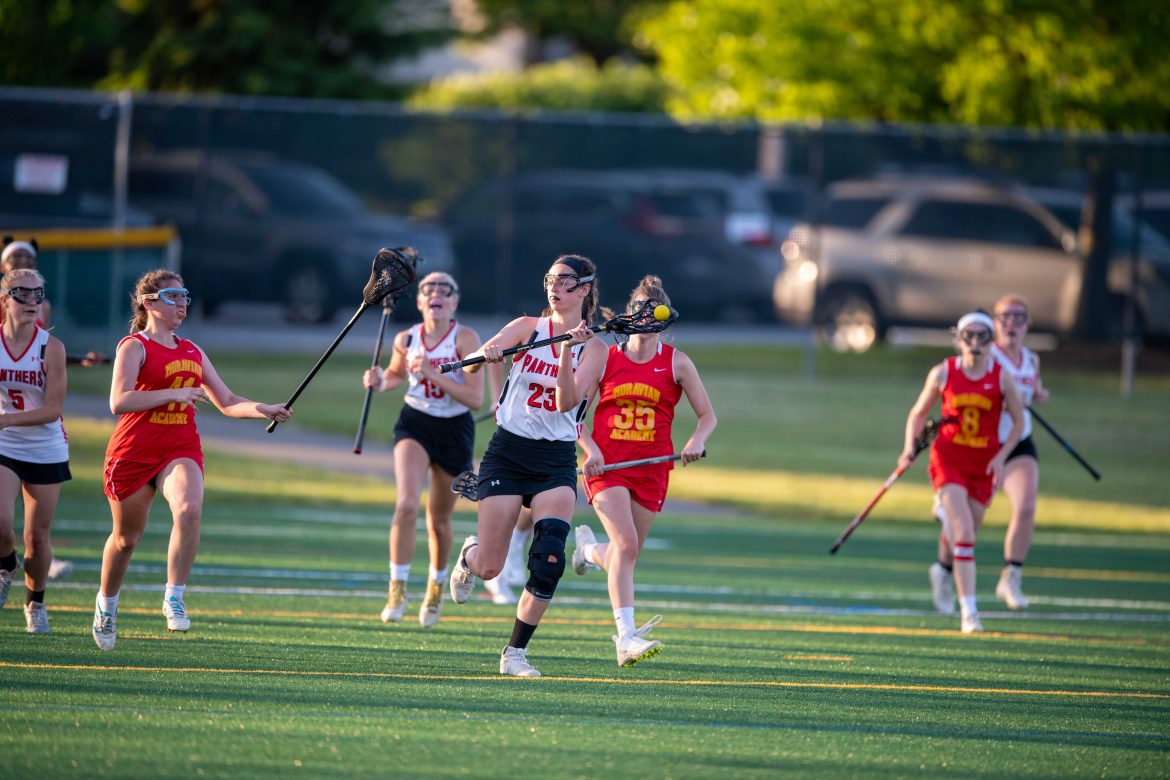 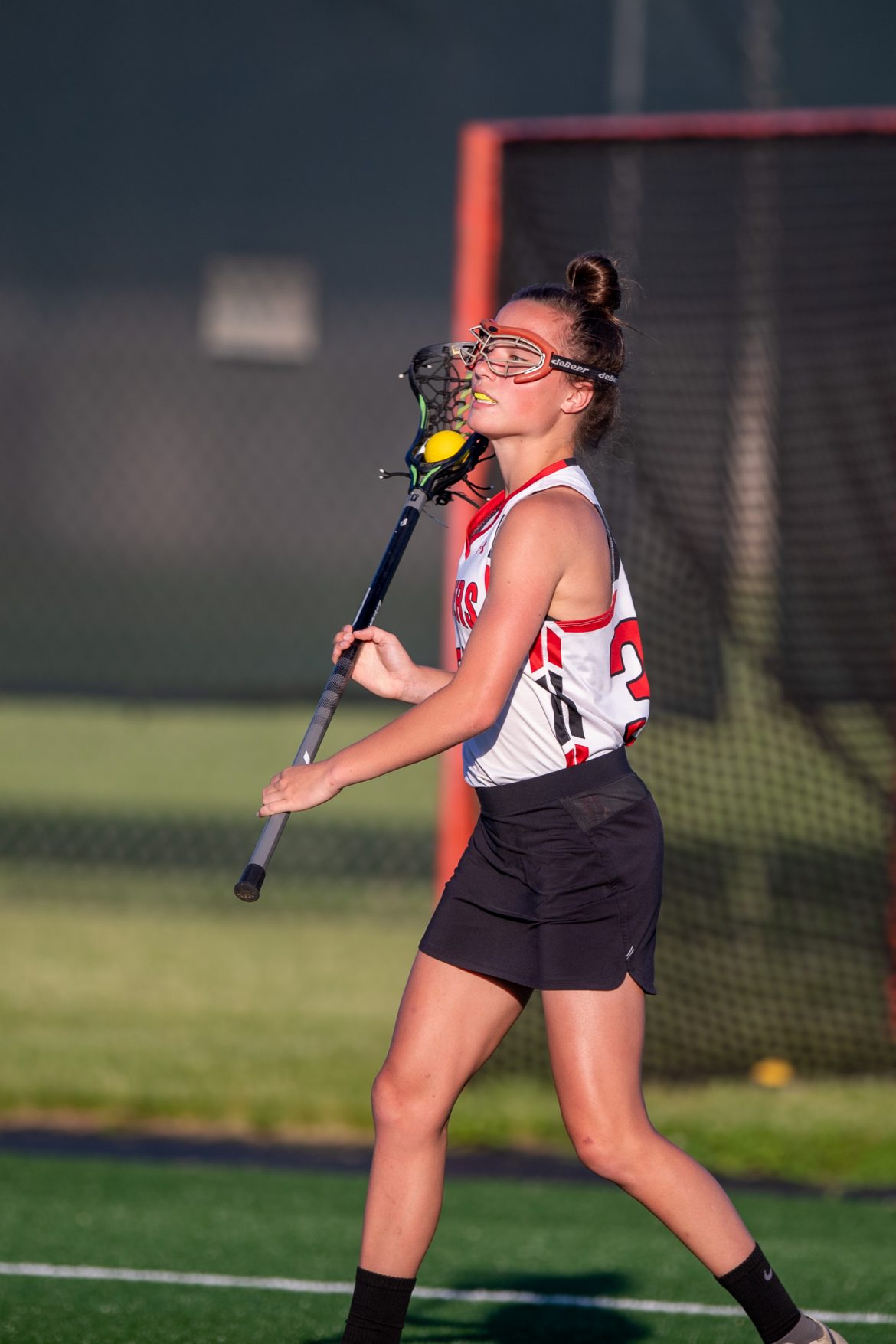 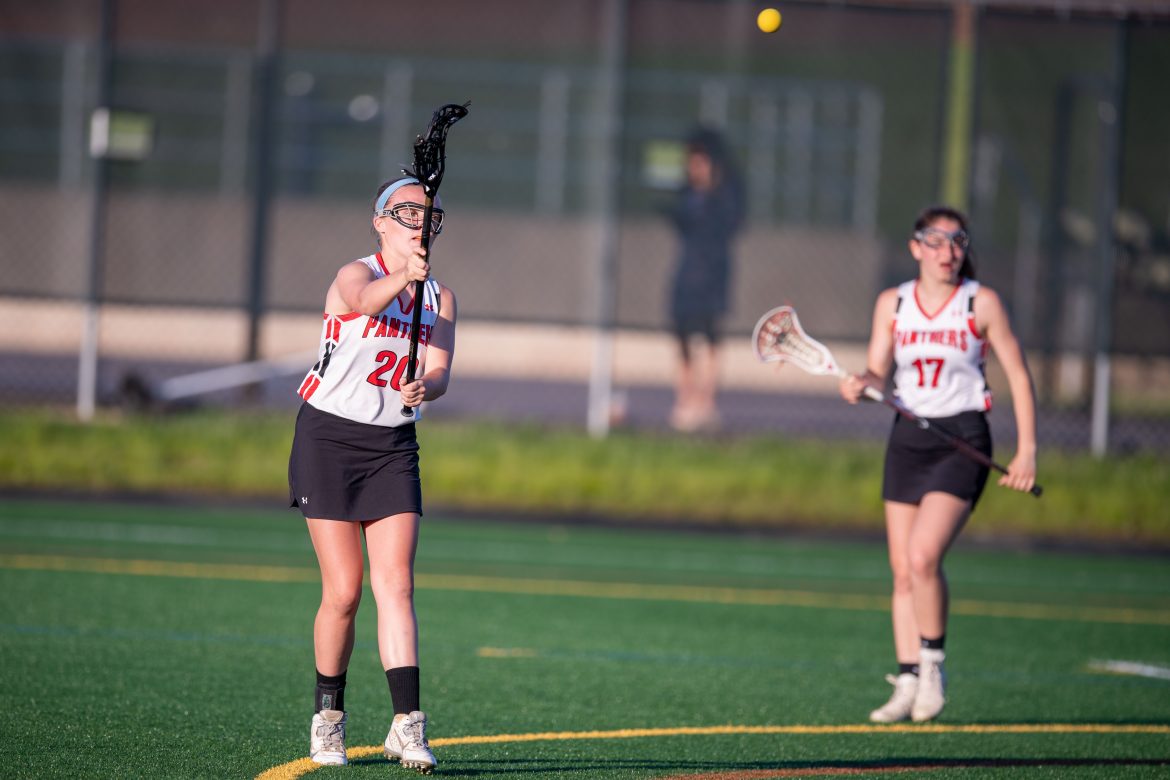 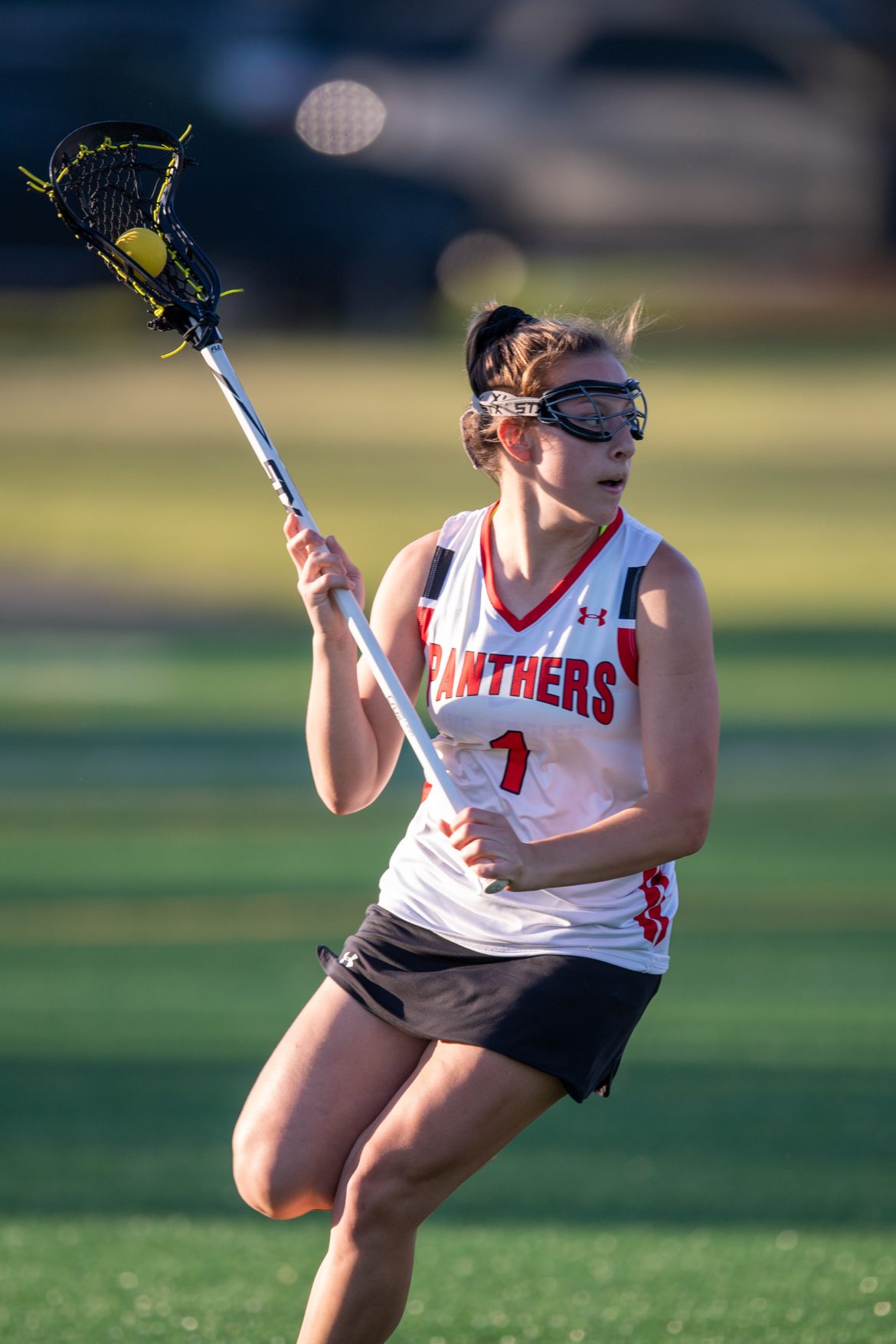 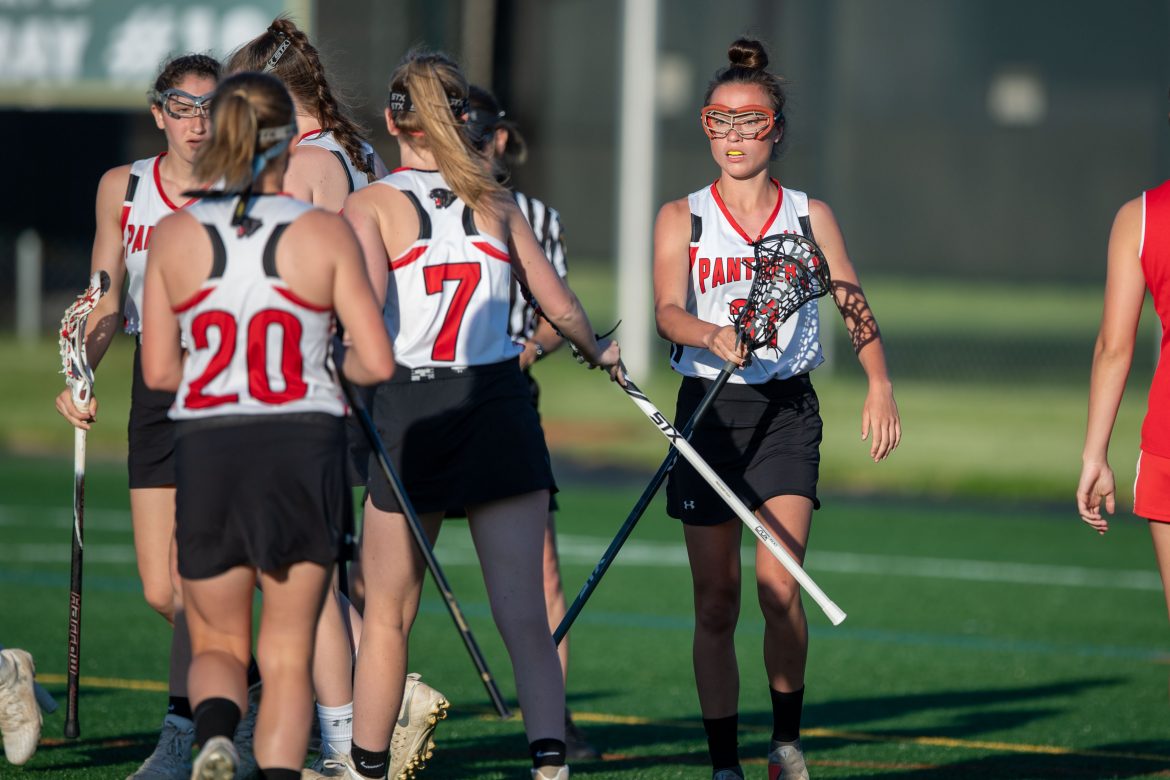 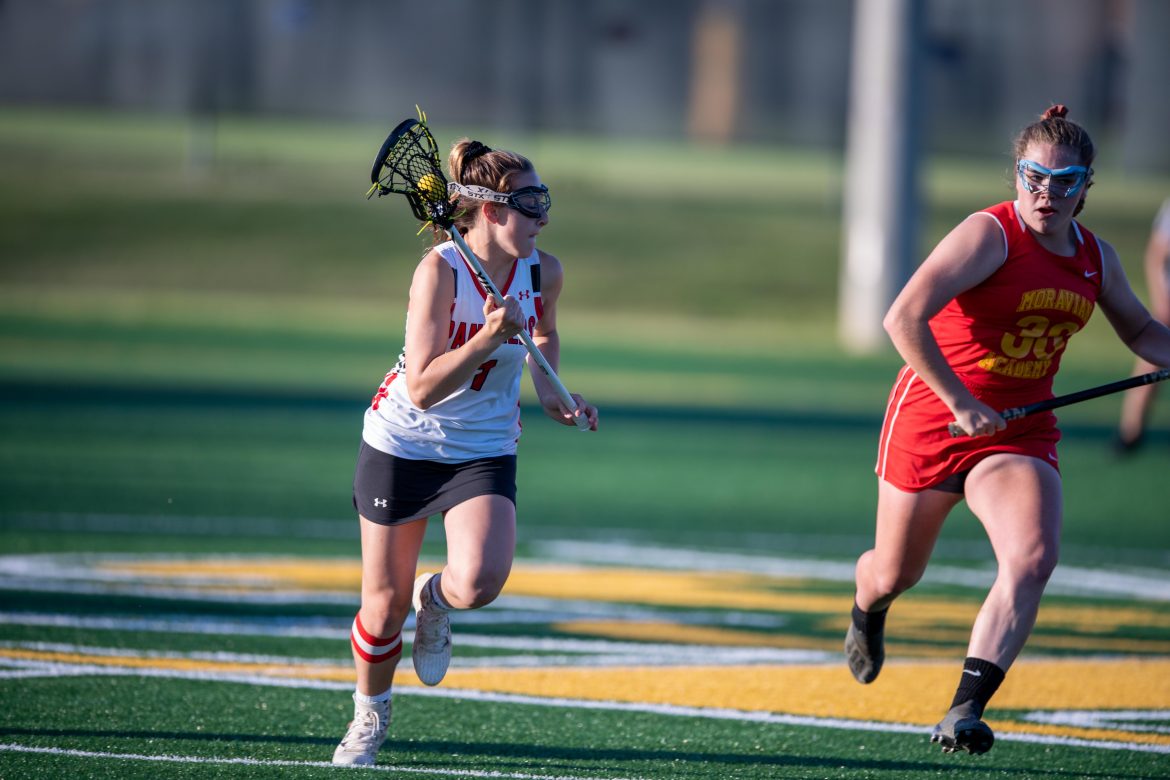 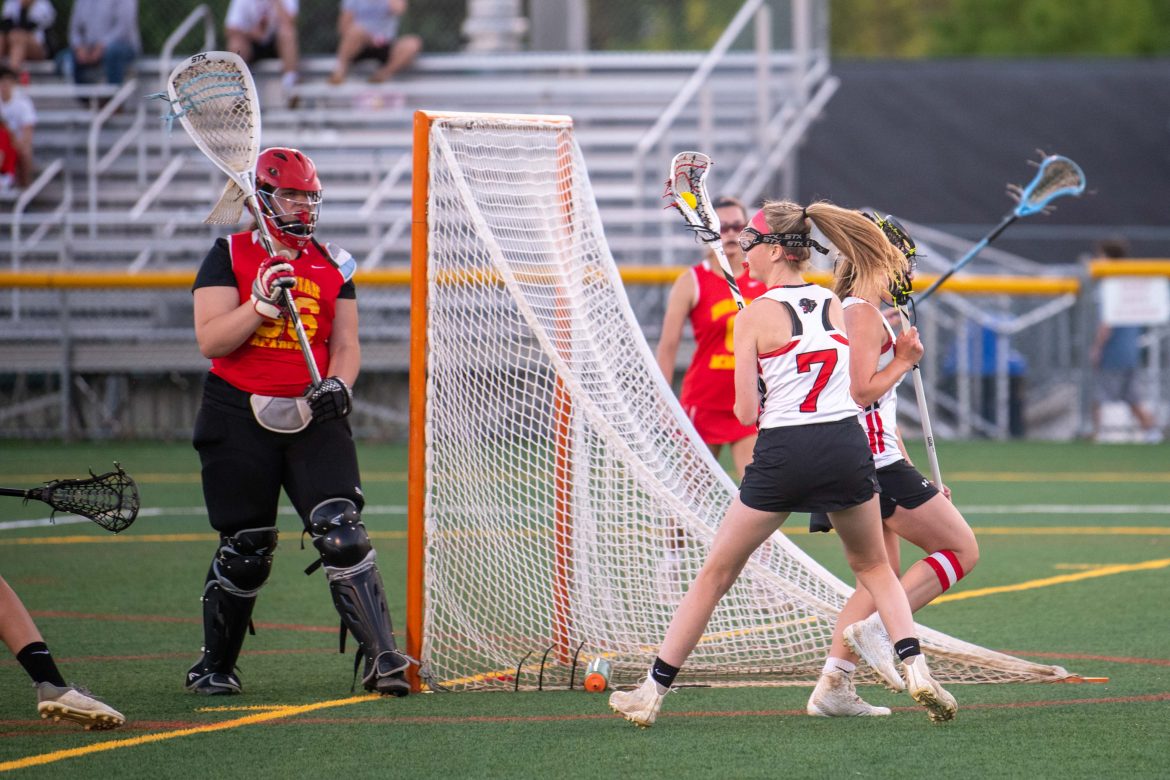 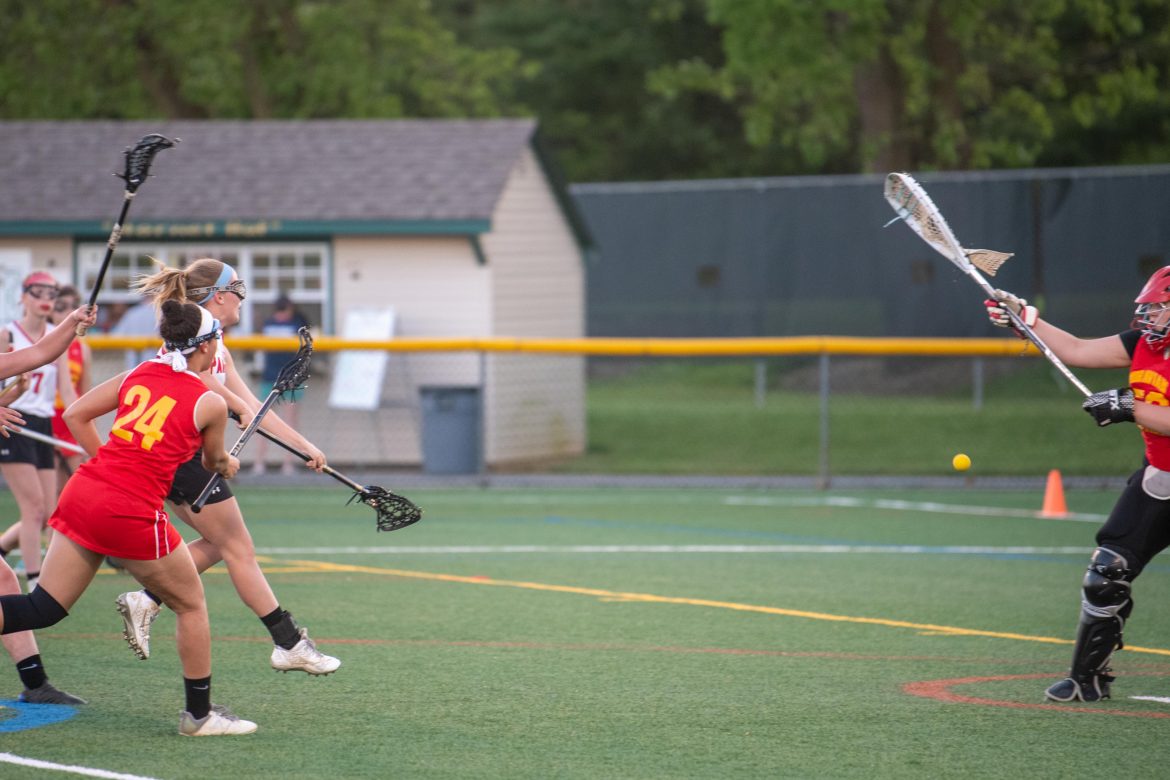 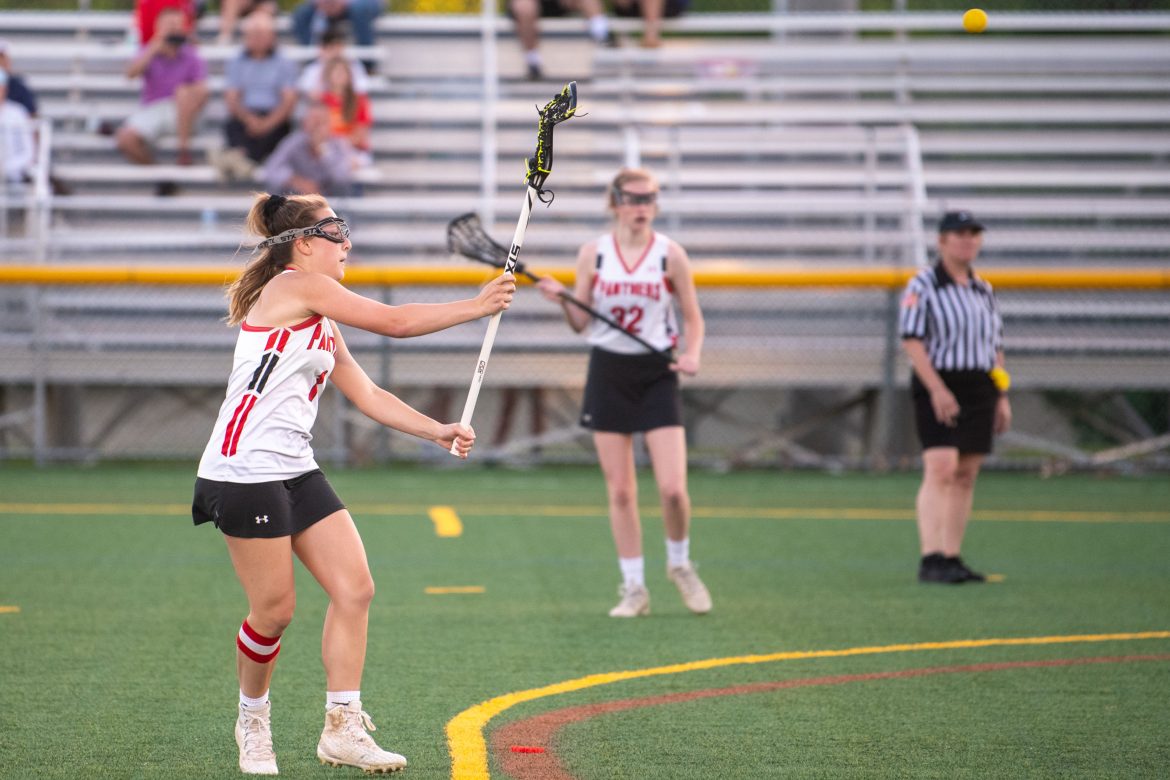 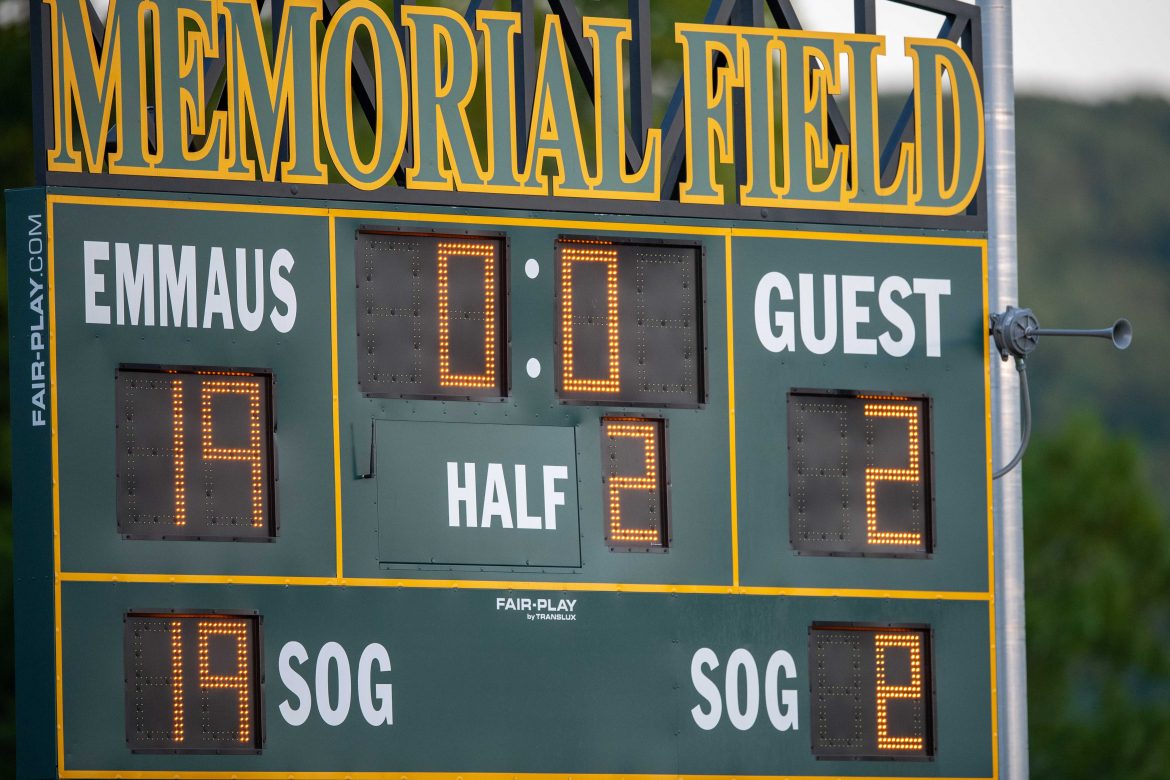