Hellertown Borough Council Monday voted to take steps toward enacting a ban on planting so-called “running bamboo,” which is a highly-invasive variety of the plant, and property owners who already have it won’t necessarily receive a pass under a new or updated ordinance.

Council members agreed that anyone who already has planted the type of bamboo borough zoning officer Kris Russo said can penetrate blacktop and grow two or three inches in a single day should be held accountable if it invades a neighboring private or publicly owned property.

That accountability would entail bearing the financial responsibility for the removal of the invasive bamboo, and if a property owner can’t or won’t pay for its removal, Russo suggested the borough should be able to extract it and then put a lien on the property in order to recoup the cost of doing so.

Boos said the best way to contain running bamboo is by trenching around it to a depth of up to 36 inches. The trench barrier needs to be lined with concrete, high density polyethylene (HDP) or some other type of nearly impenetrable material, however, even these precautions will not guarantee the containment of running bamboo, Boos said.

Once it becomes rootbound, the plant “could jump the fence, so to speak,” he told council.

Another resident told council that several years ago he spent a summer removing a stand of bamboo he’d planted to create a privacy barrier, after it spread onto a neighbor’s property. He said the experience made him wish he had never planted it.

Council voted 6-0 to have solicitor Michael Corriere and borough staff draft an updated or new ordinance that will address all of the concerns raised about the bamboo. Councilman James Hill was absent.

The issue of bamboo came up at a council meeting in May, after borough manager Cathy Hartranft said a bamboo patch behind a property along the Saucon Rail Trail has become invasive. 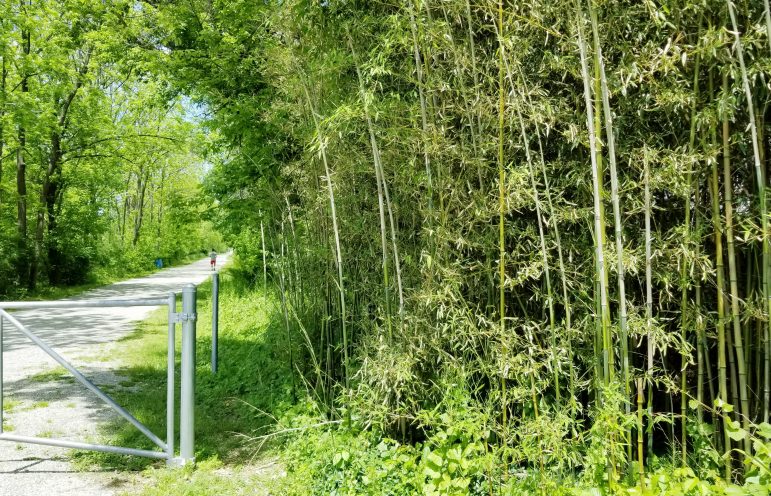 Bamboo grows along the Saucon Rail Trail in Hellertown.