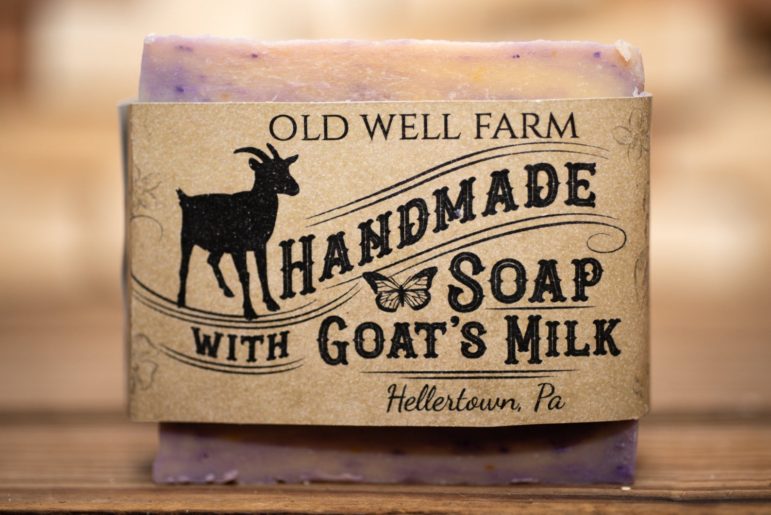 It’s a product we all need, but perhaps don’t always think about a lot. The owners of Lower Saucon Township’s Old Well Farm, however, are putting a lot of thought into soap, which is why they’re succeeding at making it the old-fashioned way, using lye and milk from Nigerian dwarf goats they raise.

Beata and Ty Johnson started their modest soap-making business on Sherry Hill Road without knowing a whole lot about goats or traditional soap-making, although Ty has a background in dairy farming and Beata is a life-long lover of animals. 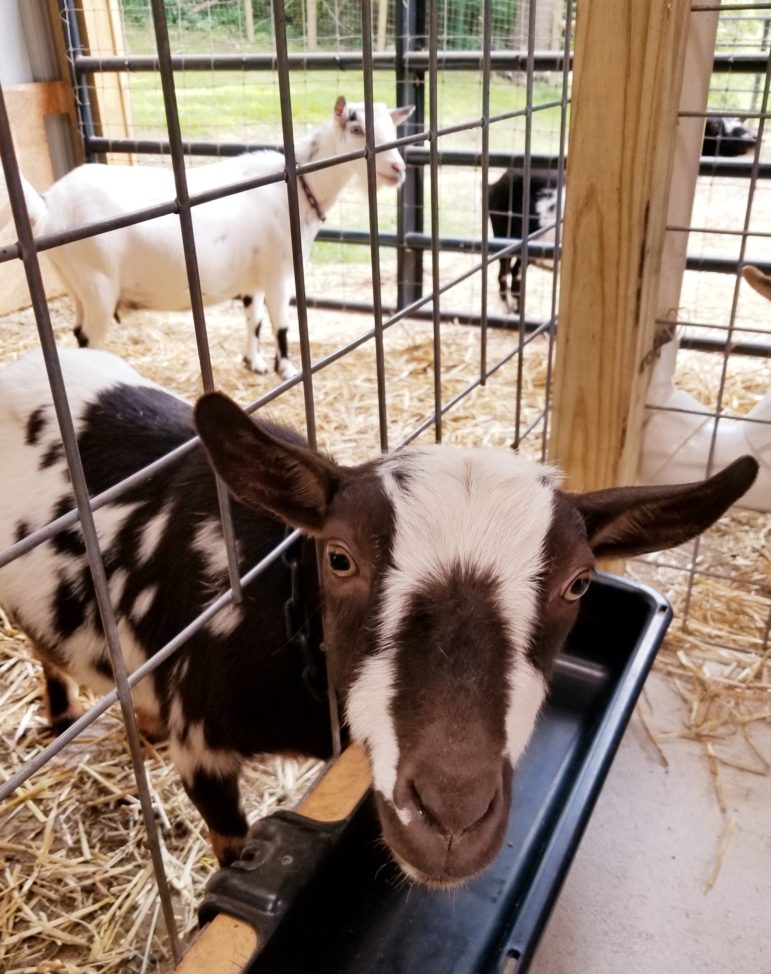 The 10 or so Nigerian dwarf dairy goats at Old Well Farm in Lower Saucon Township live in a custom-built barn where they munch on hay and socialize with each other as only goats can do.

After purchasing their pedigreed dairy goats, which they also breed, they began to develop their business with an emphasis on the careful production of scents that will complement the soap’s all-natural properties.

Some of their most popular scented soaps so far include cherry almond and honey oatmeal, and for fall they are producing seasonal scents which will soon be ready, including Autumn Fig Harvest, Apple Sage and pumpkin.

Why is goat’s milk used as an ingredient in soap?

According to the Johnsons, the milk produced by lactating goats has properties that have made it a popular addition to soap for centuries. For example, the butterfat that’s naturally found in goat’s milk helps to fill in small cracks in the skin, which seals in moisture and makes it softer.

Old Well Farm’s soaps are also made without any added preservatives or chemicals, which may make them a good choice for individuals with sensitive skin or skin conditions such as acne or rosacea.

“This is what I love doing,” Beata said during a recent visit to the farm, which is named for a stone well on it that dates to the 1800s. “I wouldn’t want to be in an office. I love working outside.”

The couple’s small goat herd is housed in a cozy, modern barn built by Ty which includes a wooden platform where the goats that are currently “in milk” are led twice daily and milked using an automatic milking machine. 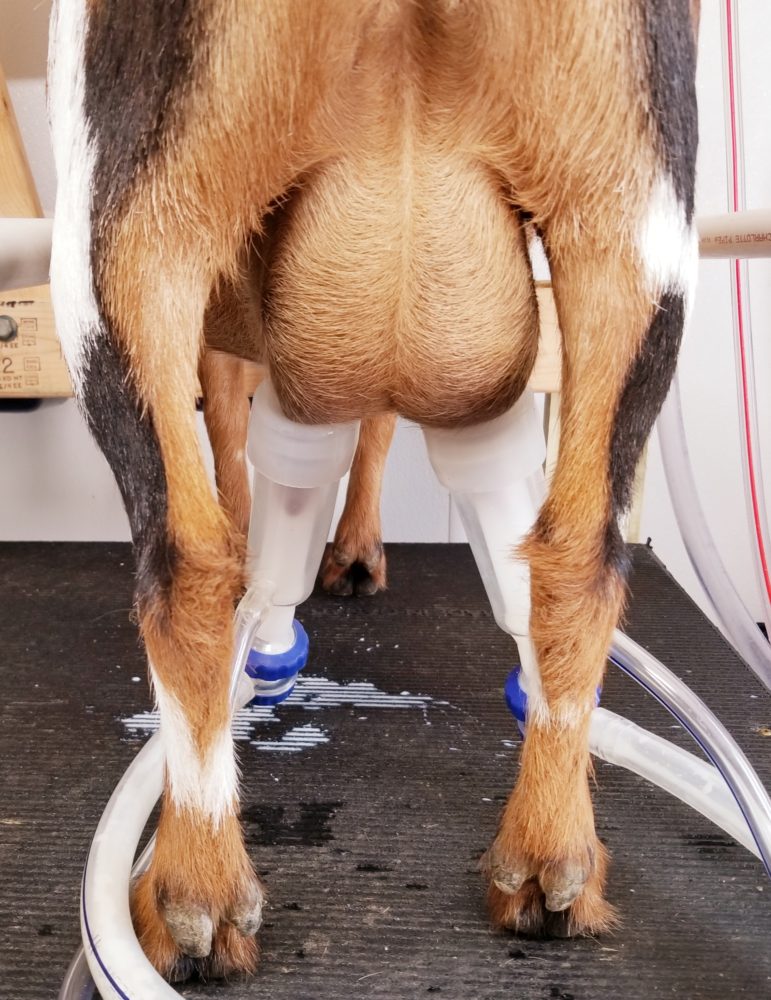 One of the two goats currently producing milk at Old Well Farm is attached to an automatic milking machine twice a day.

Although hand-milking is sometimes done, it can introduce dirt and hair into the milk, which must then be removed during the soap-making process.

The two goats currently in milk–who weigh between 50 and 75 pounds each–together produce enough milk to fill one large Mason jar at each session.

The milk is then refrigerated and prepared for the introduction of lye–an essential ingredient in making soap–and the oils that will give each loaf its scent, before it’s finally cut into individual bars and cured for several weeks. 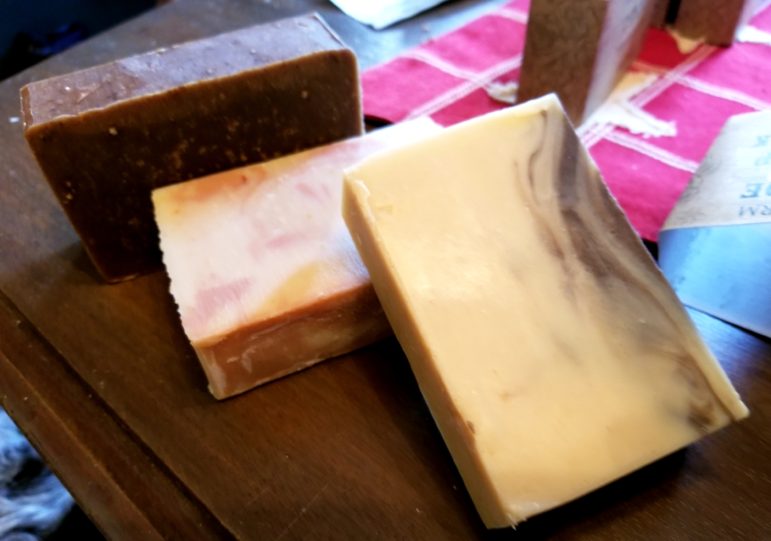 Several bars of Old Well Farm goat’s milk soap await labeling. The soap is sold at the farm on Sherry Hill Road, at the Rose Garden Farmers’ Market in Bethlehem, and elsewhere.

Some of their other soap scents currently available include Cactus Flower, Moroccan Mint, Baby Powder, Haircut And A Shave, Energy and Lavender.

The soaps are available for purchase at the farm, which is located at 4000 Sherry Hill Road, Hellertown, and at Arnold’s Market at 1766 Friedensville Road, Bethlehem. Beata said she will also deliver purchases locally if asked.

Old Well Farm has expanded beyond the Saucon Valley with a stand at the weekly Bethlehem Rose Garden Farmers Market at Union Boulevard and Eighth Avenue, which is open Saturdays from 9 a.m. to 1 p.m., through Oct. 12. And the Johnsons have also sold their soap at community events such as Hellertown-Lower Saucon Community Day, which was held last month in Dimmick Park. They have launched a website for the farm, and the Johnsons also have an online soap store on the maker website Etsy.

Each bar of Old Well Farm’s all-natural goat’s milk soap sells for $6, with additional savings available when more than one bar is purchased. Two bars are $11 and three bars are $16, and a three-bar purchase includes a complimentary “soap sock” made from agave fiber, which acts as a kind of loofah when a bar of soap is placed inside it and water is added. 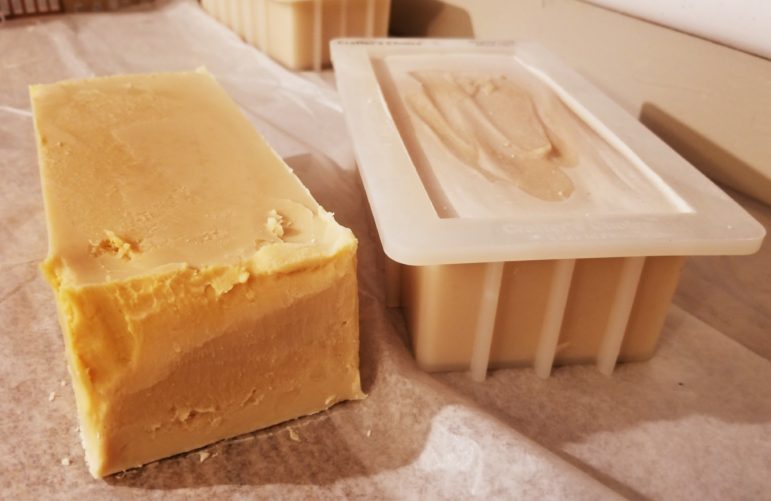 The soap that is hand-made by Beata Johnson sets in loaf pans before being sliced into individual bars.

Beata said that in the future, she hopes to sell goat’s milk and cheese–known as chevre–as well as other food items made from the milk, however they will need to obtain a license from the state Department of Agriculture first.

In the meantime she is happy caring for their herd, which she said continues to grow with the birth of kids sired by Old Well Farm’s resident billy goat throughout the year.

“Goats are like potato chips,” she laughed. “You can’t have just one.” 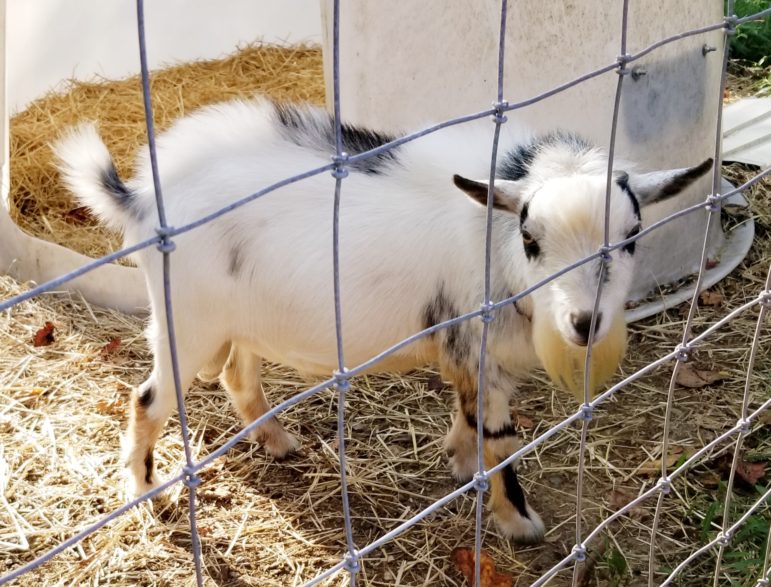 The resident billy goat at Old Well Farm lives in an outside enclosure away from the barn where the dairy goats live. 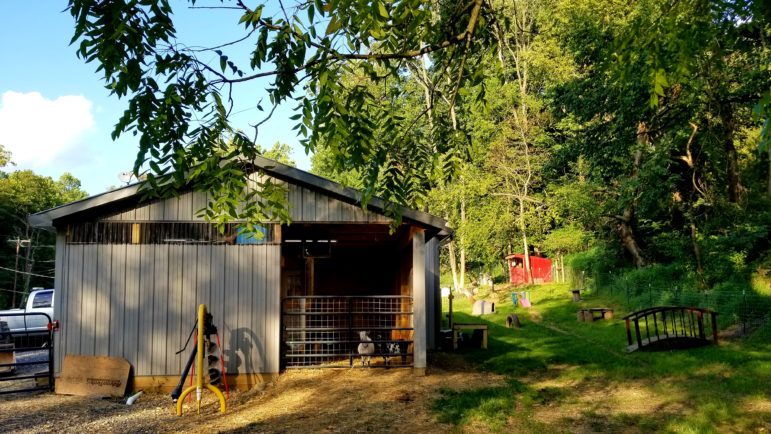 The Johnsons said they have a good relationship with their neighbors, who include the King family. The Kings own Blue Barnyard on Alpine Drive in Lower Saucon Township, and as local farmers they do what they can to help and support each other, Beata Johnson said. 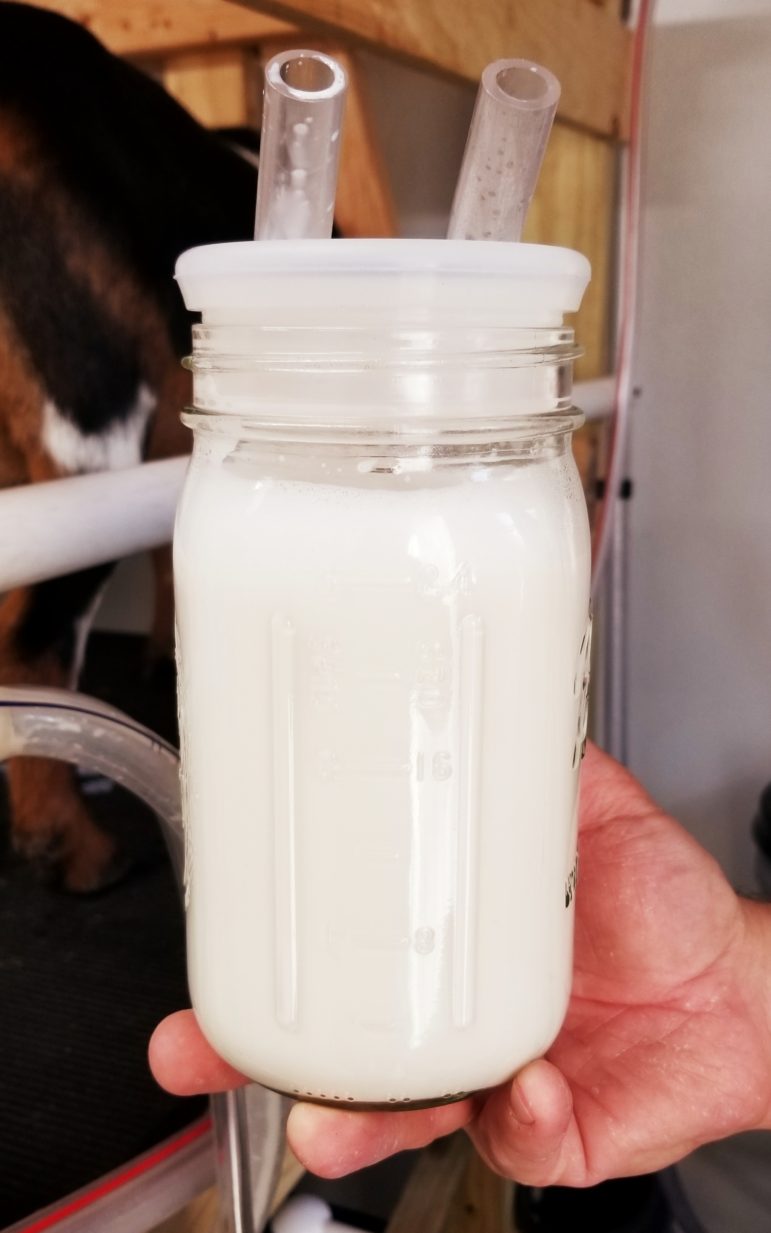 The fruit of two lactating goats’ labors–contained in a large glass Mason jar–is destined for the refrigerator, where it will be kept cold until the soap-making process begins. 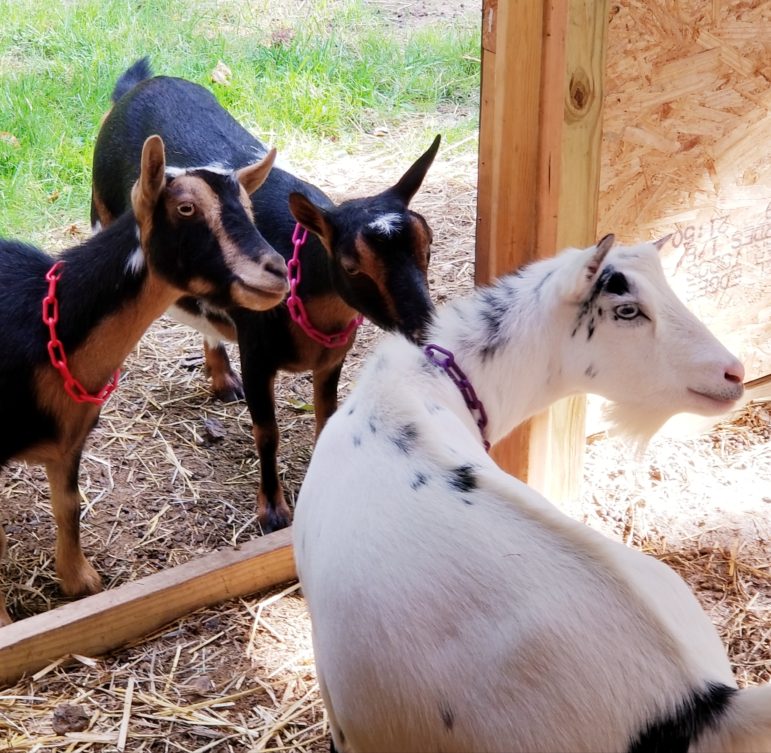 The dairy goats at Old Well Farm all have documented lineage that qualifies them for use in commercial agriculture. 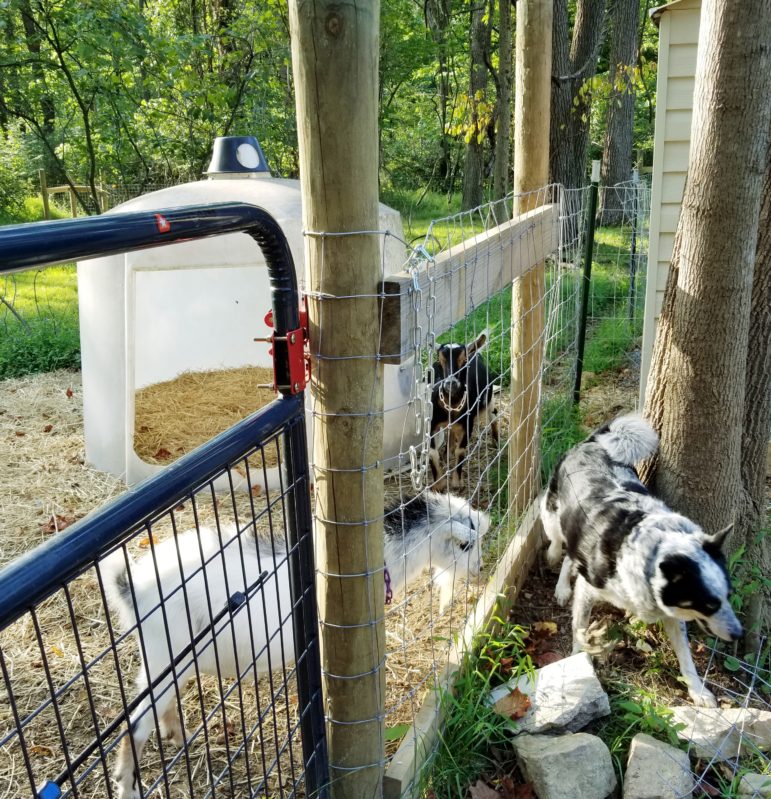 Life on the farm never stops. The Johnsons said that although they are occasionally able to get away somewhere, they must arrange for someone to milk their goats twice daily while they’re gone if they take even a brief vacation. 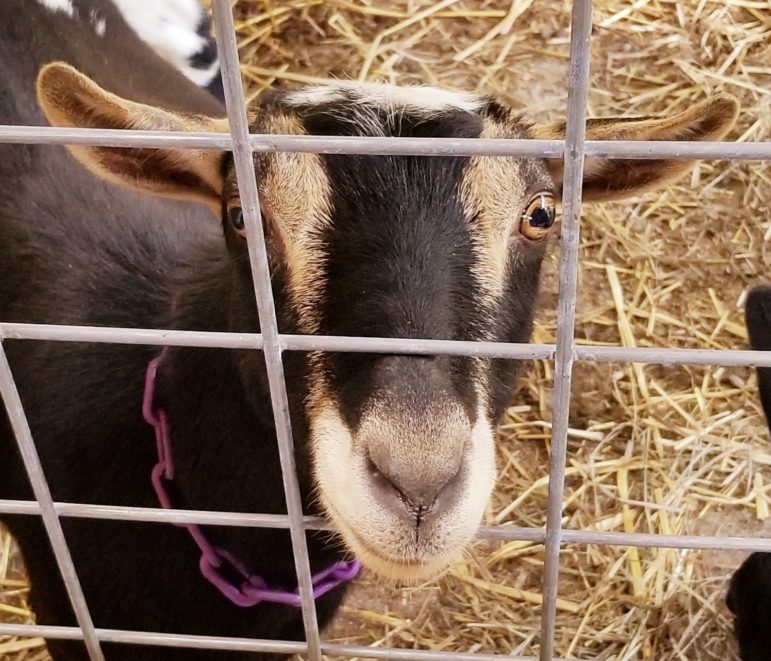 Got goats? Yes, they do. At Old Well Farm in Lower Saucon Township, however, the question is more likely to be, “got goat’s milk?”