In this week’s action the little Panthers returned to the friendly confines of Dimmick Park to play host to the Salisbury Falcons. It was another beautiful, sunny and warm day that was perfect for football and most fans I talked to agreed that so far this season we’ve been very lucky to have such good weather for our games.

Starting off was the Rookie Flag team. This game if they kept score would have been a very high scoring affair, with the Panthers piling up touchdown runs by #3 Hudson Gonzales (two), who also led the team in rushing yards this week with 97. One touchdown run each was made by #8 Brody Weiss (total of 52 yards rushing), #14 Bryce Johnston (28 yards rushing) and #18 Benjamin Ganji (17 yards). It was a very entertaining game to watch, as the kids continue to hone their skills, and as always they finished with a show of good sportsmanship as the teams shook hands at the 50-yard line.

All photos by Rick Favere 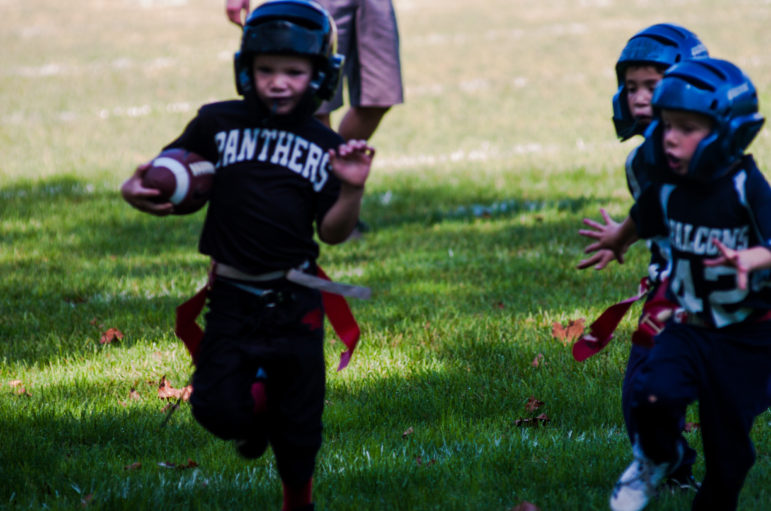 #8 Brody Weiss takes a handoff down the home sideline for a 40-yard score. 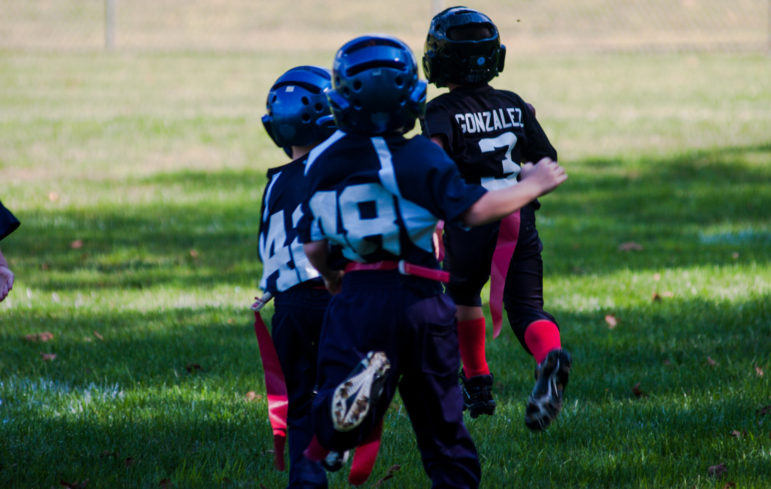 #3 Hudson Gonzales leaves a pair of Falcon defenders behind on his way to a first half touchdown. 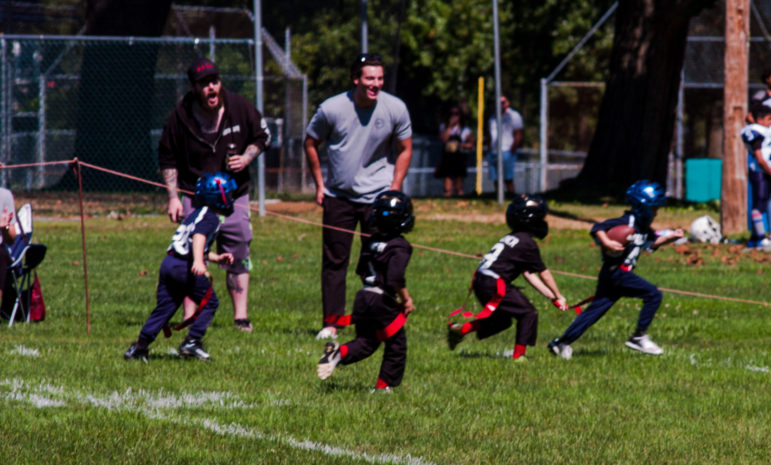 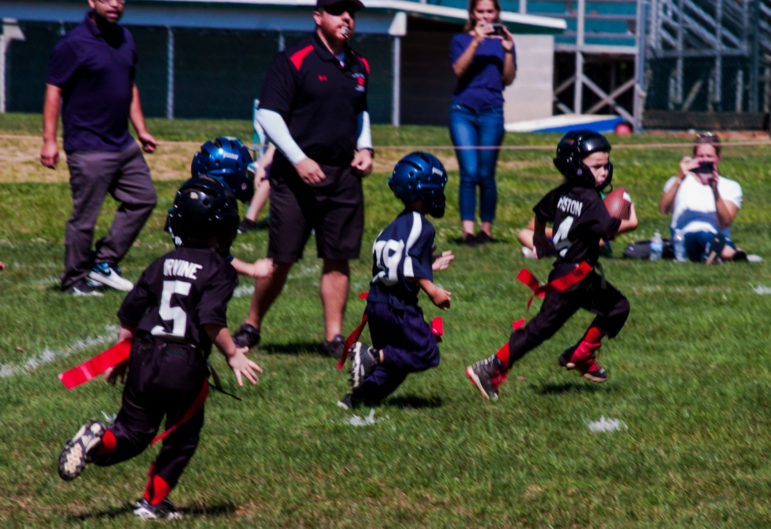 #14 Bryce Johnston accelerates past the Falcons for a 40-yard touchdown.

Next up on the schedule was the Competitive Flag division. The Panthers came into the game wanting to post their first win and started out trying to run the ball. They found occasional success, but as has been the case they were facing a team that was bigger and more physical, which put the home team at a slight disadvantage. That being said, this team is young and comprised of a good number of first-year players who are still learning the 11-11 format after coming up from the rookie flag squad. Statistically, #30 Mateo Lazaro led the offense with 26 rushing yards, followed by #33 Hudson Mertz with 17 and #12 Jayden Reifinger with 13. The defense played well and featured solid performances from #33 Hudson Mertz with 3 stops, 2 for loss; #12 Jayden Reifinger and #26 LukePeters each with 2 stops, 1 for loss; and #15 Nicholas Ubert and #30 Matteo Lazaro with 2 flag pulls a piece. Despite the improved defensive play allowing only two scores, the Panthers fell 13-0 to the Falcons, who possessed the ball the entire third quarter and allowed little time for them to mount a second half comeback. 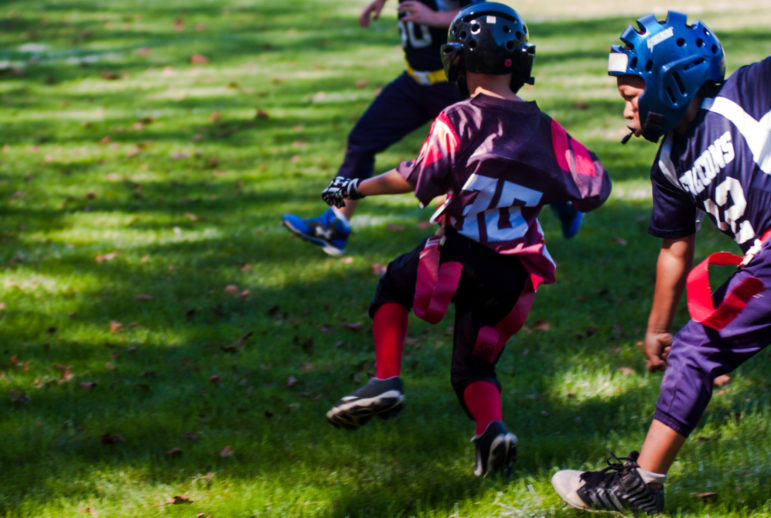 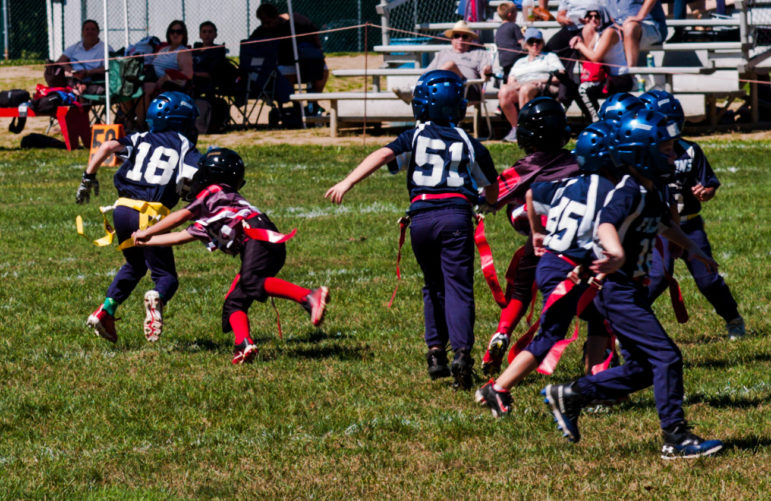 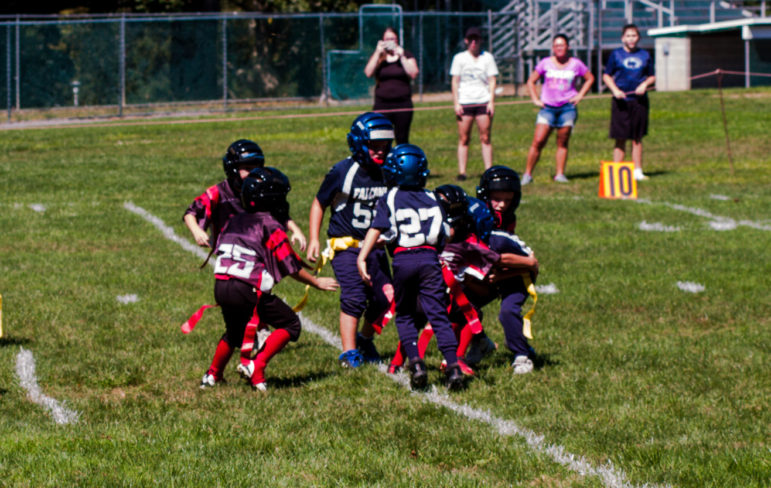 #25 Jase Szlachtianshyn and three other defenders corral a Falcon runner for a loss of yards on the play. 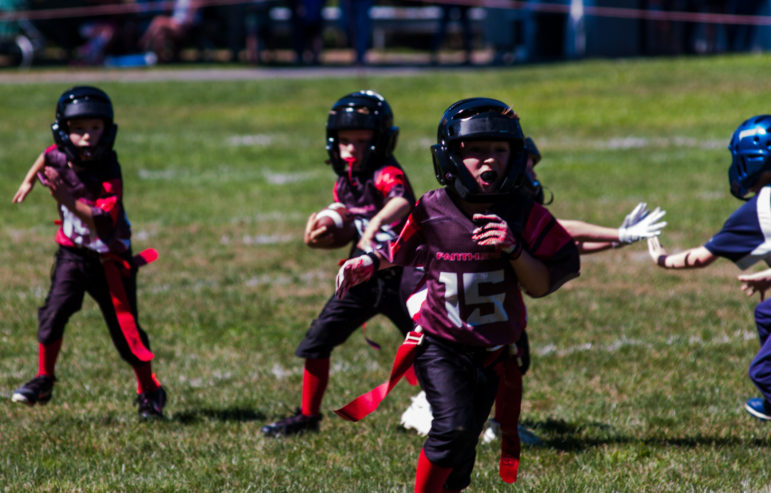 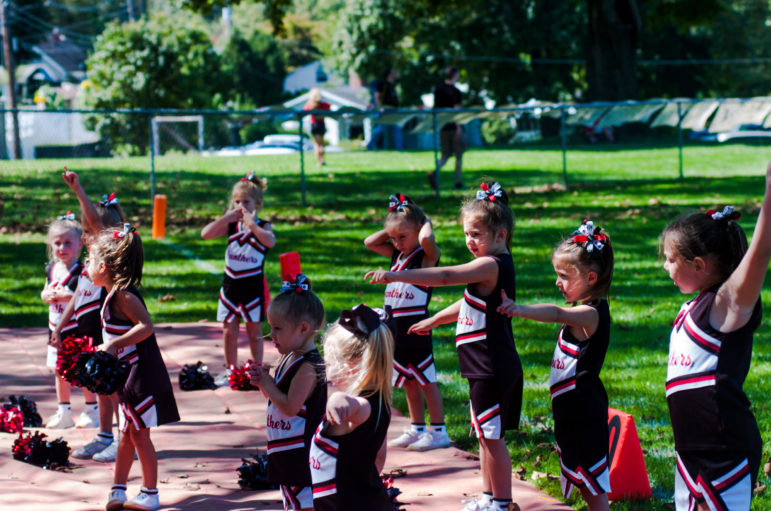 Showing their Panther spirit on the sideline. 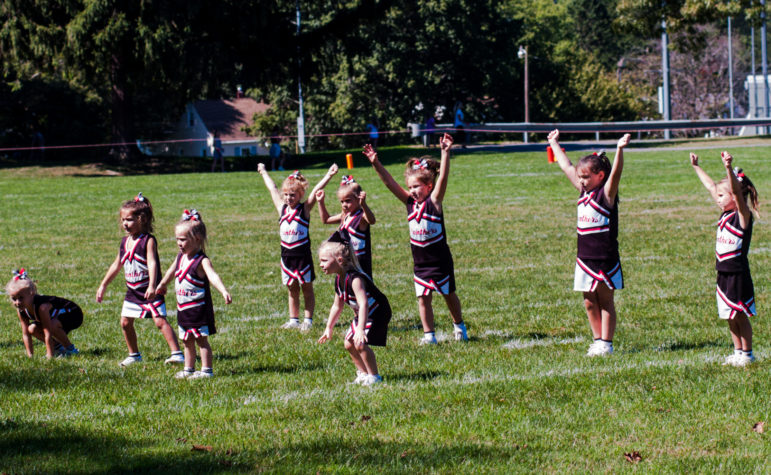 The next game featured the Junior Varsity team, and the Panthers were looking to rebound after last week’s controversial loss. The first half of the contest was a defensive affair, with neither team yielding any points. The momentum started to switch late in the second quarter when #16 Zachary Henn recovered a fumble, but with little time left in the first half the offense wasn’t able to convert the turnover into points while the half ended in a 0-0 tie. Early in the third quarter the Panthers grabbed the momentum and really started to take over when #3 Taylor Rohn scored on a 30-yard touchdown run. Then with the Panthers on defense, #50 Sean Ewashko pounced on a Falcon fumble, creating the second turnover of the game. #20 Grayson Schmell took the next play for a 32-yard touchdown which gave the home-team Panthers a 12-0 lead. The Panther defense played strong and was led by #38 Ricky Favere, who recorded 6 tackles, 3 for loss; #85 Brayden Frey, who had 4 tackles, 1 for loss; and both #3 Taylor Rohn and #28 Jacob Peters, who recorded 4 tackles each. The offense was paced by #20 Grayson Schmell with 110 rushing yards plus 2 scores on 10 carries and #3 Taylor Rohn, who contributed 79 yards and a score on 7 carries. The defense finished out the game posting their first shutout of the season in a 19-0 victory which brought their record to 2-2. 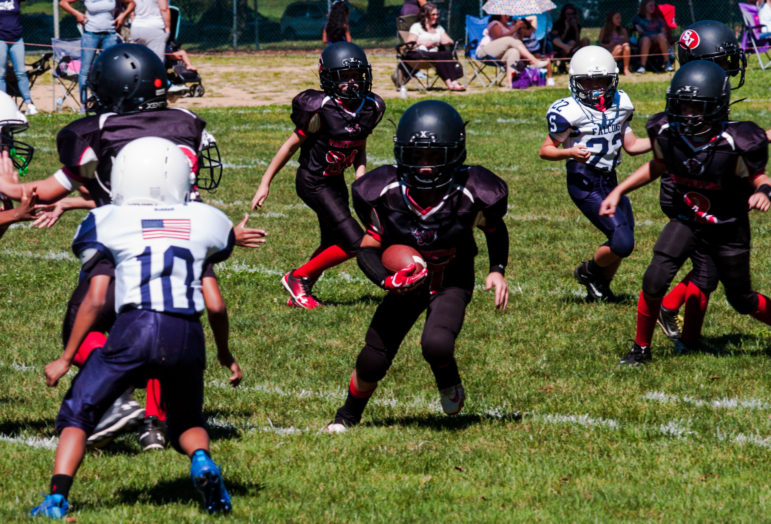 #27 Elijah Szlachtianshyn puts a juke move on a Falcon linebacker. 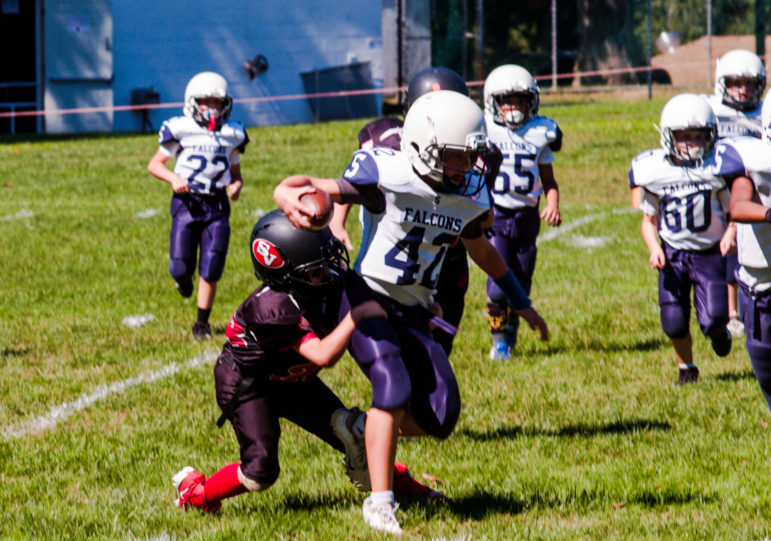 #38 Ricky Favere chases down the running back to tackle him for a loss. 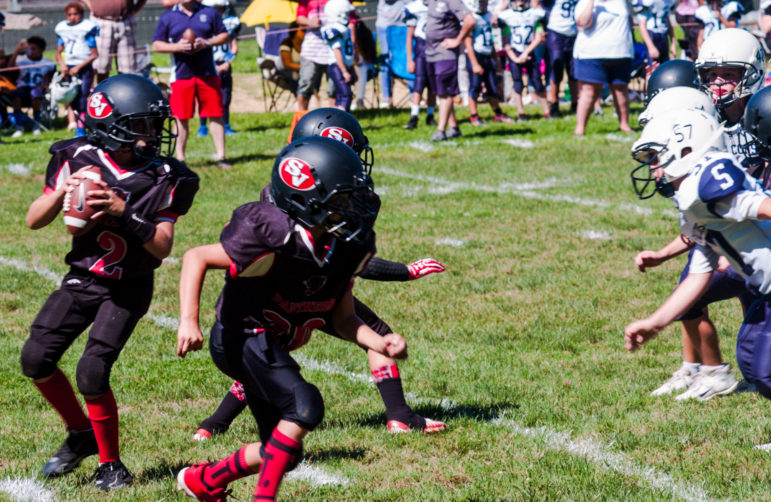 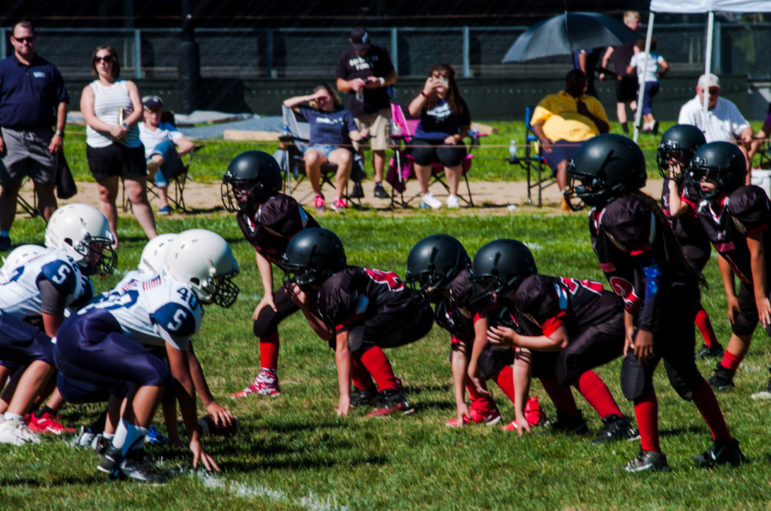 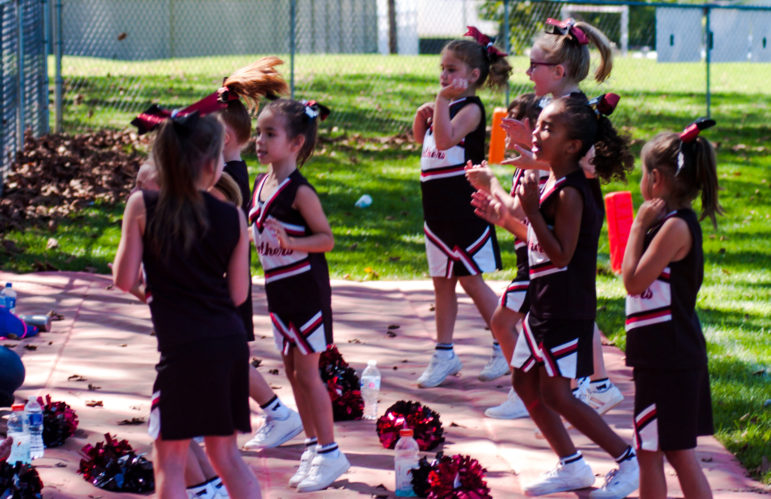 The Junior Varsity cheer team performs what looks like the dynamite cheer on the sidelines. 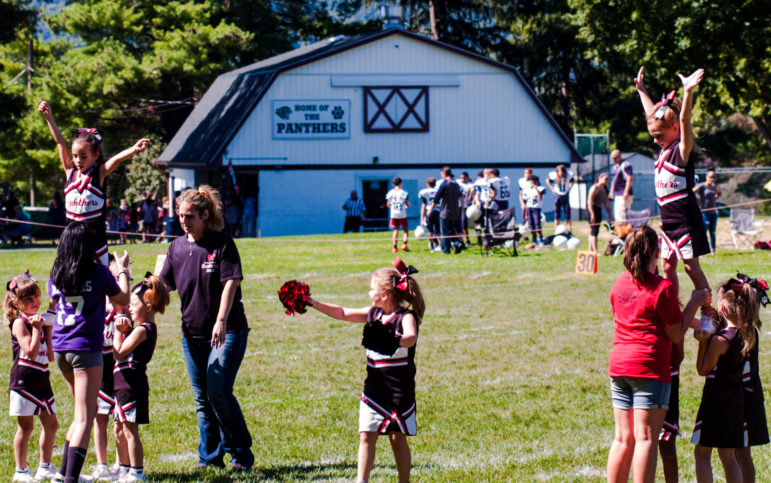 In the day’s final contest, the Panthers came in riding a two-game winning and shutout streak. The players were determined to continue it as they once again got out to an early first quarter lead courtesy of a 12-yard touchdown run by #25 Anthony Maholland. The defense held the Falcons offense off the board and the 1st quarter ended with a 6-0 Panther lead. The second quarter saw the offense seize momentum as they sustained several long-scoring drives and increased their lead to 27-7 by halftime. Shortly after halftime their offense stalled out and sent out the punt team. Coach Brown boldly called for a trick play, a fake punt, which worked to the tune of a 57-yard run by #10 Peter Albano. Albano would then score a touchdown a few plays later. #18 Hector Mateo closed out the scoring for the Panthers, who went on to win the game 42-19. The defense was led by #25 Anthony Maholland, who was all over the field recording 5 tackles, 1 for loss, as well as 2 sacks and a pass defensed. Three other teammates, #1 Ashton Beckowski, #14 Matthew Ewashko and #33 Madden Heiserman recorded 3 tackles each. Although the team was disappointed to see their shutout streak end, they were happy to get the win. I spoke to Coach Brown after the game and he said he wanted to get #36 Jackson Albert (who led the team with 196 rushing yards and 2 scores on 14 carries) going early and often. Brown said the Panthers put on an impressive offensive performance against Salisbury, and he credited the offensive linemen with their excellent blocking for the team’s success. As for this weekend’s game, he said Northern Lehigh is tough and that they have a very competitive game coming up. The teams will take on the Bulldogs at Northern Lehigh, 1 Bulldog Lane, Slatington, beginning at 11 a.m. this Sunday, Sept. 22. 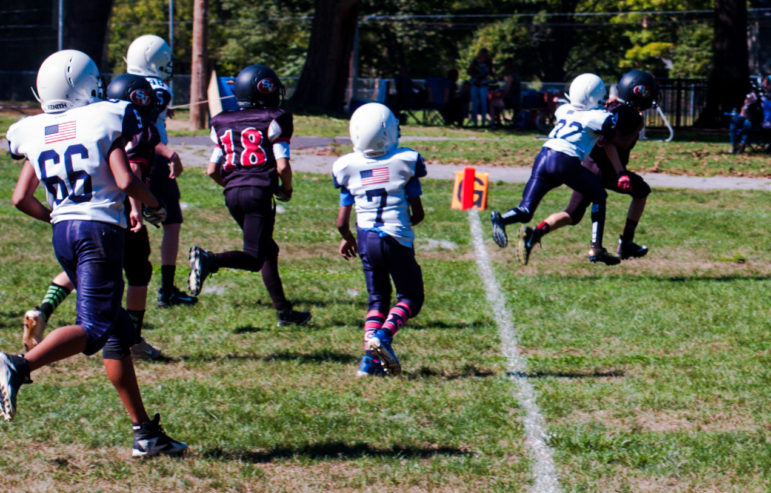 #25 Anthony Maholland is escorted into the end zone by #50 Brady Flores and # 18 Hector Mateo to score the first touchdown of the game. 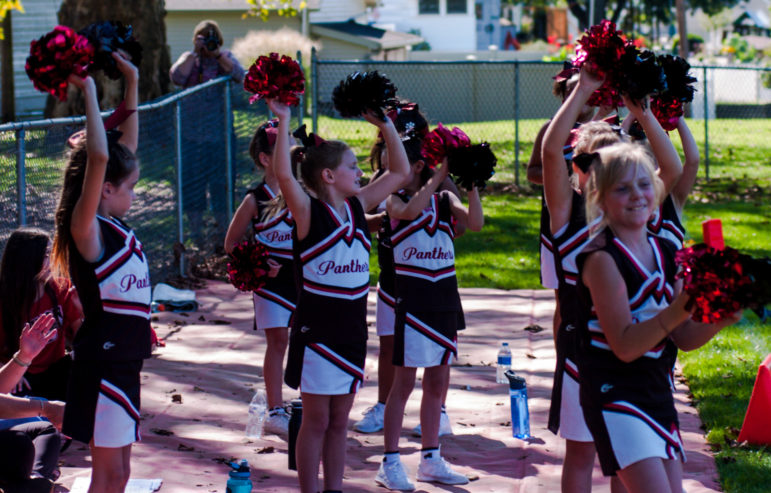 Varsity cheer celebrates the early score on the sideline. 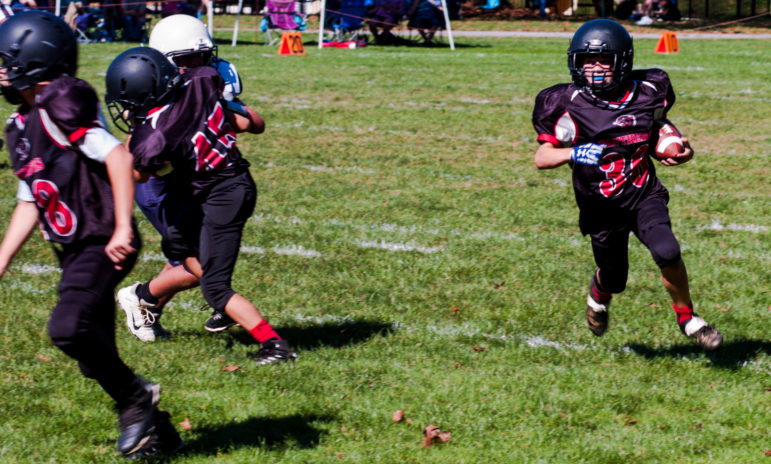 #36 Jackson Albert runs left while #45 Micha Hill holds a block and #18 Hector Mateo looks for a defender to engage. 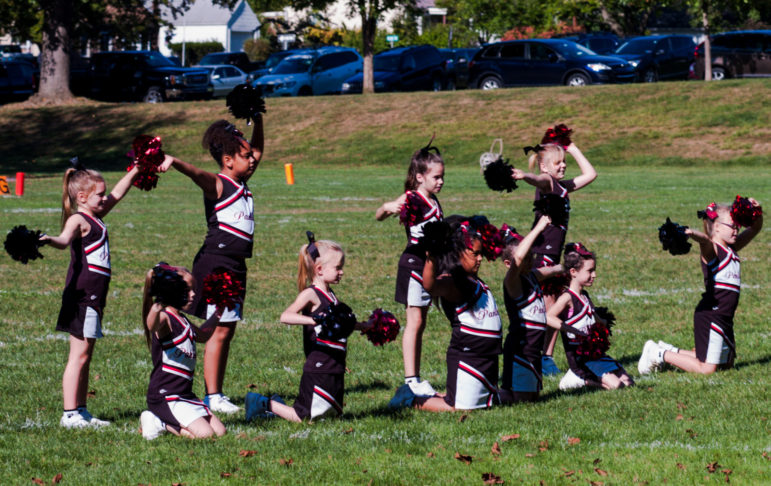 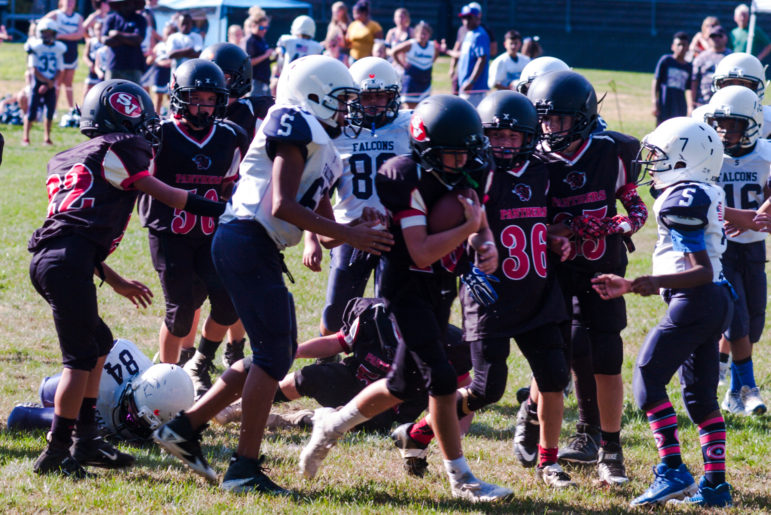 #10 Peter Albano scores on a quarterback sneak after Coach Brown called his number on a bold fake punt play that went for 57 yards in the third quarter. 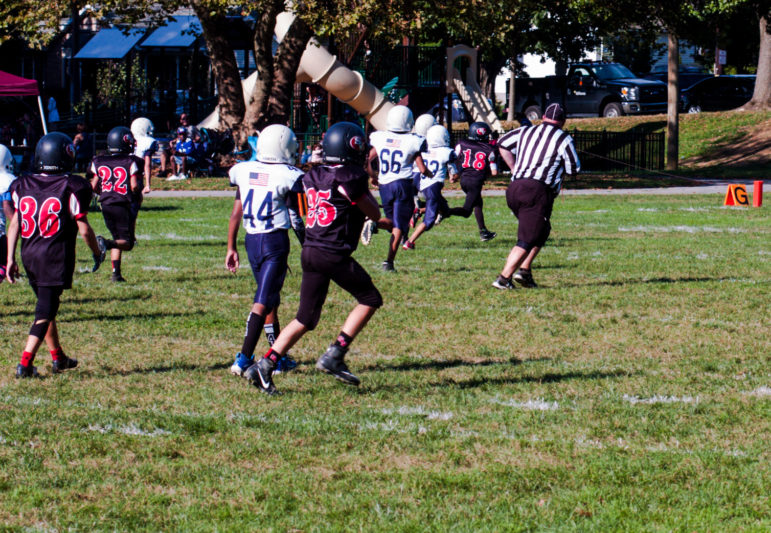 #18 Hector Mateo scores the final touchdown of the game to seal the Panther victory. Also in the picture from left to right are #36 Jackson Albert, #22 Noah Hubert and #25 Anthony Maholland.