As this week’s games were approaching, I was thinking back to last year’s visit to this venue. The weather was getting chillier at night and it reminded me of the unseasonably cold, wet day that they played on. Thankfully the weather was much better this time around. It was partly sunny with a high in the mid 70s, making it a beautiful day for football, although there were some other familiar issues the Little Panthers encountered on the trip to Palmerton on Sunday.

Kicking off the action this week was the rookie flag division, who seem to be sticking permanently with the format switch from 5 on 5 to 6 on 6 and switching from offense to defense after scores unlike what they had been doing last season. This game featured a stout Panther defense sparked by leading “tackler” #14 Johnston who had five pulls and #28 Thomas with four. They held the Blue Bombers pretty well in check for the game, allowing only two scores in the game. The offense played well, getting touchdown contributions from #28 Thomas, #3 Hudson Gonzales and #2 Caius Wagener, as well as some long runs from #11 Ezekiel Hallman and #21 Miles Bartholomew. The team continues to practice hard and develop the fundamentals to succeed at the next levels. (All photos below by Rick Favere.) 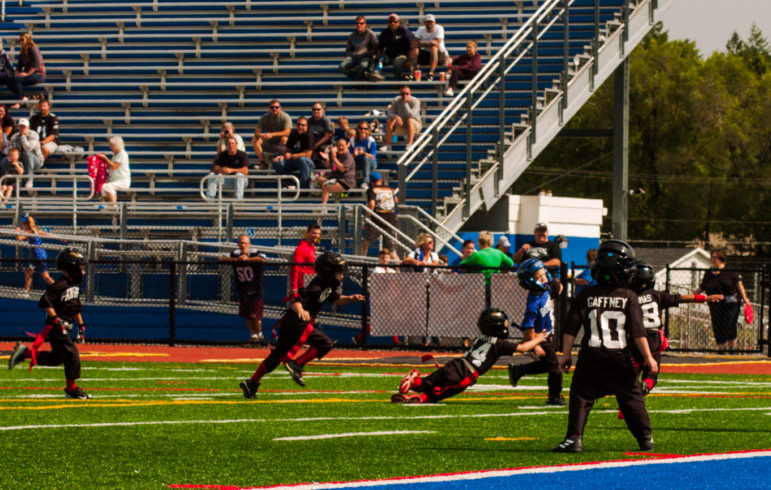 #14 Bryce Johnston gets one of his many stops in a diving effort near the 10-yard line. 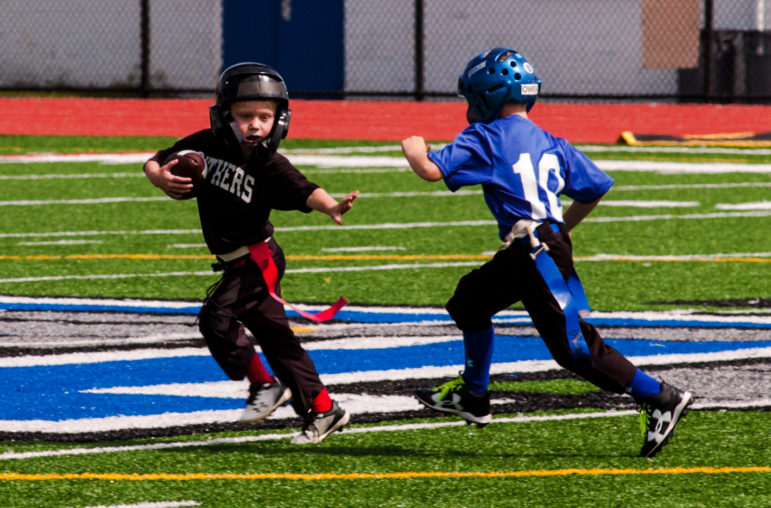 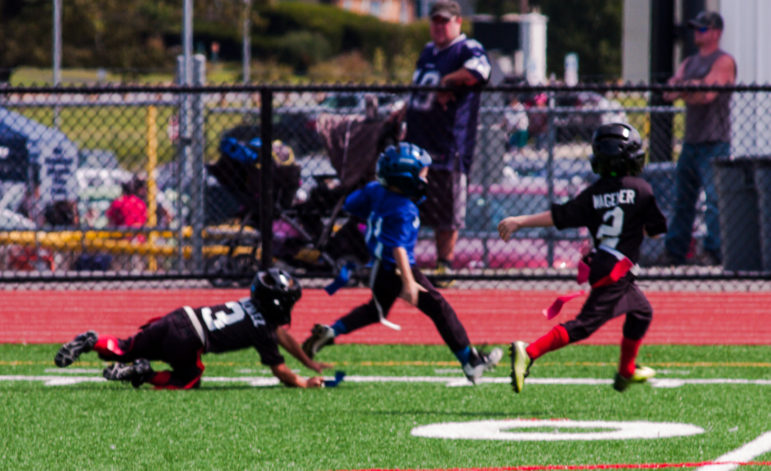 #3 Hudson Gonzales in another diving effort notches a flag pull at the 13-yard line. 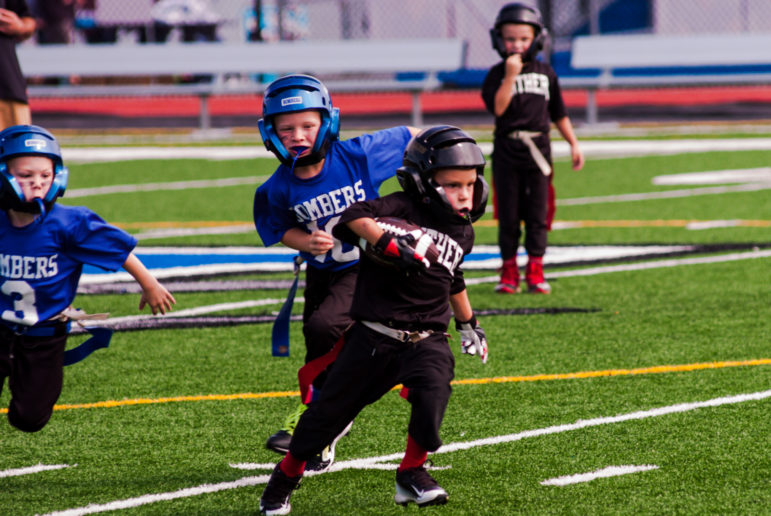 #11 Ezekiel Hallman with a look of intense determination runs past some Palmerton defenders.

The competitive flag division played next and after winning the coin toss, deferred possession to the at-home Blue Bombers, who wasted no time scoring on their first play, an unexpected pass. As was the case against the previous opponents, the size difference was obvious. The bigger and stronger team controlled the line of scrimmage, which limited the Panther running attack to a few big plays scattered throughout the game. Unfortunately, much like last year’s flag game, this game was not without its officiating controversy as the referees seemed to blow a play dead while a Panther runner still had both his flags on, negating what could have been at the time a momentum-changing score. Despite #30 Mateo Lazaro’s defense leading three stops, and hard work from teammates #25 Jaze Szlachtianshyn and #9 Drew Hamman, the defense allowed 32 points in the game. Offensively the Panthers were paced by #33 Hudson Mertz, who gained 52 yards rushing plus a touchdown, #12 Jayden Reifinger with 65 yards rushing and #24 Gavin Swierkowski, who compiled 30 yards rushing a score and two pass completions for 23 yards. The team played hard the whole game, and didn’t give up, but in the end fell to the Blue Bombers 32-13. 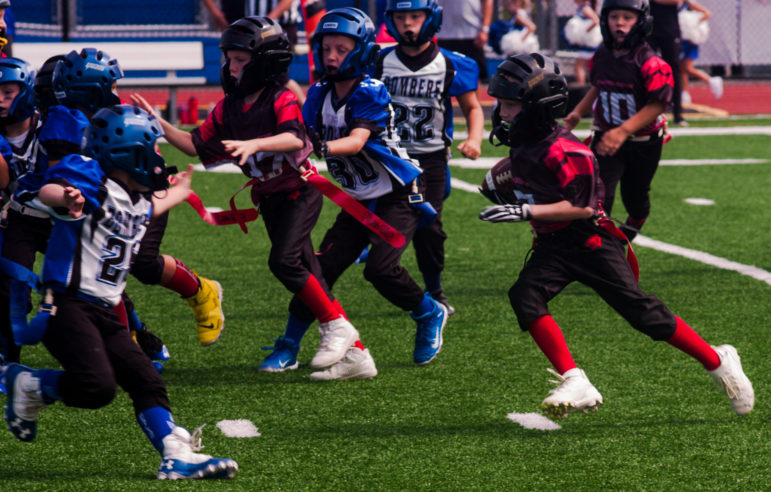 #12 Jayden Refinger takes the ball for a 30-yard gain on the Panthers’ first possession. 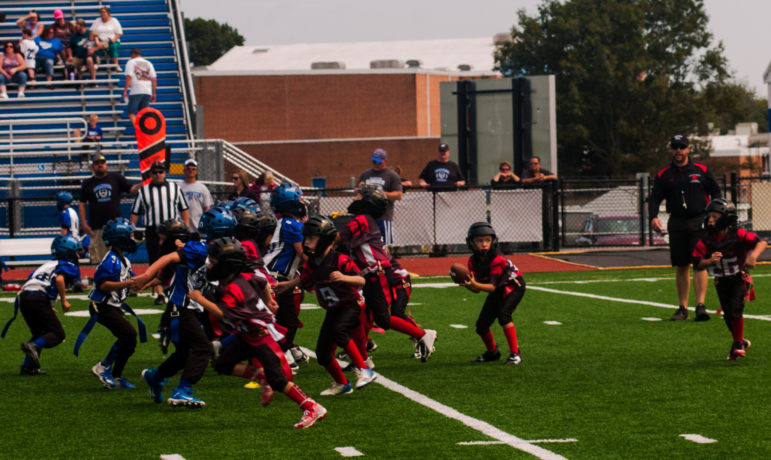 Quarterback #24 Gavin Swierkowski looks to pitch the ball outside to #26 Luke Peters while the line holds back the Bomber defense. 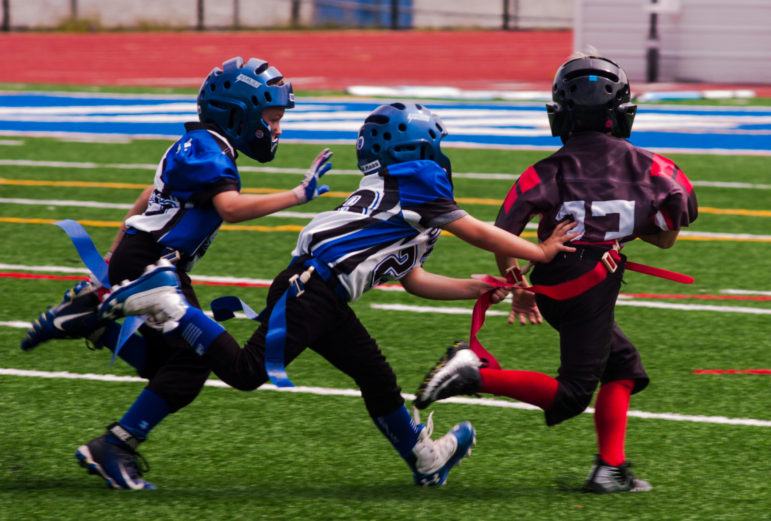 #33 Hudson Mertz has his flag yanked after a long run. 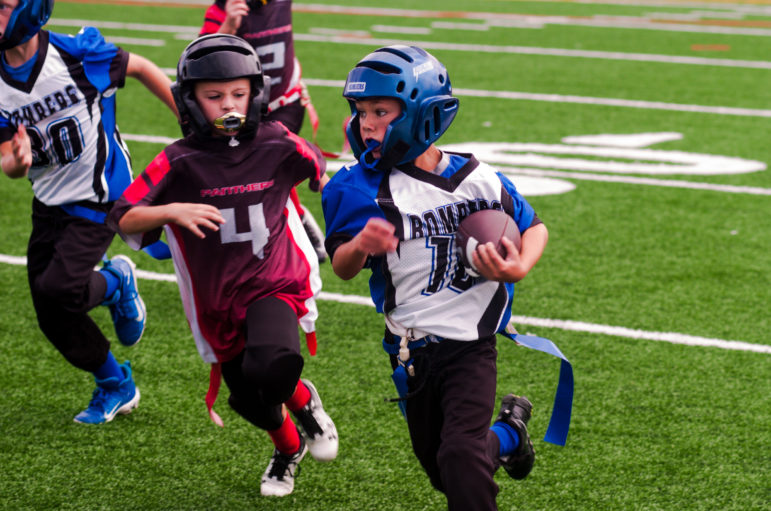 #4 Jack Brooks intently pursues a Blue Bomber running back along the sideline.

Next up on the day’s slate of games was the Junior Varsity division. They came into the game with a 1-1 record and were looking to expand their win column. The defense put in a solid effort all game long, as they had several players posting multiple tackles being led by #2 Christopher Chaffier with five tackles with two sacks and one for loss, #38 Ricky Favere who posted five tackles one for loss, and three others: #85 Brayden Frey, #3 Taylor Rohn and #4 Jaylen Caballero, with four a piece. Despite this strong effort, the Panthers allowed 19 first half points and trailed at halftime 19-7 thanks to a  21-yard, second quarter touchdown run by #20 Grayson Schmell with a PAT score by #3 Taylor Rohn. During the third quarter the defense held the Blue Bombers and #20 Grayson Schmell added another touchdown. The Panther defense clamped down again and gave the offense the ball back. Then all of a sudden after not calling a penalty the whole game, the refs decided to call back a long run. As if that wasn’t bad enough the very next play they called back the tying touchdown run by #3 Taylor Rohn. The crowd was extremely unhappy with the referees and boisterously let them know what they thought of the calls. Below in the photos are some of the egregious violations the refs for this game allowed, before making the calls they did against the Panthers. The Panthers–who played well enough to win the game–unfortunately couldn’t overcome the momentum the penalty calls created. They fought hard to the end and on a last effort, Taylor Rohn was tackled by what some thought was an illegal horse-collar tackle, but the refs didn’t see it as such, and yet another game in Palmerton ended in officiating controversy with a 19-13 final score. 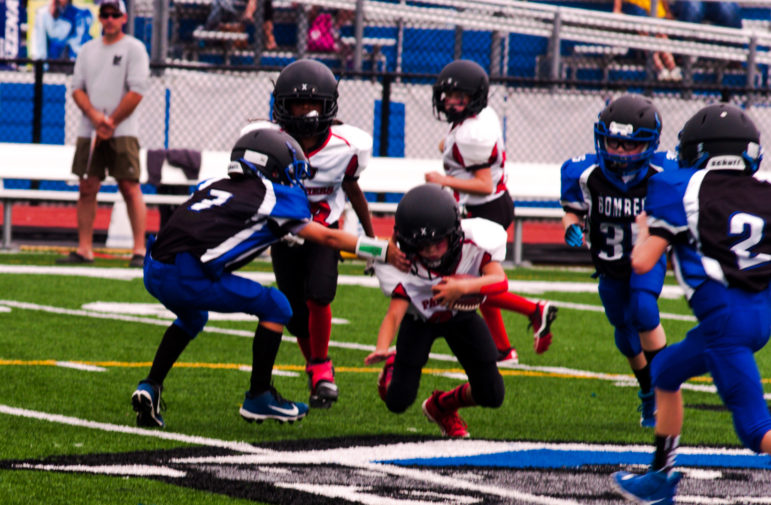 #20 Grayson Schmell gets pulled down by the facemask. 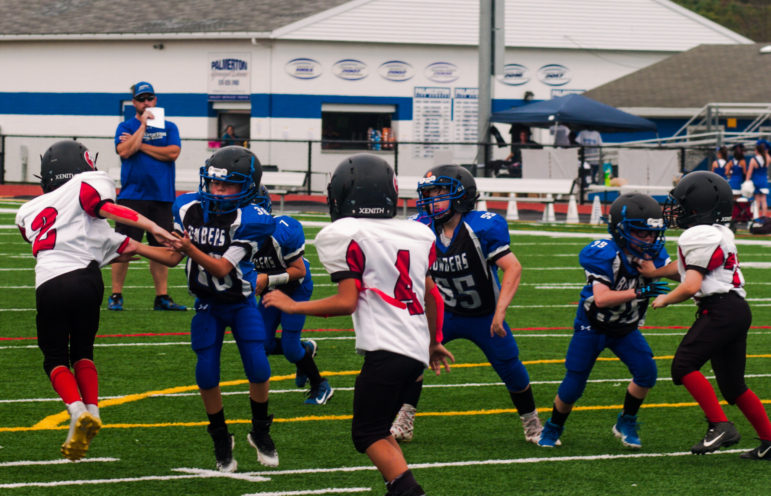 #2 Christopher Chaffier gets held trying to fight through the line while #4 Jaylen Caballero reacts to the runner. 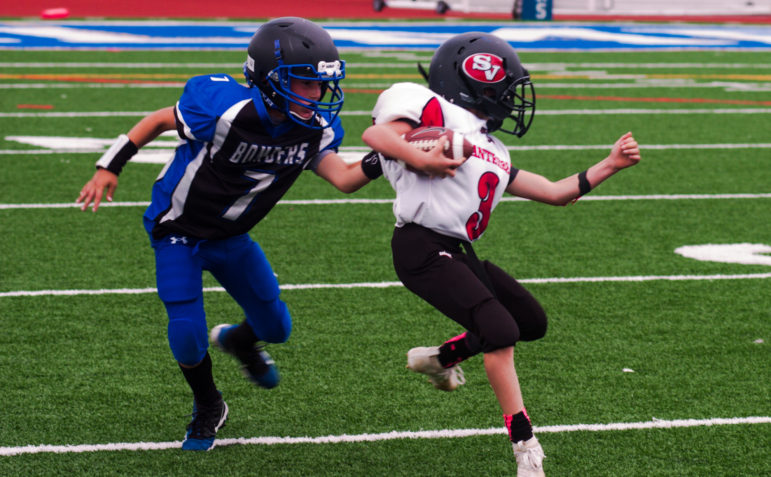 This was not the game-ending horse-collar tackle on #3 Taylor Rohn, but another one from earlier in the second quarter. 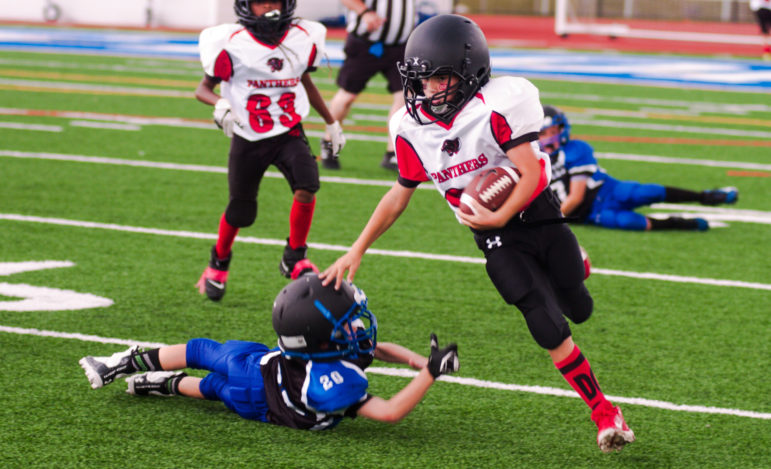 #20 Grayson Schmell has this defender eating turf with a devastating stiff arm. 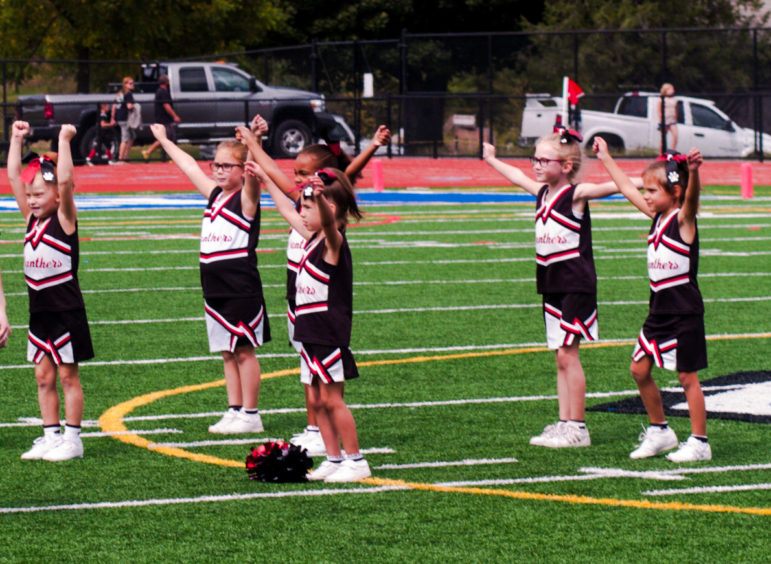 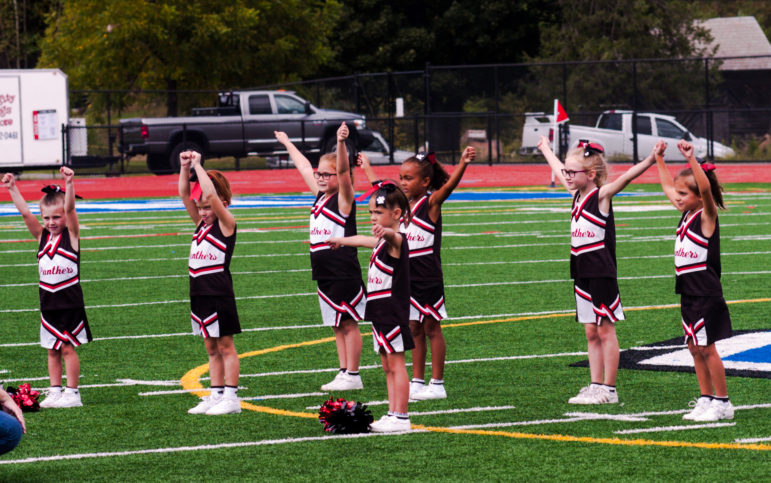 The final game on this beautiful day was the Varsity squad’s. Coming off a victory last game they were looking to keep the positive momentum going in week 3. They couldn’t have gotten off to a better start, with the defense stopping the Bombers on three plays, which led to a lengthy punt return by #36 Jackson Albert all the way down to the 2-yard line. The ensuing play saw him finish his work with a 2-yard score. The Panther defense continued their dominating play on the next drive, and all game for that matter. The next offensive possession saw the Panthers #21 Zakary Ziegler take a 53-yard jaunt for a touchdown to increase the lead to 13-0 at the end of the first quarter. The second quarter saw Ziegler score a second time and more strong defense, while the offense added another score by #23 Jakob Ziegler and a successful PAT run by Noah Hubert. This extended the lead to 29-0 at halftime and that was all this team needed as they cruised through the second half of the game to the same 29-0 final score. Offensively, the Panthers were led by #21 Zakary Ziegler with 85 yards rushing and two scores and #36 Jackson Albert with 35 yards and one. The shutout defensive performance was spearheaded by leading tacklers #14 Matthew Ewashko, #25 Anthony Maholland and #55 Brayden Gubish, while #56 Liam Stoneback and #11 Brady Rohn had three each, and #1 Ashton Beckowski notched two and a fumble recovery. The Panthers won their second in a row and have allowed zero points in their last two games, and look to be ready to defend their league championship come playoff time. 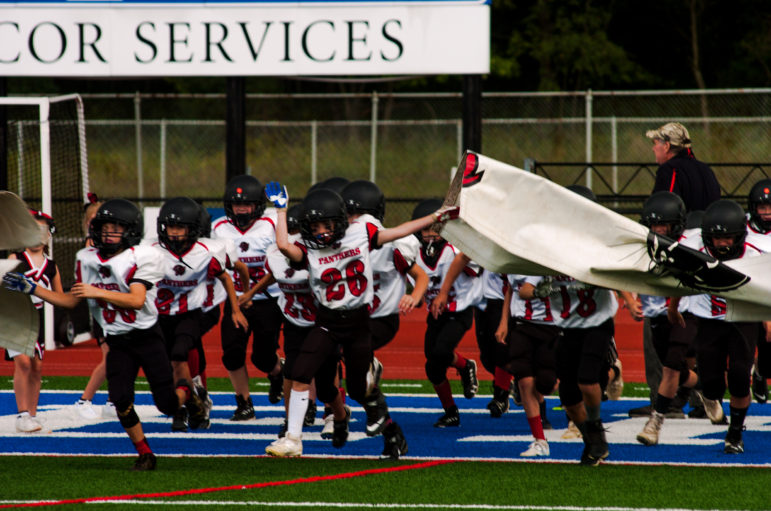 The varsity squad charges through the banner onto the field. 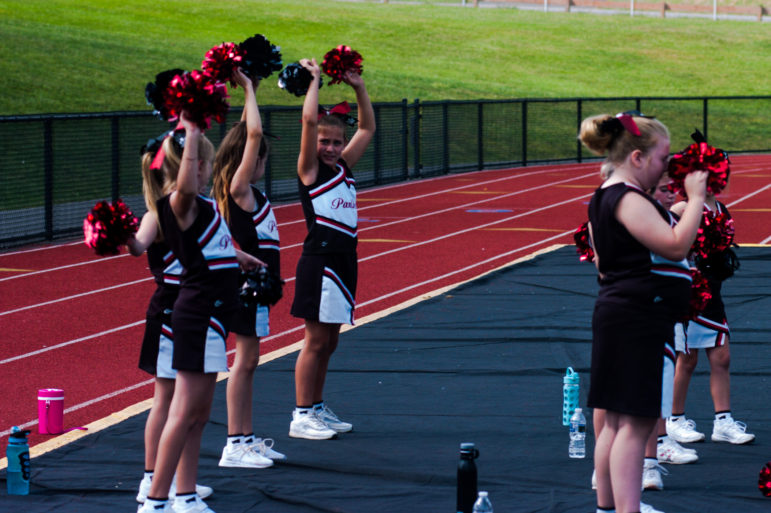 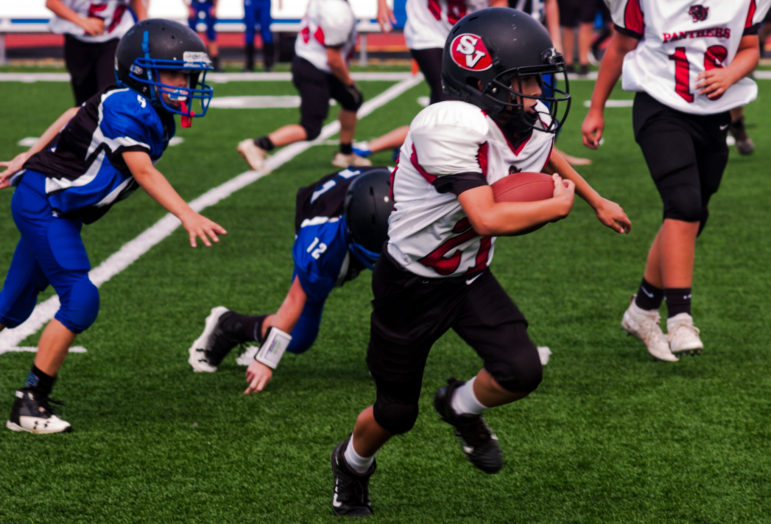 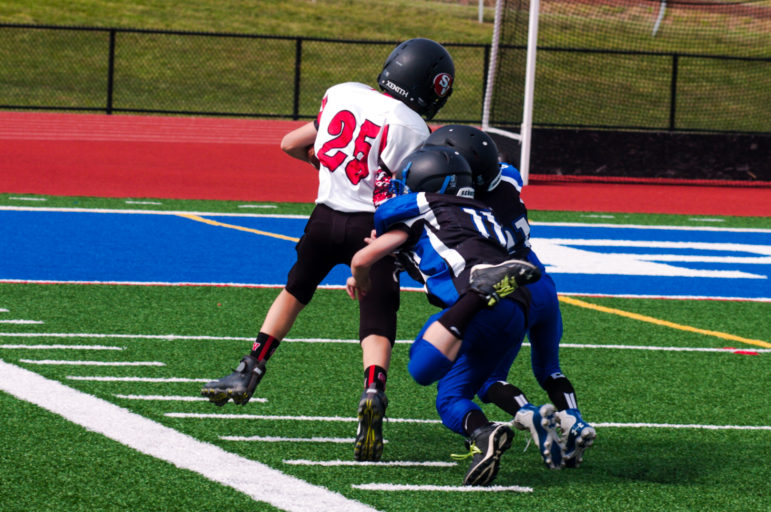 #25 Anthony Maholland tiptoes the sideline on a near touchdown run to the two-yard line. 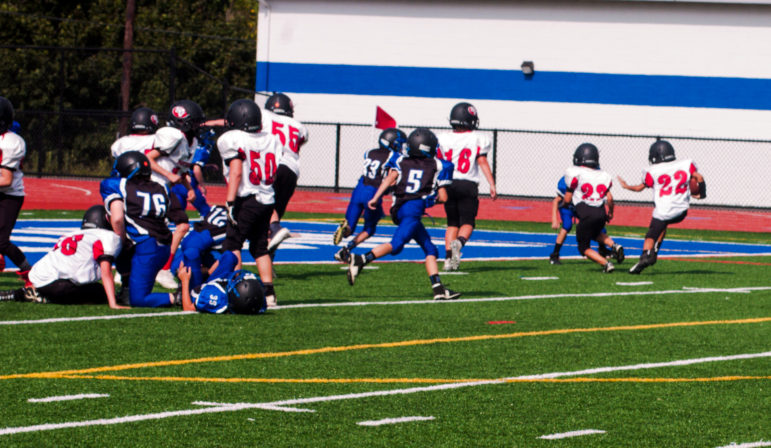 #22 Noah Hubert sidesteps a defender en route to a score. 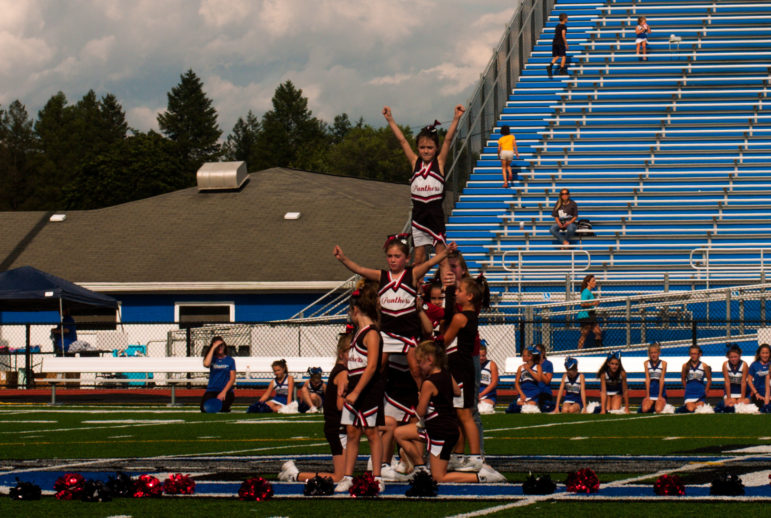 The Little Panther teams next play the Salisbury Falcons at home in Dimmick Park, Hellertown, this Sunday, Sept. 15. Games begin at 11 a.m. Visit the SVYSA website to view schedules and other information.