This week’s youth football action took place on a beautiful, sunny, warm day in Dimmick Park versus the visiting Pen Argyl Green Knights, and after a tough start to the season last week, the teams were looking to rebound.

The rookie flag division started off with somewhat of a surprise format change. Last week, they played 5 on 5 with each team getting a set number of plays before switching from offense to defense. This week, they played 6 on 6, used first down markers, and switched offense or defense after a score or a turnover on downs. These games would be high-scoring if they kept score, as it is much more natural for the kids to just run than it is to pull flags. This week saw five different Panthers reach the end zone for touchdowns on six scores. Jerry Thomas led the way with two scores of 40 yards each, while #8 Weiss, #11 Hallman and #2 all scored on 40-yard runs as well. In addition to his touchdown, #2 Wagener had quite a day on defense leading the team with four stops. Coach Taylor after the game said, “Every kid did their job today and had fun. The growth from week 1 to week 2 was incredible.” We look forward to watching these kids get better every week.

All photos below by Rick Favere 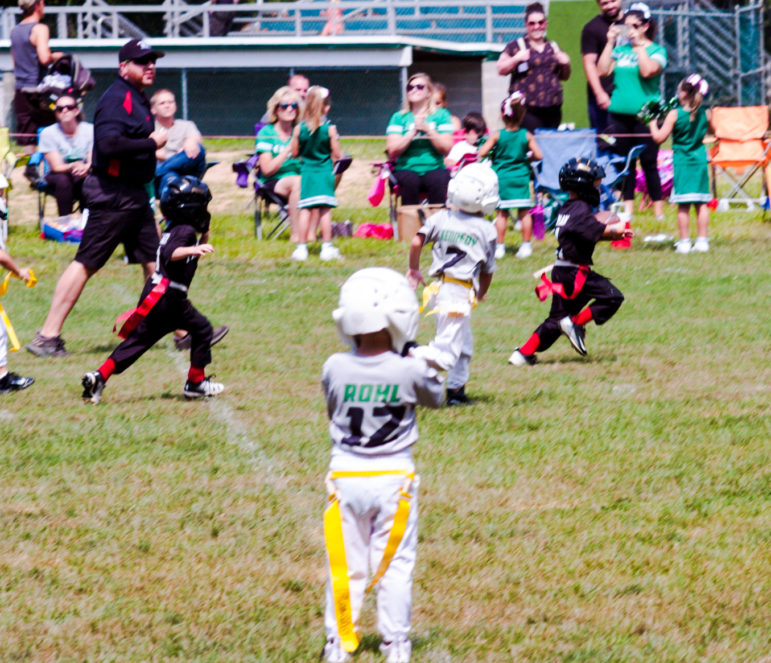 #11 Hallman weaves through the Knights defense for a touchdown. 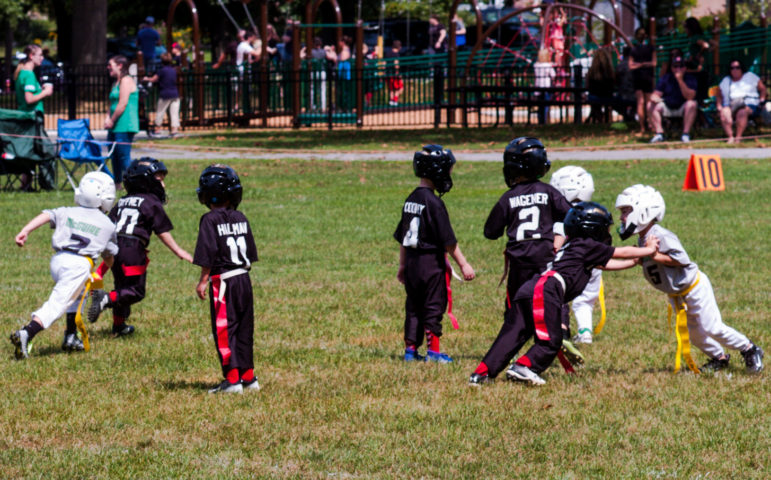 #10 Gaffney gets to the outside for a long run. 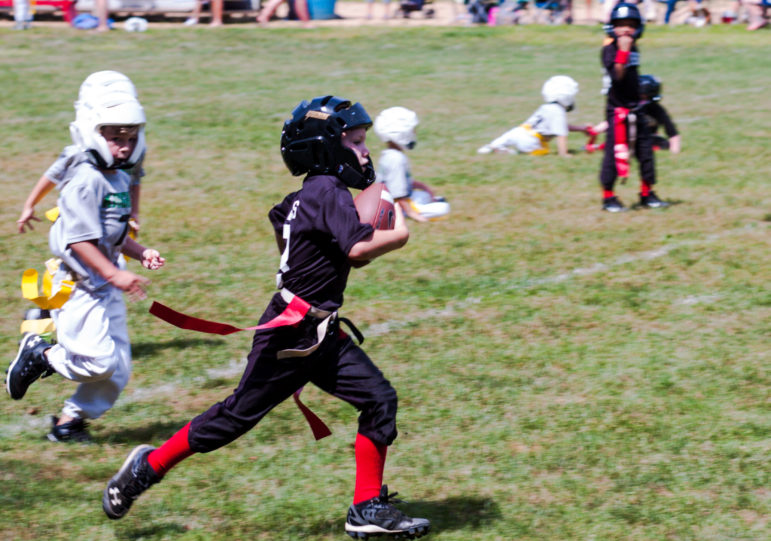 #8 Weiss in a full sprint takes it for a score. 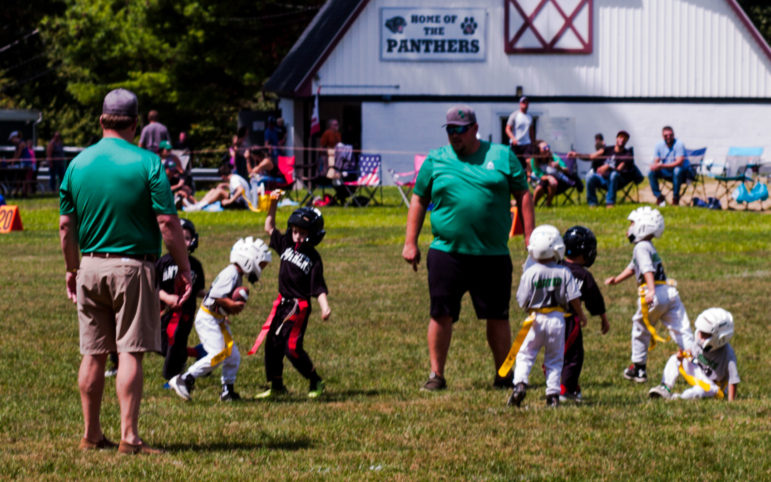 #2 Wagener celebrates a flag pull in the 2nd half.

The Competitive Flag team faced a dauntingly big and physical Green Knights squad and fought hard against a team that established an early 14-0 lead due to their size advantage in the power running game, and on defense. The Panthers were paced offensively by Mateo Lazaro with 68 yards including a 65-yard touchdown and Jayden Reifinger with 34 yards. On defense the Panthers were led by Jaxon Walser who had three stops on the afternoon, while also getting contributions from Matteo Lazaro, Gavin Swierkowski and Calvin Jones. Unfortunately their effort against this tough team came up short, with a final score of 32-6 leaving their record at 0-2 on the season. They will certainly be motivated and ready to go this week as they kick off against Palmerton. 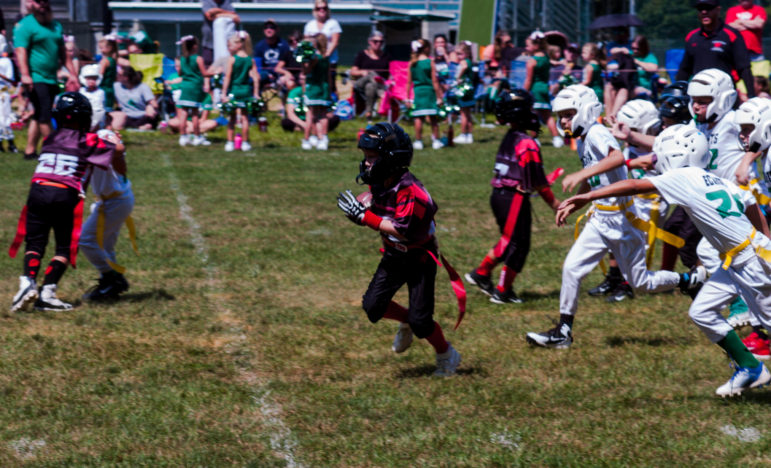 #12 Jayden Reifinger runs up the middle for a huge gain in the first quarter. 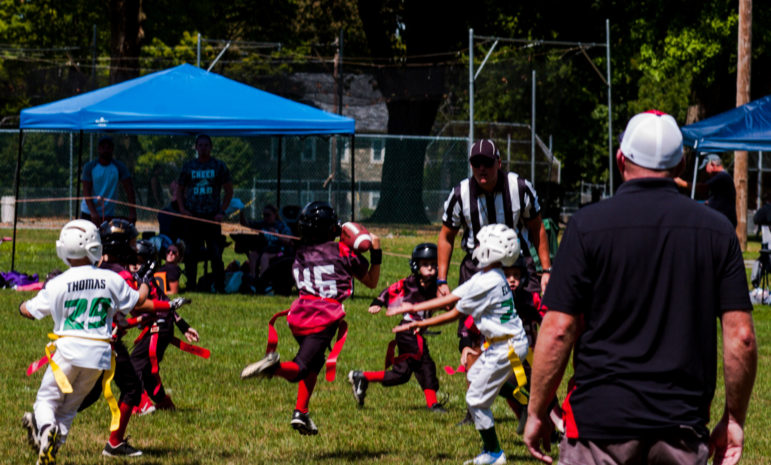 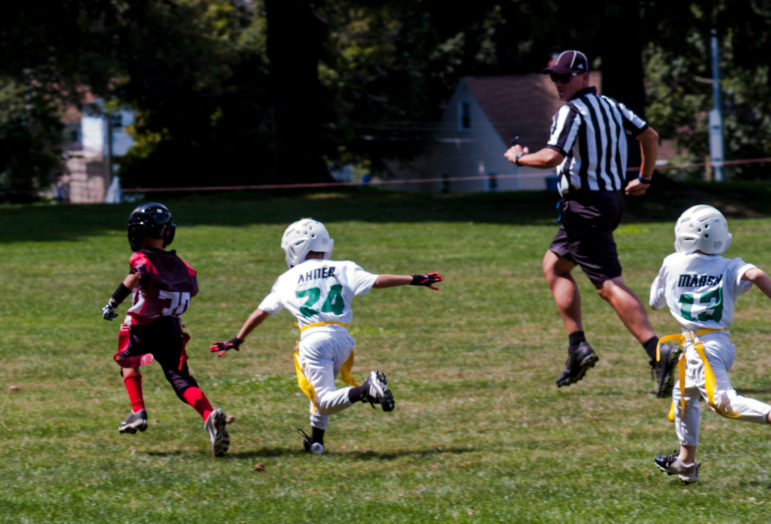 #30 Matteo Lazaro runs away while #24 desperately tries to prevent the touchdown. 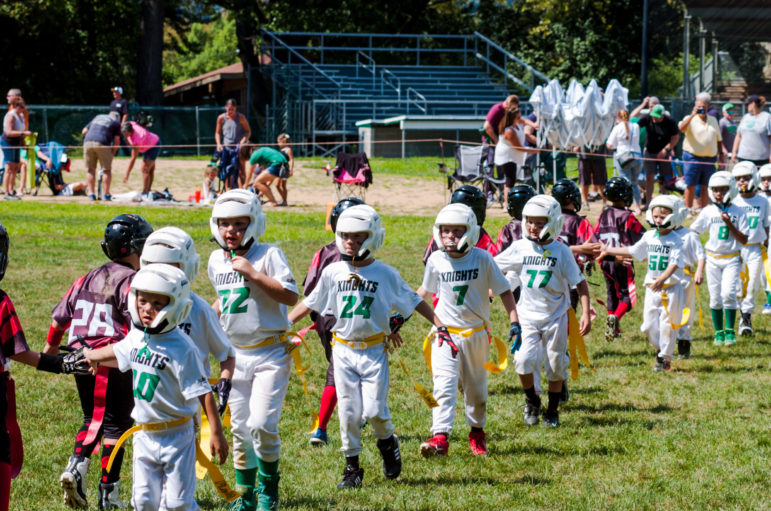 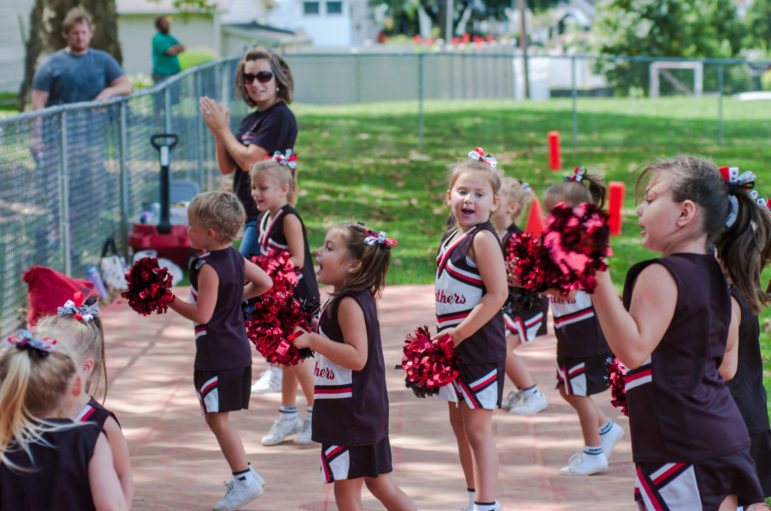 Rallying the crowd to cheer on the flag team. 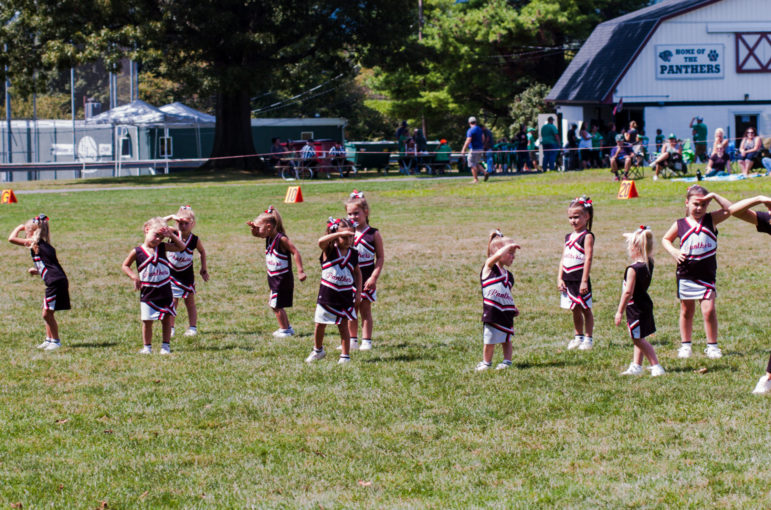 The Flag Cheer team puts on a halftime show for the crowd.

The Junior Varsity squad played next and jumped out to an early lead thanks to a 65-yard touchdown by Elijah Szlachtianshyn, and never looked back. They scored two more touchdowns, both by Taylor Rohn (49 yards on two carries) and consistently moved the ball with long runs by Grayson Schmell  (58 total on three carries including what should have been a 65-yard touchdown called back by the officials mistaking a stumble as a high-stepping Dion Sanders-type of taunting penalty), Jaylen Caballero (25 on one carry) and Ricky Favere (44 yards on two carries). The Panthers played great on defense too, allowing zero points in the contest while being led by Jack Calabria who recorded five tackles, one for loss and a QB sack as well as Sahalay Hernandez, who had four tackles and a sack. Taylor Rohn and Parker Trexler each contributed three tackles with one for loss in the shut-out effort. The Panthers played very well on both sides of the ball and finished the game with a solid overall performance and a 19-0 score. They improved to a 1-1 record for the season as they head to Palmerton Sunday for their week 3 matchup. Coach Doklan said “the kids work hard and are improving every week.” But he told them after practice that they haven’t done anything yet, and just because they won a game it is not time to rest. 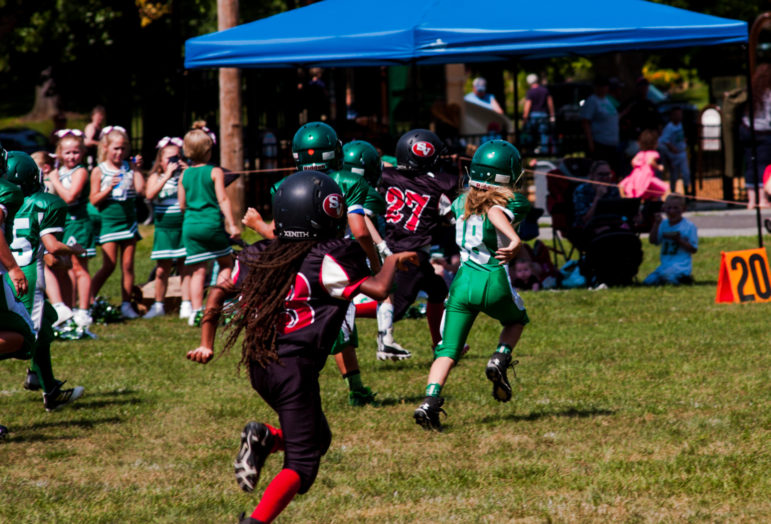 #27 Elijah Szlachtianshyn runs by everyone for an early 65-yard touchdown. 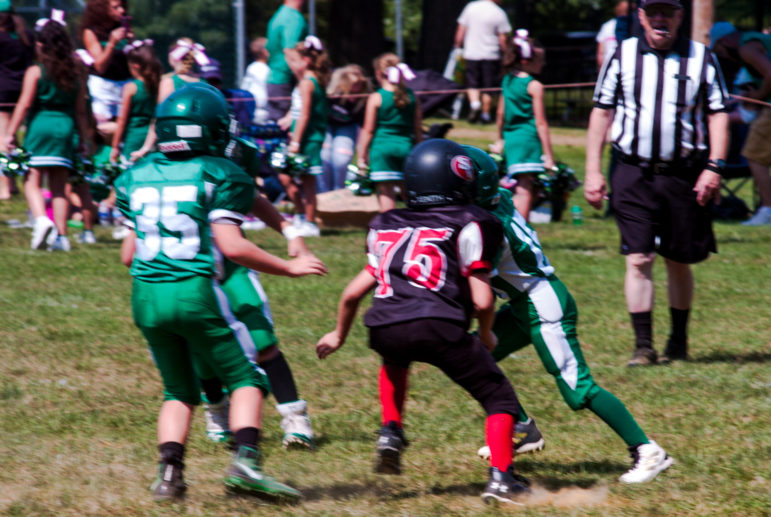 #75 Jack Calabria fights off a block to make one of his many tackles of the day. 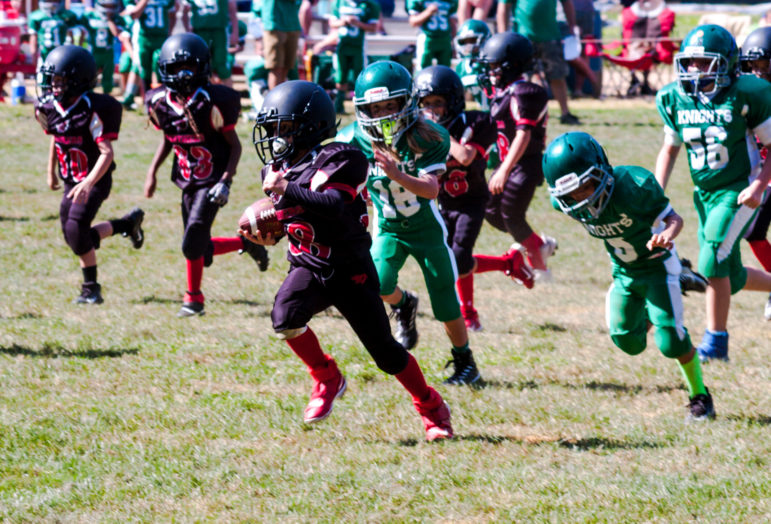 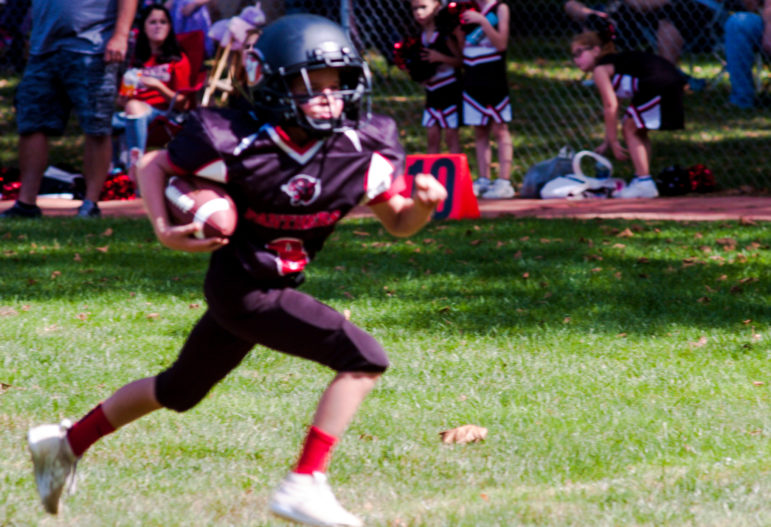 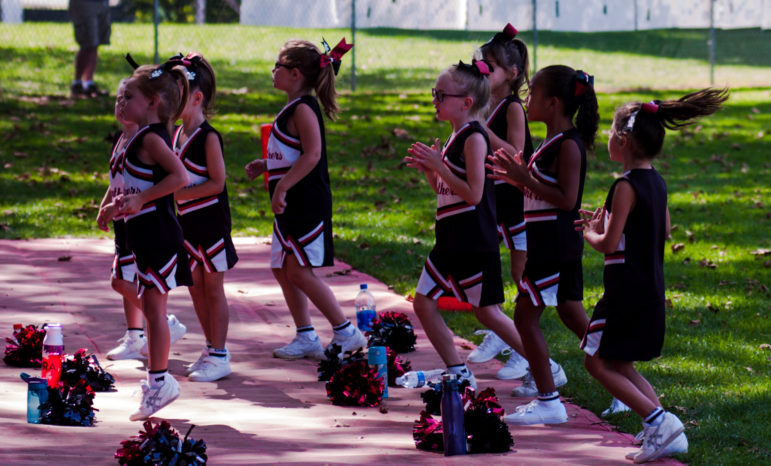 Pumping up the crowd on the sidelines. 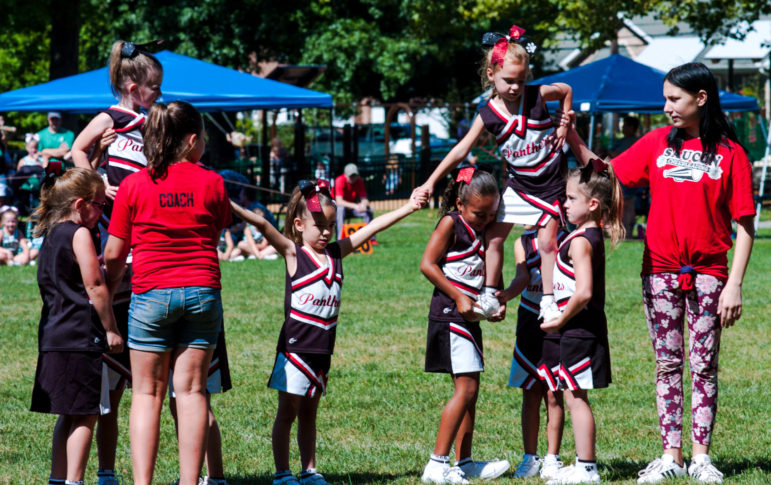 The last game of the afternoon saw the defending champion Varsity team perform very similarly to their junior counterparts. The offense scored early after a sustained drive which had Zakary Ziegler (two carries for 17 yards) and Jackson Albert (two carries for 31 yards and a TD) run it down the field and into the end zone. Albert wasn’t finished though, and now on defense, made arguably the play of the game, forcibly ripping the ball away from a Green Knights runner and taking it 85 yards back for another touchdown early in the 2nd quarter. Shortly after that the trademark ball-hawking defense we remember from last year put the brakes on another Pen Argyl drive with a fumble recovery by Anthony Maholland. The next drive saw our Panthers on offense grinding away the clock with another sustained drive culminating in a Peter Albano quarterback sneak at the goal line to put the home team Panthers up 20-0 at the half. The Panthers finished up the scoring with another short run by Albano in the 3rd quarter while the defense put up a performance that we had gotten used to seeing from that unit last year with several takeaways and zero points allowed. Maholland and Albert led the way on defense with three tackles and a fumble recovery a piece, while Micah Hill and Erik Wolf Jr. posted three tackles each. Offensive stat leaders were Zakary Ziegler (six carries, 81 yards); Jackson Albert (five carries, 47 yards and a TD); and Peter Albano (two carries for three yards and 2 TDs). The way they played was very reminiscent of last year’s undefeated squad and is hopefully a sign of things to come for the Varsity Panthers, who evened out their record at 1-1 after posting their impressive 27-0 win over the Knights. When asked about his thoughts on the team and their upcoming game, Coach Brown said, “I have a good feeling about this team. They’re improving every day and they’re going to be ready for Palmerton on Sunday.” 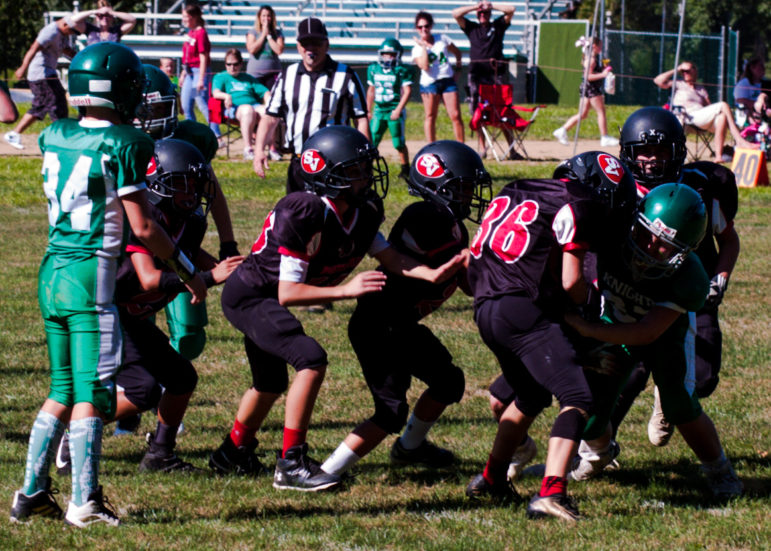 #36 Jackson Albert rips the ball away from a Green Knight rusher and takes it 85 yards for a touchdown early in the second quarter. 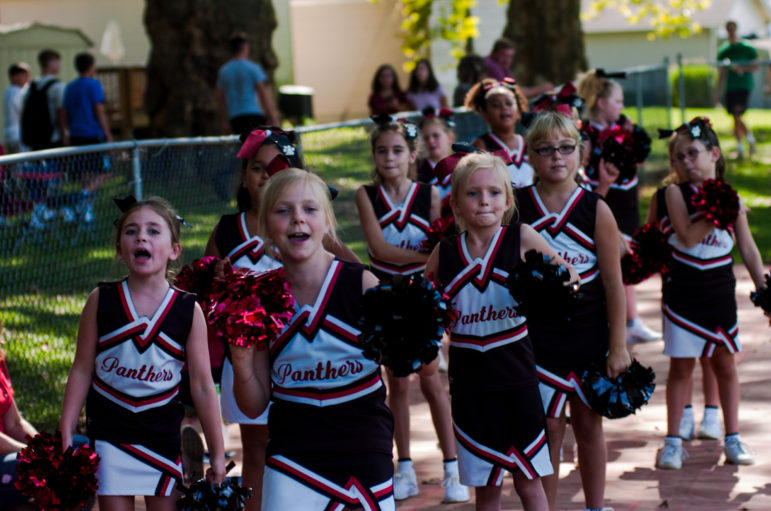 The cheerleaders are excited for a second quarter Panther touchdown. 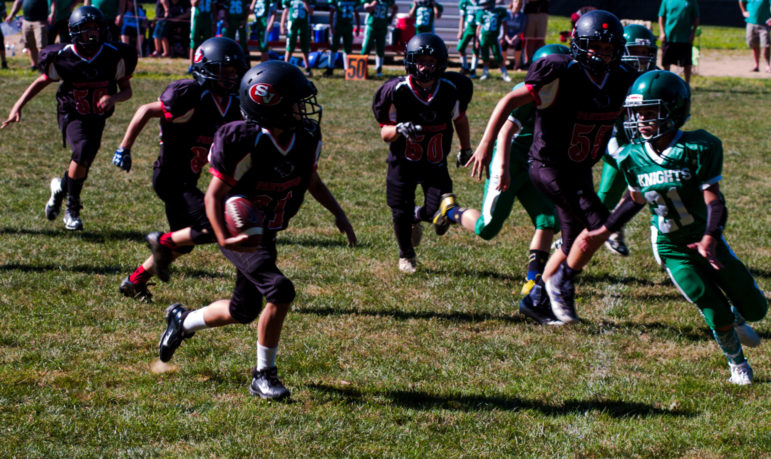 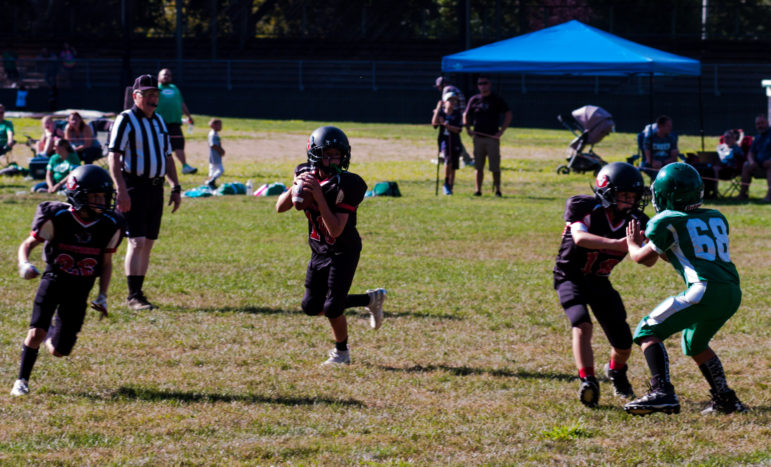 These next four shots are a sequence from one play: #10 Peter Albano drops back to pass. 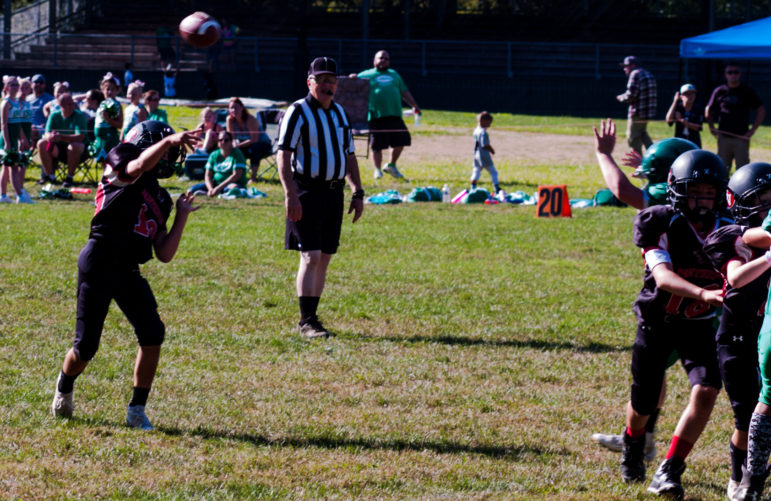 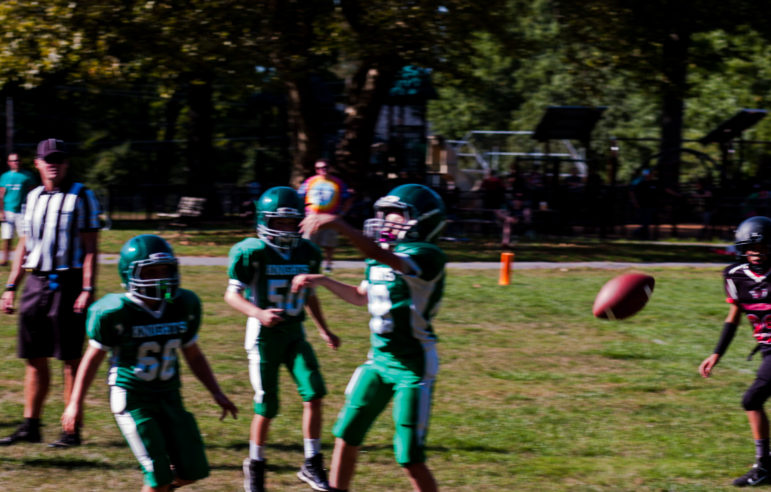 Just out of reach of the linebacker… 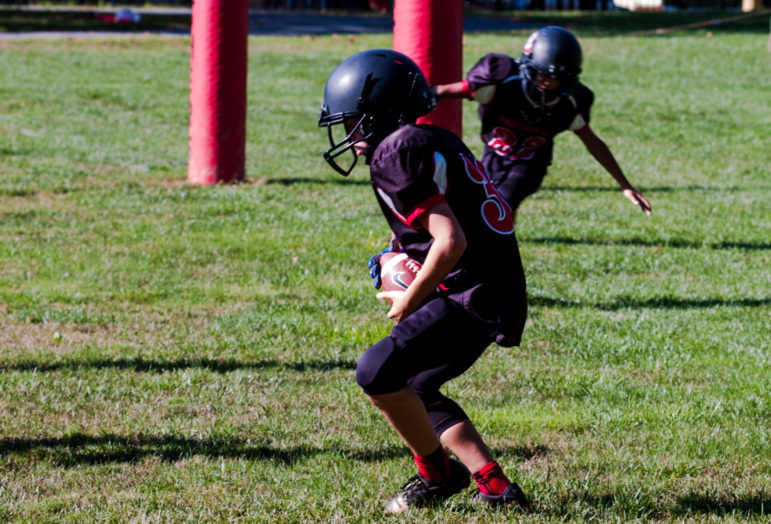 …into the arms of #36 Jackson Albert for a successful PAT. 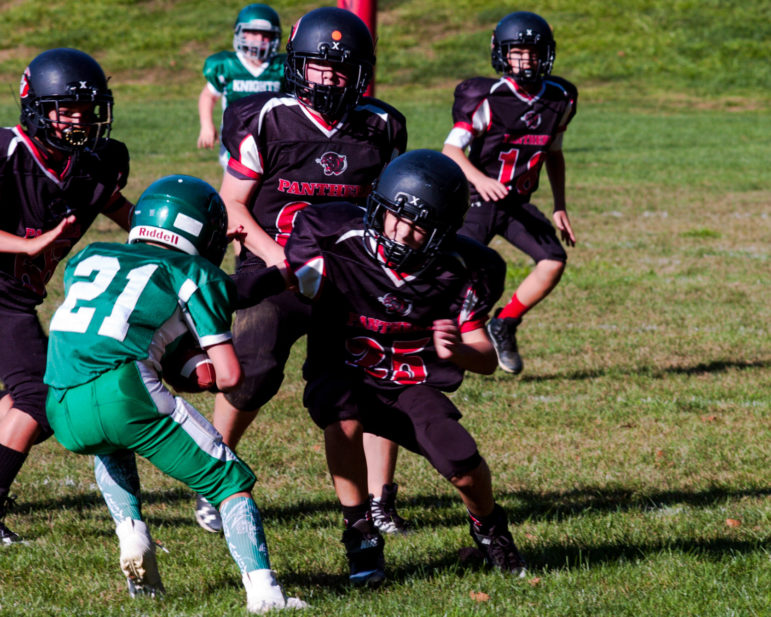 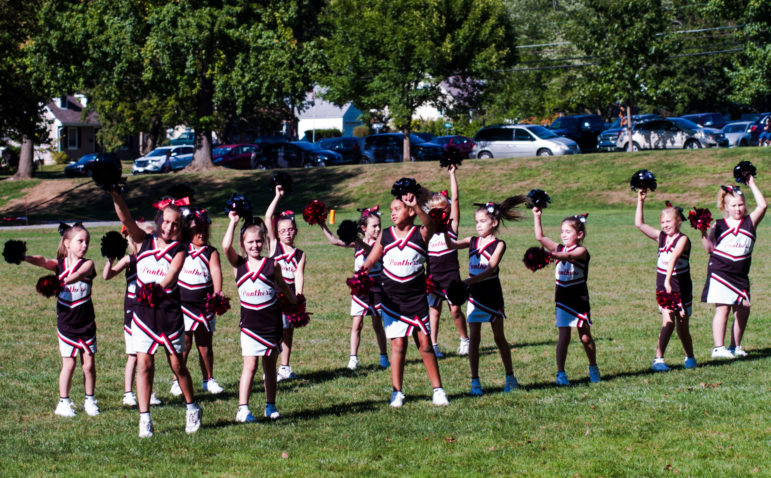