UPDATE: The kickoff times for Saturday’s (Aug. 31) games have changed. The kickoff for the Rookie Flags is at noon, the Competitive Flags play at 1 p.m., Junior Varsity kicks off at 2:30 p.m. and the Varsity game will begin at 4 p.m. The games are at Dimmick Park in Hellertown.

The little Panthers kicked off their season on a beautiful August morning with perfect weather playing host to the visiting Southern Lehigh Spartans in what turned out to be a tough weekend overall for Saucon Valley football. First they dispatched the high school team Friday night. Then they posted wins in all of Saturday’s youth games as well.

The Rookie Flag division started the action at 10:30 a.m. As is the case with this division, there is no official scorekeeping and games are played in a wide open 5-on-5 format, so there is a lot of room for these kids to run. And run they did. #28 Thomas had three long touchdown runs in the game. Also contributing touchdowns (one each) were #14 Johnston and #3 Gonzales. The defense consisted of a few stops made by Thomas and Johnston, but the open space typically leads to many touchdowns for both teams. Coach Tyler said after the game, “It was a beautiful day for football, and a great game. The players are coming along.” 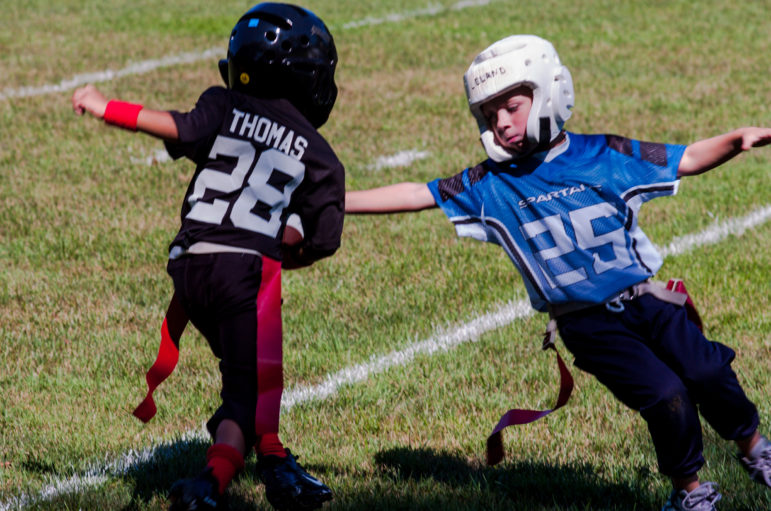 Thomas makes a nice inside cut on a defender en route to a touchdown. 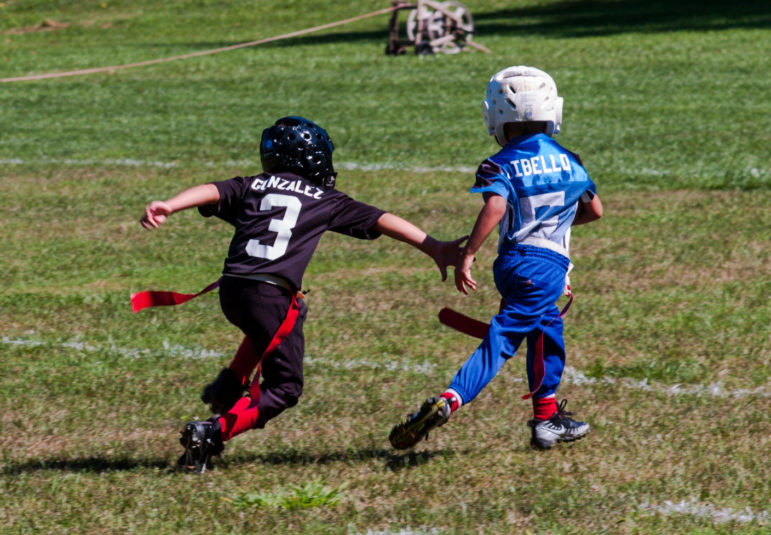 Gonzales makes a diving attempt at a flag pull to save a touchdown. 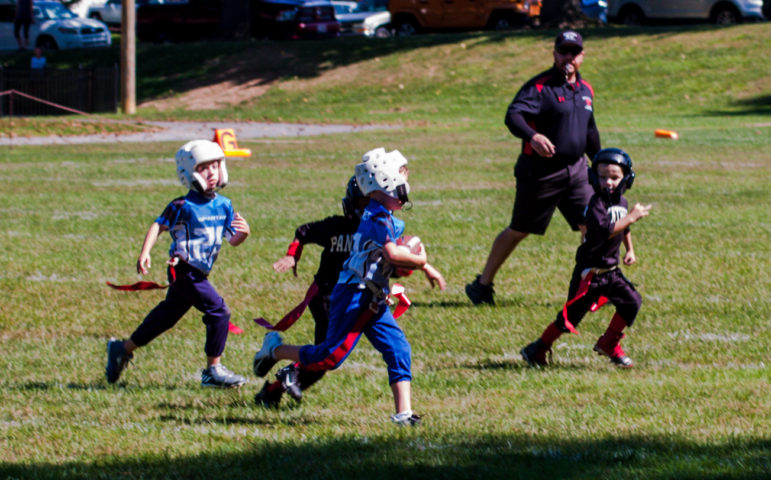 Cooney charges into the end zone to score. 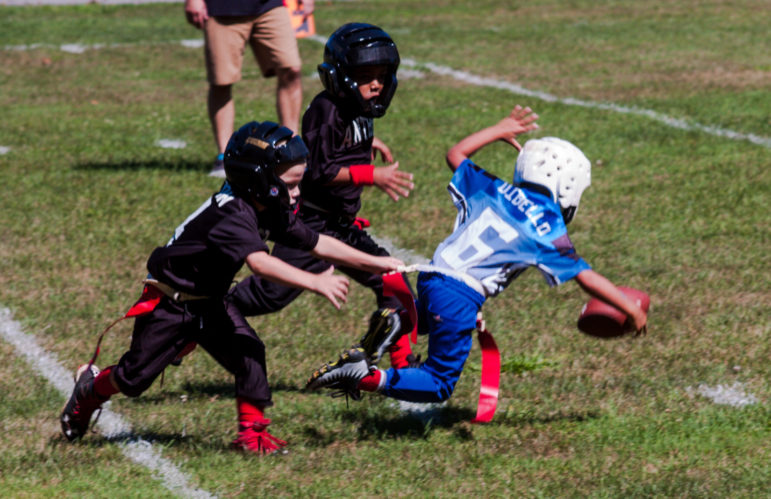 A pair of Panther defenders make a stop on a falling Spartan runner.

The Competitive Flag division came out next. Their games are full 11-11 football without any type of kicking. The Panther defense was paced by Jaze Szlachtianshyn, who recorded four flag pulls, one for loss. Jaxson Walser also had himself a game by recording three stops in a row with two of those for loss. The Panthers scored on an exciting 70 yard run by Luke Peters, and another lengthy score by Jayden Reifinger, but the Southern Lehigh Spartans who the coach says run a year-round flag program are always well-prepared and hard to play against. Coach also said that the young Panther team played well, and the coaches are more worried about teaching the fundamentals of football, in addition to the values of good sportsmanship versus winning or losing.

The Competitive Flag team bursts through the banner onto the field, eager to start their season. 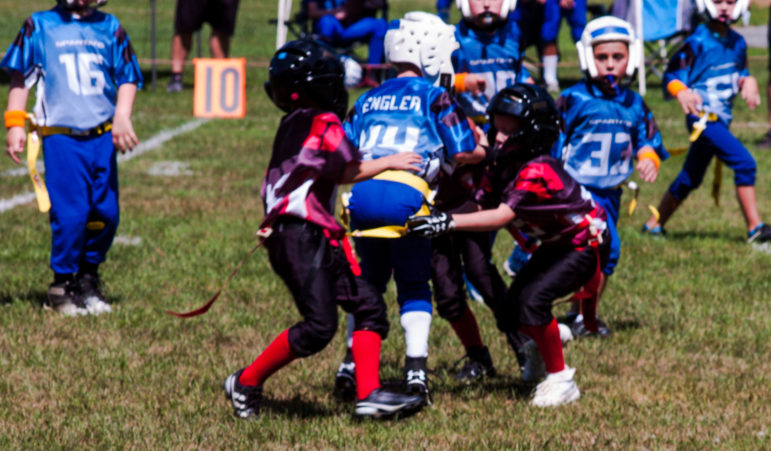 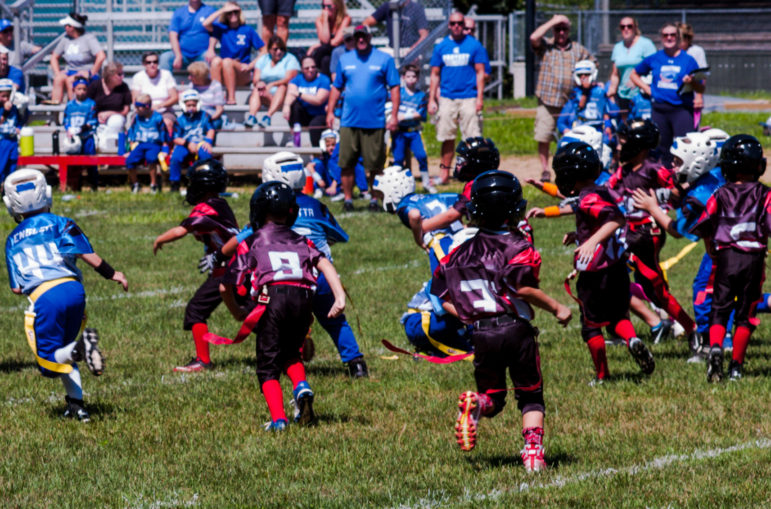 Luke Peters finds a crease up the middle for a 70-yard touchdown run. 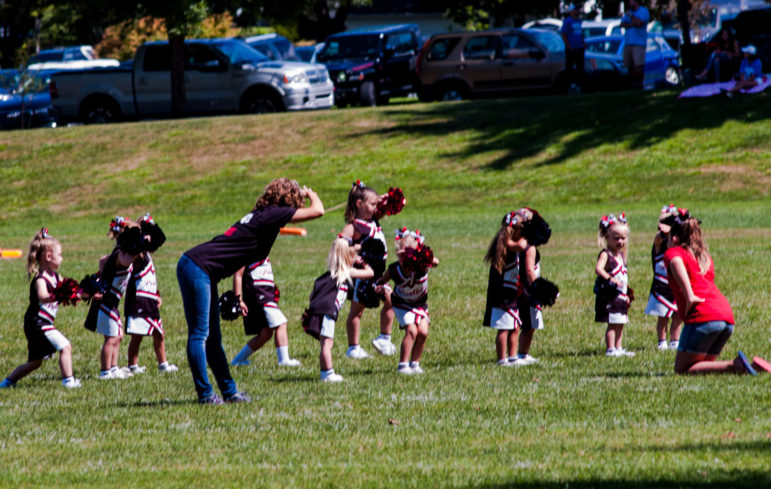 The youngest group of cheerleaders perform for haltime. 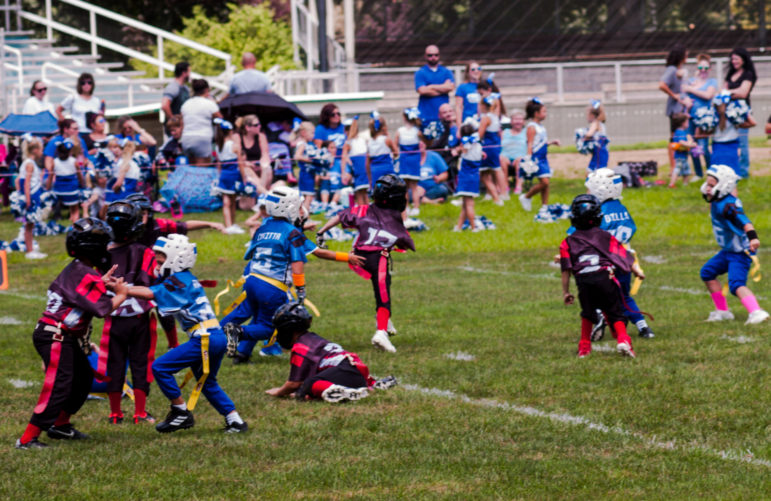 Jayden Reifinger weaves through the Southern Lehigh defense to score. 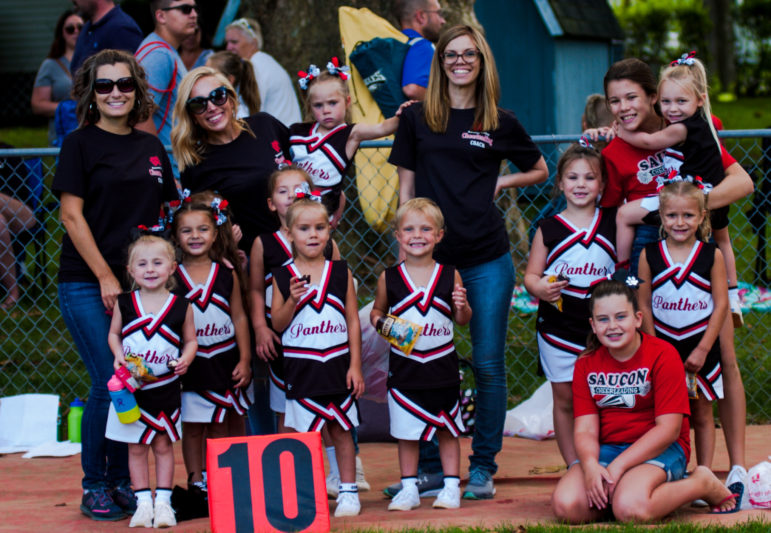 The 2019 Competitive Flag cheer squad poses for a group shot after the game.

The Junior Varsity division got their crack at the Spartans and played very hard with stout defense, holding the visiting Spartans to a scoreless tie at the end of the first quarter. Many players contributed tackles on defense as the leaders for the week were all tied with three apiece: Brayden Frey, Taylor Rohn and Jaylen Caballero. Other players who notched two tackles each included Jacob Peters and Elijah Szlachtianshyn, who also recovered a fumble early in the game. Both offenses were held pretty well in check for most of the game, but the Spartans scored seven points in the 2nd quarter and then added six in the 4th, while their defense came up slightly bigger, allowing only one score–a 53-yard run by Grayson Schmell–handing the Panthers a close 13-6 defeat. 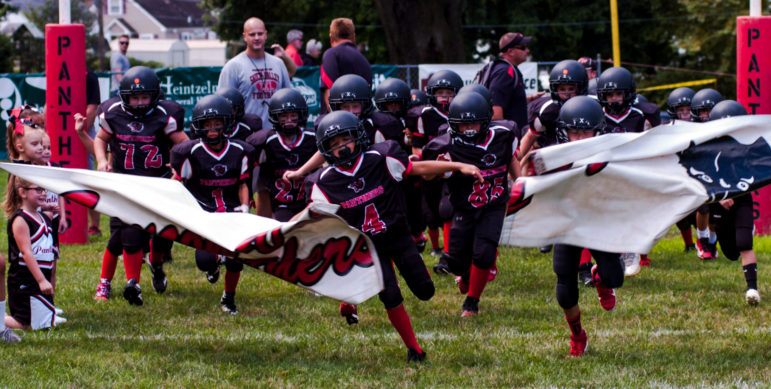 The Junior Varsity squad was fired up for the season as they tore through the Panther banner. 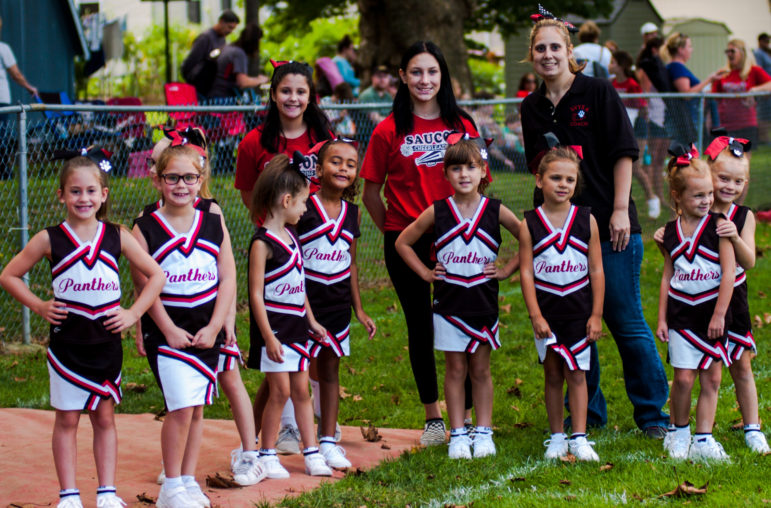 The 2019 Junior Varisty cheerleaders pose for a photo. 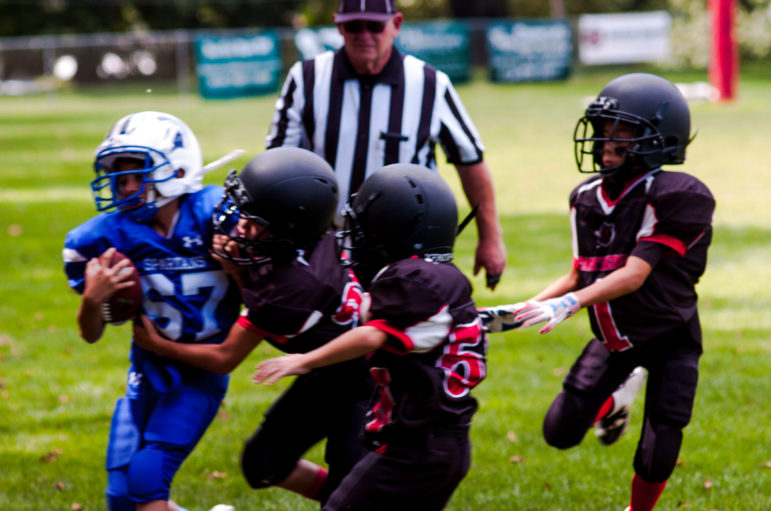 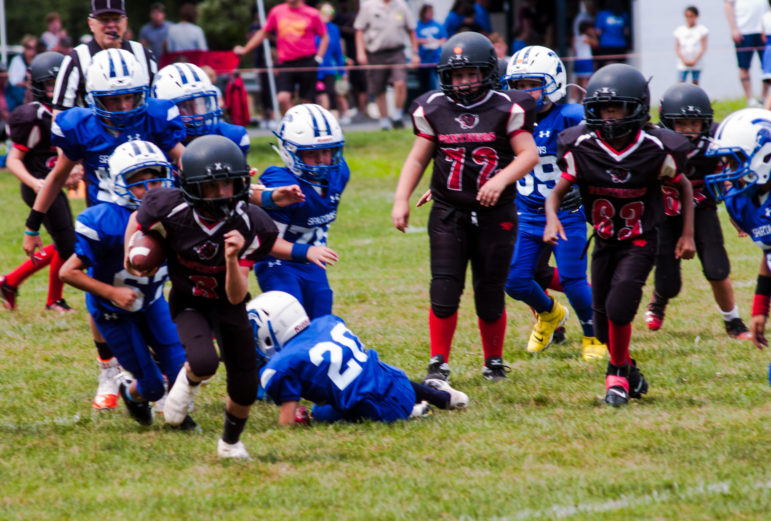 #3 Taylor Rohn takes a carry to the near side while #72 Daniel Janis and #63 Sahalay Hernandez look to assist with more blocking. 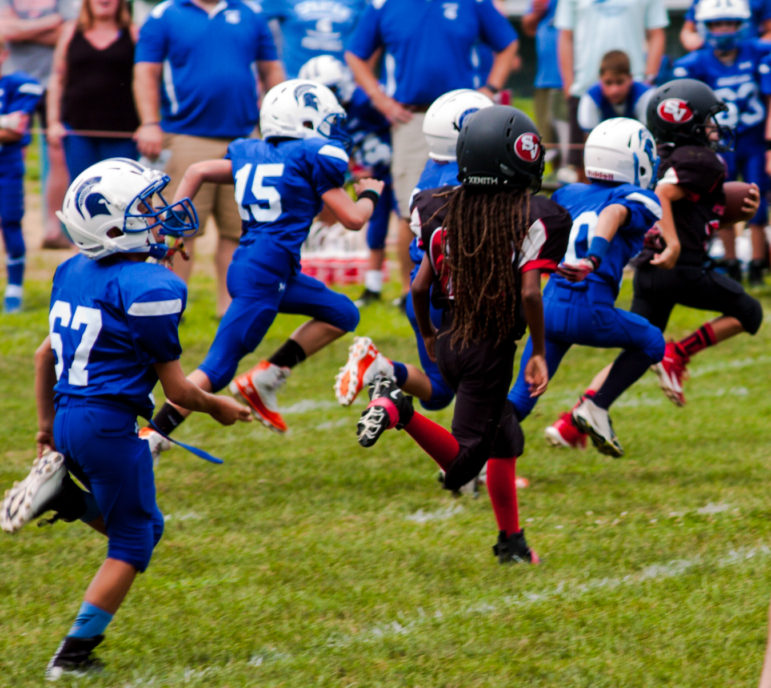 #20 Grayson Schmell breaks to the far side for a 53-yard touchdown run. 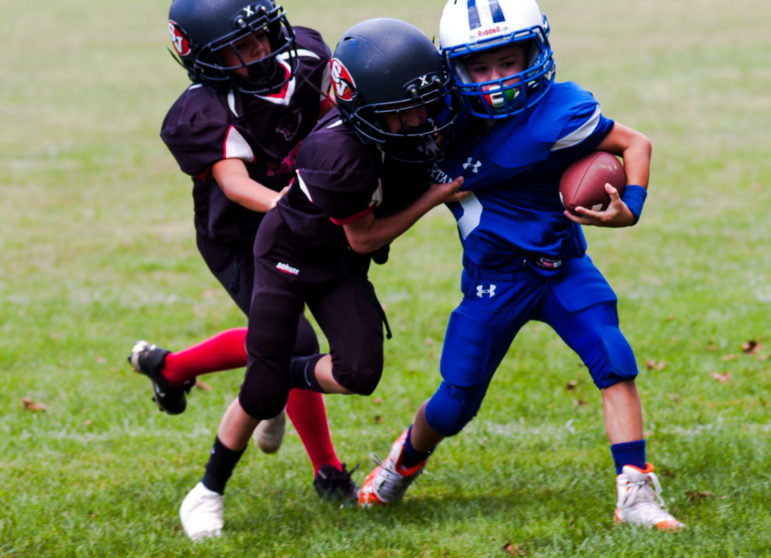 #3 Taylor Roh, and #4 Jaylen Caballero combine for a tackle. 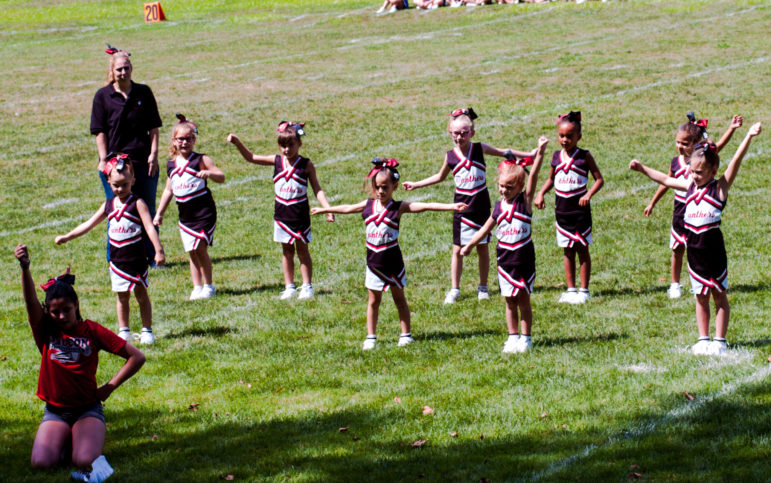 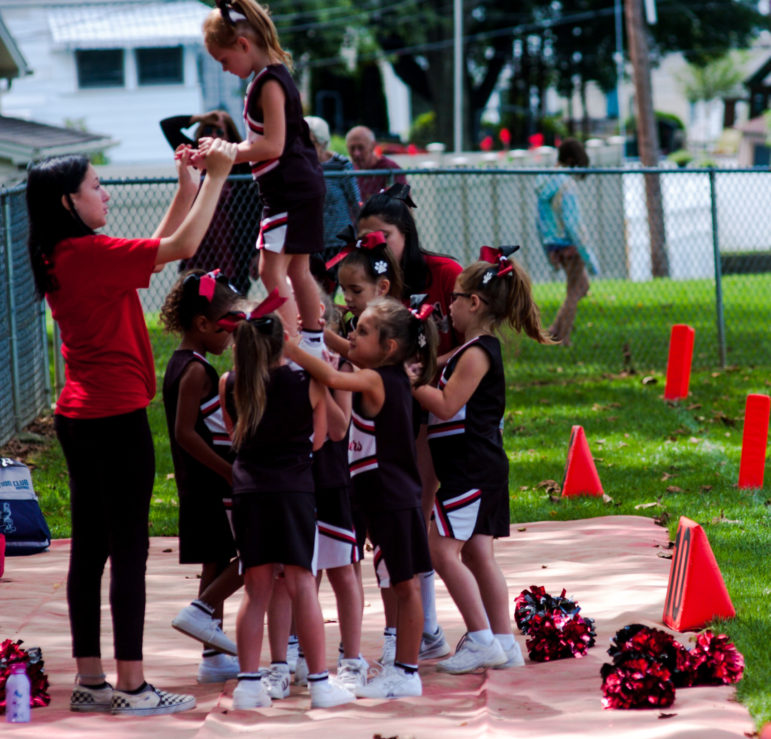 The Junior Varsity Cheer squad completes a lift on the sideline.

The defending league champion Varsity squad got their chance next, and held the Spartans to a close first quarter score, when they were down 7-0. The Panthers were gaining some yards on the ground but couldn’t get through a very stingy and physical Southern Lehigh defense, playing to a halftime deficit of 14-0. The Panthers’ offense consisted of a committee approach, which resulted in Jackson Albert leading the way with 70 yards, including a 62-yard touchdown. Zakary Zeigler ran for 27 on three carries, and Hector Mateo added nine more yards on two carries. Despite the hard work on offense and the defensive effort led by Jackson Albert, Frank DiRusso and Jakob Zeigler–all with four tackles each–Hector Mateo with three including a sack, and two each for Brady Flores and Anthony Maholland, the Panthers caved to the Spartans by a final score of 27-6. 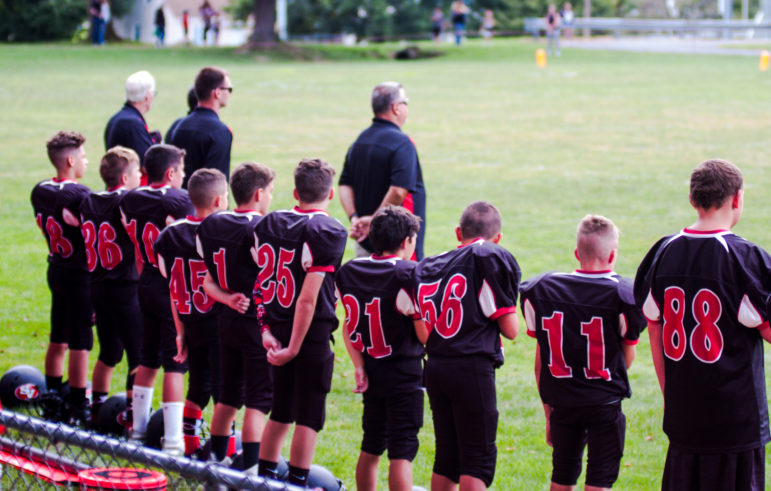 The Varsity squad pays respect to the flag during the National Anthem. 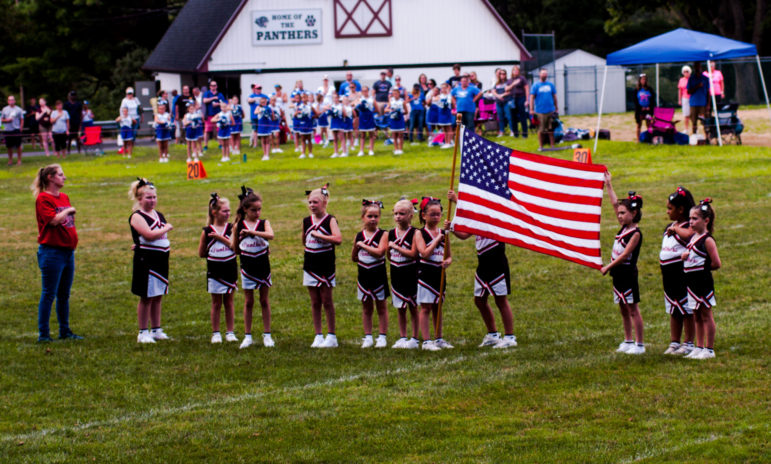 The Varsity Cheer squad holds the flag for the National Anthem. 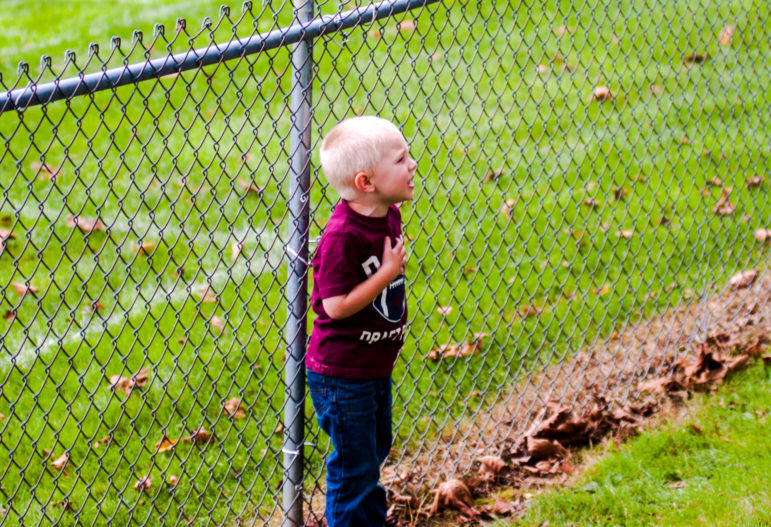 This future singing star led the audience for the Star-Spangled Banner. 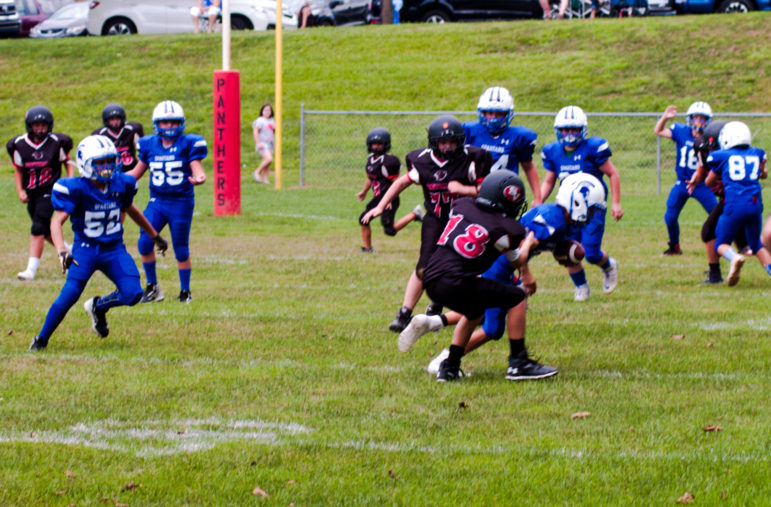 #18 Hector Mateo records an early sack on the Spartan quarterback. 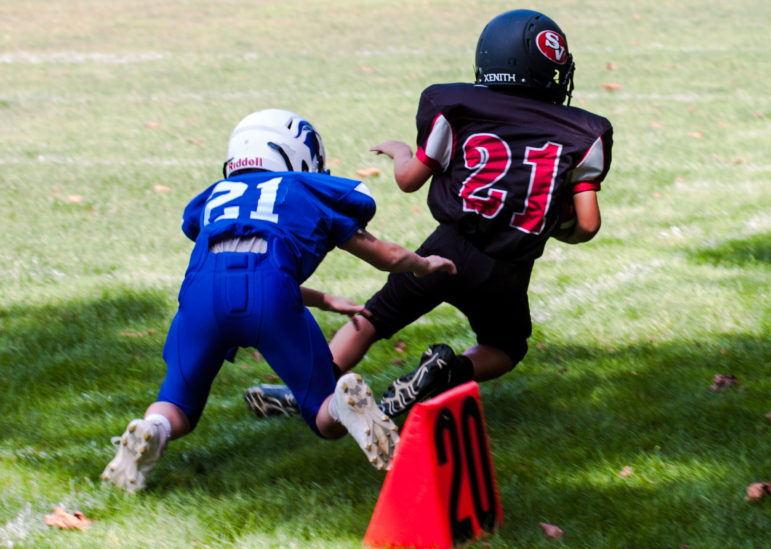 #21 Zakary Zeigler gets pushed out of bounds by the last defender who could have caught him on a big 23-yard gain. 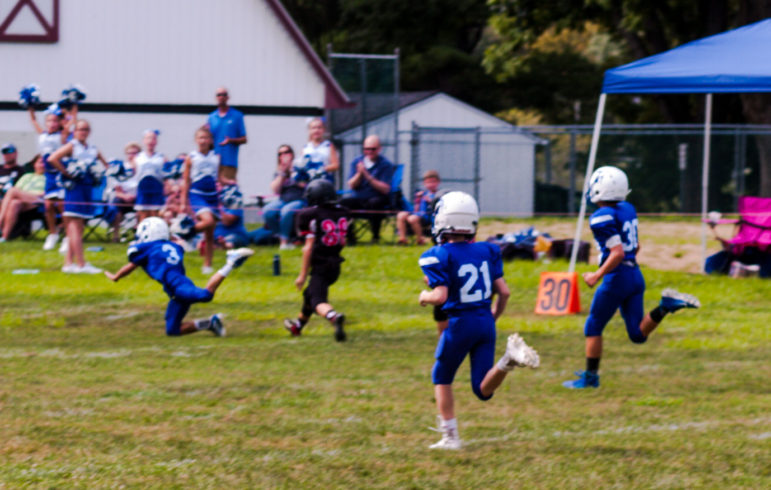 #36 Jackson Albert makes a touchdown-saving stop with a big hit from behind. 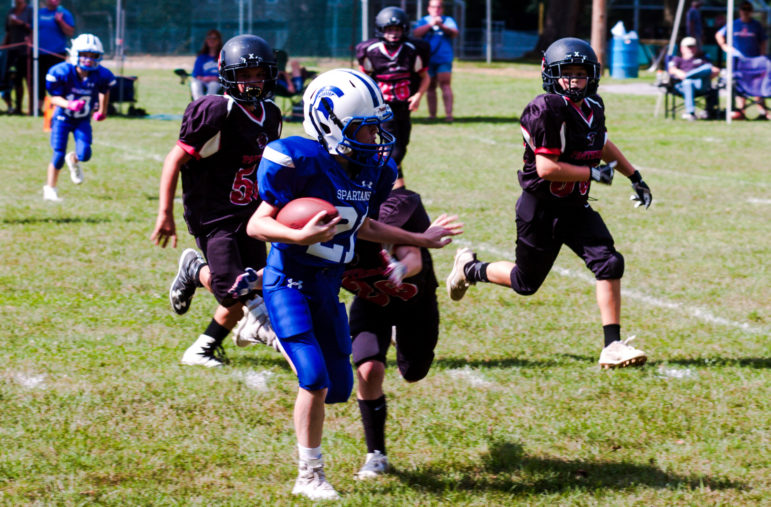 #26 Frank DiRusso, about to take down a Southern Lehigh runner. 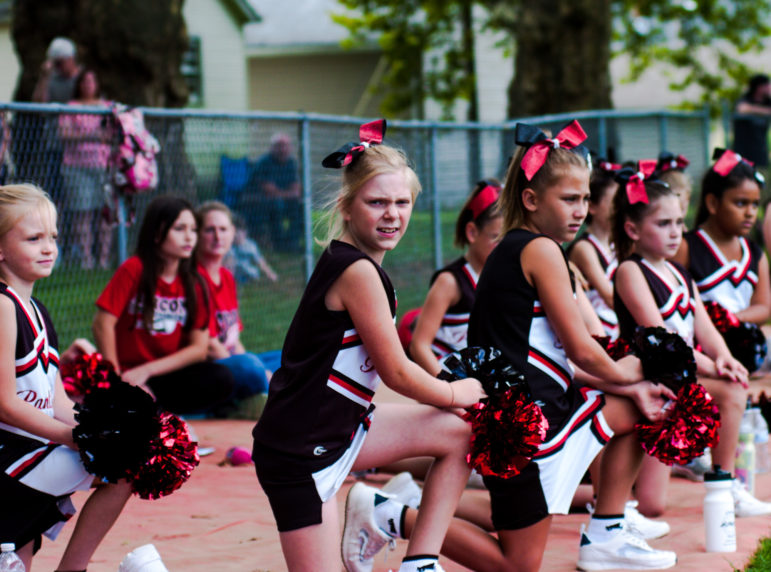 As the game winds down the cheerleaders take a knee.

UPDATE: The kickoff times for Saturday’s (Aug. 31) games have changed. The kickoff for the Rookie Flags is at noon, the Competitive Flags play at 1 p.m., Junior Varsity kicks off at 2:30 p.m. and the Varsity game will begin at 4 p.m. The games are at Dimmick Park in Hellertown.