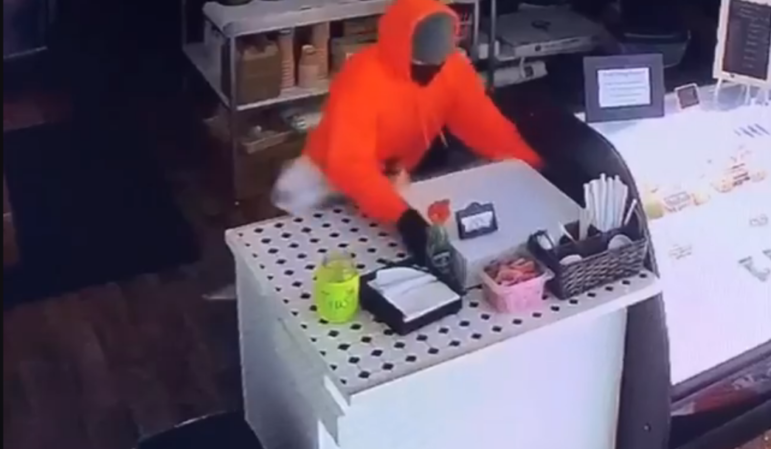 This surveillance video clip shared by the Bees Knees Bakery in Springfield Township on their Facebook page Thursday shows an unidentified masked intruder stealing the register from the business, which is located on Moyer Road just off Rt. 412 several miles south of Hellertown.

UPDATE: The Bees Knees Bakery Friday shared the following video update about the burglary on their Facebook page: “Apparently it was a team that did this. The burglar was dropped off by this semi. The guy walked around to try to avoid our cameras and came around the back of our bakery. The semi drove up the road and waited for him. We are working with law enforcement to get pictures of this semi’s DOT number. He must have drove down Main Street (in Springtown), between 4:15-4:30 a.m., so if anyone has a picture of the truck and can help us let us know! And thank you all for your outpouring of support! It means the world to our little bakery that we have such a great community around us!” The bakery has reopened for business and still plans to be a vendor at the Saucon Harvest Festival, which will be held in Hellertown’s Dimmick Park Saturday starting at noon, according to the latest Facebook update.

A new bakery in Springfield Township, Bucks Couny, just south of Hellertown, reported via Facebook posts on their business page Thursday that it was vandalized and burgled by a masked, armed intruder overnight.

The Bees Knees Bakery at 3001 Moyer Road has only been open since early July.

In one post, the owners shared a photo of a shattered glass door and said the business would be closed Thursday as a result of the break-in.

In a subsequent post, they shared surveillance video from inside the store.

The soundless video shows a masked man dressed in dark pants, a blaze orange hooded sweatshirt and a grey beanie walking toward the front counter area, where he knocks a point-of-sale (POS) touchscreen to the floor before snatching the cash register underneath it off the counter and fleeing.

The video–which apparently captures the theft from start to finish and is embedded below–is only 11 seconds long.

Owners Nicole Zane and Dennis O’Connell–who also own the farm that’s attached to the bakery–shared this account of what happened in that post:

The robbery took place at 4:12 a.m. this morning. He parked on the road, walked through the woods and avoided our cameras as best as possible. He covered his face so it would be harder to identify him and he was armed. If you have any information, it would be greatly appreciated! We will keep you all updated if there are any developments.

In the comments on both posts there has already been an outpouring of support for the business, which has gained a local following for its scratch-made baked goods, ice cream and other foods.

“I love this place. They work hard and make wonderful treats and an honest living. This makes me so angry,” commented Victoria Wolfe.

“That sucks!” wrote Phil Cortese. “Those people are just starting out and trying to run a nice business here! I’m going to visit them for support hope everyone will join me.”

The bakery is located in Springfield Township, whose police department has a website whereby anonymous tips can be submitted.