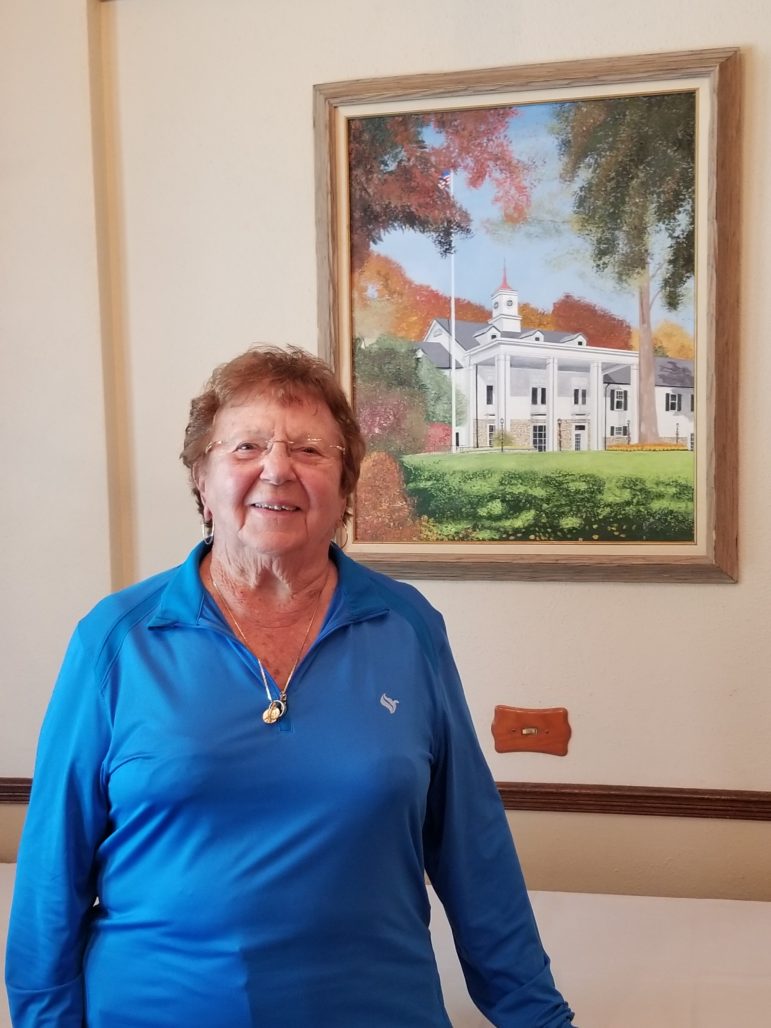 At 93, Steel Club golfer Shirley Kitchen of Bethlehem is still going strong. Both on and off the links she maintains an active lifestyle that inspires the women with whom she regularly plays.

Shirley Kitchen is a woman who isn’t afraid to try new things.

Although she had never golfed before, she decided to take up the sport in her fifties, and without any formal lessons went on to become a passionate and competitive player.

Today at 93, Kitchen is still going strong both on and off the links at Steel Club in Hellertown, where she’s a beloved member of the club’s ladies golf league.

“She is amazing,” said Ladies League president Donna Leon at a league luncheon held at the club Thursday. “I want to be her when I grow up,” she said with a laugh.

Leon added that the club’s other members feel exactly the same way about Kitchen, who not only drives herself to functions, but also picks up others on the way. She also plays pinochle twice a week and takes both a bus and train to visit her daughter in Virginia.

Kitchen explained that she was living in Columbia, N.J., when she first decided to pick up a golf club at the Blair Academy course in Blairstown. Some of the men who regularly played there were happy to give her pointers, and she began to practice diligently.

At that time, Steel Club was known as Silver Creek Country Club, and Kitchen and her husband–who’d retired from the U.S. Navy–became charter members in the mid-1980s.

After five years of commuting to the club from their home in Warren County, they felt they had found their new home and decided to move to Bethlehem; a decision she called “the best we ever made.”

“I love golf,” Kitchen said without hesitation, following the luncheon and after having played a full round earlier in the day. “If I wouldn’t be playing golf I would be sitting home doing nothing.”

It’s that enthusiastic spirit that has endeared her to so many within the tight-knit local ladies golf community, Leon observed.

She noted that Kitchen played all three days of the league’s recent Pro’s Cup, an end-of-season tournament in which the 16 top players from the 2019 season compete.

“We love playing with her,” Leon said.

Kitchen said she also enjoys being a member of the Golf Association of Philadelphia, which has allowed her access to some of the “prestige clubs” in southeastern Pennsylvania and beyond.

In her career she’s had three holes-in-one, she noted proudly; one at Blair Academy’s course; one at Apple Mountain Golf Course in Belvidere, N.J.; and one at Steel Club.

And perhaps there are more in her future, since Kitchen shows no signs of slowing down.

“It’s the camaraderie that makes it wonderful,” she said, before adding that she considers herself a competitive player, but doesn’t mind losing, either.

She normally competes against other women, but golf “is even more fun to play with a man,” she joked, “because you concentrate and play better.”

“I am very grateful,” Kitchen said. “I am certainly blessed.”