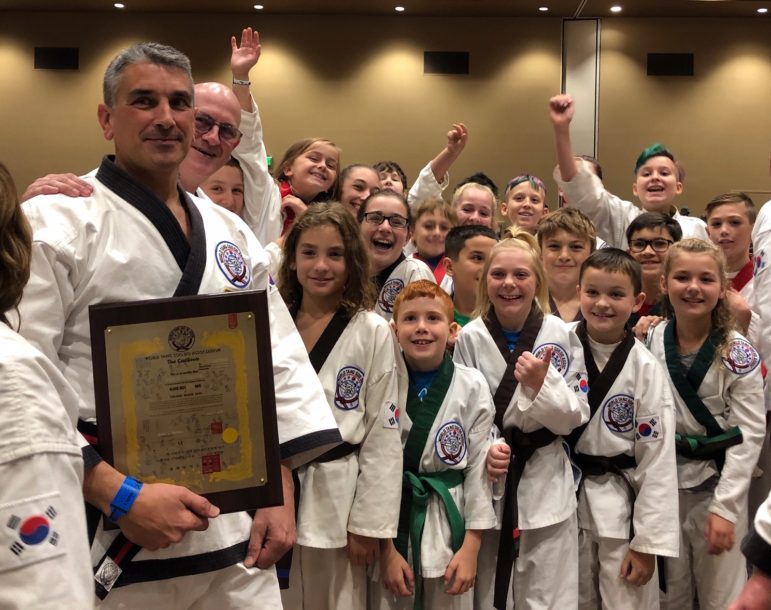 Master Philip Geiter (left), owner of Saucon Valley Karate Academy, with some of his many students at the championship held recently in the Poconos.

Saucon Valley Karate Academy is owned and operated by Master Philip J. Geiter, who was promoted to 5th degree Master at the championship. He was also awarded the 2019 Master of the Year for Region 8 of the World Tang Soo Association. SVKA also promoted Shawn Barger to 2nd degree Black Belt and Chloe J. to 1st degree Black Belt.

The championship is a traditional event for members conducted annually for the past 36 years by Region 8 of the World Tang Soo Do Association. Region 8 includes studios in eastern and central Pennsylvania, Maryland, Delaware, New Jersey, New York and northern Virginia.

The competition drew 742 participants from Region 8 and beyond this year, and both World Tang Soo Do Grandmaster Robert Beaudoin and Grandmaster William Strong were in attendance.

Master Geiter holds the international rank of Master, 5th degree in Tang Soo Do, which is a traditional form of Korean martial arts. He founded Saucon Valley Karate Academy in 2013, and with determination, persistence, positive word-of-mouth and community support has since steadily increased enrollment to 150 students.

The program benefits all students by promoting self-confidence and leadership abilities in the junior instructors and by allowing newer students to see how assisting and giving back helps one move forward toward their goal of becoming a Black Belt.

Note: The information in this story comes from a Saucon Valley Karate Academy news release.