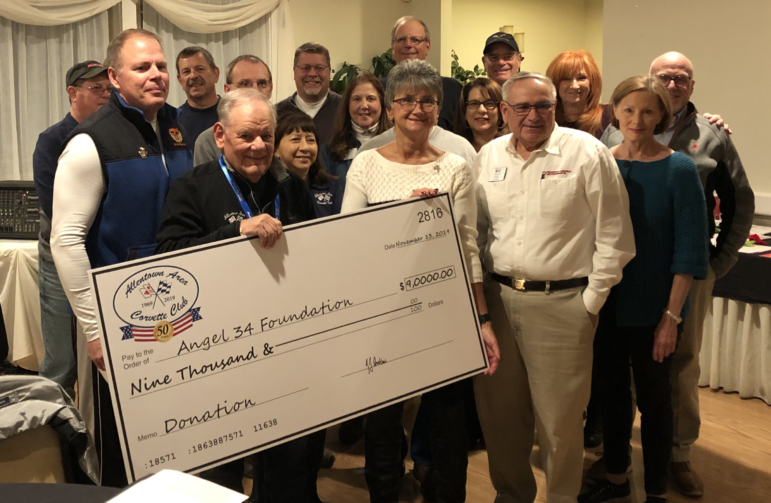 Members of the Allentown Area Corvette Club presented a check for $9,000 to Doug Sheriff (left) of the Angel 34 Foundation at Se-Wy-Co Fire Company in Lower Saucon Township Tuesday. The foundation provides support for local children with cancer and was founded in memory of Sheriff’s daughter, Nicole. The club has raised a total of $15,000 for the foundation this year.

Local Corvette owners have demonstrated they care about kids with cancer.

The Allentown Area Corvette Club, at its monthly meeting Nov. 12, presented the second of two checks totaling $15,000 to the Angel 34 Foundation, a local organization headquartered in Nazareth that serves children battling cancer in the Lehigh Valley and surrounding communities.

Funding for the checks–one for $6,000 and the second for $9,000–was raised at two very successful car shows, one (all Corvette) held in June at Penn State University, Lehigh Valley Campus in Center Valley, and the other (all GM vehicles) held in September at SteelStacks in Bethlehem.

Accepting the check was Doug Sheriff, father of Nicole Sheriff, who lost her battle with cancer in 2004 at the age of 15. Along with Nicole’s mother Linda, Sheriff–a former athletic director for Saucon Valley School District–has spent nearly 15 years working to help preserve his daughter’s memory with a living legacy of support for other pediatric cancer patients.

The check was presented to Sheriff by Mike Cutro, past club president and present chairman of the board; David Hausman, chairperson of the June Springfest show; and Joseph Iervolino, club president, along with members of the club’s Springfest committee and Fall Show organizers.

The Allentown Area Corvette Club is a not-for-profit organization and together with its 250 members, is dedicated to celebrating the enjoyment of the automobile for which their club is named. The club celebrated its fiftieth year as a club in September. Angel 34 is the chosen charity for all of their fundraising events.