Note: This story has been updated with additional information from board president Shamim Pakzad.

It’s not every day that the president of a school board calls for the resignation of a school district superintendent–in another school district. That’s what happened, however, at a Saucon Valley School Board meeting held Tuesday. 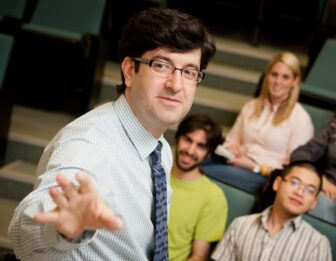 Saucon Valley School Board president Shamim Pakzad was elected to the board in 2017. (FILE PHOTO)

School board president Shamim Pakzad said he was responding to a recent remark by Bethlehem Area School District superintendent Joseph Roy, in which Roy said racism and classism are motivating decisions by some local parents to enroll their children in charter schools.

“Some parents send their kids from urban districts to certain charters to avoid having their kids be with kids coming from poverty or kids with skin that doesn’t look like theirs. That’s a fact,” was the quote Pakzad attributed to Roy, which he read at the meeting.

“I have two boys. Both of them go to public schools,” Pakzad said, explaining that one attends Saucon Valley and the other attends a local charter school, Lehigh Valley Academy.

“My eight-year-old heard about this as soon as I picked him up from the bus stop. He told me he is very sad that someone has called him racist because he goes to LVA. I explained to him that he wasn’t being called racist but us, his parents. I’m personally offended. I’m shocked and appalled by what this superintendent said,” Pakzad said.

“The discussion about the merits of charters and the funding models are valid discussions. We’ve had them before and we should continue to have those discussions,” he continued. “But this is a new low: throwing out personal assaults, accusing hundreds of thousands of families in this Commonwealth of being racist and elitist for the choice of the public school they see best for their kids. And by the way, this comes from a person who just a few months ago gave a convocation speech that was centered around tolerance and inclusion and racial harmony. Oh, so ironic. These people ought to apologize and should immediately step down from their leadership positions. They just don’t belong there anymore. What they said was ugly, it was divisive, and it was outside the bounds of human decency, and that’s a fact.”

Lehigh Valley Live reported Thursday that in response to Roy’s comment about the alleged role of racism in fueling charter school enrollment, a group of BASD parents has lodged a protest against the district and demanded a public apology from him.

In that story, the news site reported that Bethlehem Area School Board president Michael Faccinetto said he will issue a statement in response to Pakzad’s comments at Monday’s school board meeting, but will not address the protest from what he characterized as a “pro-charter group” of parents.

In a followup statement shared with Saucon Source Saturday, Pakzad said the following:

Bethlehem and Saucon are currently considering a charter application by Lehigh Valley Academy Charter School. Saucon has been approving such applications since 2002. Bethlehem has given every indication that they want to deny the application. This is the context of the accusation that parents send their kids to charter schools due to racial bias. The fact is this: Lehigh Valley Academy has 65 percent minority students, compared with Bethlehem’s 59 percent and Saucon’s 17 percent minority student population. So parents who send their kids from either of these two districts to LVA are achieving the exact opposite of what was suggested, as their kids end up in a more racially diverse environment. To suggest otherwise, while knowing the actual statistics is just irresponsible.

The next Saucon Valley School Board meeting will be he held Tuesday, Jan. 14 at 7 p.m. in the high school Audion room. Meetings are open to the public and draft meeting agendas are published in advance on the school board page of the district’s website.