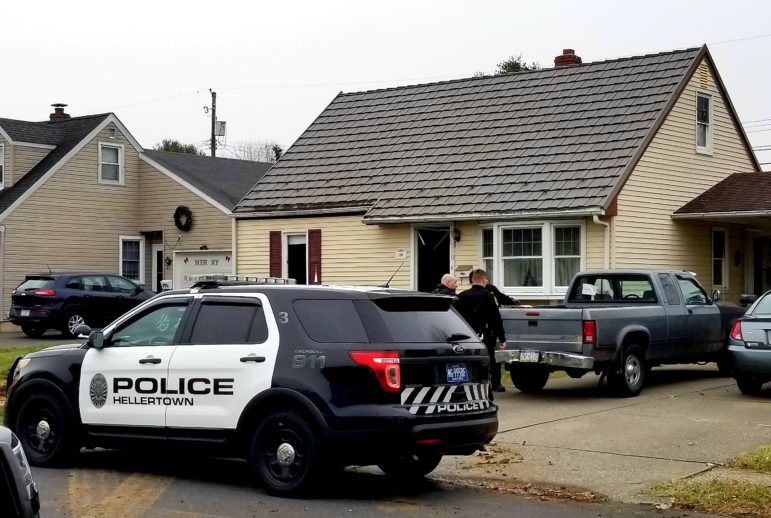 A home in the 500 block of Spruce Street in Hellertown borough was the scene of a standoff overnight Sunday into Monday. Following the standoff Justin Novak, 35, of Freemansburg, was arrested and charged with Terroristic Threats, according to court documents.

A 35-year-old Freemansburg man was charged Monday in connection with a 12-hour-plus standoff incident on Spruce Street that closed Saucon Valley roads, shuttered schools and alarmed many borough residents.

Justin Novak, of the 200 block of Juniata Street, is charged with one misdemeanor count of Terroristic Threats with Intent to Terrorize Another in the incident, which began Sunday evening and lasted into Monday morning, when it ended with his arrest shortly after 9 a.m.

According to a police criminal complaint filed in Northampton County District Court by Cpl. John Donato of the Hellertown Police Department, the incident began when Donato was dispatched to a home in the 1500 block of Washington Street in Hellertown “for a distress call involving a male, identified by the caller as Justin Novak, threatening to break into the residence with an ax and kill the caller…with a handgun.”

“The victim stated she was advised of the threat by the defendant’s grandmother,” Donato wrote in the affidavit of probable cause that is contained within the complaint.

Donato said he then interviewed Novak’s grandmother, who lives in the Hellertown home where the standoff occurred, and obtained a written statement from her in which she described Novak “loading a firearm and stating he was going to take care of (the caller).”

According to the affidavit, Donato then spoke with Novak, who he said was by then “barricaded” inside his grandmother’s home.

Donato said Novak “advised that he did not do anything and will not come out of the home.”

What followed was the lengthy standoff that involved Pennsylvania State Police tactical teams, the use of robots and finally the use of tear gas, as police worked diligently to extract Novak from the home without anyone being hurt, which they successfully did do.

According to online court records, Novak was committed to and remains confined at Northampton County Prison in lieu of $50,000 straight bail following a preliminary arraignment before District Judge Alan Mege Monday afternoon.

A preliminary hearing in his case is scheduled to be held before Mege in Northampton County District Court 03-2-04 in Lower Saucon Township on Friday, Dec. 27 at 9:30 a.m., according to court records.