Parents of Saucon Valley school students took to social media Monday morning to express frustration over an apparent lack of communication by district officials in response to a police standoff situation that’s been unfolding near the school district campus.

The police situation began Sunday evening in the 500 block of Spruce Street, which has been closed along with surrounding roads as authorities use a bullhorn to communicate with someone inside a home there. Police have released no information about the incident other than to tell people to avoid that area, with the Borough of Hellertown doing that in a tweet overnight. WFMZ published a story about the police situation earlier.

After that tweet at 4:43 a.m., which instructed people to avoid the area of Walnut Street and Rentzheimer Drive, the school district issued a notification shortly after 6 a.m. stating that schools would open as normal. 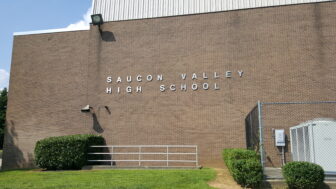 “Good morning Saucon Valley families this is Kristine Rosenberger, Assistant Superintendent for the Saucon Valley School District,” said the email that was shared with Saucon Source. “This morning we were contacted by local law enforcement and made aware of an event that is affecting a limited area of Hellertown. If you are a family that resides within that area you have been notified. All of our schools are open and operating as normal. Thank you.”

Sometime between then and a little over an hour later that decision was apparently reversed, although by that time some high school students had reportedly already arrived for classes and were put in a lockdown at the school, although parents were able to come retrieve them at the building.

There was confusion as other parents took their children to school only to be turned around by police and fire officials, with many reporting they had received no notification of the decision to close the schools until reading about it in media reports or hearing about it from their children who were turned away as they headed toward school.

After Saucon Source received numerous reports from parents of students who learned firsthand that Saucon Valley schools would be closed, we posted a message on our Facebook page alerting the community to the closure at 7:30 a.m., with many parents complaining on it that they felt left in the dark by the lack of communication about the decision to close schools.

“This was awesome,” wrote Greg Urban. “A robocall went out telling us that school was on. My wife dropped our son off at the HS. He calls me at work telling me that they closed after students were arriving. Luckily he is a bus rider so transportation was available to go back. But now he has no transportation to Vo-Tech.”

“Pretty bad when your kids call you to tell you whats going on and not the school!” wrote Sara Novak Zrinski in the comment thread on that post. “Absolutely ridiculous!!”

Other parents criticized the fact that kids were now walking back home in the area of the police standoff situation.

“I feel this was a really dumb decision to send them,” commented Erica Pursell. “Most kids there walk in that area so they said it was safe to walk and now it’s not safe n they’re sending them back home?! Pfff!”

“I think it’s crazy they would let kids walk when the police are telling us to shelter in place,” wrote Josh N Jess Weaver.

One district staff member commented that she wasn’t aware of the closure until reading the post on the Saucon Source Facebook page.

As of 8:20 a.m., parents reported that they were just learning of the closure via an automated call, which advised them that district staff are working to return kids home.

Another parent said she received an automated call in which the lack of a second earlier call was blamed on technical difficulties.

No social media was used by the district to communicate the schools’ open or closed status Monday. Instead, Saucon Valley officials relied on the use of all-calls (phone messages), text alerts and emails, which are typically distributed in batches and can thus result in information being disseminated more quickly to some people than to others.

Please note that this is a developing story. We will update it as new information becomes available.