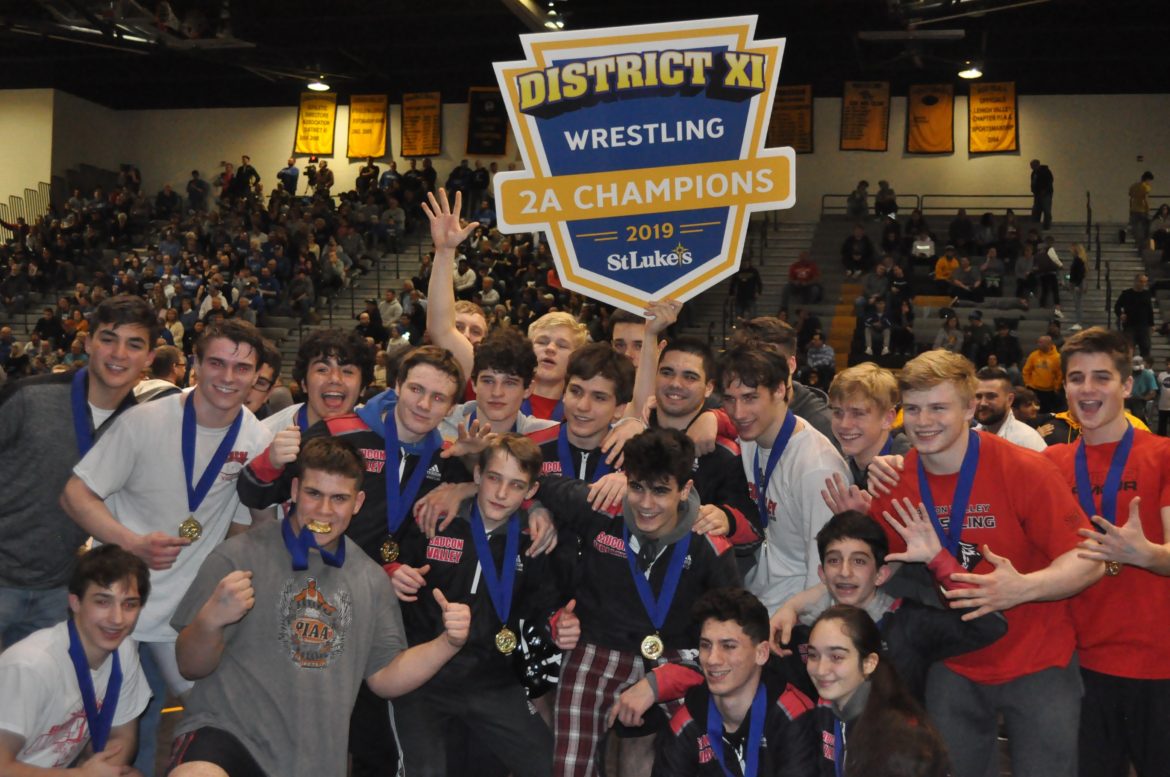 With Saturday night’s 33-30 victory over the Notre Dame Crusaders (12-2), the Saucon Valley Panthers (17-2) have won gold. It was an improbable victory as the Crusaders and their all-star lineup are responsible for Saucon’s two losses this season.  In the Colonial League opener back in December, Notre Dame took it to Saucon, 47-27.  Then, even though the gap narrowed, the Crusaders defeated the Panthers 41-33 in last week’s Colonial League championship.  On this night, however, the Panthers not only avenged those losses, but they secured their fifth consecutive District XI wrestling team title. 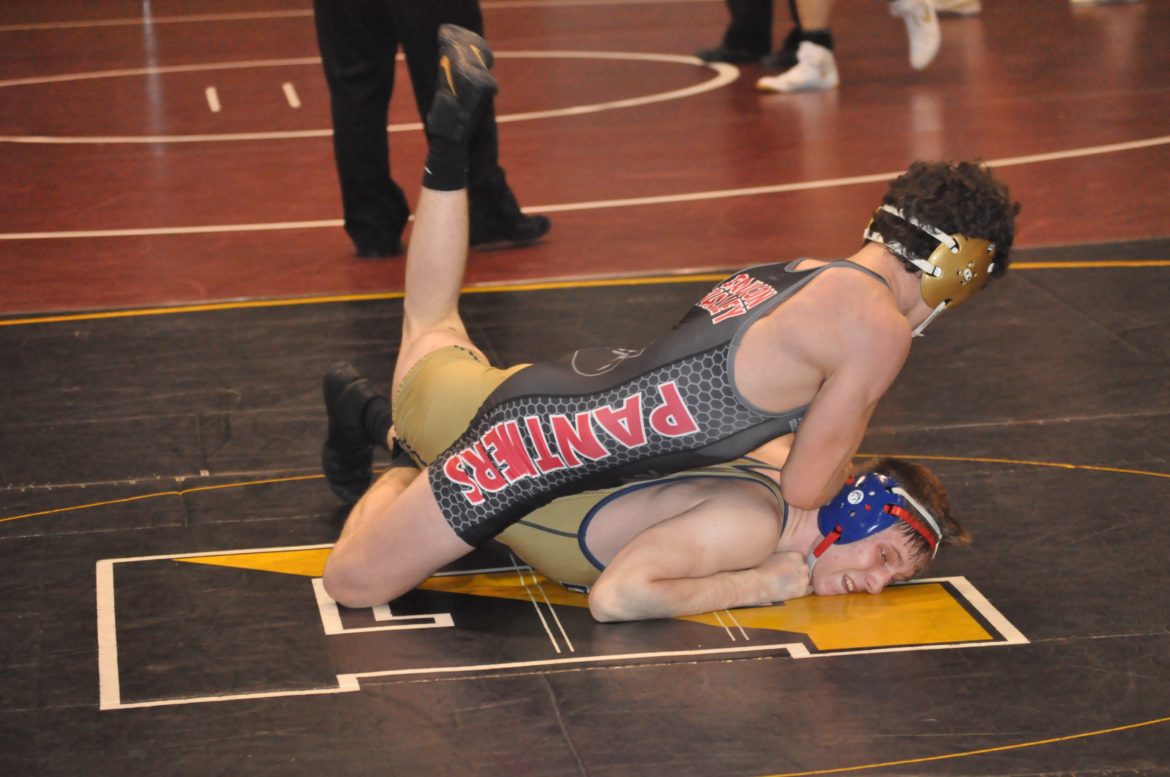 Panther freshman Tyler Pfizenmayer was out for a Saturday night ride.

With the match beginning at 152-pounds, the Panthers got off to a good start winning six of the first seven bouts through the upper-weights.  Saucon Valley picked up decisions in three of those bouts from Tyler Pfizenmayer (152), Dane Csencsits (195) and Braydyn Lugardo (220). 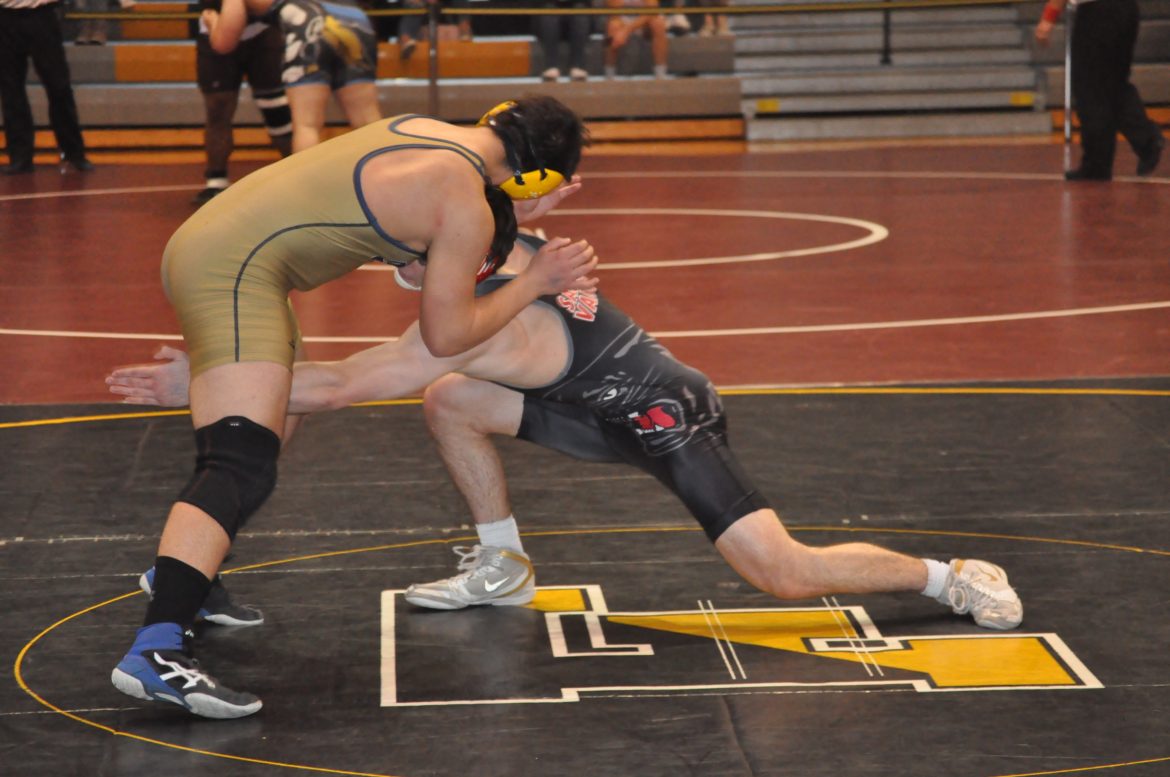 Saucon Valley’s Matt Arciuolo shoots in deep looking for a takedown in the District XI finals.

In addition, the Panthers gathered bonus points from Ty Csencsits (170), Matt Arciuolo (182) and Nick Warnke (285).  Csencsits, a sophomore appearing in his second match of the season after being sidelined by an injury sustained during the football season, was able to grind out a major-decision.  Arciuolo used seven takedowns and some near-fall points to register a tech-fall.  Tremors shook Freedom High School when Warnke incited a thunderous roar from the crowd after pinning his Crusader early in the second period.  The Panther run through the upper-weights gave Saucon a 24-6 lead at the halfway point of the match. 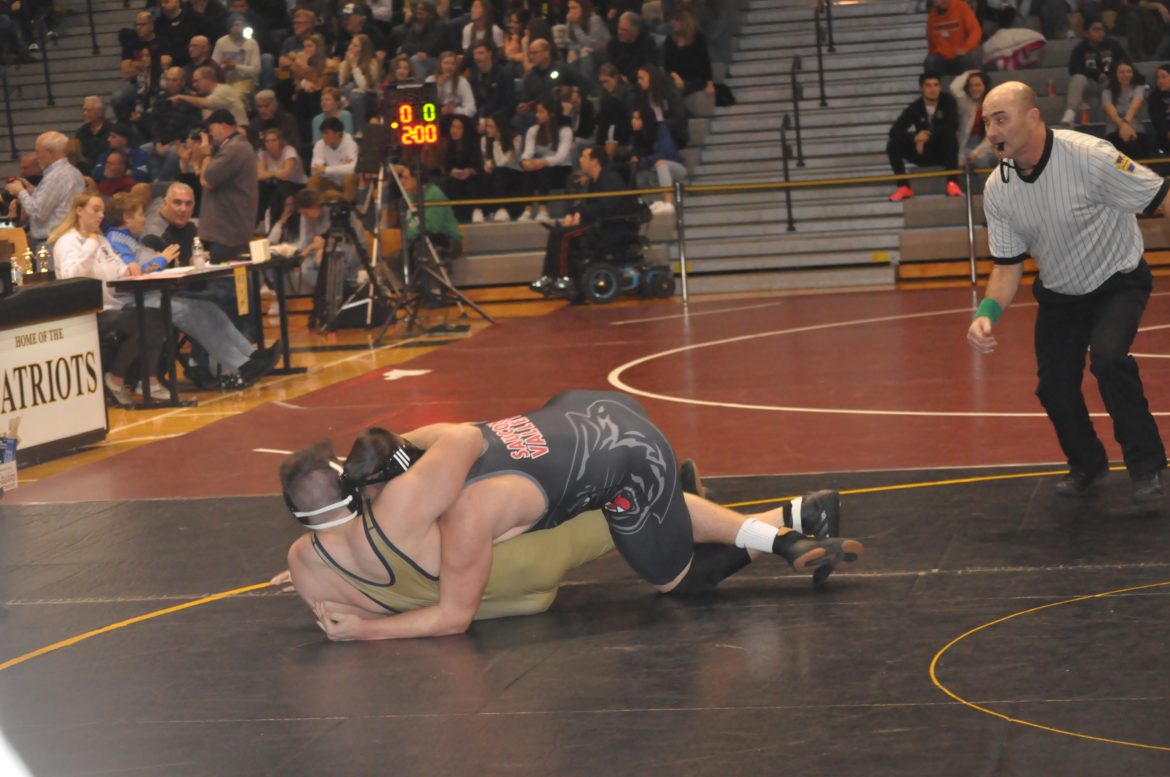 Panther senior Nick Warnke comes up big with a pin.

The Panther lead was extended to 30-6 when Notre Dame forfeited to Saucon Valley junior Aaliyanna Mateo (106).  Notre Dame, at the will of the Allentown Diocese, prohibits their male athletes to compete with female athletes. 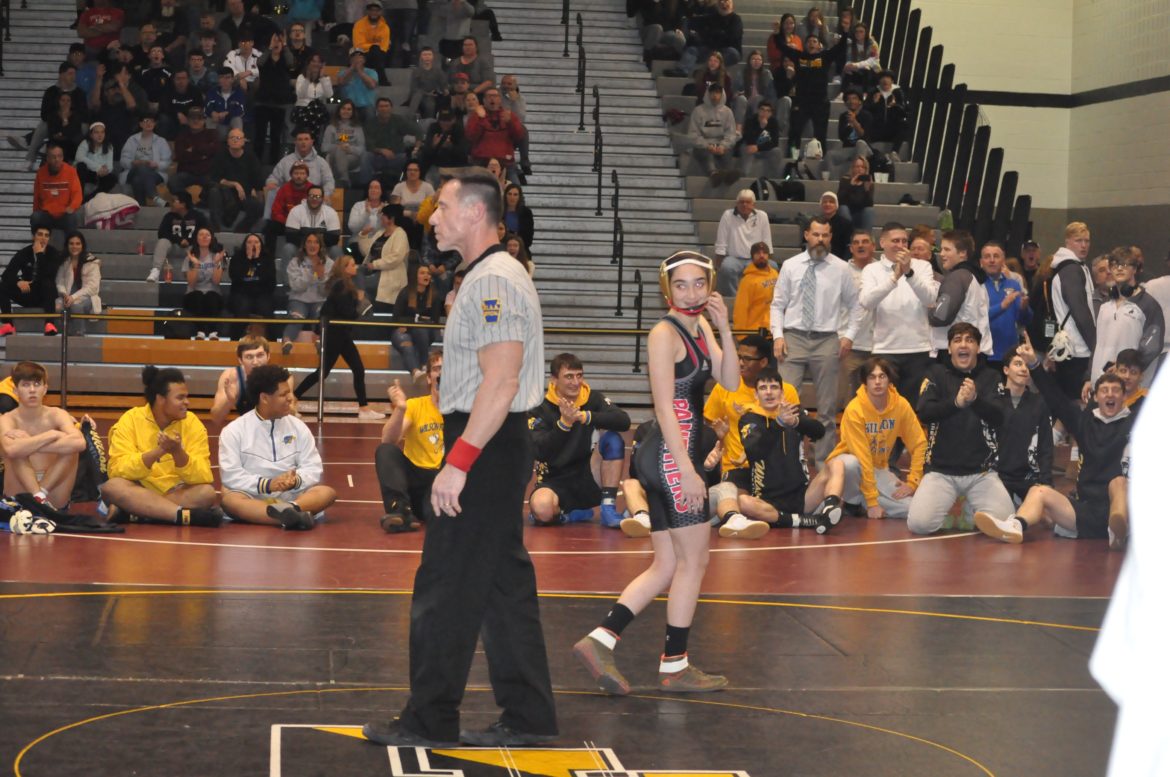 Aaliyanna Mateo is awarded the forfeit victory much to the enjoyment of many in a packed house. 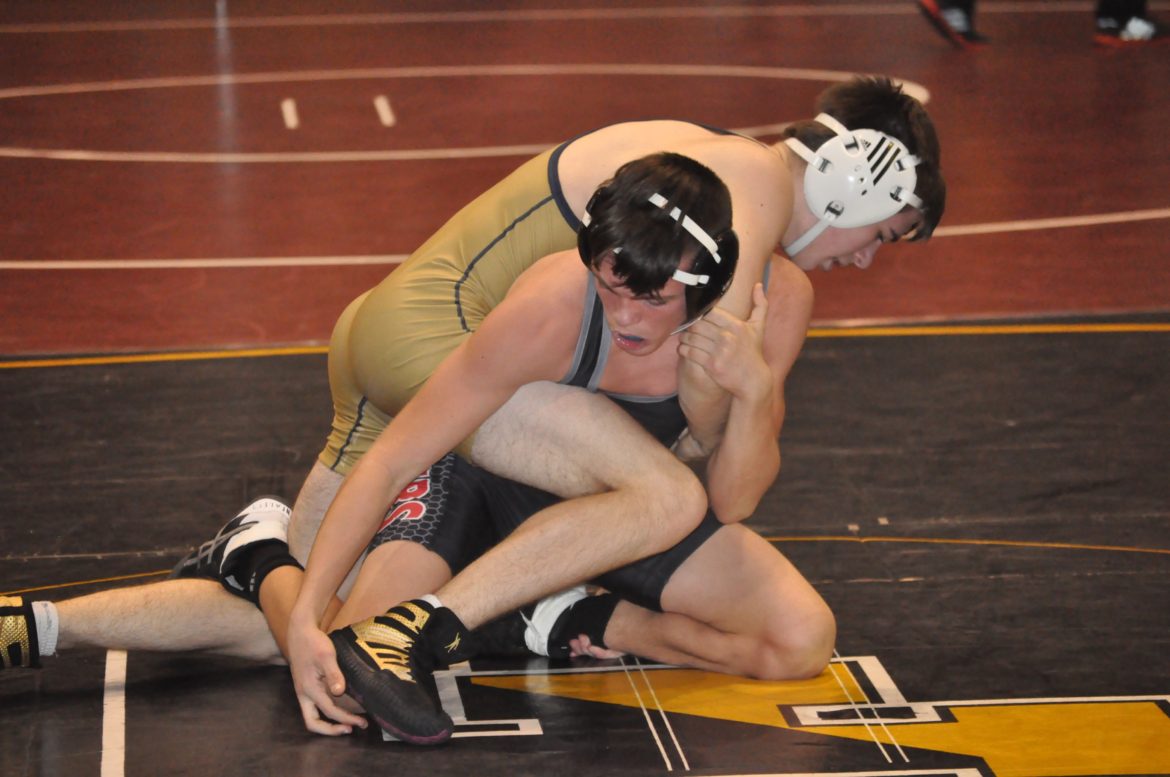 The Panthers Travis Riefenstahl trying to limit the Crusader damage.

The excitement, energy and emotion of the scene bordered somewhere between exasperation and rage as the matside intensity matched that of the battles taking place on center stage. Even though the Crusaders were rolling, Notre Dame’s coaching staff took exception to Saucon’s strategy of presenting Arciuolo for the 132 bout and then having him default.  Arciuolo has been injured and has not wrestled since January 11th.  The Panther gameplan was realized when Notre Dame called on Crookham as the answer for Arciuolo.  However, it seems as if Notre Dame would have preferred to use Crookham, a 2019 PIAA state champ, to take on Jake Jones at 138.  Arciuolo defaulted right as the bout began.  Sadly, it was at this point that police officers were called to station themselves between the Notre Dame and Saucon benches to tend the growing fire. 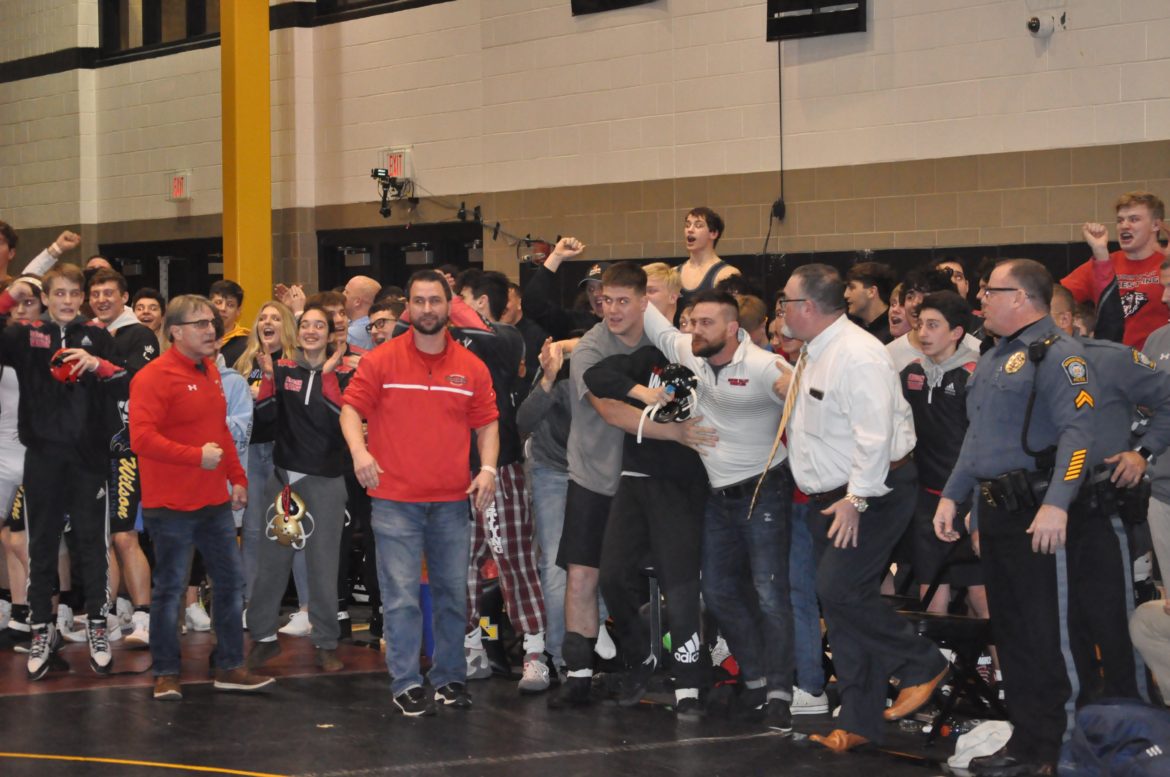 It was all-hands-on-deck to keep control at the 2020 District XI wrestling finals.

So, with a 30-27 score and two bouts to go, Saucon Valley’s Jake Jones and Notre Dame’s Josh Bauman took the mat.  Back in December these two battled each other with Jones winning 4-2 in overtime.  The two went to war again.  After a scoreless first period, Bauman took a 2-0 lead courtesy of a locked-hands call against Jones and an escape.  Jones answered with a takedown near the edge of the mat.  Bauman, however was able to escape and take a 3-2 lead into the final period.  Starting neutral Jones traded a takedown for an escape to create a 4-4 score.  Once again, at the edge of the mat, Jones was awarded a takedown just prior to time expiring to earn a 6-4 decision.  Jones’ victory  gave the Panthers a 33-27 advantage with only one bout to go.  Notre Dame’s Holden Garcia (145) would win a decision in the final bout of the night to make the score 33-30, but Jones’ victory essentially clinched the 2020 District XI team title for the Panthers.  It is the fifth consecutive District XI team title for the Panthers. 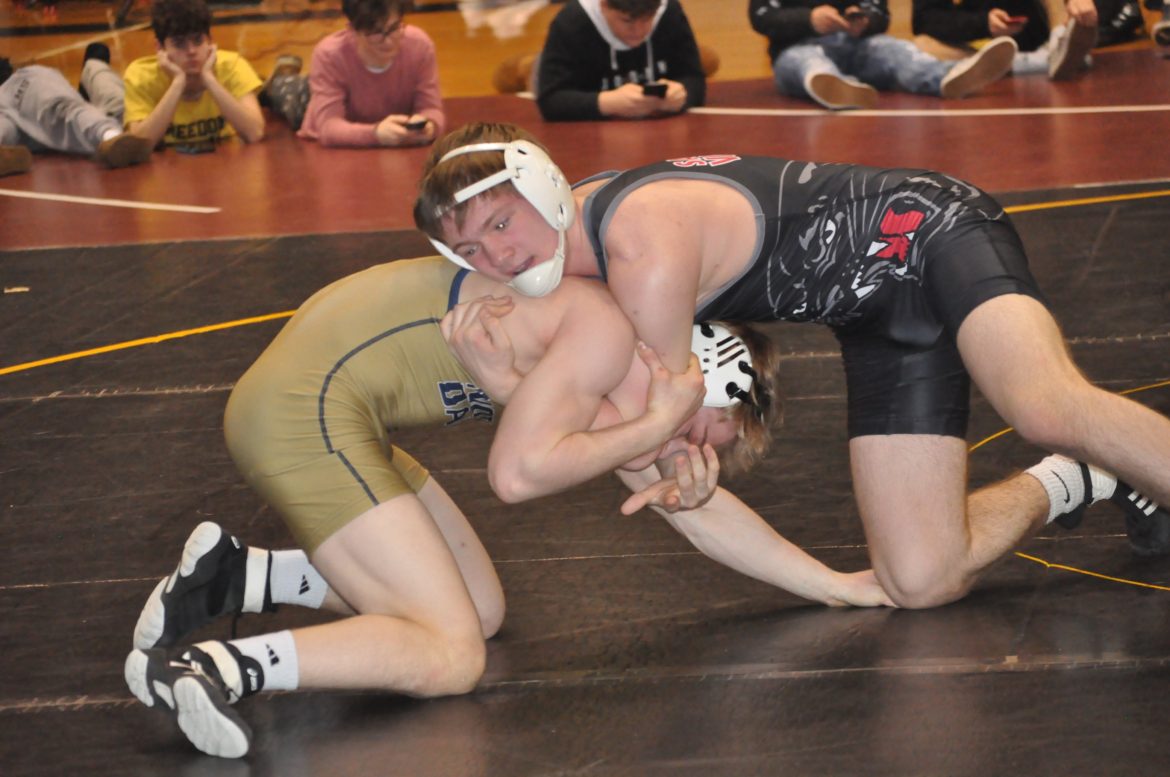 “It was great to see our team come together and fight through adversity last night.  I’m extremely proud of our kids and thankful for the overwhelming support from our community!” 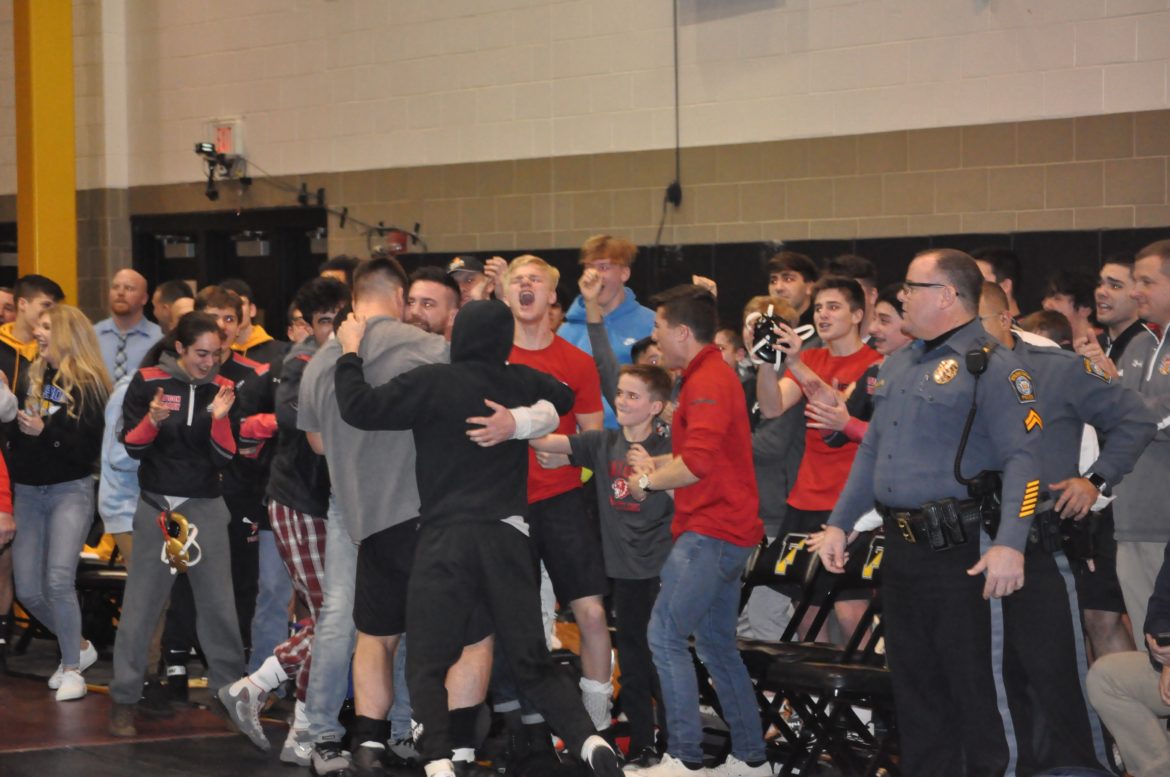 It seems this victory is much more than just competitive superiority. It was a statement of sorts.  The overwhelming support for Saucon from the public schools present was obvious.  Coaches, fans and wrestlers from Wilson, Catty, Liberty and Nazareth were obviously and enthusiastically streaming  their energy in favor of the Panthers.  The most telling evidence was seeing the entire Wilson Warrior wrestling program sitting adjacent to the Saucon bench awaiting a possible, true-second opportunity against the Panthers.  If Saucon would have lost, the Warriors would have had a chance to defeat the Panthers and head to Hershey as District XI’s runner-up.  But oddly (or not?), the Warrior faithful became the Panther faithful for a time.  Wilson seemed to have been swept away in support of Saucon Valley as Notre Dame’s chances for victory waned into the night.  Wilson wrestlers and fans were passionately cheering on their public school brethren.  Coach Shirk and the Saucon Valley program made a statement that is being embraced by public schools throughout the region and, no doubt, across the state.

Sadly, the public schools feel stranded and left to fend for themselves against the Frankenstein monsters allowed to live and grow in Pennsylvania’s high school sports world. Many private or borderless schools have evolved into star-studded programs who benefit from hollow restrictions regarding transfer and enrollment.  The PIAA’s policy of appeasement toward these programs has now manifested to a point where the public schools are thinking outside the box trying to level the playing field.  Shirk and staff’s strategies are the beginning of a whole new chapter in this tragedy.  It is time for Harrisburg and the PIAA to seriously think outside the box and step up to seriously resolve this growing problem.  If they continue to allow Frankenstein’s monsters to thrive, they will allow an avalanche of ugliness to overcome the high school sports landscape. 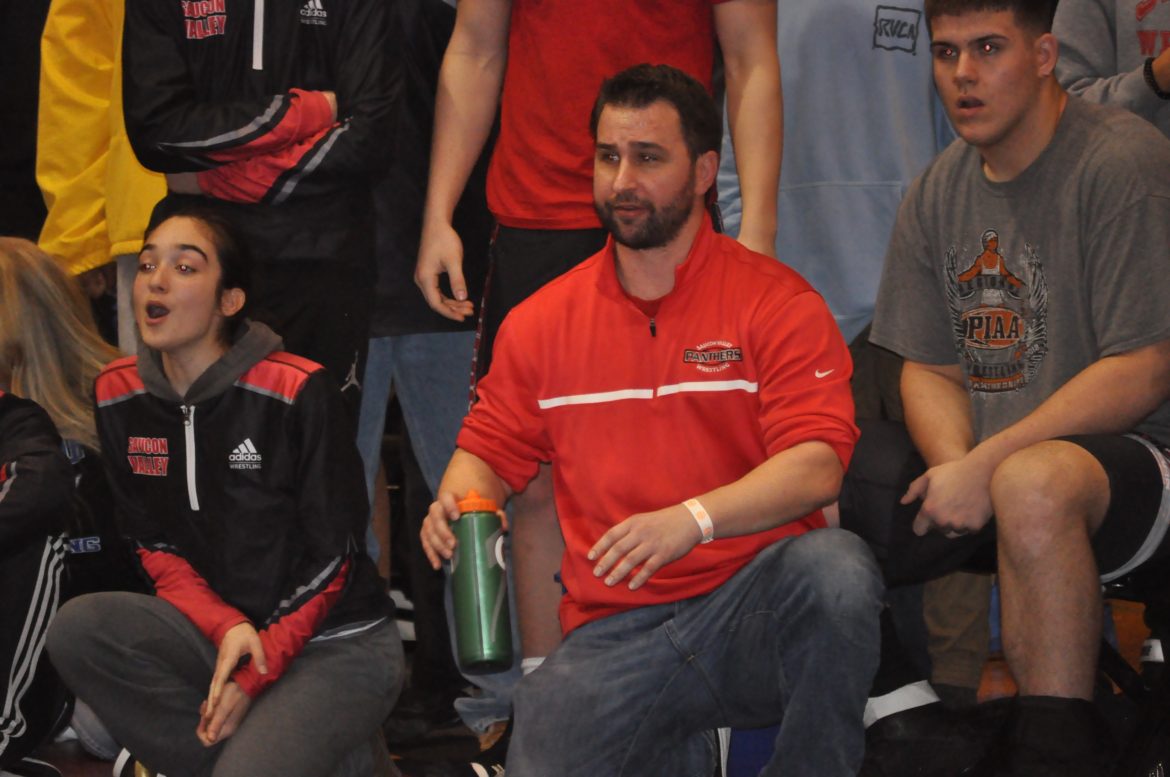 Up Next: Hershey, Here we come!  On Thursday, Saucon Valley will open the 2020 PIAA Team Wrestling Championships at the Giant Center against Line Mountain at 4 p.m.  The Panthers are four wins away from a state title! 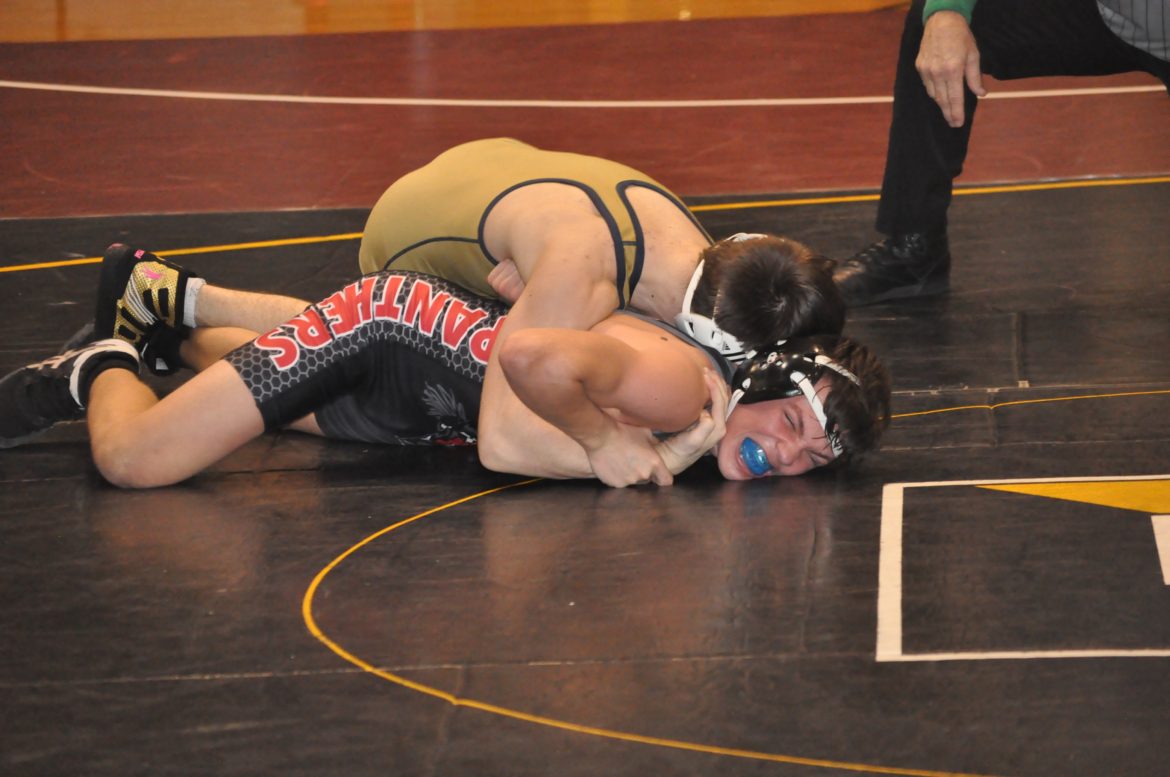 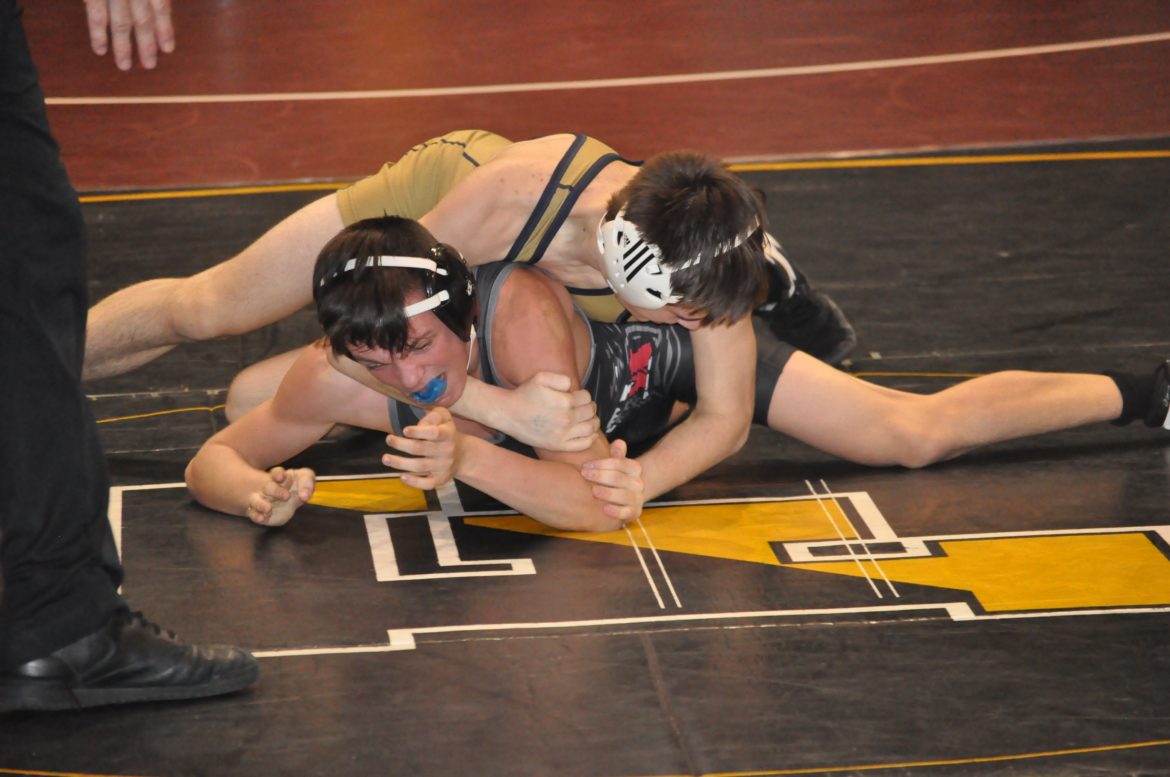 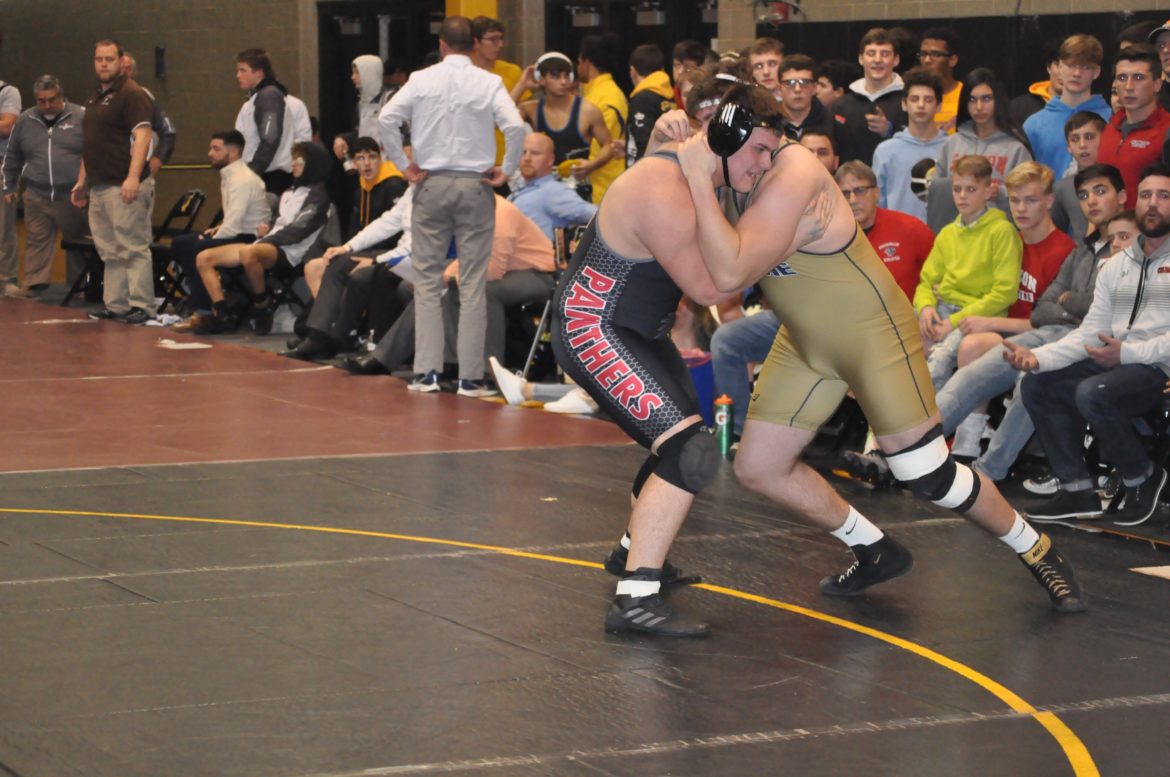 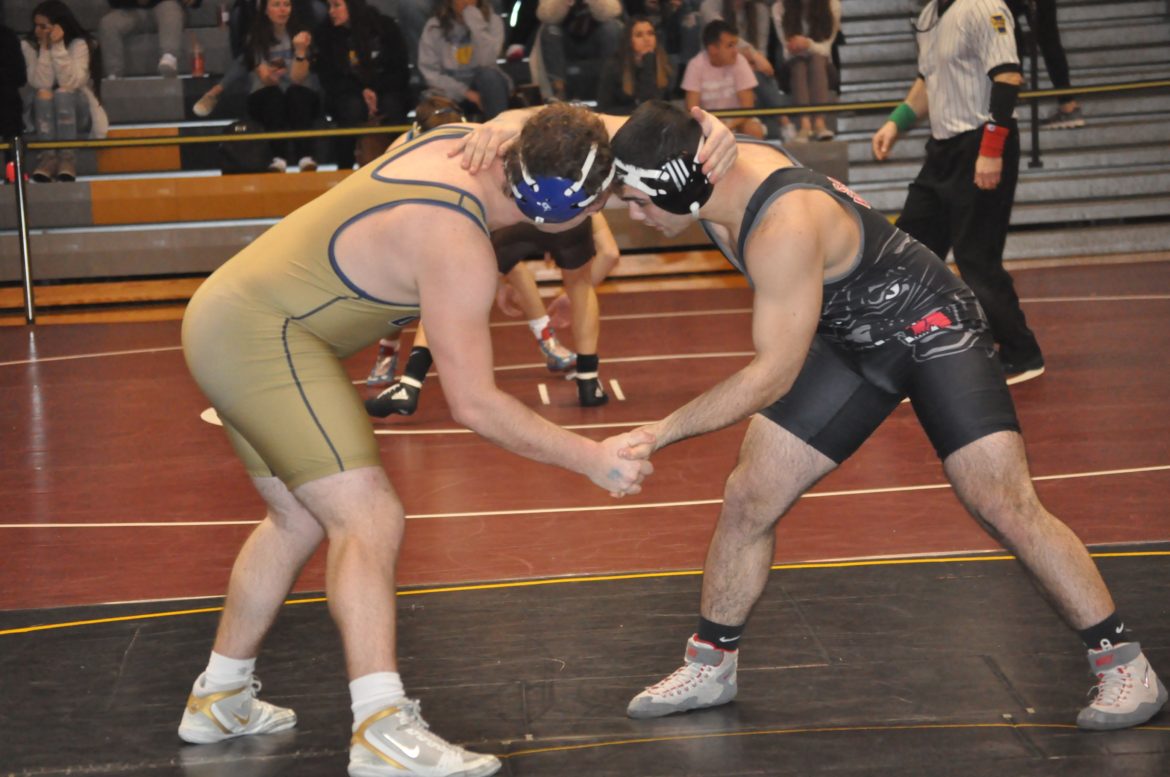 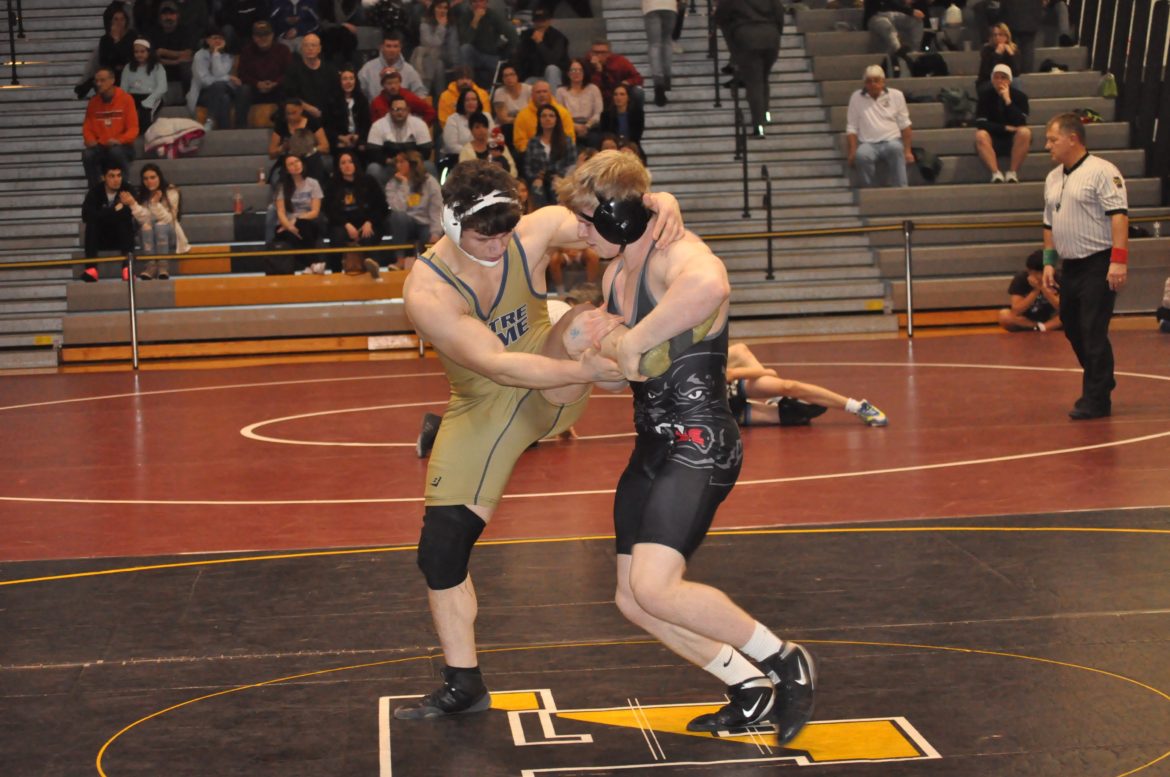 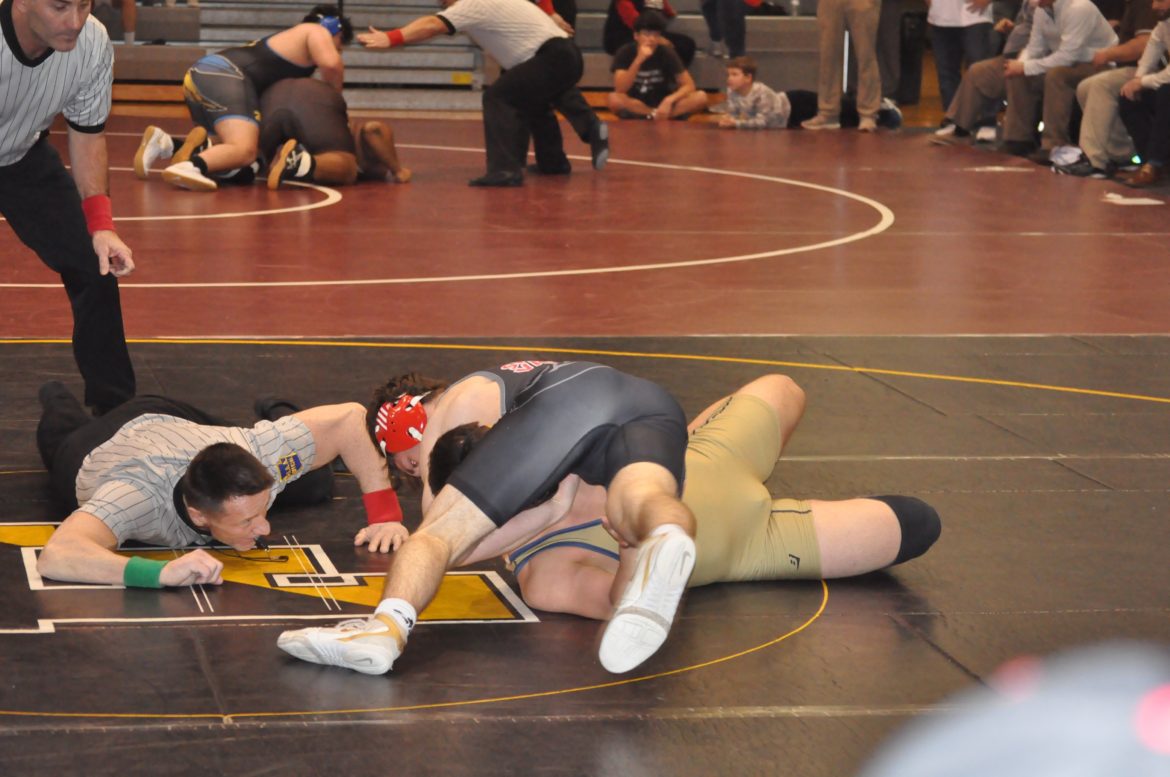 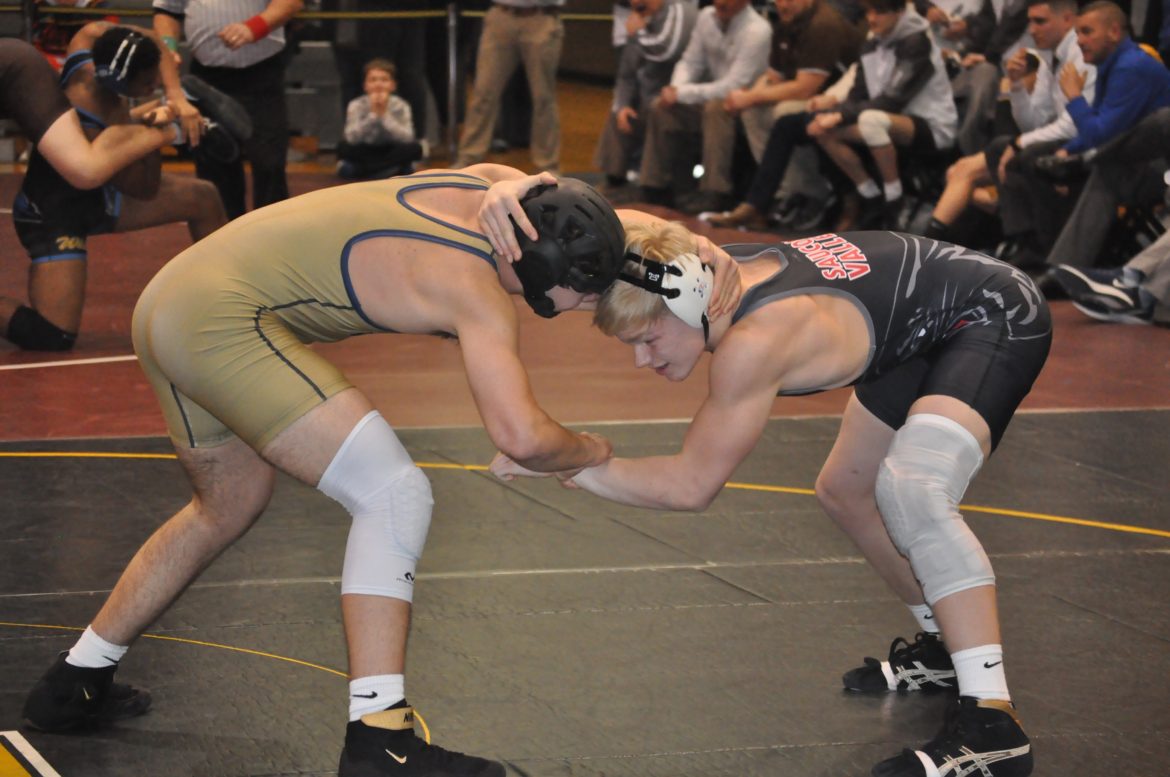 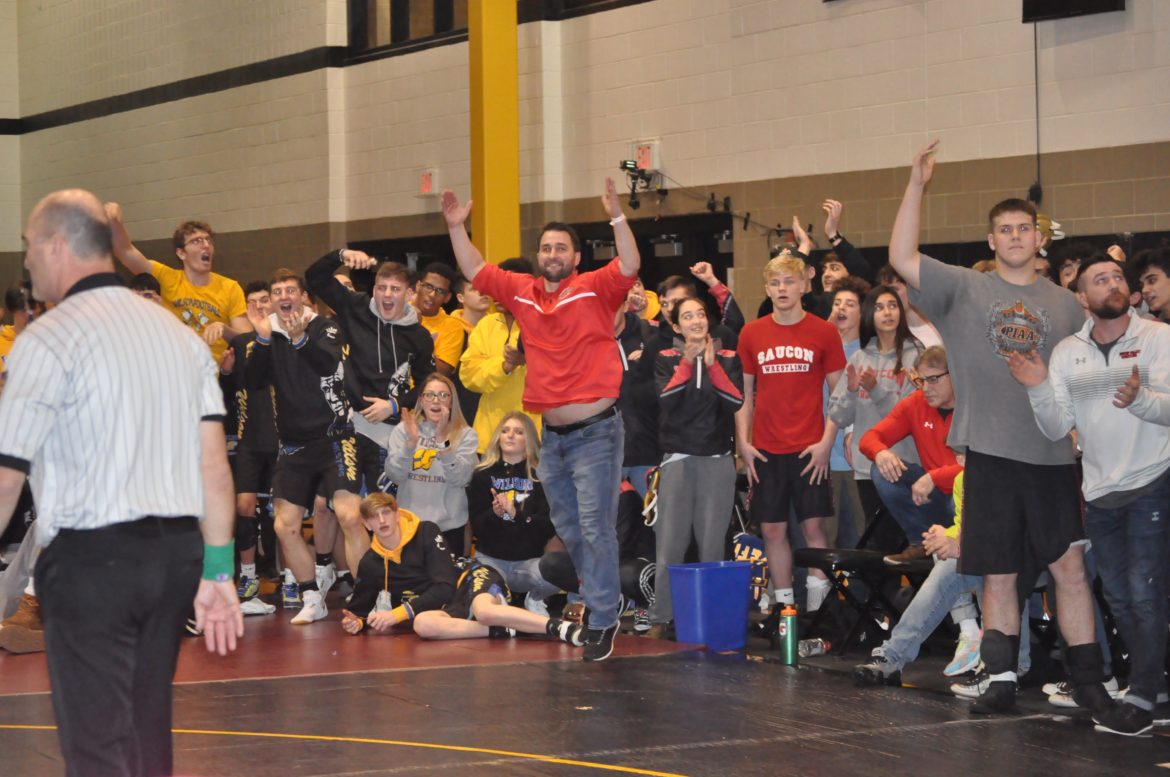 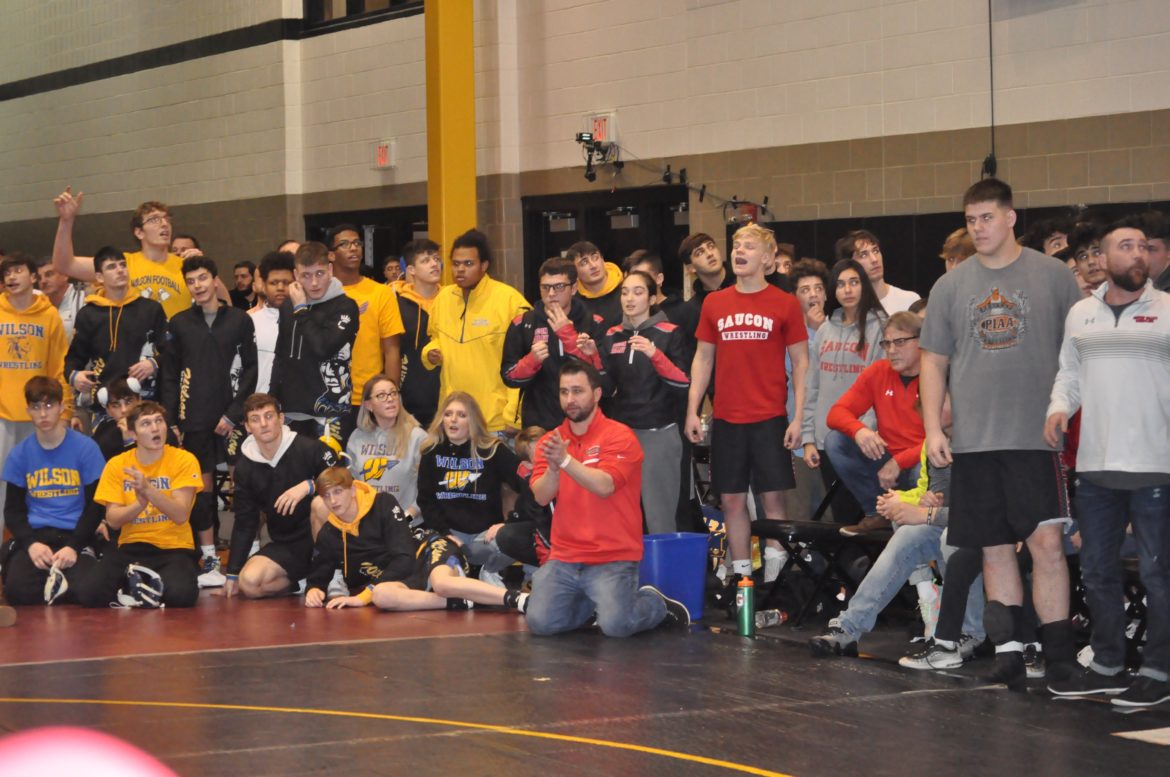 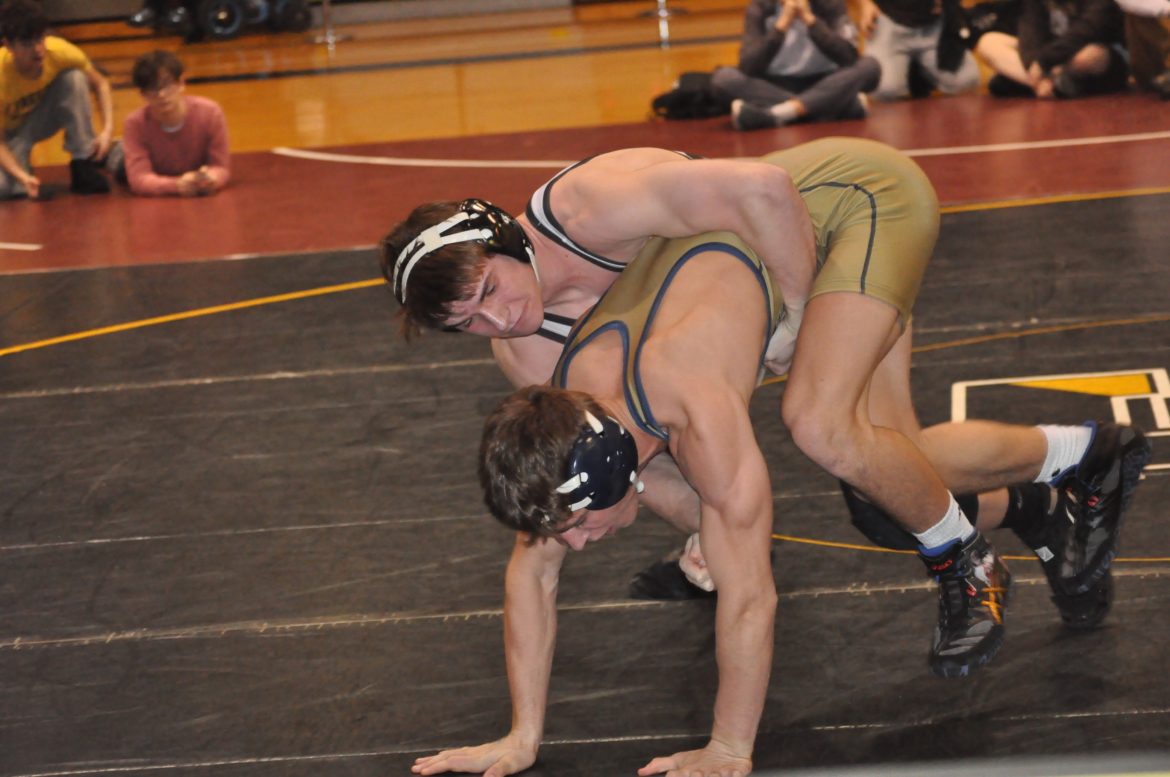 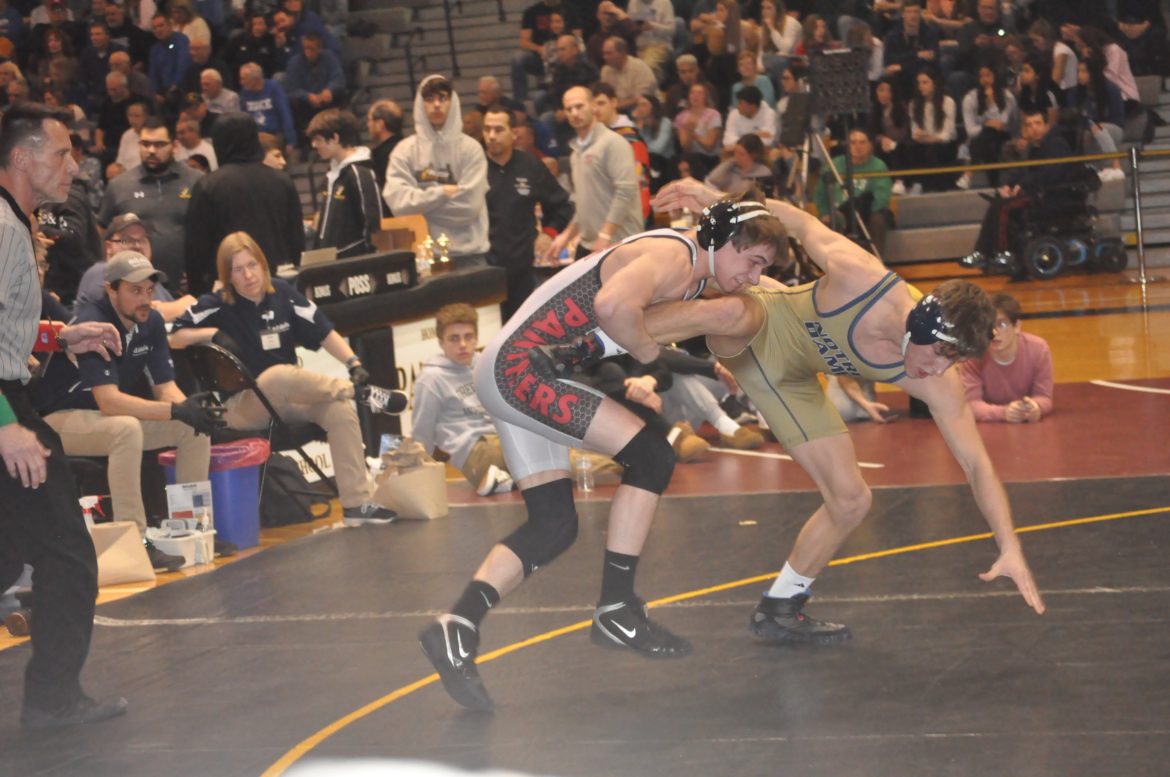 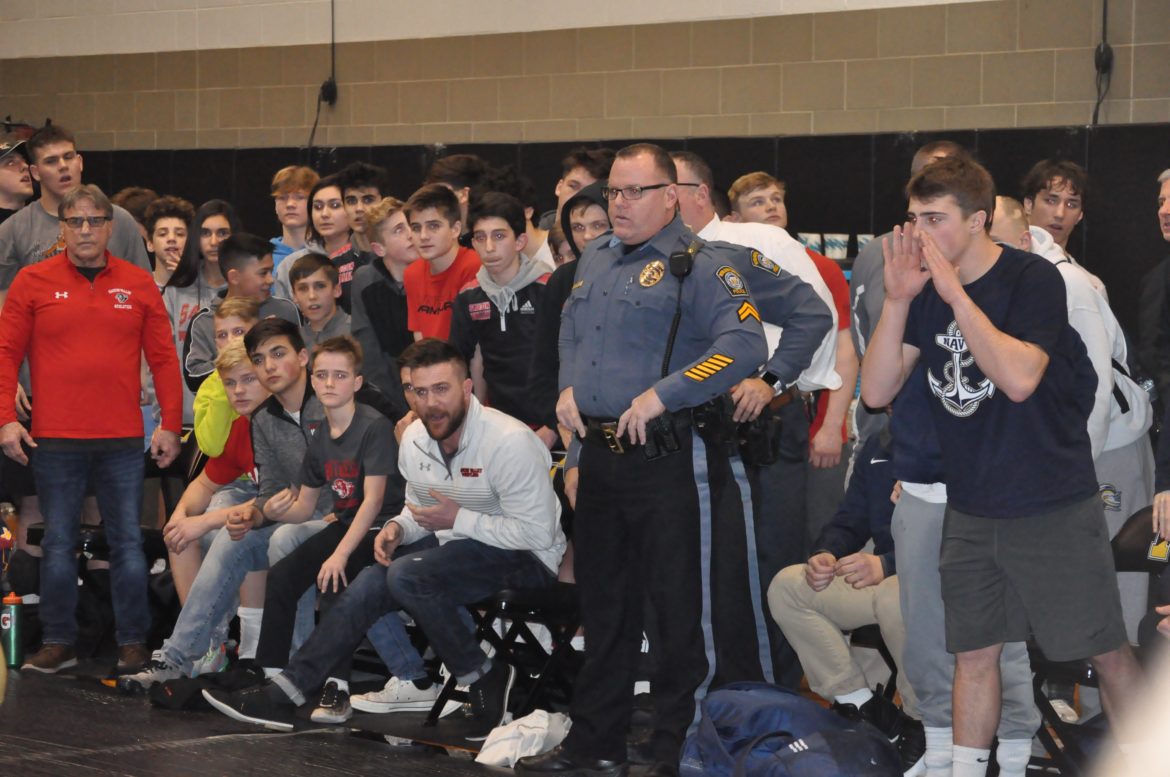 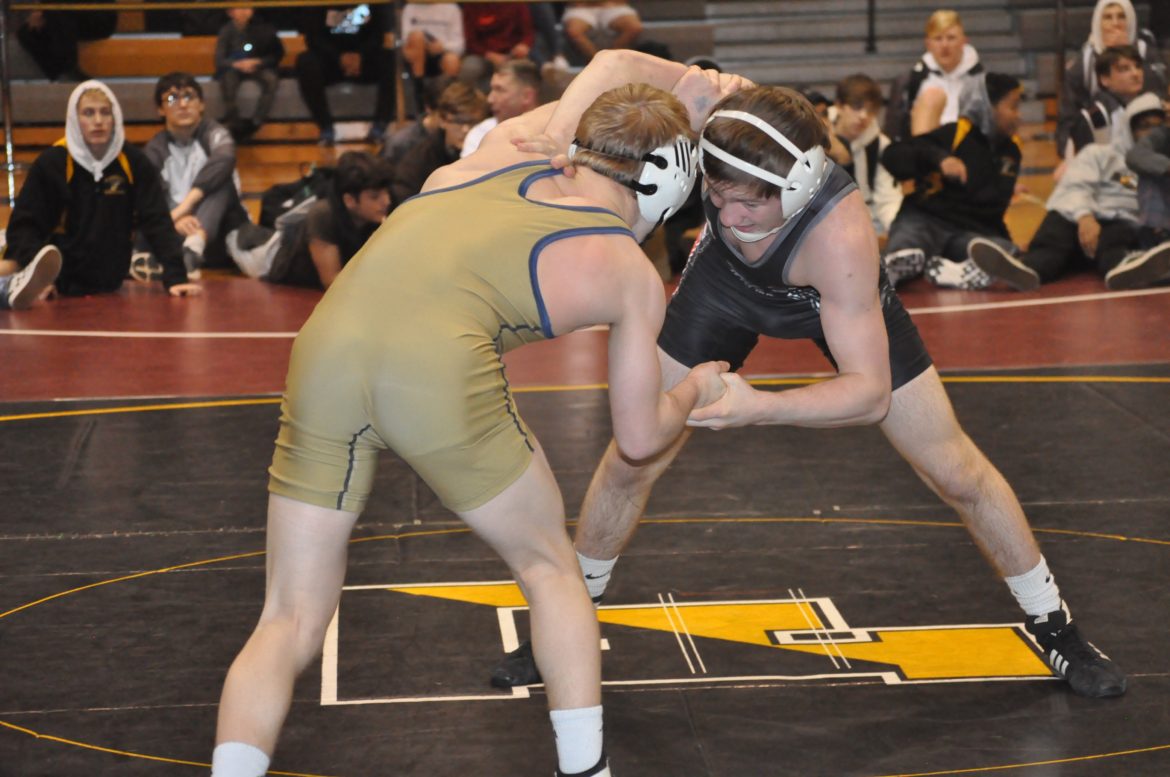 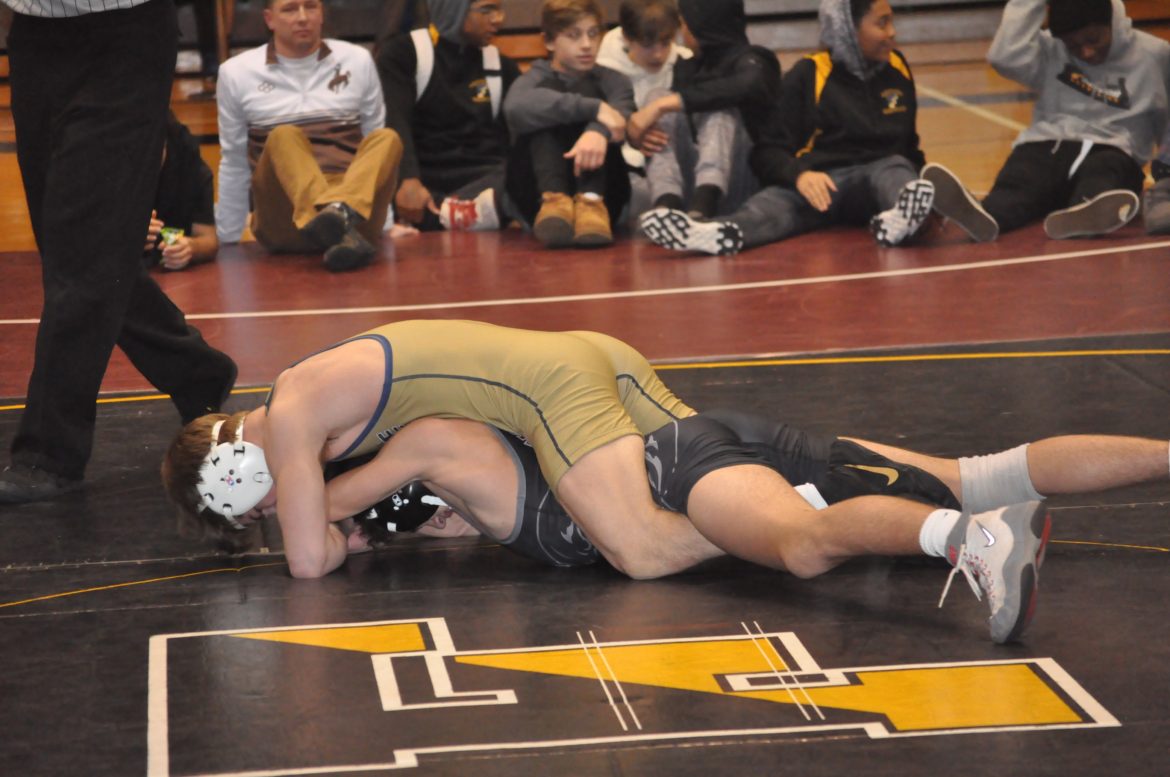 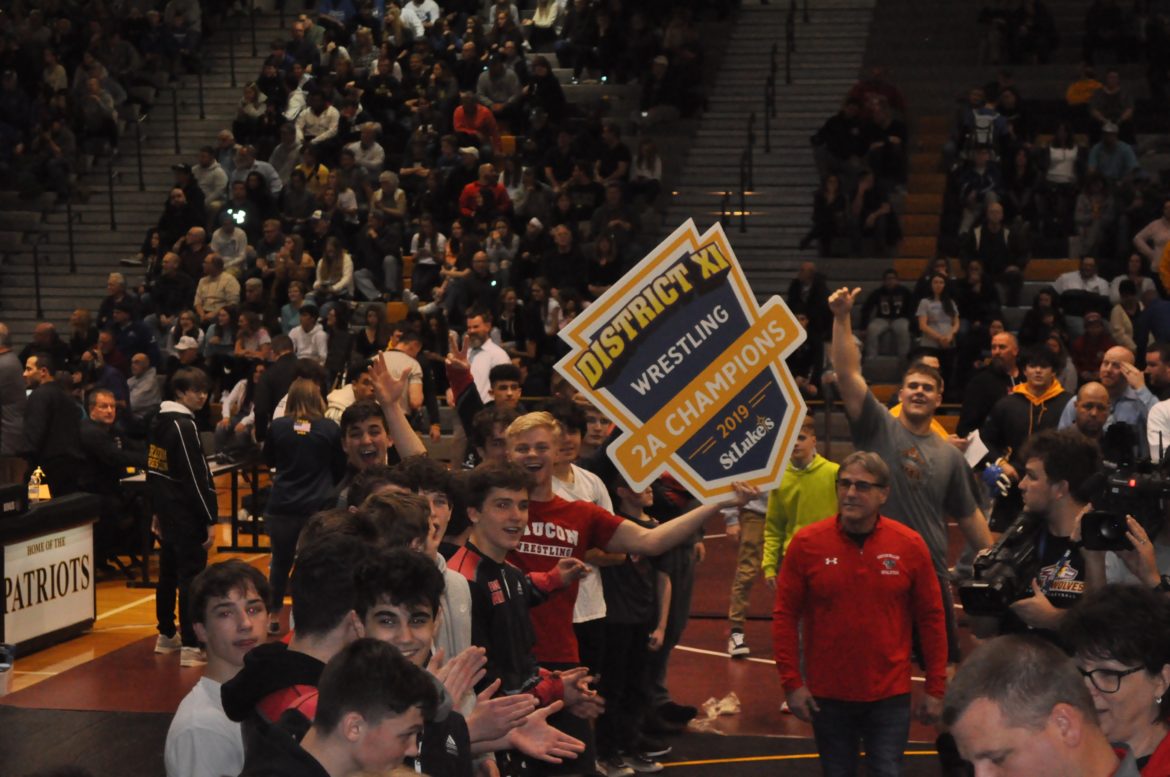 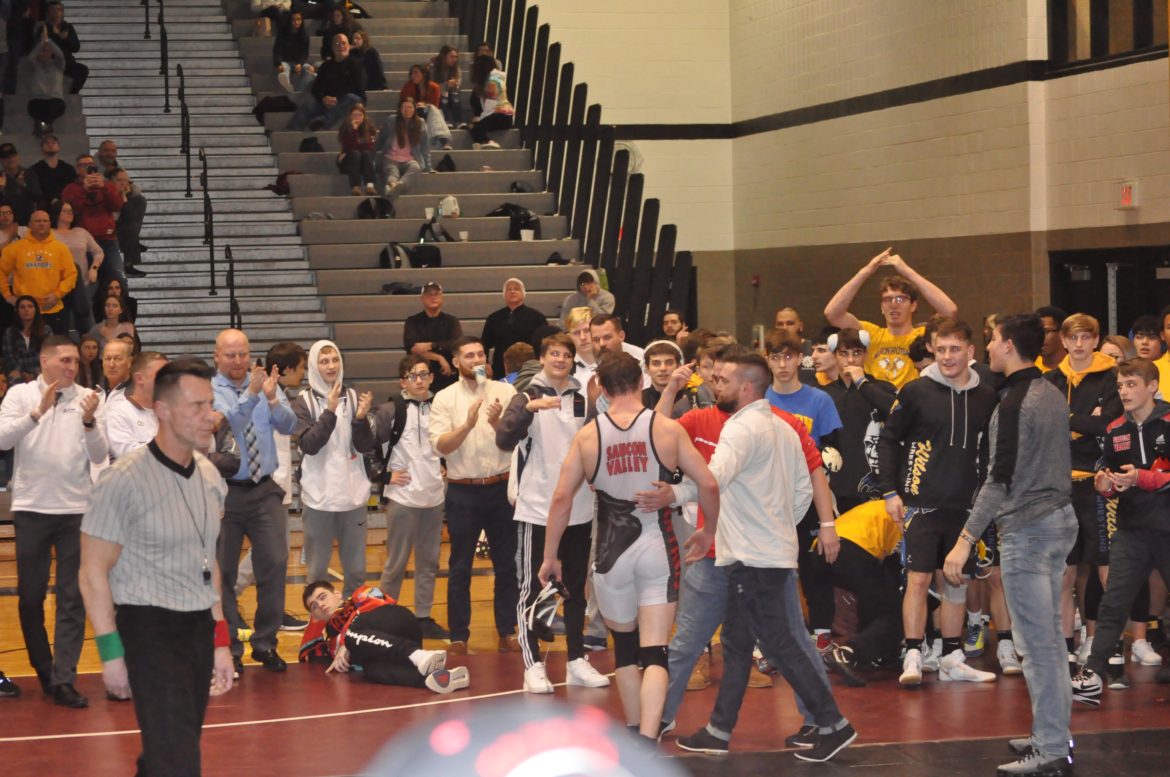 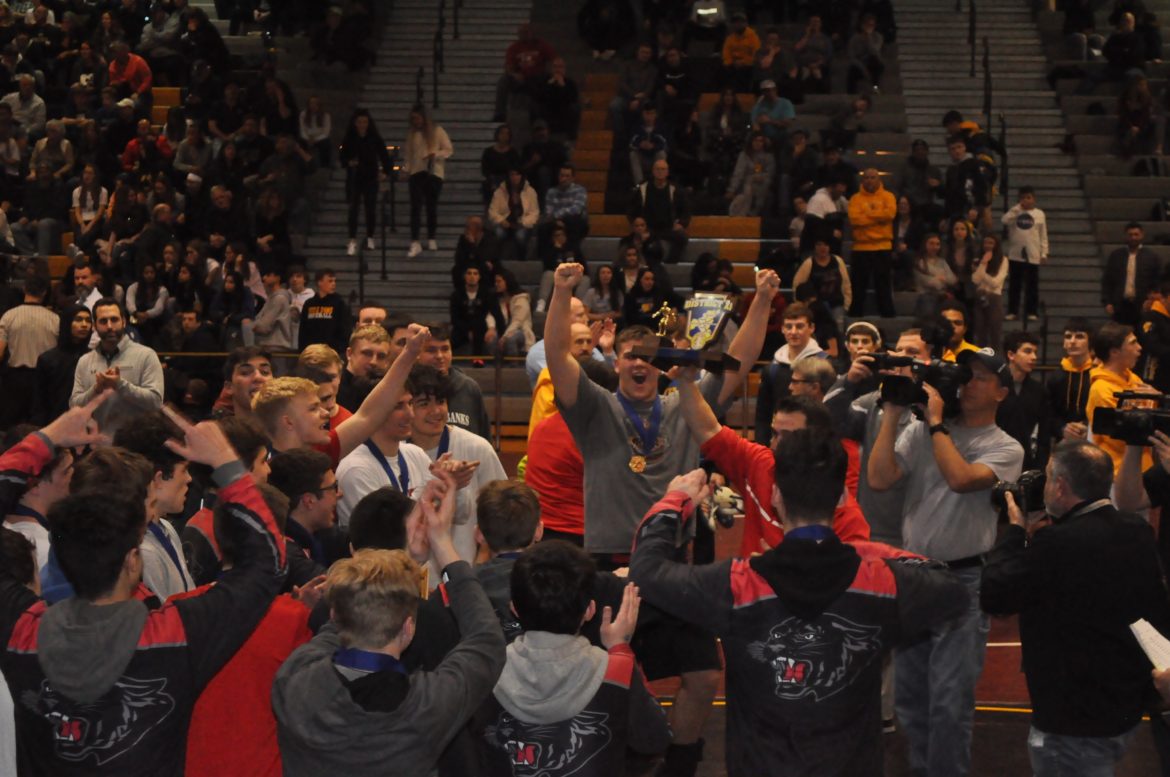 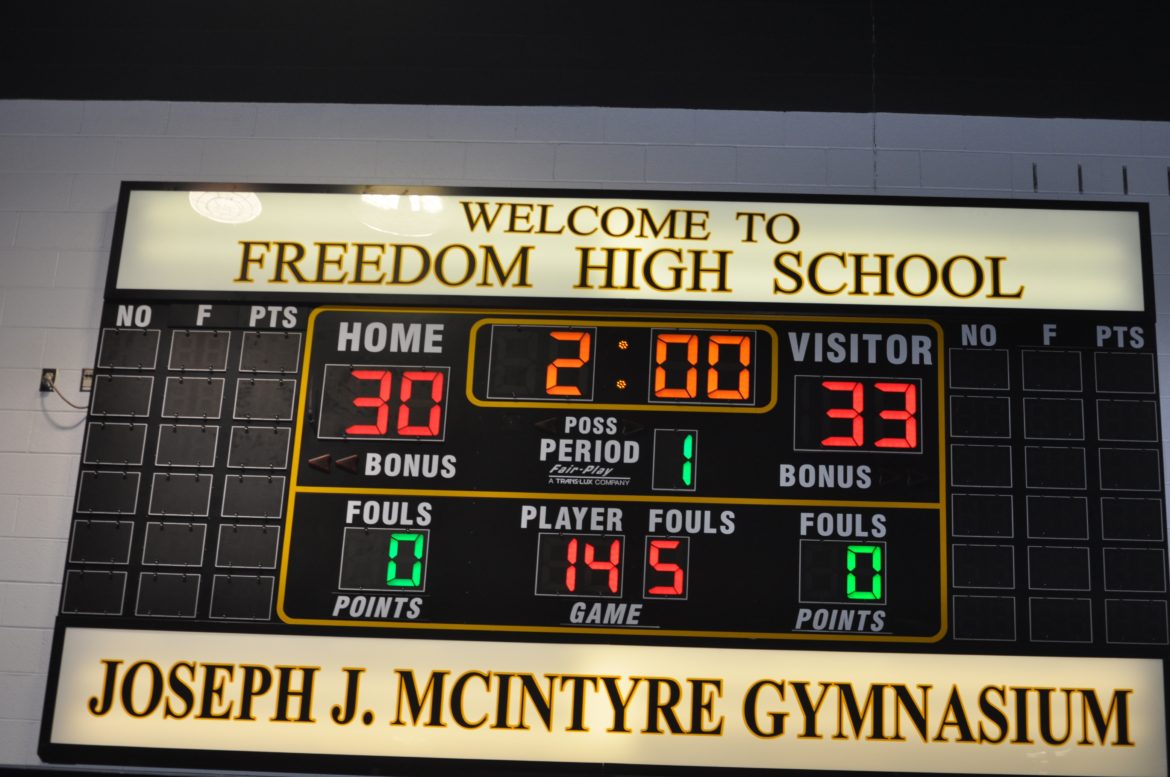