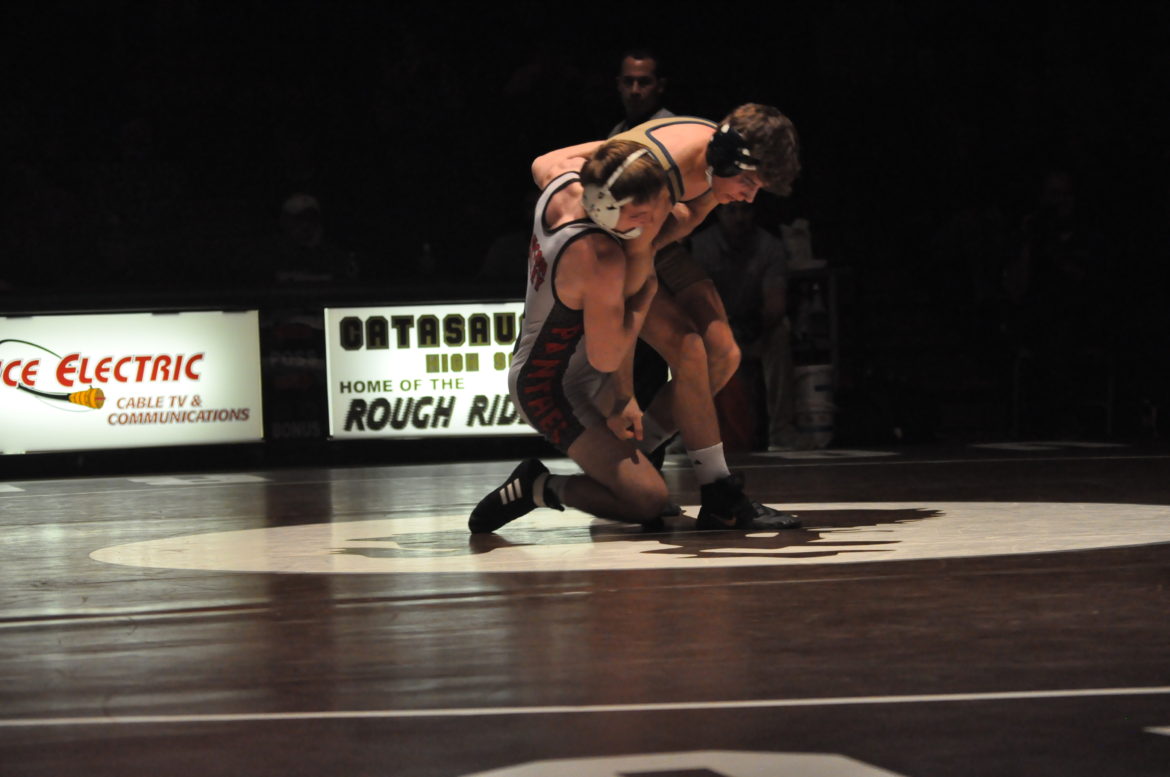 Monday night at Catasauqua High School the Saucon Valley Panthers competed in the Colonial League wrestling championships.  The #2 seeded Panthers took on #3 Wilson while #1 Notre Dame faced #4 Northwestern Lehigh in the semifinals with the winners to square off in the 2019-2020 championship. 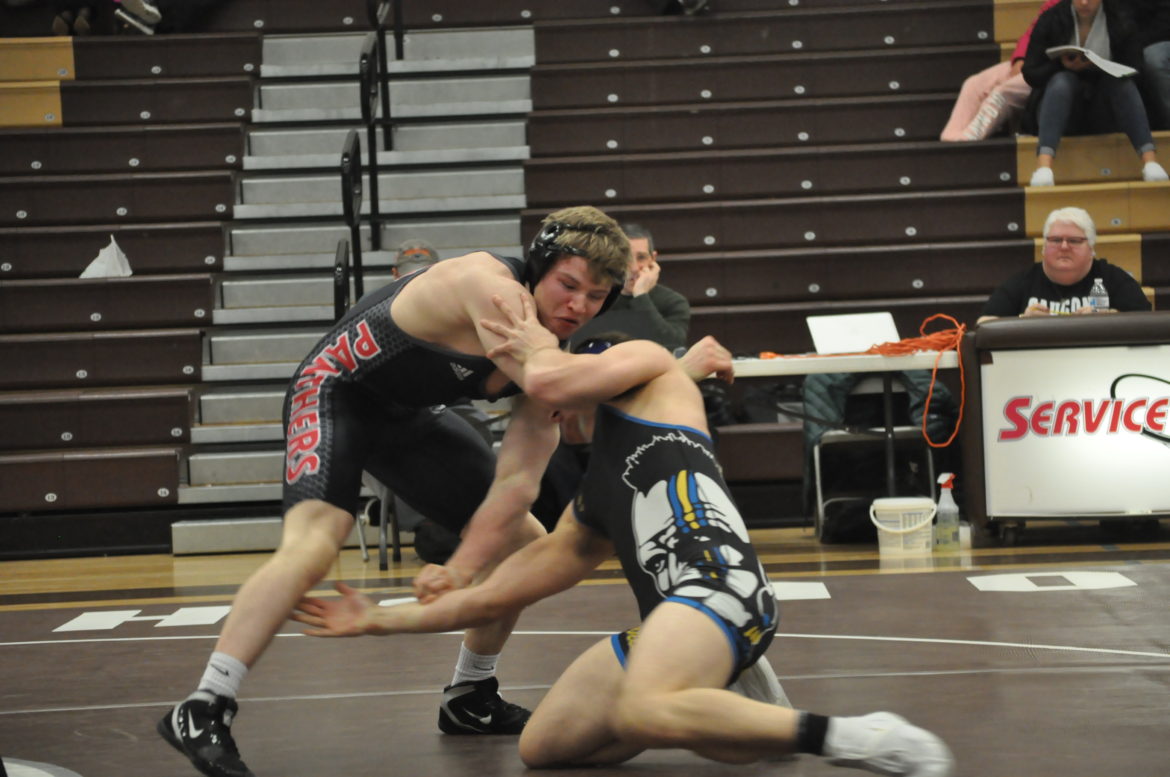 Dane Csencsits got the best of Wilson’s Alec Snyder to lead the Panthers to victory in the 2020 Colonial League championship semifinal.

The semifinals played out pretty much as most wrestling fans would have expected, but it seems as if it may have come at a steep cost to the already banged-up Panthers.  With Saucon Valley leading the team score 15-5 after four bouts, senior Thomas Spirk, who is a Bucknell University commit, took the mat against Wilson senior Ashtyn Berberena and quickly jumped out to a 5-0 lead.  However, near the end of the first period Spirk’s knee was twisted underneath him and he was forced to injury-default.  Spirk defeated Berberena by an 11-5 score a little over a week ago in Saucon’s 46-21 win over Wilson, however this misfortune led to six points being awarded to the Warriors.  The listless Panthers were able to hold off the tenacious Warriors for a 37-27 victory and earned a rematch against the Notre Dame Crusaders in the championship final.  Spirk, however, would have to join Chris Arciuolo (132), Dante Mahaffey (160) and Ty Csensits (170) on the Saucon Valley bench to watch the Panthers go after their 8th consecutive Colonial League championship. 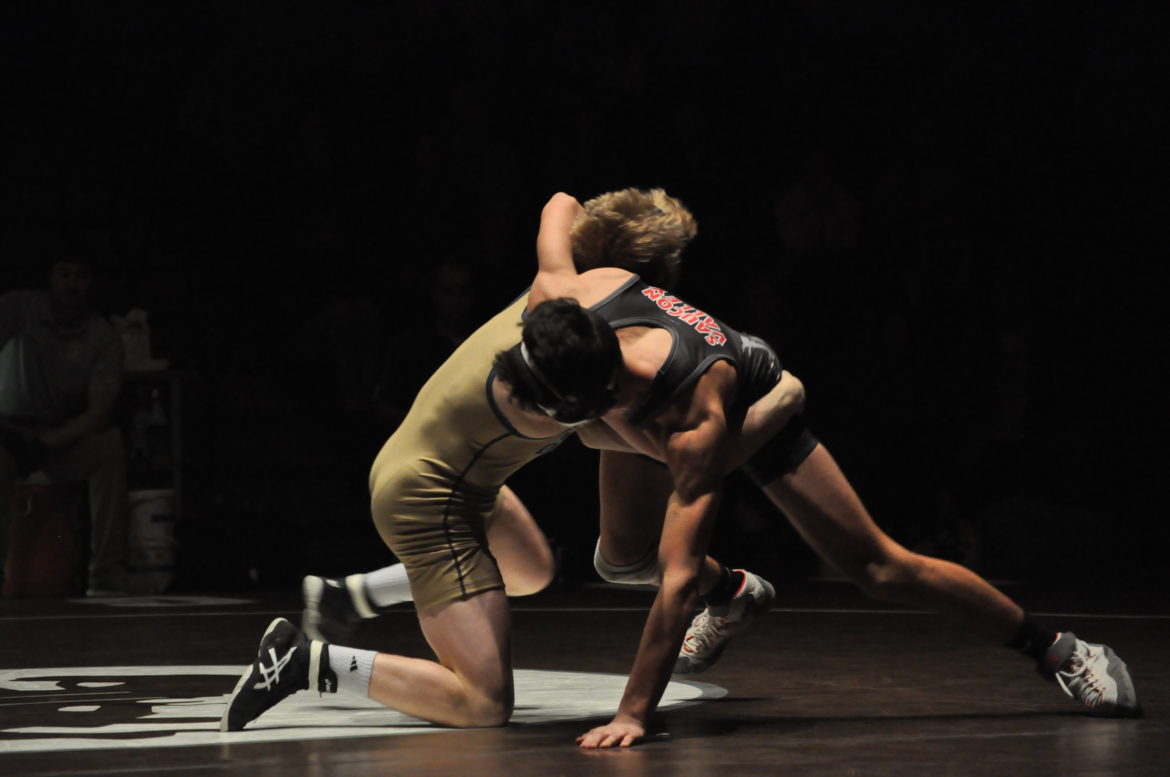 With the final starting at the 126 weigh class, Notre Dame jumped out to a quick 18-0 lead.  Brandon Chletsos (126), Josh Bauman (132) and Ryan Crookham all pinned to put the Panthers in an early hole.

Saucon Valley valiantly battled back to win four of the next five bouts.  Freshmen Jake Jones (145) and Tyler Pfizenmayer (152) both earned hard-fought decisions while seniors Matt Arciuolo (170) and Dane Csencsits (182) each pinned their Notre Dame opponent.  Arciuolo packed his Crusader in less than a minute and Csencsits built a 17-5 advantage before recording his third-period fall.  Notre Dame senior Andrew Cerniglia (160) broke up the Panther party when he recorded a fall against promising Saucon Valley freshman, Liam Scrivanich.  Cerniglia, who finished fourth at the PIAA state championships as a freshman while wrestling for Nazareth, transferred to Notre Dame following his sophomore year.  Cerniglia who is a Naval Academy commit did reach the top of the PIAA podium last season and his current efforts kept the Crusaders in front, 24-18. 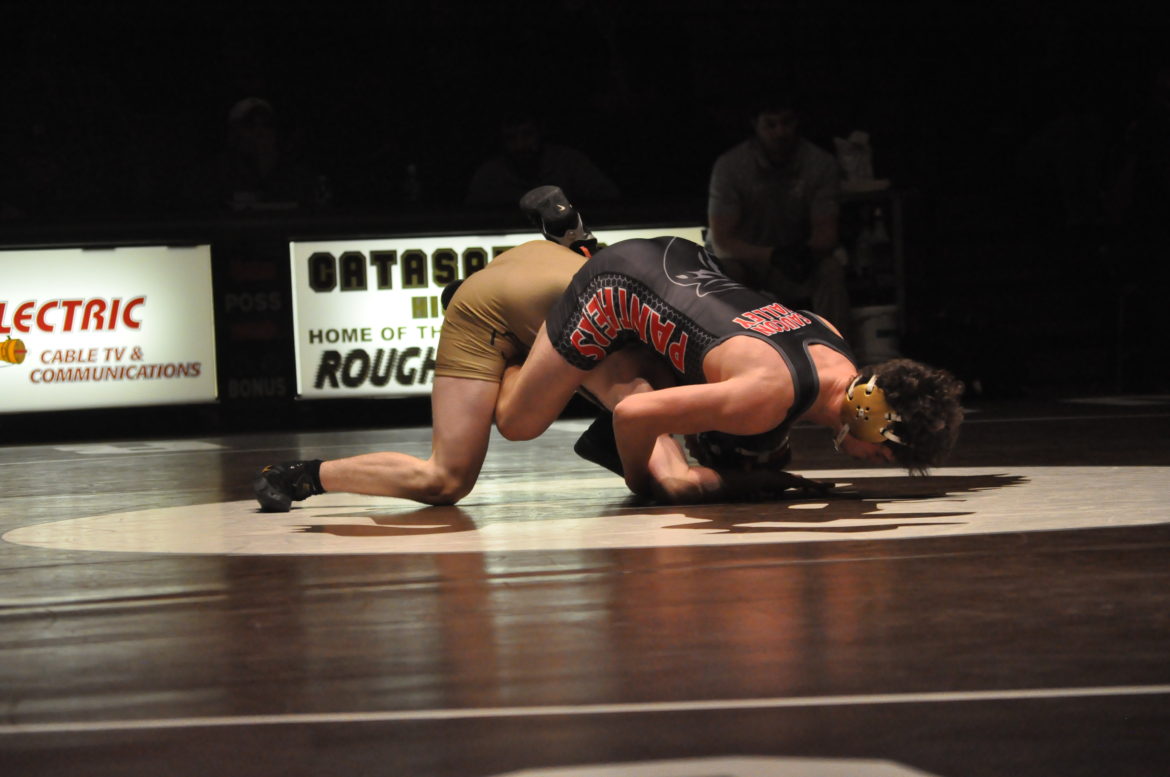 Shirk and staff then made the decision to forfeit at 195 and bump Braydyn Lugardo up to 220 and it paid off.  Lugardo overcame a scoreless opening period to build a 6-0 lead in the second.  The Panther senior held on for a gutsy 7-1 decision as time expired.

Saucon senior Nick Warnke put on the headgear next and followed Lugardo’s decision with a second period pin.  A pumped-up Warnke helped the Panthers claw their way out of the hole and back to striking distance.  With three bouts to go,  Notre Dame held a slim 30-27 advantage. 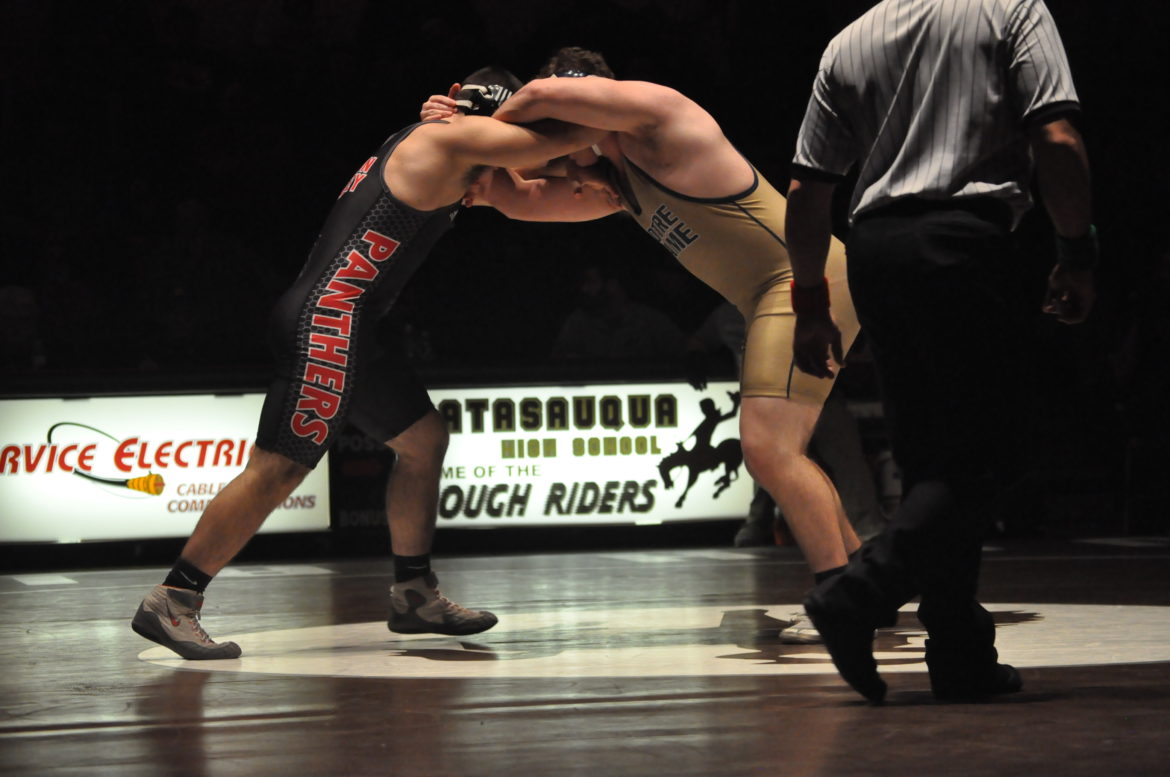 Saucon Valley’s Braydyn Lugardo did more than hold his own in Monday night’s 220 pound bout.

And then it was….”The bout that caused controversy around the Valley.”  Well within PIAA rules, Saucon Valley opted to present junior, Aaliyana Mateo at 106.  Mateo, who happens to be a female student-athlete, has been with Saucon’s wrestling program since sign-ups way back in the off-season.   To anyone remotely familiar with the local or national wrestling landscape, it should be no surprise to see a female participating in the sport of wrestling.  ESPN reported back in April that there are more than 17,000 girls participating in high school wrestling.  Locally, Parkland’s program has numerous females on their roster and also employs a more than qualified female assistant coach in Kasey Kruczek.  Saucon’s Mateo competed at Quakertown’s preseason tournament on December 9 without any fanfare and on Monday night courageously took the mat against the Crusaders.  Nonetheless, due to an archaic and discriminatory policy mandated by the Allentown Diocese that prevents boys from competing with girls, Notre Dame chose to forfeit against Mateo giving the Panthers a 33-30 lead.  Many of Notre Dame’s faithful including some their coaching staff, took obvious exception to Saucon’s decision to field Mateo.  It is unclear why the Crusaders would overtly draw attention to Saucon’s legal strategy, especially when Notre Dame is currently under scrutiny regarding a few questionable (and by many standards, unfair) tactics of its own. 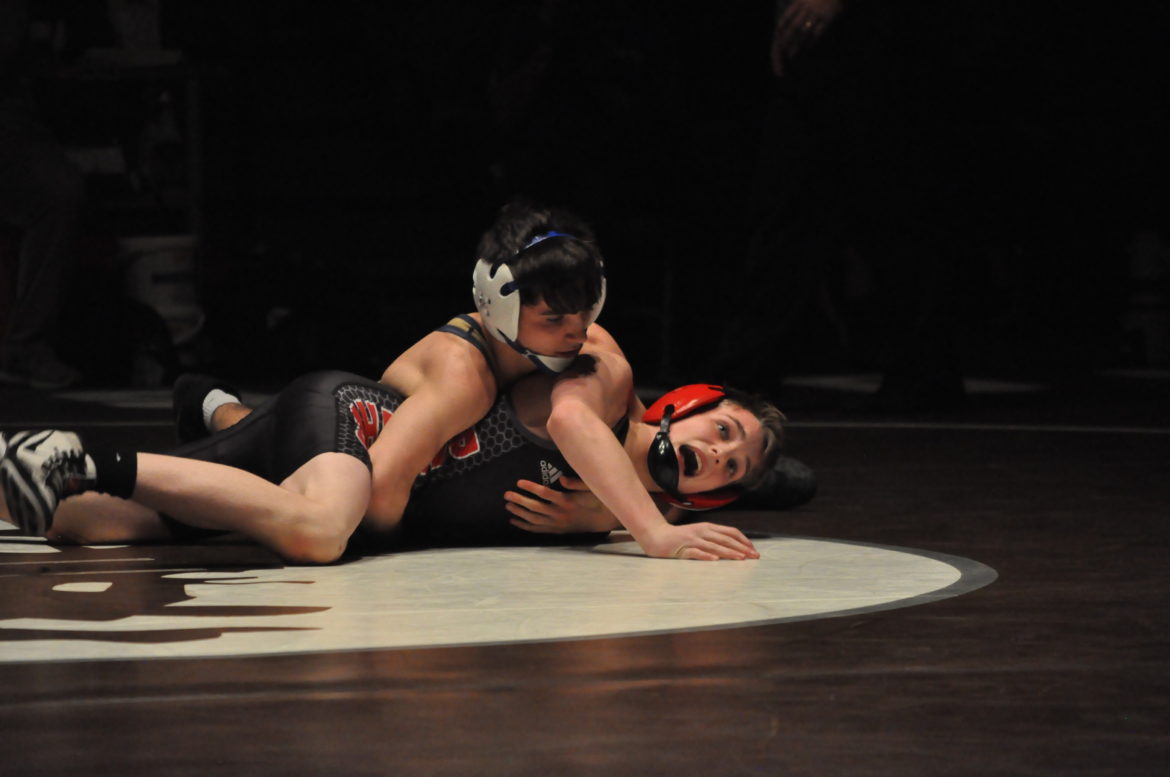 In the decisive bout of the night, Notre Dame’s Bryson Vaughan executed a takedown and near-fall to build a 5-0 lead against Saucon Valley’s Travis Riefenstahl.  In the second period Riefenstahl had Vaughan on his back and it looked like the Panthers would win their 8th straight Colonial League title.  But, Vaughan fought off the attack and ultimately reversed Riefenstahl for a pin.  Vaughan’s victory gave Notre Dame a 41-33 win and the first Colonial League championship in Notre Dame’s history. 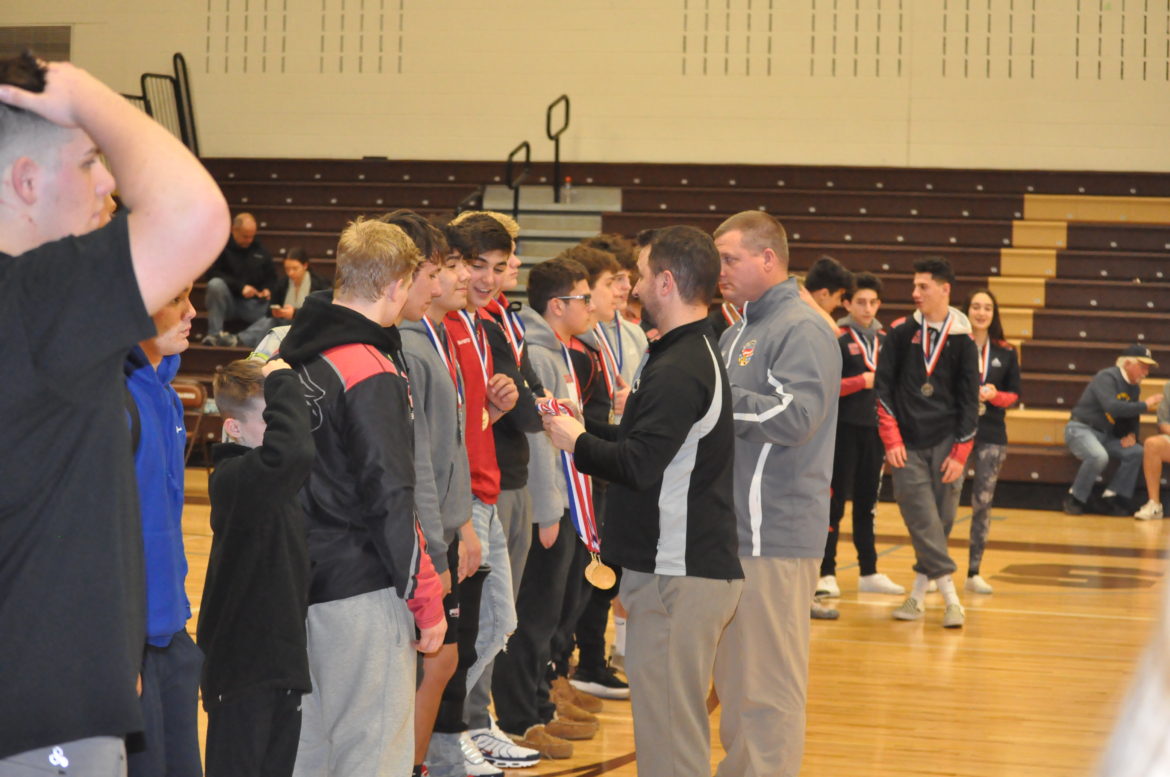 For the first time in eight years, Coach Shirk and the Saucon Valley Panthers had to settle for the silver medal in the 2019-2020 Colonial League championships.

The Crusaders, who were runner-ups to the Panthers last season, feature an all-star lineup of outstanding wrestlers from many corners of the Lehigh Valley and beyond.  This manufactured Crusader program has achieved their first break-through moment by snapping Saucon’s reign of dominance over the Colonial League.  The Panthers monumental streak of seven consecutive Colonial League titles has come to an end.

Up Next:  The postseason begins!  Saucon Valley will take the first step in defending their four-year run on the District XI 2A team title.  The Panthers will face the Pen Argyl-Northwestern Lehigh winner on Thursday night.  Saucon Valley will again take the mat at Liberty High School.  Panther wrestling action is scheduled for a 7:30 p.m. start.