All Pennsylvania counties are now expected to be in Gov. Tom Wolf’s reopening plan’s yellow phase by June 5; an indication of how much progress has been made in the fight against COVID-19. However, a comparison of state health department data from local red counties–and one already in the yellow zone–demonstrates that there was actually a percentage increase in the number of new COVID-19 cases in a few of them last week.

Saucon Source compared the total number of new cases across five counties–Bucks, Northampton, Lehigh, Carbon and Monroe–for the weeks ending May 15 and May 22.

The week-ending case totals illustrate that while Lehigh County saw a modest decrease in its week-over-week new case numbers and Bucks County saw a more substantial decrease, three counties–Northampton, Monroe and Carbon–all saw modest increases in the percentage of new cases they confirmed.

*Note: Percentages are approximate to the nearest tenth of a percentage point. The case totals are sourced from publicly available current and archival data published on the Pennsylvania Department of Health website.

One reason the above data is a bit surprising is that it is indicative of an increase in new cases at a time when restrictions on gatherings are being loosened or are about to loosen. The data, however, could also be a result of additional testing that is taking place. 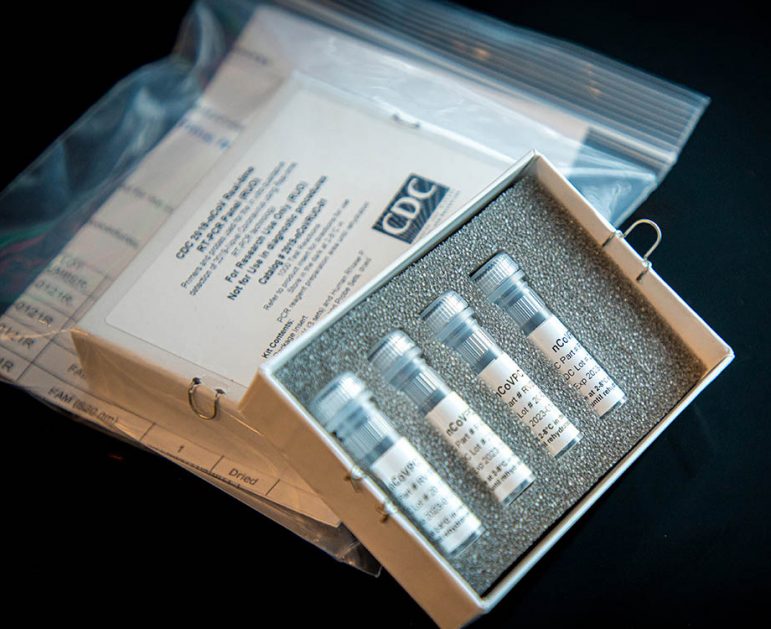 A test kit for the 2019 novel coronavirus, also known as COVID-19. How many residents are being tested for the disease, who is being tested and why they are being tested are ongoing subjects of discussion at daily news briefings about the pandemic provided by the Pennsylvania Department of Health and the governor’s office.

The primary metric the state has said it would use to determine when counties can move from red to yellow is one that measures the number of new cases over a two-week period against the total population of a county.

In Wolf’s Process to Reopen Pennsylvania–part of his broader Plan for Pennsylvania–the target statistical goal for beginning reopening within a county initially meant having fewer than 50 new confirmed cases per 100,000 people in the previous 14 days.

Thus, Northampton County–with a population of just over 300,000–would need to report roughly 150 cases (or fewer) in a 14-day period to satisfy the goal, which is only one of the criteria the state said it is using to determine when reopening can begin.

Between May 8 and May 22, Northampton County reported approximately 450 new cases of coronavirus, or roughly three times as many as it should have to advance to the yellow according to the original formula.

On Friday, when it was announced that Northampton and nine other red counties are expected to graduate to the yellow phase by June 5, state officials changed the rules a bit.

In the updated Plan to Reopen Pennsylvania, the governor’s office announced that because of the state “dramatically increasing its testing capacity, as of May 22, the fewer-than-50 new cases per 100,000 population measure will be considered, but it will be reviewed in the context of various other factors that are indicative of risk.”

It is true that Pennsylvania is now testing significantly more people than it did previously, with approximately 400,000 Pennsylvanians out of a total population of nearly 13 million so far having been tested.

Pennsylvania still has the second lowest ratio of tests performed among the 10 states with the most confirmed coronavirus cases, however. According to Worldometer, only Texas has performed fewer tests, and the virus is much more widespread in Pennsylvania.

Northampton County which operates its own testing site for residents only announced that it had its busiest day for testing Friday, and that testing would contine at the makeshift facility in Wilson until at least June 5.

“The Northampton County EMS Coronavirus/Covid-19 testing collaboration with Easton Hospital has conducted a total of 888 tests as of May 22,” a post on the county’s Facebook page indicated. “Ninety-six tests were conducted today (which was) by far the largest single day of testing. The daily average of completed tests is 68.31.”