Is it the result of increased testing? Is it because restrictions on gatherings have been loosened and more businesses have opened under guidance from state health authorities? Is it because people are bringing the virus home with them from vacations?

Nobody seems to know the answer why, but the fact is that new COVID-19 case counts continue to creep up in parts of Pennsylvania; a trend that is also occurring nationally, prompting concern that the coronavirus pandemic’s so-called “second wave” is about to strike. Evidence of this may be found in the fact that Allegheny County officials ordered bars to close and liquor service in restaurants to cease as of Tuesday, after the county witnessed a large spike in new cases over the past week. Statewide, declining case counts that were a decided trend earlier this month have been replaced by a very slow uptick in new cases, as reported daily by the Pennsylvania Department of Health.

Pennsylvania has not seen such a spike, however many of the state’s most populous counties–including Lehigh and Northampton–only moved to the less restrictive ‘green’ phase of Gov. Tom Wolf’s reopening plan on Friday. As a result, inside dining areas and bars in the southeastern part of the state have only been open for several days. Inside and outside, in the Lehigh Valley and other newly-green counties gatherings of up to 250 people are now permitted, although individuals are encouraged to wear face masks if they cannot maintain a safe social distance of six feet from other individuals. By contrast, Allegheny and other western Pennsylvania counties have been designated green for nearly a month, and that is where the biggest spikes in new cases are now being seen.

In a news release Sunday, Wolf voiced support for the actions of Allegheny County officials in response to the increased caseload.

“I commend Allegheny County Executive Rich Fitzgerald and Health Department Director Dr. Debra Bogen for the decision to shut down bars and restaurants for on-premises alcohol sales in Allegheny County effective June 30,” Wolf said. “This was the right move to work to stop the recent spike of COVID-19 cases in its tracks and to remind all residents and businesses that the best defense we have in preventing the spread of COVID-19 and keeping Pennsylvanians safe is to continue to follow the mask-wearing requirement, practice social distancing and follow safety guidelines even and especially during the green phase of reopening.”

“We cannot become complacent in practicing the measures we know can protect everyone from the spread of this very contagious virus,” he added, but made no request that officials in other counties experiencing significant increases in new cases follow Allegheny County’s lead.

Wolf and Secretary of Health Dr. Rachel Levine have continued to request compliance by all Pennsylvania residents with Levine’s  April 15 order that requires employees and customers in businesses to wear face masks, unless they are unable to do so for medical reasons.

No proof is required if an individual asserts that they have a medical condition, and whether to ask someone why they’re not wearing a face mask has been left to the discretion of business owners. Many business owners are reticent to approach customers who are not wearing masks, since there is no state system in place to enforce the order.

In Allegheny County, new cases have increased by approximately 500 percent since June 15.

In Northampton County the new caseload now compared with the new caseload two weeks ago on June 15 is flat, with an average of 11 new cases being reported daily in both cases. New case counts in Bucks County are also essentially flat. 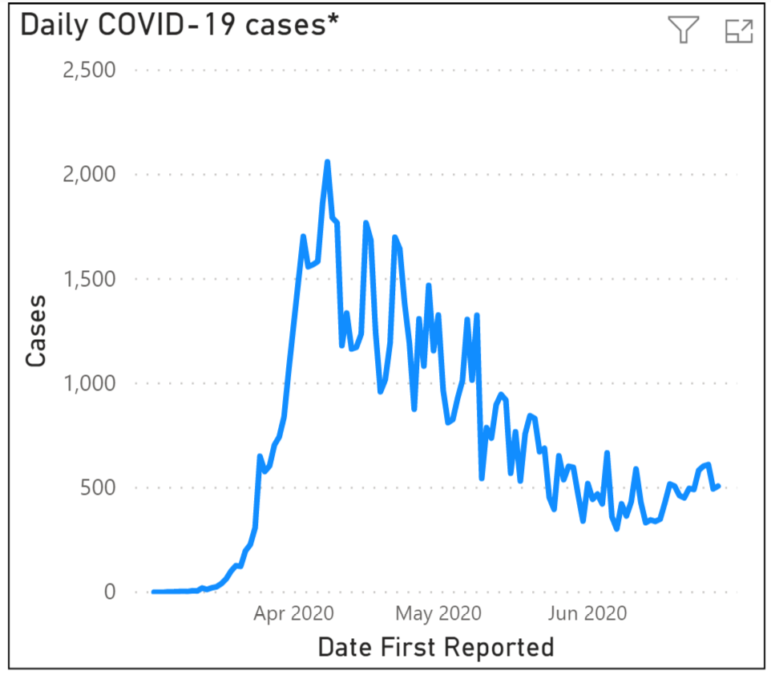 A Pennsylvania Department of Health chart documents the slow uptick in cases the state is now seeing.

According to the tracking site Worldometer, in terms of the number of COVID-19 tests conducted per capita in Pennsylvania, the state ranks 46th out of 50 states. Only Kansas, Colorado, Oregon and Idaho–all of which have had far fewer cases and deaths linked to coronavirus–have conducted fewer tests on a per capita basis.

As of Monday, per the Pennsylvania Department of Health, there have been a total of 85,988 confirmed cases of COVID-19 since the pandemic began, along with 6,614 deaths from the disease to date.