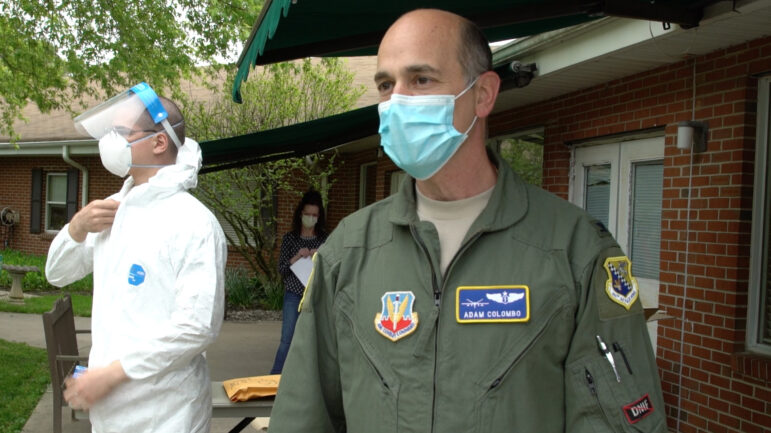 Col. Adam Colombo’s unique medical, military and emergency response backgrounds have equipped him to serve on the front lines of Pennsylvania’s coronavirus outbreak. The Coopersburg resident currently works as the Network Vice Chairman of Emergency Medicine for St. Luke’s University Health Network. In addition to being a physician, Col. Colombo serves the residents of Pennsylvania with the Air National Guard’s 111th Attack Wing Medical Group and as Deputy State Air Surgeon.

Col. Adam Colombo of Coopersburg has spent much of 2020 applying military precision and training towards fighting the spread of COVID-19 as a physician in our community.

Colombo’s professional background is deeply rooted in both military training and medical studies. He has degrees in biology and neuroanatomy from West Virginia University, as well as a degree in osteopathic medicine from the Philadelphia College of Osteopathic Medicine. He is also board certified in emergency medicine.

Colombo has actively served in the Air National Guard unit stationed in Horsham, Montgomery County, since 2005. He is currently a colonel with the 111th Attack Wing Medical Group as well as Deputy State Air Surgeon.

He explained that his interest in both medical and military disciplines dates back to his childhood growing up in lower Bucks County.

“My interest in medicine goes back to when I was in the fifth grade,” Colombo said. “I had a friend and classmate who died from a particular type of brain tumor, and I put it in my little head at the time that I was going to fix that.”

This early experience sparked Colombo’s interest in neuroanatomy. Colombo would get his practical introduction to the world of medicine as a student at Council Rock High School when he decided to volunteer with the Newtown Ambulance Squad.

“As a kid I figured this is the first step I can take into something in medicine,” he said.

Colombo would become an EMT and later a paramedic. In these early roles, he discovered his passion for emergency medicine.

After graduating from the Philadelphia College of Osteopathic Medicine in 2003, Colombo performed his residency at Lehigh Valley Hospital on Cedar Crest Boulevard in Allentown. He began working for the St. Luke’s University Health Network at the conclusion of his residency.

“I’ve been with St. Luke’s since 2007, and in that time I’ve worked as a staff physician at a couple of different campuses,” Colombo said.

He has also been the associate program director for the osteopathic emergency medical residency in Bethlehem as well as director at the Miners Campus in Coaldale and at the Lehighton campus.

Currently, Colombo works as SLUHN’s Vice Chairman of Emergency Medicine; a role in which he oversees all 10 campuses in the health network.

Colombo attributes his early interest in military service to his father, who worked for the Department of Defense as a civilian for 34 years.

“I grew up around naval aviation,” Colombo said. “I always had an admirable outlook on the military.”

“Initially I had interest in joining the military after residency, just so I could get through the hard parts of medical school training,” he said. However, the attacks on Sept. 11, 2001 galvanized Colombo to commission early and begin his military service.

Colombo quickly found a role after joining the Horsham Air Guard 15 years ago.

“When I started there were two flight surgeons working there, and for different reasons both of them left in about six months,” he said. “So, I wound up being the only physician there and the only one to lead the flight medicine program.”

He has officially been the Chief of Air Space Medicine since 2009, however he has essentially been in that role since he arrived in Horsham.

“I had a lot of on-the-job training and trial by fire,” he joked.

As if dual careers in the medical and military worlds weren’t enough, Colombo has been a volunteer firefighter with the Upper Saucon Volunteer Fire Department for 27 years and serves as the tactical physician for the Bethlehem Emergency Response Team, which is a part-time SWAT unit.

“I’m very good at multitasking and being able to stay on the forefront of everything going on in everything that I do,” he explained.

Colombo also attributes his ability to be involved in so many organizations to unwavering support from his wife and his 13-year-old son, Bruno.

“I have really good family support at home,” he said. “Somehow my wife and son understand my life, they love it when I’m around and they understand my priorities when I’m not.”

It is Colombo’s broad and diverse background that has well-equipped him to handle the challenges of the current COVID-19 pandemic. With St. Luke’s, he and his staff frequently undergo training scenarios. He also said working through the Ebola and SARS outbreaks helped prepare the network for some aspects of handling COVID patients.

“During Ebola we didn’t see a lot of patients, but we had cohorted parts of the emergency department, and we had full personal protective equipment (PPE) that we had to don to see those patients,” he said. “So there was a little bit of muscle memory that was created for most of the doctors.”

Colombo summarized one major concern which he said has been the largest challenge while handling the COVID outbreak with St. Luke’s.

“I think the best summary statement for what is challenging about the coronavirus is fear,” he said. “Fear of the unknown, fear of running out of supplies, fear of not having supplies.”

While St. Luke’s initially experienced some shortages of equipment, Colombo mainly attributed that to strain on the supply network, which affected most medical institutions.

“We never had to tell a staff member that they couldn’t have a PPE piece,” he said. “We always had something, but we never knew when the next supply shipment was going to be available.”

St. Luke’s had to innovate when it came to handling shortages. One thing the network did early on during the pandemic was use 3D printers to make their own face masks; a project in which Colombo played a key part.

“I was leading the implementation of that with testing the masks and distributing them, and training personnel on how to use them,” he said.

The team at St. Luke’s have so far designed more than 300 iterations of the 3D printed masks, constantly making changes and improvements to them. Colombo said the newest designs have even received FDA approval.

“St. Luke’s has done a tremendous amount of proactive work to stay ahead of those shortages,” he said.

On the military side of things, Colombo has been involved with two Pennsylvania Emergency Management Agency (PEMA) operations throughout the pandemic.

In receiving supplies from PEMA, he said there has been an adequate amount of PPE, however each shipment is different from the one received before it.

“We have adequate supply, but every week we’re starting over with a new set of equipment,” Colombo said.

With PEMA, Colombo switched over to active duty orders for the Operation COVID-19 mission, in which he is serving as the senior medical liaison for the Pennsylvania Task Force South region.

“Any long-term care facility can call PEMA and express concerns with case load, as well as staffing because of illness,” he said.

In the event that a facility calls upon PEMA, a team made up of representatives from the CDC, the hospital accreditation program and National Guard members is sent to help.

The team goes through a series of evaluations and assessments to determine what their needs are, what kind of structuring needs to happen and how the National Guard can help augment their staff or provide mass testing.

Colombo has led all of the subordinate task forces that have provided mass testing to long-term care facilities.

“For example, today we were at a retirement village in Aston, Pa., where we tested about 180 staff and residents,” he said. 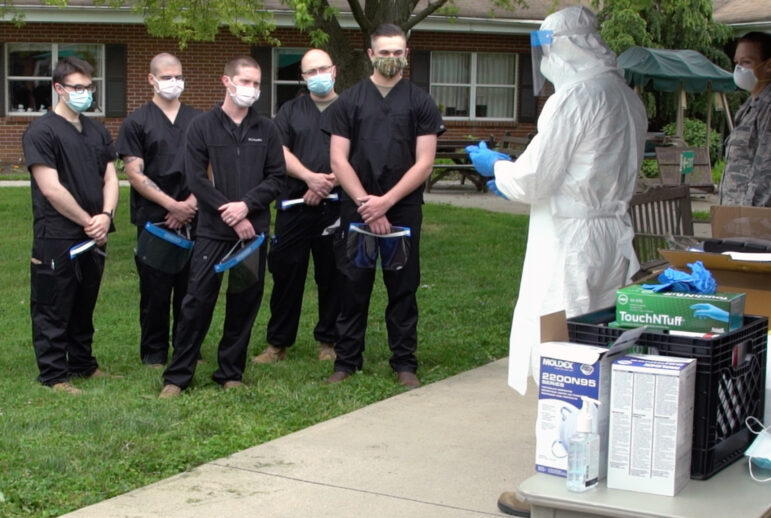 Moving forward amid the pandemic, Colombo said that within the medical field the focus is on preparing for the worst and hoping for the best.

“A lot of what we’re concerned about is that treatment is still very much ongoing,” he said.

There is still a lot of progress to be made on multiple fronts beyond just treatment, Colombo said. Developing a vaccine is obviously a top priority, however a good, reliable vaccine can take the better part of a year to be developed.

Another important development will be a reliable immunoglobulin test to help determine if some is currently infected, was previously infected or has developed any immunity to COVID-19.

“That’s when I think the fears of this will die down to more of a typical flu-type concern,” Colombo predicted.

For right now, he thinks the population should be increasingly focused on taking the necessary precautions to help slow the spread of the virus.

“Yeah, it’s uncomfortable wearing a mask, yeah, it’s annoying to carry hand sanitizer with you, but if you do those things you’re protecting not only yourself, but others,” he said.

Wearing his mask nearly everywhere he goes has become a habit for Colombo, given the environment in which he works. He does not want to be responsible to giving the virus to anyone else, especially his wife and son.

Perhaps there is no better testament to the effectiveness of properly wearing PPE and keeping up with hygiene than Colombo’s very own St. Luke’s University Health Network. The entire network is made up of nearly 16,000 employees, and he noted that their infection rate is among the lowest in the nation.

“I think that if you truly do everything you can to wear PPE the proper way at all the right times, and you’re performing proper hand hygiene you can mitigate your risk,” he said. “I feel like there are times where I practically swim in COVID and I have not gotten it.”

Editor’s Note: This is the second installment in a two-part series about the service of local National Guard members during the COVID-19 pandemic. Saucon Source extends our special thanks to the Defense Visual Information Distribution Service (DVIDS) for their assistance with the development of these profiles.