Editor’s Note: This is the first story in a two-part series about local heroes serving in the National Guard. The second story will be about Cpl. Dr. Adam Colombo of Coopersburg. We would like to extend our special thanks to the Defense Visual Information Distribution Service (DVIDS) for their assistance with their development.

Sgt. Kyle Hoffman, who is a CAV Scout for the Pennsylvania National Guard, has dedicated his life and career to service as well as giving back to the community.

Now residing just south of Coopersburg with his wife and three children, Hoffman grew up in the Kensington neighborhood of Philadelphia. For Hoffman, enlisting in the military was a chance to escape the troubled neighborhood in which he was raised.

“I lived in a really tough neighborhood in Philadelphia,” he said. “(Enlisting in the military) was kind of my way of getting out.”

Hoffman has spent the last 11 years with the National Guard, including one combat deployment to Kuwait for Operation Enduring Freedom.

“We were there to facilitate an ammo mission,” Hoffman said about the operation.

Hoffman and his unit were stationed at a port in Kuwait, securing the base for incoming vehicles, supplies and doing base security. In the nine-and-a-half months Hoffman was stationed in Kuwait he was fortunate to not be involved in any combat.

“We didn’t have any problems with locals or with anything we did,” he said. “We didn’t get into any sticky situations.” 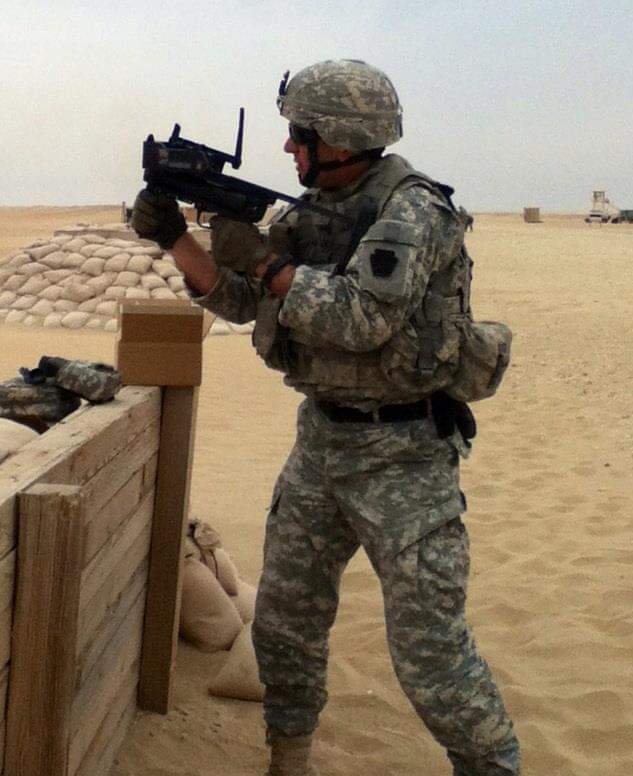 Sgt. Kyle Hoffman spent nearly 10 months stationed in Kuwait for a base security mission as part of Operation Enduring Freedom.

Hoffman has served his fair share of domestic activations during his more than a decade of service with the National Guard.

“I’ve been a part of just about every National Guard activation in Pennsylvania since I’ve been in the unit,” he said.

Hoffman has responded to every major hurricane disaster, including the Hurricane Sandy response in 2012. He has also worked with the Pennsylvania Emergency Response team in Philadelphia, providing services such as patient transport and road closures.

His unit is stationed right by the Schuylkill River, so river flooding can quickly become a problem. Sometimes his unit is tasked with pulling vehicles from the river during floods.

“It’s crazy, you never know what you’re going in there for,” Hoffman said. “State activations can be anything.”

One type of state activation Hoffman could have never anticipated was for the COVID-19 state of emergency earlier this year. 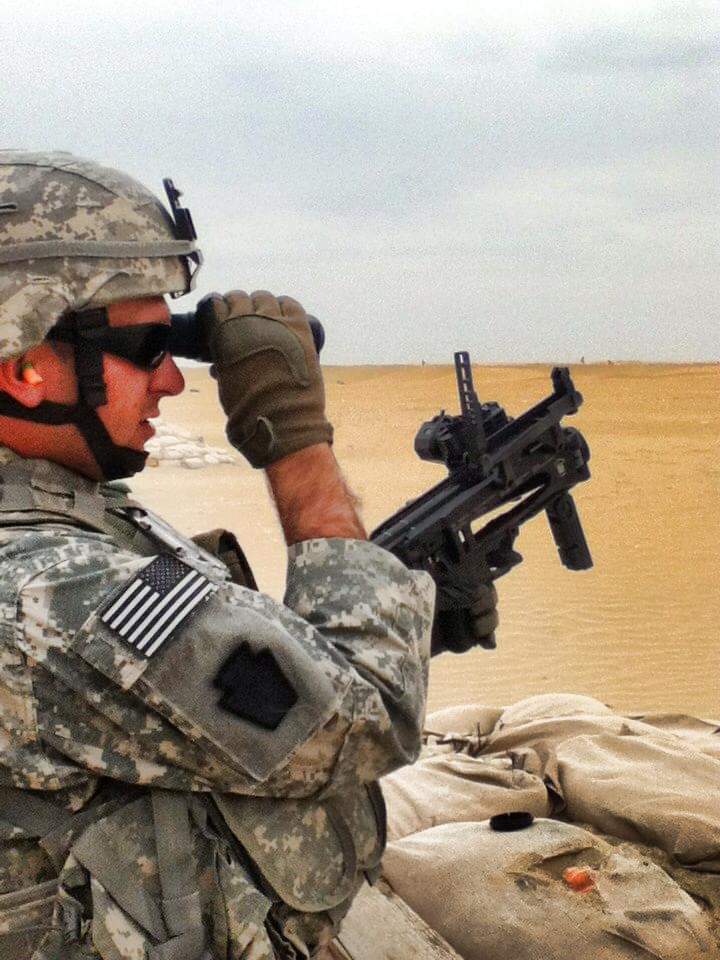 Sgt. Kyle Hoffman lives just south of Coopersburg with his wife and three children. Hoffman has spent the past 11 years working for the Pennsylvania National Guard, responding to a variety of activations including the 2015 papal visit, the 2016 Presidential Inauguration, the 2020 COVID-19 pandemic and this year’s Black Lives Matter protests in Philadelphia.

“The craziest thing about it (COVID activation) was we had no idea what we would be doing,” he said.

Hoffman and his unit thought they would be involved in moving vital supplies or setting up short-term medical facilities. Instead, Hoffman was tasked strictly with working with hospitals and the Philadelphia Medical Examiner’s Office as part of the Mortuary Affairs mission.

Such a tragic mission served as a reality check for Hoffman and the members of his unit.

“I had to pull some of my guys aside and ask them if they were OK with what we were doing, because they were asking a lot of us,” Hoffman said.

His unit was subject to a post-activation mental health exam and the National Guard brought in doctors to speak with and check up on the unit.

The conclusion of the Mortuary Affairs mission led Hoffman directly into another unique activation.

“The funny thing is my time with the COVID activation ended on May 31,” he said. “On June 1 I was activated again for the ongoing protests and riots in Philadelphia.”

Following a mentally-tasking activation with the Mortuary Affairs mission, Hoffman’s next deployment would prove to be an equally emotional experience for entirely different reasons.

“I was sent to the neighborhood I joined the military to escape,” Hoffman said.

His unit was sent to the Kensington area, the neighborhood where Hoffman was raised, to help guard property and businesses.

“It was almost storybook-like to come full circle in my military career and end it that way,” he said.

Hoffman said much of the looting and rioting that made the news last month had taken place before his unit arrived, in other parts of the area. Fortunately, much like his Kuwait deployment, he and the members of his unit were not involved in any tense situations.

“We actually got an unbelievable response from the people living there,” Hoffman said. “The people raising families there were very happy to see us, and they felt safer with us there.”

Previous domestic activations had prepared Hoffman for the type of response needed for the protests and riots. Hoffman worked the 2015 Papal visit to the city of Philadelphia. The following year he was trained for and worked the Presidential Inauguration in our nation’s capital. Both activations required the guard to control large, non-violent crowds.

In addition to his military service, Hoffman works as a union carpenter in Philadelphia. He also loves to golf and play soccer in his free time. He even used to coach the Quakertown High School soccer team for a few years.

Hoffman also serves on the board of directors for the Philadelphia Flyers Warriors hockey team. The team is a 501C3 nonprofit dedicated to bringing hockey to disabled veterans as a way to physically and mentally rehabilitate them once they get out of the military.

Hoffman said the organization is lucky to receive a lot of support from the Philadelphia Flyers organization, which is active in facilitating many of the team’s activities. Even the team’s coaches are Flyers alumni Brad Marsh and Bob Kelly. 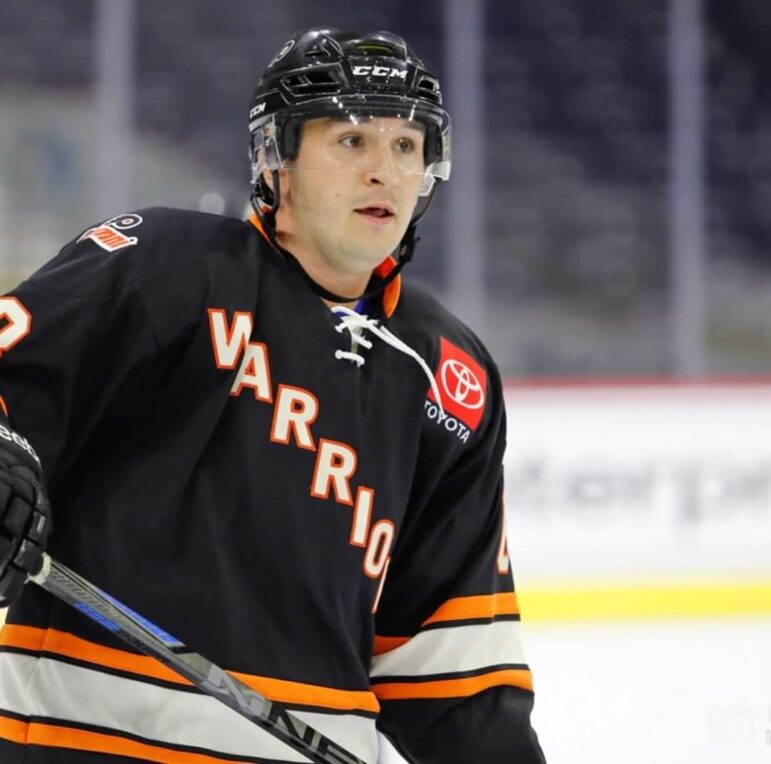 Sgt. Kyle Hoffman serves on the Board of Directors of the Philadelphia Flyers Warriors, a nonprofit organization dedicated to providing mental and physical rehabilitation to former service members through ice hockey.

“We reach out and we take veterans who are at least 10 percente disabled, and we put them on the ice,” Hoffman said.

The organization deals with veterans of all skill levels, ranging from people just learning how to skate to those who have played Division II college hockey. The team has several female players as well.

USA Hockey holds a national competition for the Warriors Program every year. The Philadelphia Flyers Warriors team attended last year’s competition in Las Vegas for the first time, and they ended up winning the championship.

While the accolades are nice, Hoffman said one of the more important functions of the organization is to provide relief from the everyday burdens of being a disabled veteran. The team helps players get back into the military mindset of brotherhood, teamwork and physically working together to accomplish a goal.

“That’s what a lot of these guys miss when they get out,” Hoffman said. 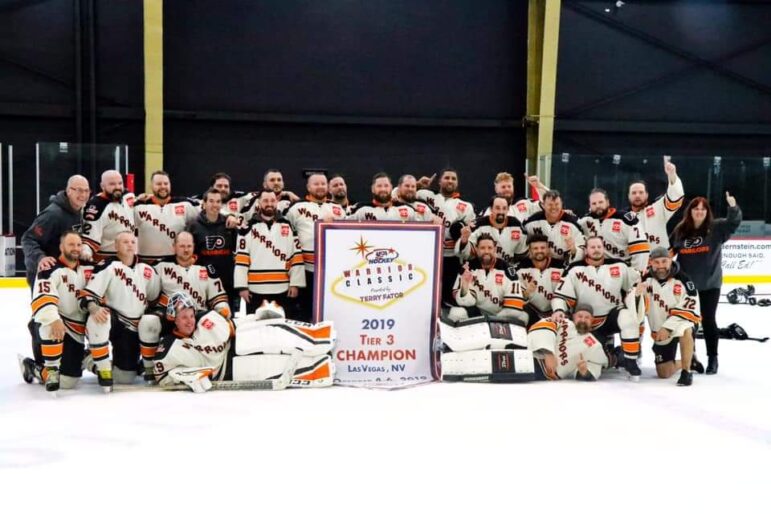 Throughout the pandemic the team has not been able to get on the ice together, but they have been doing weekly happy hours via Zoom. The Flyers organization has even brought in alumni to virtually talk to the group throughout the COVID emergency.

The simple act of meeting up virtually can be especially important for veterans in need of mental rehabilitation due to post traumatic stress disorder, or other mental health conditions. In the past year, the USA Warriors Ice Hockey program has dealt with four or five suicides nationwide.

“It shows you how important it is to check in on these guys, and keep track of your brothers,” Hoffman said.