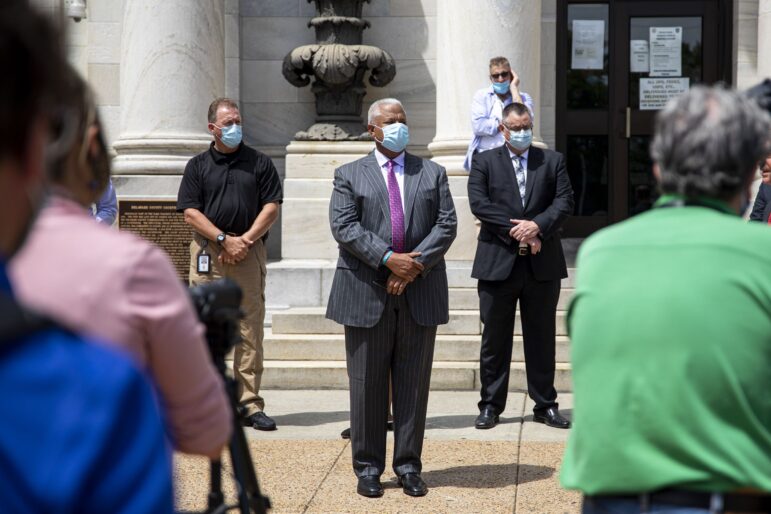 State Sen. Anthony Williams (D., Philadelphia), seen here at the Delaware County Courthouse, said in a statement he is following recommended health guidelines after being diagnosed with COVID-19.

Another lawmaker, Majority Leader Jake Corman (R., Centre), said he decided not to return to the Senate floor Tuesday for the voting session because he had been in contact with Williams in the last 14 days, and believed it was prudent to self-quarantine.

In a statement, Williams said he is following recommended health guidelines, and had informed Senate Democratic leadership and those he had come into contact with “so they can take the necessary steps to evaluate if they are running any risk.”

Williams also said he is shuttering his offices for two weeks “out of an abundance of caution.”

Brittany Crampsie, a spokesperson for Senate Democrats, said Williams received the result Tuesday. Fewer than 10 staffers who were exposed to the senator in recent weeks have been told to work from home, she said.

“We recommended they contact their personal physicians and seek a test, and we provided information for local testing centers,” Costa said in a statement. “If any of their tests are positive, we will expand our contact tracing.”

It was not immediately known when Williams took the test, what prompted him to seek one or when he was last in Harrisburg. He did not respond to a request for an interview. According to Crampsie, he began exhibiting symptoms consistent with the coronavirus last week.

Williams’ social media posts show he has attended a handful of in-person events over the last few weeks. They included a June 30 press conference at the Capitol with Costa and Sen. Vince Hughes (D., Philadelphia). All senators, including Williams, wore masks.

Hughes was also tested for COVID-19 on Tuesday, according to Crampsie.

Kate Flessner, a spokesperson for Senate President Pro Tempore Joe Scarnati (R., Jefferson), declined to comment on how the Republican caucus is dealing with Williams’ disclosure, saying only that the chamber has policies and protocols in place when there is potential exposure to COVID-19 in the workplace.

The policy outlines a series of steps Senate administrators must take when an employee tests positive, including disclosure to anyone who may have been exposed. But it is not clear whether the policy applies to elected members.

In an interview, Corman, who was in the Capitol on Tuesday, said as soon as he was told about Williams’ diagnosis he decided not to return to the Senate floor, where he plays a key role in moving the voting agenda. Corman said he was last in contact with Williams on June 30. Because public health officials advise people who believe they may have been exposed to the virus to self-quarantine for 14 days, Corman said he decided to play it safe.

“I just thought it was the proper thing to do, to be cautious,” said Corman, adding that he is not exhibiting symptoms.

Costa was on the Senate floor Tuesday. Crampsie said he “felt an obligation to go up to the floor and inform staff and members about the positive test, while wearing his mask. He left as soon as he could to go get tested.”

In late May–after a Republican House member revealed, a week after his diagnosis, that he had tested positive for COVID-19–Williams wrote Scarnati asking that the chamber mandate disclosure of a potential coronavirus exposure to all four caucuses in both the House and Senate.

In his letter, Williams noted that while the Senate had adopted a policy requiring disclosure of a coronavirus case, only people who work for the upper chamber would be informed.

“As the budget and other important bills have been negotiated over the past several weeks, staff and members from all four caucuses have interacted with each other in person, increasing the risk for chain transmission,” Williams wrote in the May 28 letter to Scarnati.

The belated revelation that Rep. Andrew Lewis (R., Dauphin) had tested positive for COVID-19 sparked outrage among his Democratic colleagues, who complained that they had been left in the dark about the diagnosis.

At the time, Lewis said he immediately began self-isolating after receiving the test result and that he informed House officials, who worked to identify anyone he may have exposed.

But while some Republican lawmakers were notified of their potential exposure and self-isolated as a result, Democrats said they only learned of it from a reporter, despite their own daily proximity to Lewis.