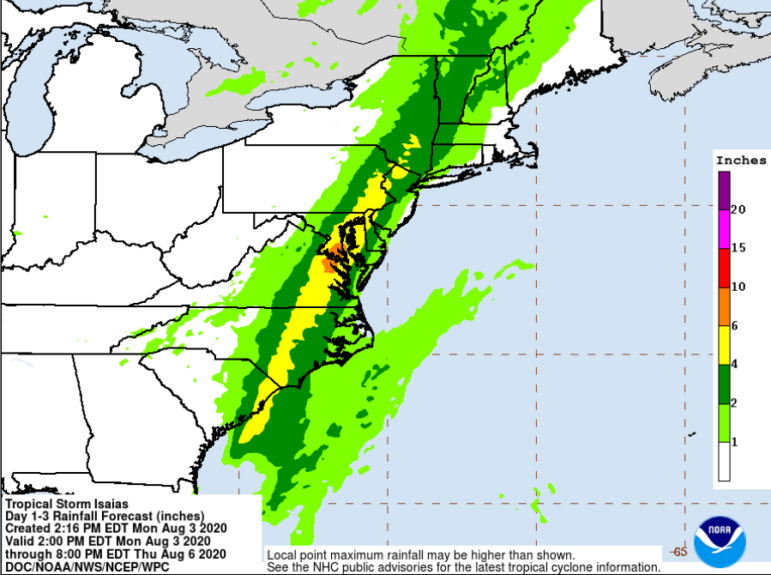 Four to six inches of rain is expected to fall as Tropical Storm Isaias moves across much of southeastern Pennsylvania late Monday and Tuesday. Locally higher amounts are also possible, the National Weather Service said in a 6 p.m. storm briefing.

If you live in a flood-prone zone, now is the time to be making final preparations for the possibility of rising water in the very near future.

Tropical Storm Isaias is approaching the region and bringing with it the potential for as much as six inches of rain, which the National Weather Service said in its 6 p.m. storm briefing could result in “significant flashing flooding.”

The greatest threat in terms of flooding across southeastern Pennsylvania will be to streams and some rivers–but not the Delaware River–the briefing indicated.

The NWS has also issued a flash flood watch for most of the area from 10 p.m. Monday through 12 a.m. Wednesday.

According to the watch, the bulk of the rain that falls is expected to occur over a relatively short period of time on Tuesday.

“Widespread amounts of three to six inches are forecast with locally higher totals possible,” the watch statement said. “The greatest totals are forecast across (the) northern Delmarva (peninsula) and along and northeast of the I-95 corridor.”

A shaded map included with the 6 p.m. briefing shows the Lehigh Valley, Berks County and other parts of Pennsylvania that are north and west of I-95 in a zone that will see the “greatest potential for flash flooding through Tuesday.”

In general, high winds from the storm are expected to occur closer to the coast, however there is a 50 to 60 percent chance that the Lehigh Valley area could see tropic storm force winds of 39 mph or greater by early Tuesday afternoon.

There will also be a threat for isolated tornadoes closer to the coast, where tropical storm warnings have been issued for many areas.

The National Weather Service said minor to locally moderate coastal flooding–particularly in the area of the Chesapeake Bay–could occur Tuesday as a result of an expected 1 to 3 foot storm surge.

As a result of the forecast, motorists are being reminded to avoid driving through flooded roads.

“Never drive around barricades or signs on closed roads,” PennDOT officials said in a news release about the storm, noting that driving around a barricade can also result in a fine. “Turn around, don’t drown.”

Residents of the Lehigh Valley and beyond are encouraged to monitor their local forecast for updates on Tropical Storm Isaias–especially if they live in a flood-prone location–and to be prepared to take action if a flash flood warning is issued for their area.

Motorists can check 511PA before they travel for the latest conditions on more than 40,000 miles of road in the state. 511PA, which is a free service, provides traffic delay warnings, weather forecasts, traffic speed information and access to more than 1,000 traffic cameras at 511PA.com and as an app available for iPhone and Android devices.