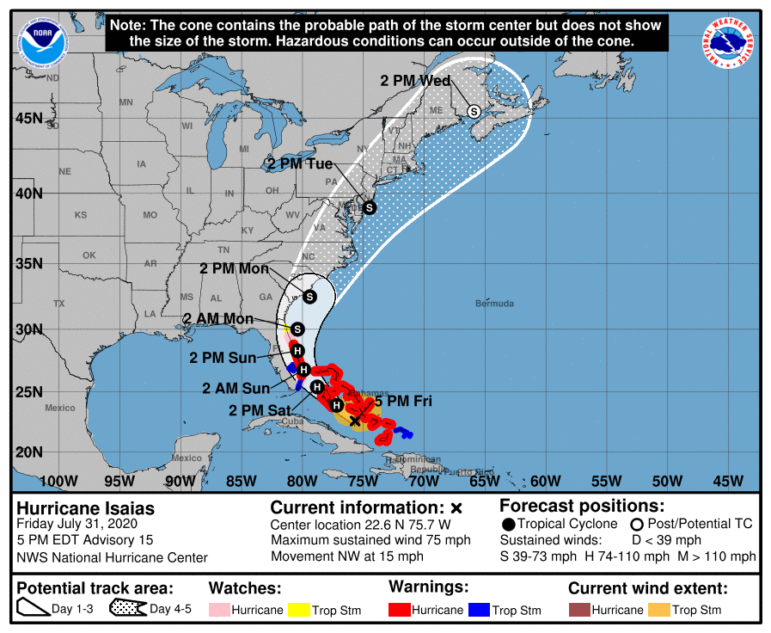 This map released at 5 p.m. July 31 shows the current forecast cone for Hurricane Isaias, which is expected to impact parts of the Eastern Seaboard in the coming days.

Some people awoke to a deluge Friday morning, but overall the second half of July has been exceptionally dry (and hot) in eastern Pennsylvania. That could all be about to change.

As the calendar page is turned to August, meteorologists are keeping a close eye on the track of Hurricane Isaias, which is churning in the Caribbean Sea near the Bahamas.

The website PA Weather Action is predicting a track toward the Outer Banks of North Carolina.

“We are confident Hurricane Isaias will make landfall between Jacksonville, N.C., and Avon, N.C.,” lead forecaster Josh Adams wrote in a post Friday. “However, where the storm moves after that is still somewhat unknown.”

Adams said the trend in model guidance for Isaias since Thursday has been “for the storm to ride right up the East Coast, nearing Ocean City, Md., and Long Island before making another landfall in Cape Cod, Mass.,” Monday into Tuesday.

Adams also shared an infographic labeled “Isaias Concerns,” which has areas along the Eastern Seaboard shaded as “Prepare” (closer to the coast) and “Aware” (further inland).

Within the zone in which residents should be “aware” of the storm are Philadelphia, New York and Boston. Although some of the Philadelphia suburbs are also within that zone, its far northern and western burbs–along with the Lehigh Valley–are just outside it.

Individuals who live closer to the coast or who will be vacationing there early next week should already be taking action to prepare for the storm, Adams warned.

“If you are located in far eastern North Carolina, the eastern Del-Mar-Va (including Ocean City, Md.), extreme coastal New Jersey, eastern Long Island or southeast New England, you should be making preparations for potential significant impacts from Isaias,” he said. “All of those stated areas are at risk of seeing wind gusts of up to 80 to 110 mph from Hurricane Isaias Monday or Tuesday (depending on location).”

As of Friday evening, the National Weather Service had not issued hurricane or tropical storm watches for the New Jersey shore. However, a NWS hazardous weather outlook warns of the potential for heavy rainfall, tidal flooding, rip currents and dangerous surf.

A NWS hazardous weather outlook for the Lehigh Valley Friday indicated that “excessive rainfall” could lead to flooding and is likely to be the main threat from Isaias, but only if the storm tracks close enough to the coast to spread rain across eastern Pennsylvania.

That remains a possibility, since roughly the eastern half of the state is within the National Weather Service and National Oceanographic and Atmospheric Association’s (NOAA) “cone of probability,” a forecast tool which contains the storm’s probable path.

As of late Friday afternoon, the forecast cone for the storm shows it as a tropical storm centered off the coast near Cape May, N.J., by 2 p.m. Tuesday. Tropical storms have sustained winds of 39 to 73 mph.

Currently, Isaias is a Category 1 hurricane, with sustained winds of 75 mph. The hurricane is just south of the Bahamas and moving northwest toward Florida at 15 mph, according to NWS data.

Residents should continue to monitor their preferred local weather forecasts for updates on the storm’s track.