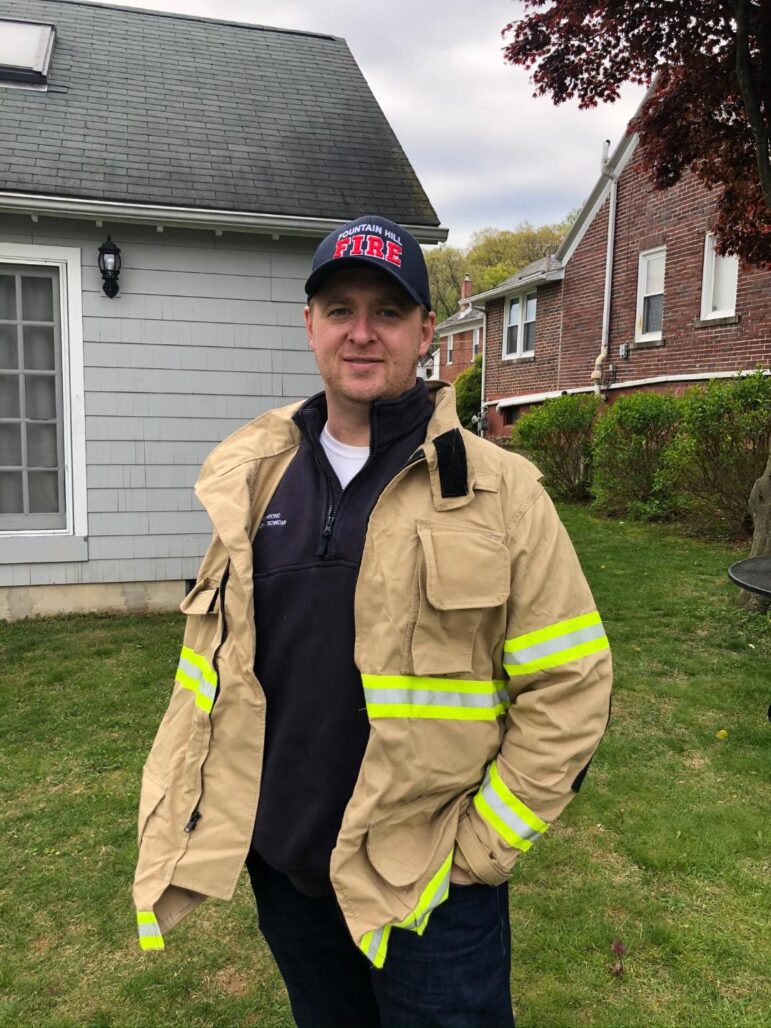 Derek Richmond was elected as the new fire chief for the Fountain Hill Fire Department on Aug. 3, 2020. Richmond has been serving with the department since 2016 in various roles, including lieutenant and assistant fire chief.

Last Monday, Aug. 3, the Fountain Hill Fire Department elected Derek Richmond to the position of fire chief. Richmond, who was previously serving as assistant fire chief for the department, took over for Rick Reis, whose most recent stint as fire chief began in 2018.

Richmond has been serving on the Fountain Hill Fire Department since he and his wife moved to Fountain Hill in 2016, when his wife took a job with ArtsQuest. He began his service with the department as a volunteer firefighter, before advancing to fill the roles of lieutenant and assistant fire chief.

The new chief has also worked as an attorney for 0ver ten years, before recently starting a new position as the associate editor for Woodcraft Magazine.

“This job allowed me to combine my love of woodworking and writing,” Richmond said. “It also allows me to work from home, which is great with a young family,” he continued, alluding to his two-year-old son, Wyatt.

Richmond, who grew up in Florida, boasts more than a decade of firefighting experience as well. His firefighting career began in 2007 as a volunteer firefighter with the City of Fairfax Fire Department in Virginia.

“I went through fire school down in Virginia for Fire One and Fire Two certification,” Richmond said. He also worked as an EMT in Fairfax before he and his wife relocated to Fountain Hill, where his wife’s family is from.

For Richmond, stepping into the role of fire chief was something he was prepared for and willing to do.

“I’ve always been of the mindset that I will do what the department asks of me, and at this moment that is what is being asked of me,” he said.

A top priority of the new chief is serving his community to the best of his abilities.

“Ultimately, we want to have a functioning department that works for the residents of Fountain Hill,” he added. 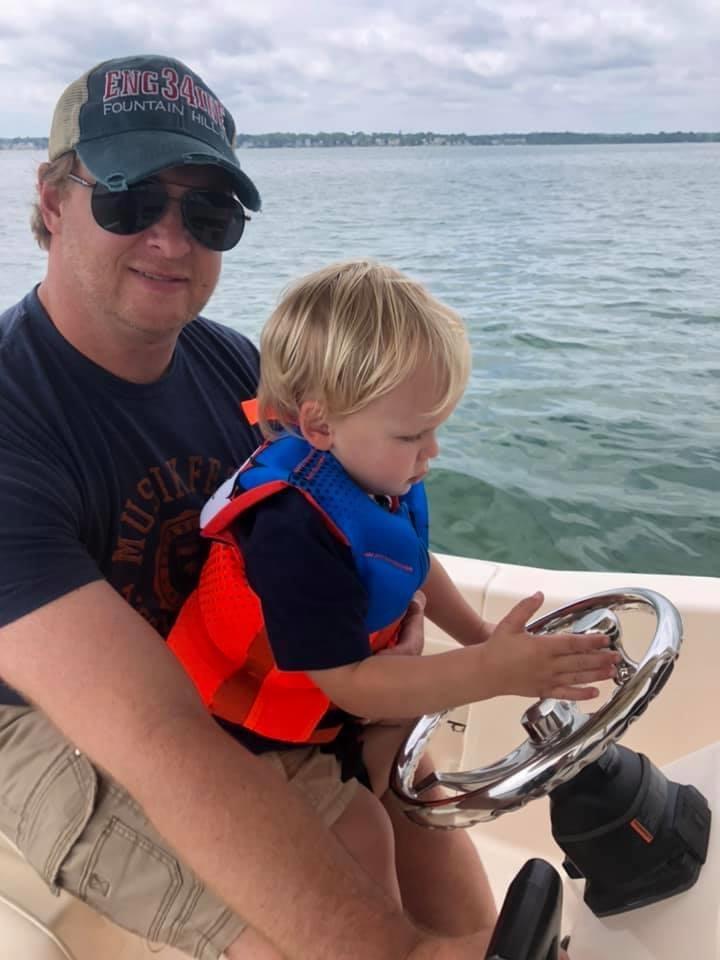 Fire Chief Derek Richmond is seen with his 2-year-old son, Wyatt. In addition to serving on the Fountain Hill Fire Department, Richmond works as the associate editor for Woodcraft Magazine, and he is the assistant coach of Lafayette College’s crew team.

Richmond is looking forward to continuing the progress the fire department has been making in recent years, and is dedicated to overseeing its growth.

“We’re going to begin a review and possibly a revision of our standard operating procedures,” he said.

The fire department has also been working closely with borough officials on the purchase of a new fire engine.

“Any time a department gets a new piece of apparatus it is an exciting moment,” Richmond said. “To be chief while that is going on adds a little something to it.”

The new Chief was quickly called into action his first week on the job after Tropical Storm Isaias produced significant amounts of rain and flooding in eastern Pennsylvania.

“We had a number of pump-out calls in the borough,” Richmond said. “People’s basements were covered in water, and they called us and we were able to get that emergency taken care of.”

Richmond explained that an unfortunate reality of living on Fountain Hill is that heavy rainfall, which moves down the hill, can cause serious damage and major flooding. One Fountain Hill property had nearly three feet of water inside, Richmond said.

“Living on the hill like this, you get water running down the hill, and it’s gonna find the weakest point,” he said. “Unfortunately, sometimes that’s someone’s basement wall or foundation.”

Fortunately, Richmond’s background growing up in Florida exposed him to plenty of hurricanes and torrential rains. He has also performed pump-outs with the Fountain Hill Fire Department previously, so he and his team were prepared to deal with last Tuesday’s weather event.

“I thought everybody involved, both in our department and the surrounding departments who supported us, did exactly what needed to be done,” Richmond said. “We got the job done, and that’s always the goal.”

As the fire chief, Richmond will focus on recruiting new members, continuing with training regimens and providing the best service possible for the residents of Fountain Hill. He said he is fortunate to be surrounded by a strong group of firefighters with plenty of experience.

“We’ve got a couple of great assistant chiefs, a great lieutenant and an awesome group of firefighters who, when called, they respond, and you can’t ask for anything more than that.”