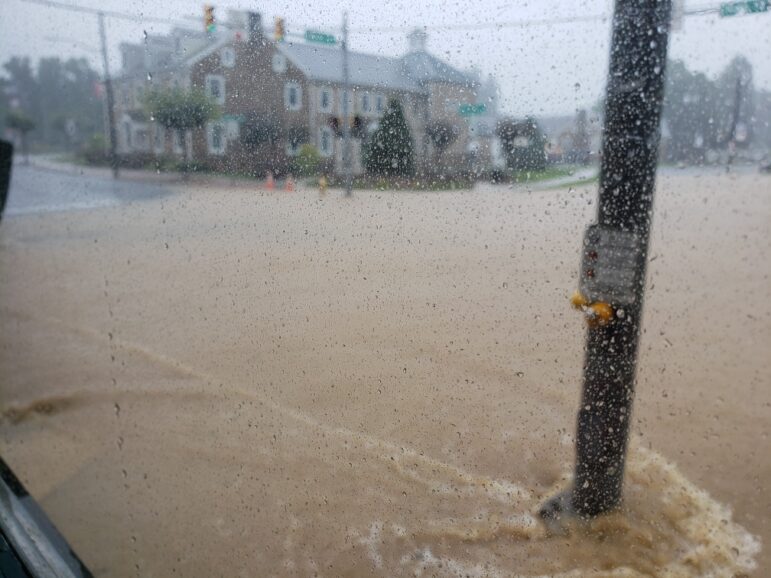 A photo taken around noon Tuesday shows the intersection of Main and Water streets–one of the busiest in Hellertown–submerged under flood waters that have also inundated parts of the 600 block of Main Street.

Tropical Storm Isaias has lived up to the hype in eastern Pennsylvania Tuesday, producing torrential rains that have flooded parts of Main Street in downtown Hellertown as well as numerous roads in Lower Saucon Township and surrounding areas.

Photos taken around noon by an eyewitness to the Hellertown flooding show part of the intersection of Main and Water streets as well as the 600 block of Main Street submerged by the floodwaters of the Silver Creek, which is diverted beneath the roadway in that block and has contributed to significant flooding problems in the past.

Even with sump pumps working at full tilt, basements in the historically flood-prone area were reportedly filling with storm water. Cars parked in the area of the flash flooding were also in danger of being flooded out.

The borough announced in an email that Main Street between Penn and Water streets along with sections of Harris Street, Water Street and the intersection of Polk Valley Road and Main Street were all closed as of 12:30 p.m. due to flooding.

A Facebook video posted by Saucon Valley Sporting Goods–which is located on Water Street–shows that flood waters had turned the road into a veritable river as of mid-day.

Other videos recorded in the general area of Main and Water streets also depict the devastation being caused by the raging flood waters.

In Lower Saucon Township, township roads that have been closed until further notice due to flooding include Mountain Drive between Woodfield and Goodman drives, Reading Drive from Bingen Road to Creekview Road, Skibo Road from Walnut Street to Victor Road, Alpine Drive from Lower Saucon Road to Apple Street and  Riverside Drive from Jefferson Avenue through the Narrows in the area of Steel City. The township has been updating residents about road closures using its Nixle mobile alert system.

A flash flood warning issued by the National Weather Service is in effect for all of Northampton and Lehigh counties as well as surrounding counties through 3:45 p.m.

A flash flood warning means flooding is either imminent or occurring, and residents living along streams and creeks should take immediate precautions to protect life and property, including potentially moving to higher ground.

“At 11:42 a.m., Doppler radar indicated thunderstorms producing heavy rain across the warned area,” the NWS said in an accompanying statement. “Up to two inches of rain have already fallen. Flash flooding is ongoing or expected to begin shortly.”

As much as six inches of rain with locally higher amounts was forecast for the area as a result of Isaias, which is also producing strong winds and isolated tornadoes closer to the Atlantic coast.

State and local officials including law enforcement agencies and PennDOT are urging residents to avoid unnecessary travel during the storm. If travel is essential, motorists should not attempt to drive through flooded roadways or around barricades.

The heaviest rainfall from the storm–which has fallen at rates of up to two or three inches per hour–is forecast to move out of the area by late Tuesday afternoon.

Residents should continue to monitor local weather forecasts and news outlets for updates on this developing severe weather event. 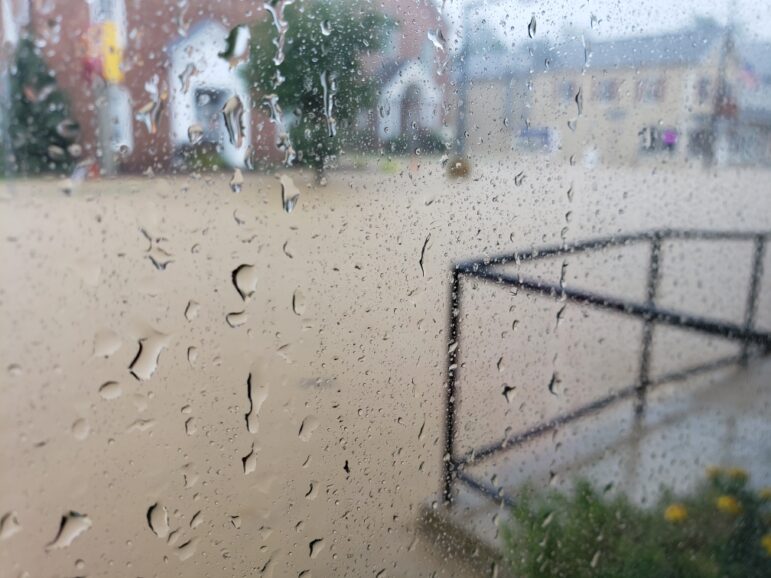 The 600 block of Main Street near the intersection of Main and Water streets is submerged by flood waters from Tropical Storm Isaias, which has dumped at least several inches of rain on the area in a short period of time. 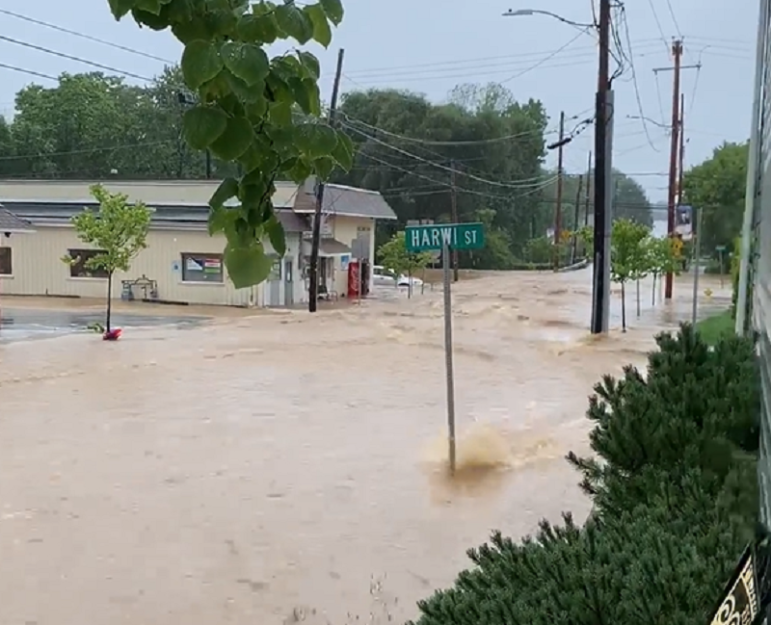 A screenshot of a video taken by Saucon Valley Sporting Goods outside their store shows flood waters raging on Water Street in Hellertown borough. This view is looking west toward the Water Street Bridge and the Saucon Creek. 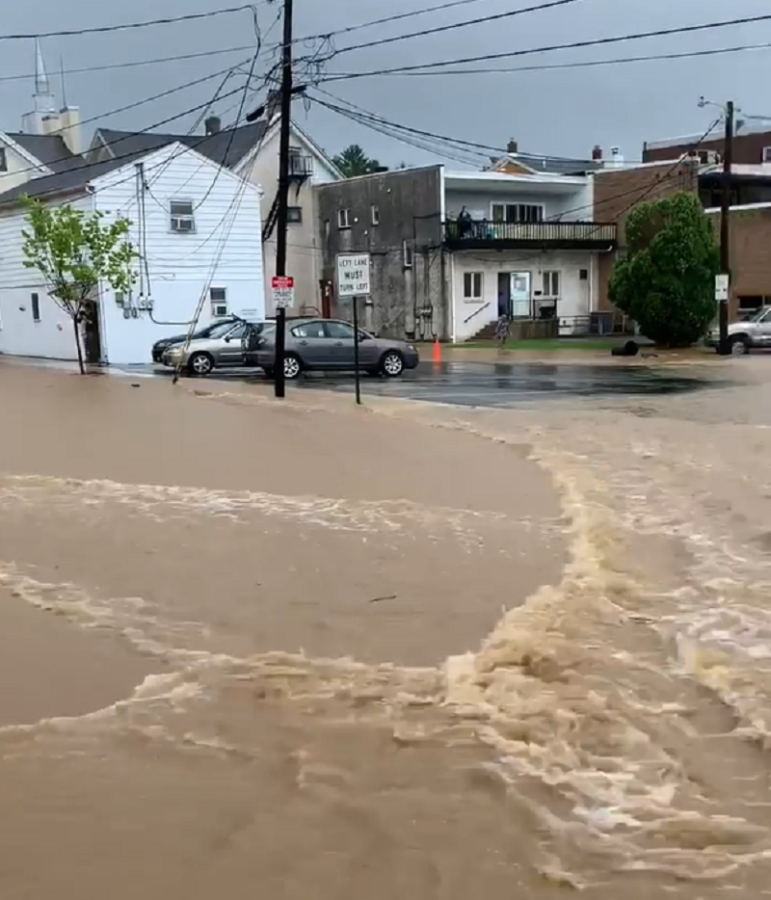 A screenshot from a video recorded by Saucon Valley Sporting Goods shows Water Street in Hellertown badly flooded as a result of torrential rains from Hurricane Isaias Tuesday. This road and others throughout the area are closed until further notice because of the severe flooding occurring. 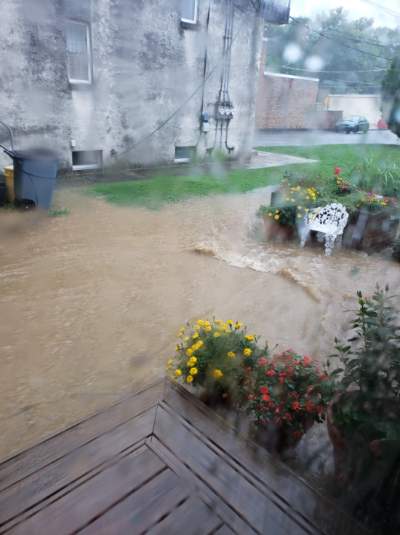 Pictured: Flood waters fill the backyard of a building in the 600 block of Main Street, Hellertown borough, near where the Silver Creek is diverted underneath several buildings on its way to meeting the Saucon Creek.