The building at 662 Front Street in Hellertown, which was formerly a JCL Automotive shop, will soon undergo a major makeover.

Saucon Valley resident Franco DiCarlo has been working toward renovating the building and turning it into a modern, open-concept pizza and casual dining restaurant for close to a year.

“The concept of repurposing the building is something we always thought would be super cool,” DiCarlo said.

He cleared another hurdle toward executing his vision for the building at the Sept. 9 Hellertown Planning Commission meeting, where members of the commission motioned to accept his application for a full $10,000 reimbursement as part of the borough’s Facade Improvement Funding program.

At the meeting DiCarlo presented borough officials with plans to install new doors for the building, as well as a new paint scheme for the building’s exterior. Estimates for the work exceed $21,000. 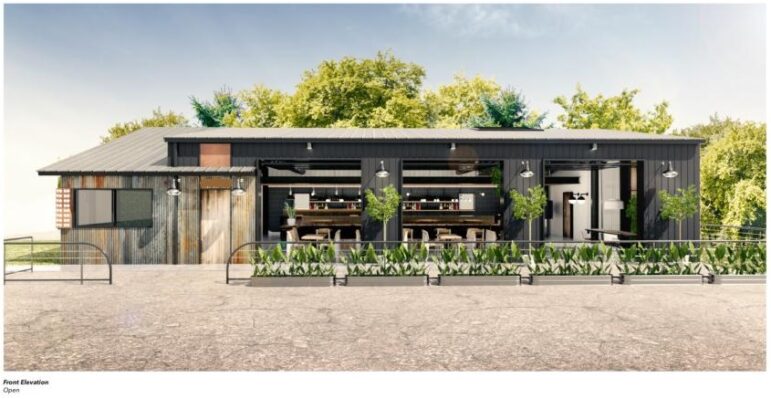 Saucon Valley resident Franco DiCarlo provided Hellertown officials with this sketch of his plans for the renovations to the building at 622 Front Street in Hellertown. The building will soon undergo a massive transformation into a modern, open-concept restaurant.

“What used to be this cold mechanic’s garage, now comes to life with such natural elements to it,” DiCarlo said.

The restaurant will also feature a full bar, and will have walk-up service windows available for people wishing to place an order coming as they come off the Saucon Rail Trail or walk over from Main Street. DiCarlo is even having a wood-fired oven shipped over from Italy as a centerpiece for his new kitchen. The oven burns at almost 850 degrees, and it can cook a pizza in about 90 seconds, DiCarlo said.

All of the improvements are part of DiCarlo’s efforts to build a dining experience that is modern, unique and far from your typical pizza shop.

“This is really about having an open-concept with an outside-inside blend as much as possible,” he said. “I think the Lehigh Valley is not only ready for it, I think they want something like this.”

Hellertown Borough Council will have the final say on whether the borough provides funds for DiCarlo at their next council meeting. In the meantime, DiCarlo is working on filing for permits and executing all renovation work as it is scheduled.

He said he hopes to open the new restaurant later this year or early 2021.