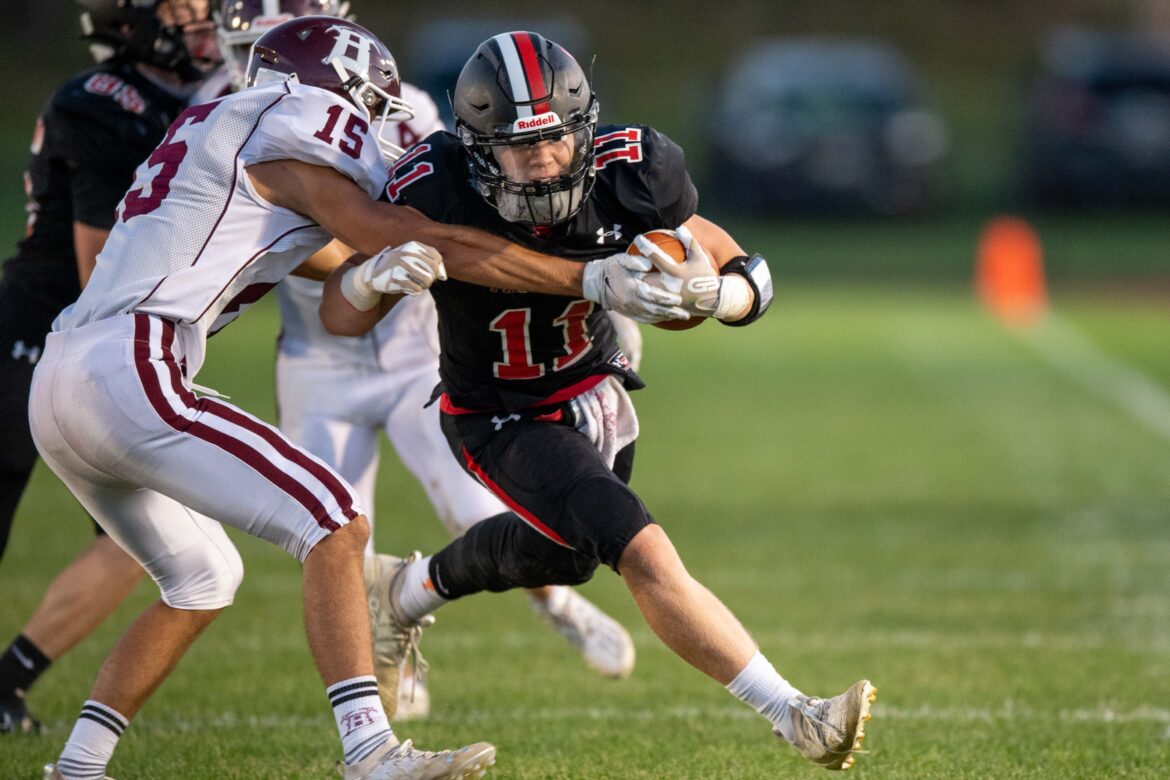 Junior Ty Csencsits had 8 catches for 113 yards for the Panthers.

The Saucon Valley Panthers got to play a football game Saturday night at Montford E. Illick Stadium on Saturday night. The stands were empty, but after missing almost two full weeks of practice due to a positive COVID test in which the entire football team was required to quarantine, Saucon Valley finally was able to take the field against the Bangor Slaters. With all the high hopes and excitement that a new season brings, Saucon’s football future was finally under way. However, with only two days of practice after the prolonged layoff, the Panthers struggled to find any sort of consistent rhythm. Saucon Valley was far from a fine-tuned machine.

Saucon Valley won the coin toss and elected to defer their option until the second half. Bangor, of course, chose to receive the kickoff and rattled off 11 straight running plays and capitalized on a 72-yard touchdown drive. The PAT was good and Bangor took a 7-0 lead with 8:13 left to play in the opening quarter.

Saucon battled back driving to the Slater 35-yardline. However, a series of miscues including a sack and two penalties pushed the Panthers into a 3rd & 25 situation from midfield. Saucon Valley ended up punting away to the Slaters. 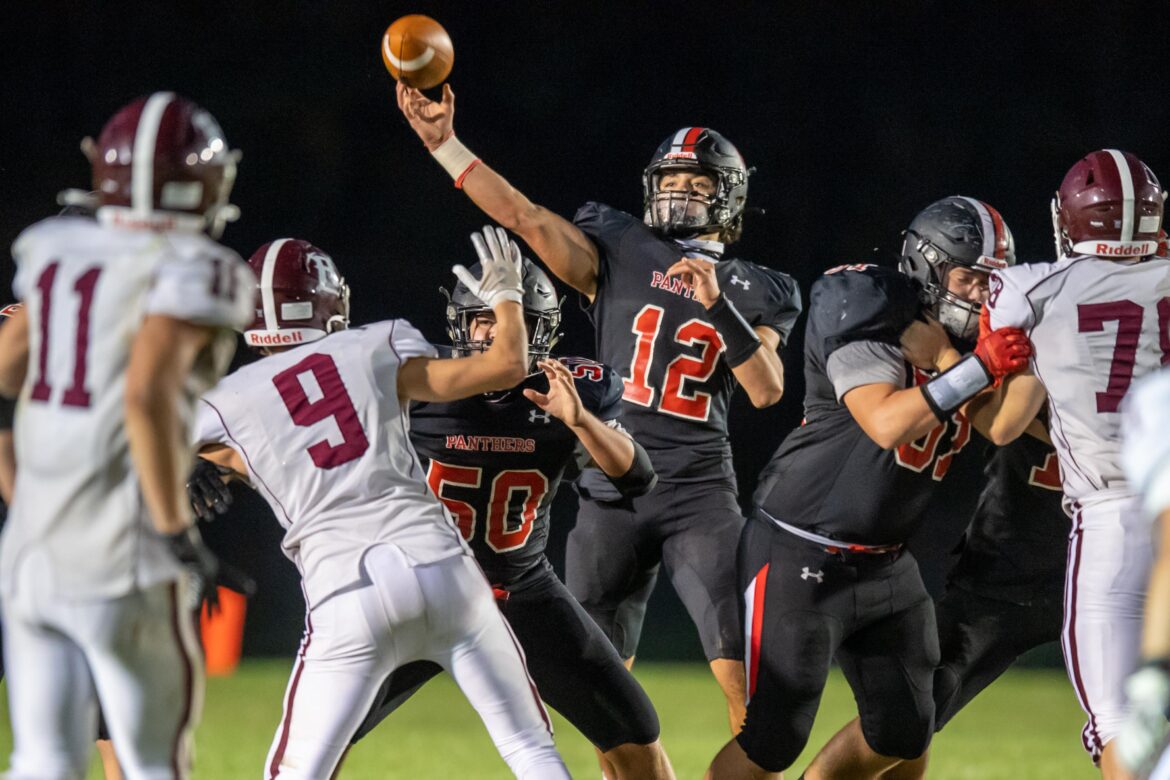 Dual-Threat-Dante Mahaffey led the Panthers with 240 yards of total offense and two scores.

The two teams would alternate possessions until the Panthers got going after a Slater punt to their own 24-yardline. Using a little run-pass mix the Panthers covered 76 yards to the endzone in only five plays. The Panthers’ Josh Torres carried three times for 22-yards while quarterback Dante Mahaffey and receiver Ty Csencsits accounted for the rest through the air with a 17-yard completion and a 37-yard touchdown pass where Csencsits split the Slater safeties on a post route. The PAT was blocked and the Panthers trailed 7-6 with just over eight minutes remaining in the first half. 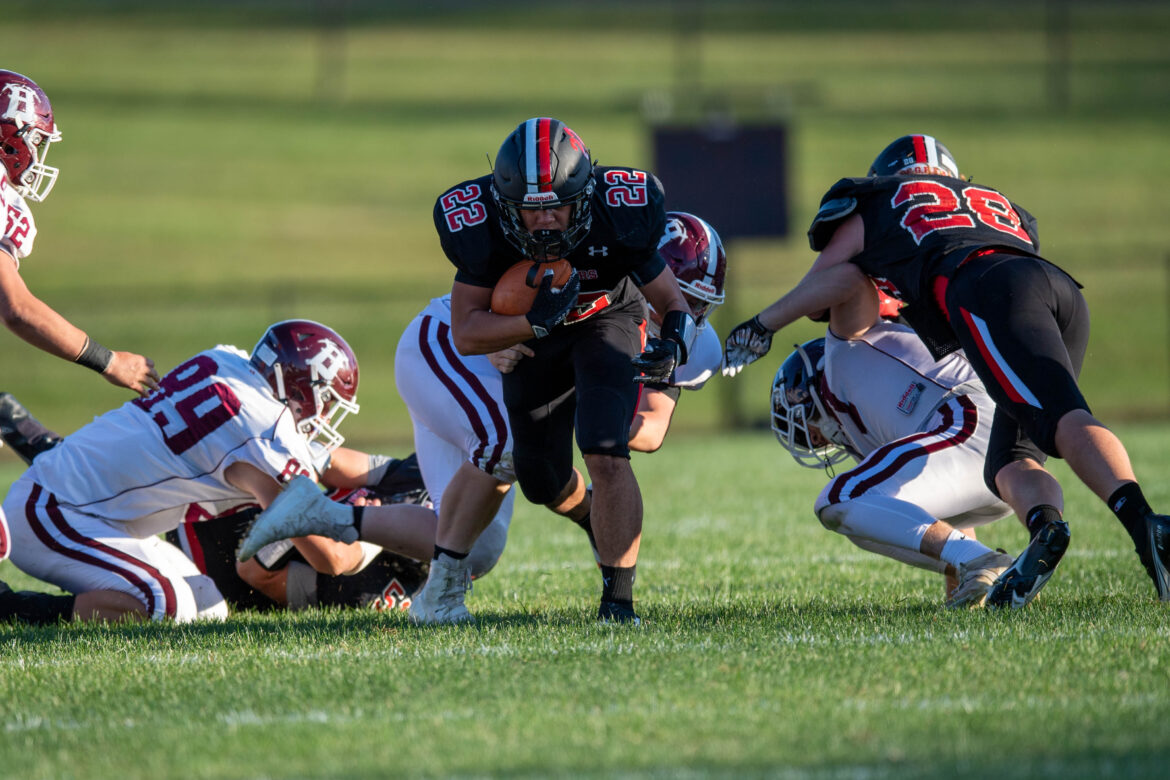 Sophomore running back Josh Torres ran hard for the Panthers.

Bangor came right back with a 12-play drive that ended with a 14-yard touchdown scramble by quarterback Eric Striba. The extra-point was good and the teams hit the intermission with Bangor holding a 14-6 lead.

Saucon started the second half with good intentions and secured a first down.  However, when forced to punt from their own 30-yardline three plays later, disaster struck as Alex Magnotta’s kick was blocked. The Slaters recovered the ball at the Panther 5-yardline. On the very next play, Bangor’s Jared Reto took the plunge up the gut for a TD. The PAT clanked the iron and was no good. Saucon had their work cut out for them as they trailed 20-6 with 9:04 remaining in the third quarter. 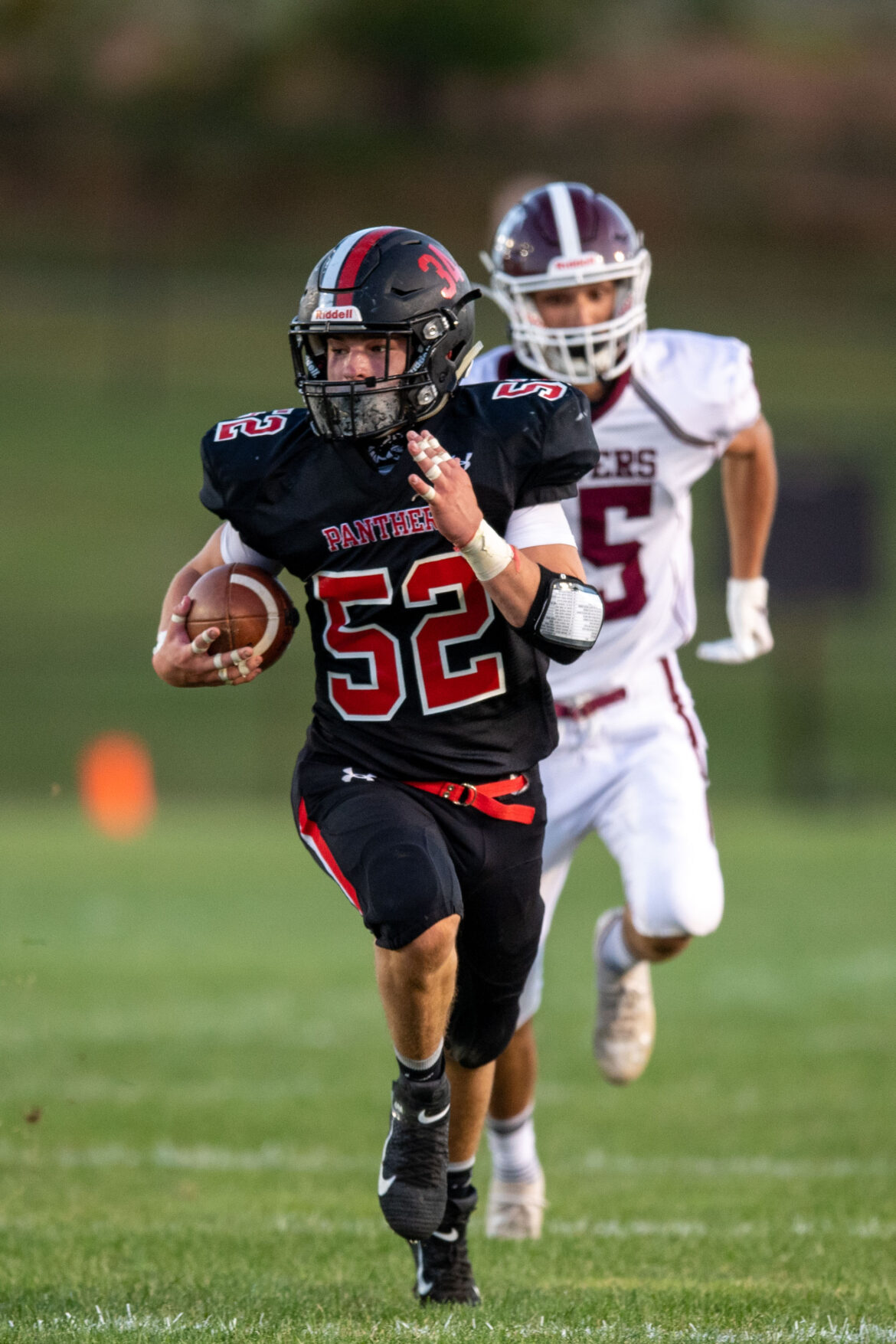 The Panthers did not quit. On 1st & 10 from their own 30-yardline, Mahaffey called his own number and scampered around left end for a 50-yard run. However, three plays later with 1st & Goal from the Slater 9-yardline disaster seemingly struck again. The Panthers fumbled and the Slaters rumbled out to the Panther 28-yardline. However, four plays later, Bangor gave it back when sophomore linebacker Ty Pfizenmayer intercepted Striba’s pass and scooted 48 yards for a pick-six. The Panther PAT was good and Saucon Valley made it a one-score deficit at 20-13.

Only three plays later the opportunistic Panthers pounced on a Slater fumble at the Bangor 29-yardline. Six plays later Saucon sophomore Josh Torres found the endzone on a 1-yard plunge. Mahaffey and Csencsits hooked up on a couple of pass plays totaling 39-yards to put the Panthers in position to score. The PAT was wide left, but Saucon Valley trailed by a single point. With the final quarter left to play, Bangor led 20-19.

Bangor powered right back for another touchdown. The Slaters covered 68-yards in 13 plays. Striba hit home with a 5-yard run around the right end for the score. The PAT was no good and with 5:40 left in the game Saucon Valley was down 26-19. 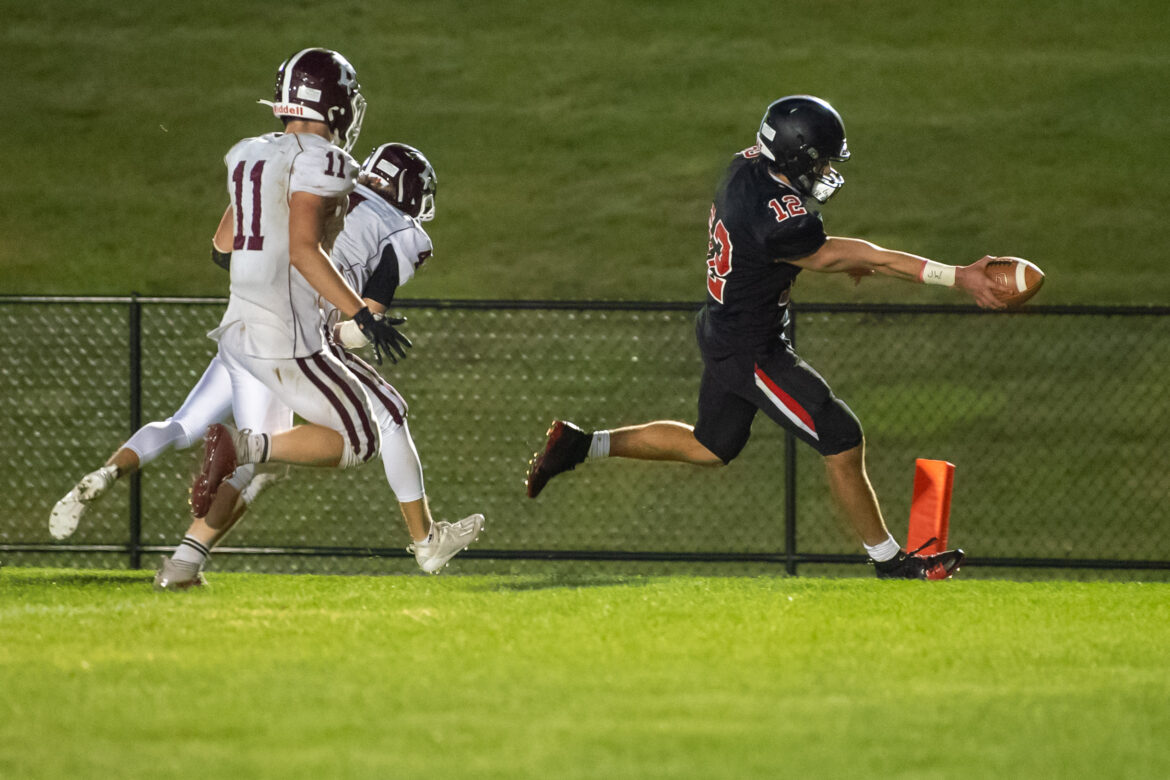 Junior quarterback Dante Mahaffey finds room around the left side for a score.

The Panthers fielded the Slater kickoff and took possession at their own 25-yardline. Seven plays later, Mahaffey scrambled around left end for a 16-yard TD run. The key play on the drive was a beautifully-placed Mahaffey throw down the Panther sideline for 30-yards into the hands of sophomore receiver, Alex Magnotta. Unfortuantely, the Panther kicking woes continued as Saucon could not convert the PAT. With 3:11 left to play they  trailed 26-25. 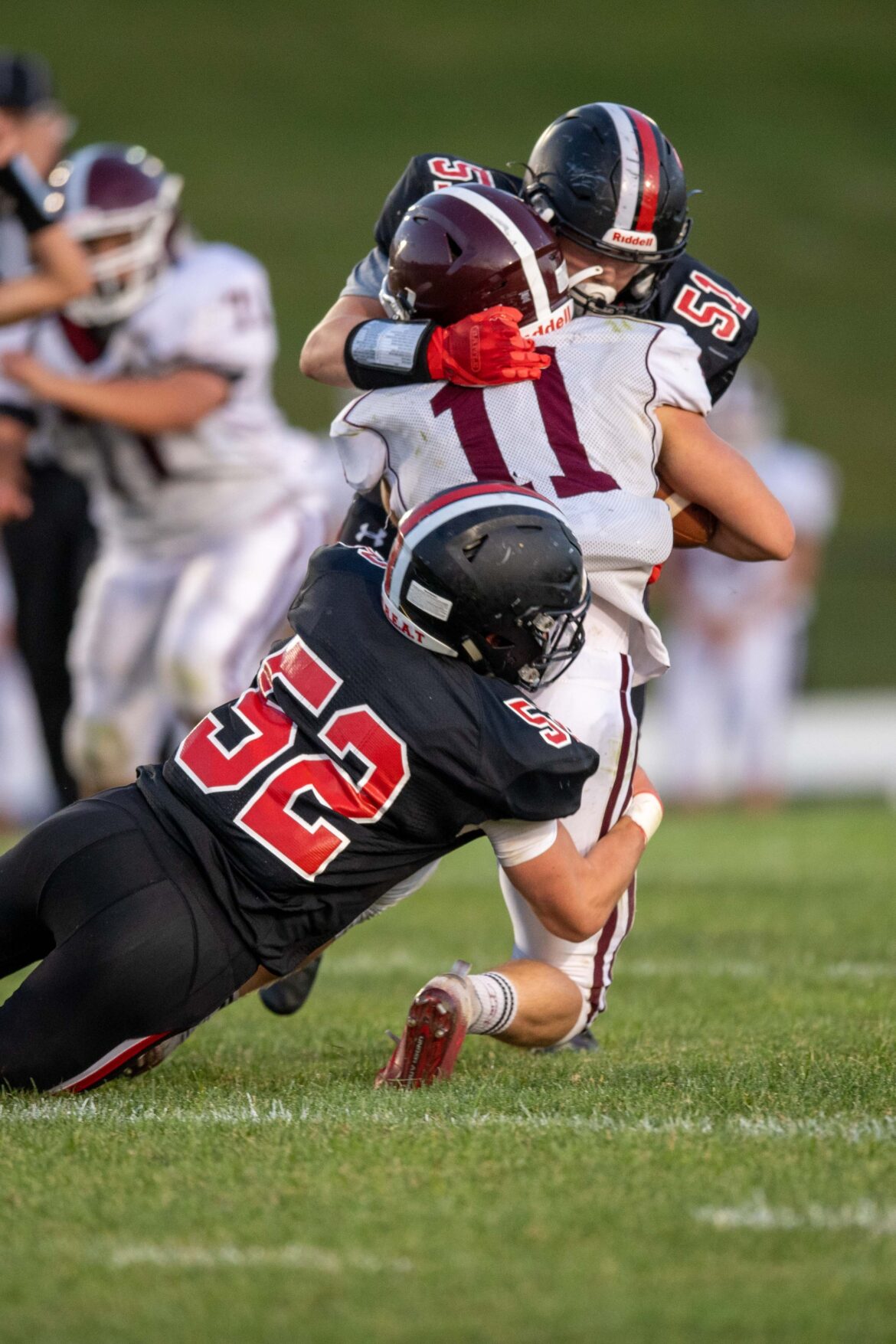 Ty Pfizenmayer (52) and Reed Ernst (51) making a big defensive play for the Panthers.

Saucon Valley would get one more chance on the next series due to Chris Mann’s strip sack on 3rd & 8. Mann came hot off the edge from his defensive end position and separated the ball from the Striba. An alert Michael Cordes pounced on the pigskin at the Slater 24-yardline. The Panthers, however, could not pick up the first down as the referee marked Mahaffey’s last-ditch-effort run just shy of the first-down.

Bangor took possession at the Panther 16-yard and picked up a first down, causing Saucon Valley to burn all of their timeouts. With 1:31 left in the game and trailing by only one point, the Panthers actually let Bangor score to take a 32-25 lead. Bangor, however, was able to convert their two-point conversion, putting the game out of reach. The Panthers fell to the Slaters 34-25 in their home opener.

On Friday, the Panthers travel to Center Valley to take on the Spartans of Southern Lehigh at 7 p.m.

Be sure to subscribe to receive notifications about upcoming livestreams, which are the best way to catch the action due to restrictions on public gatherings that currently limit the number of fans permitted at high school athletic events.

Good luck, Panthers. The Source is with you!

Check out these great photos and more by Chris Christian and click here to watch the Saucon Valley-Bangor game. 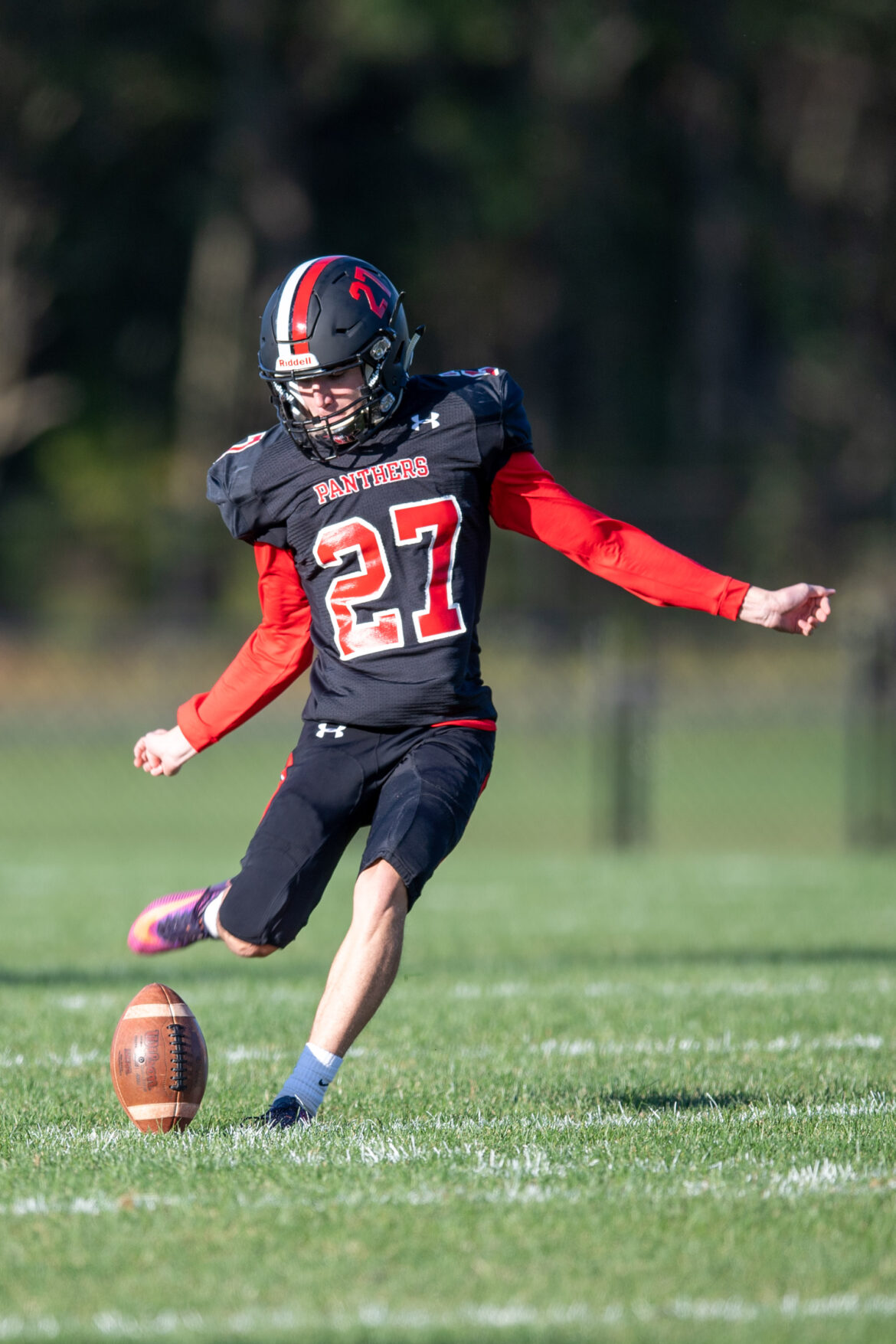 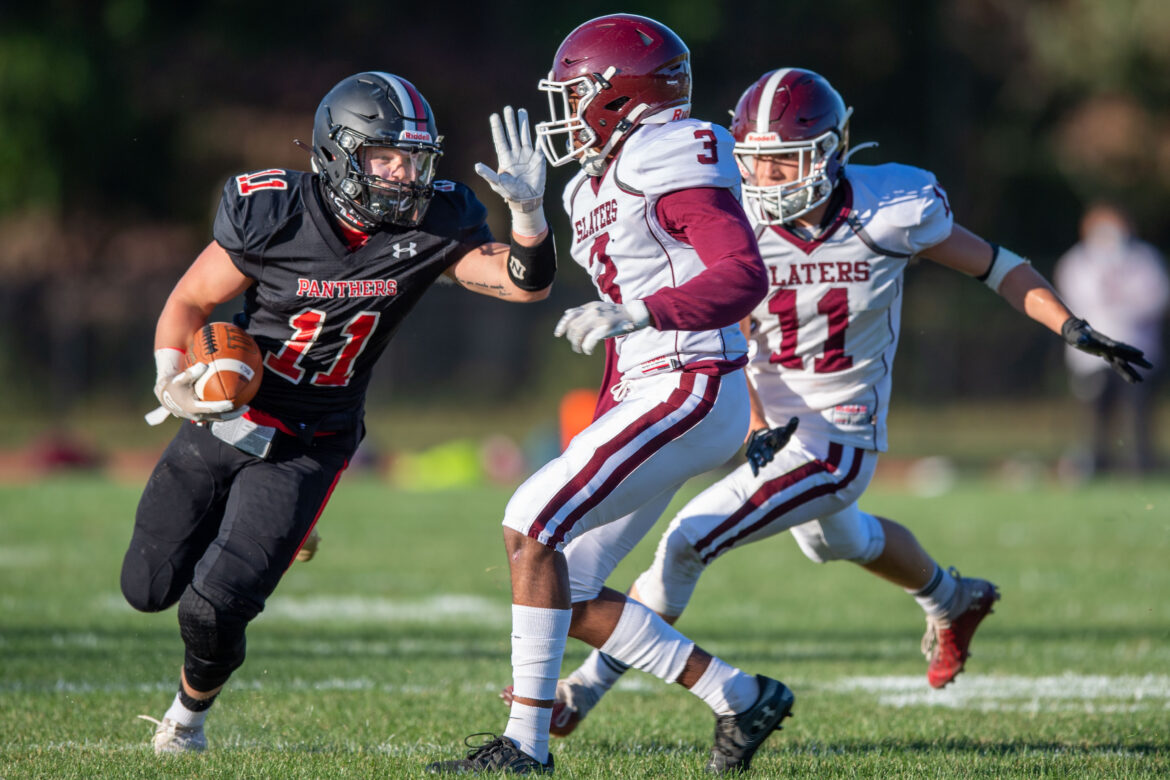 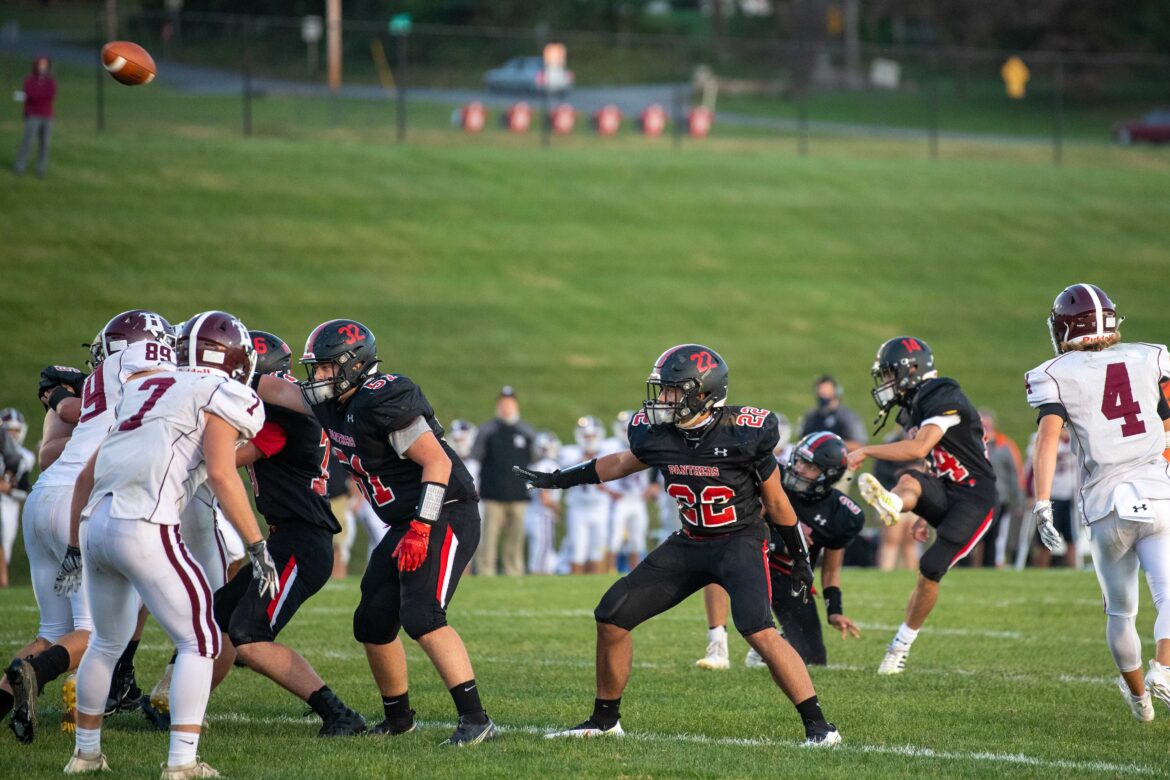 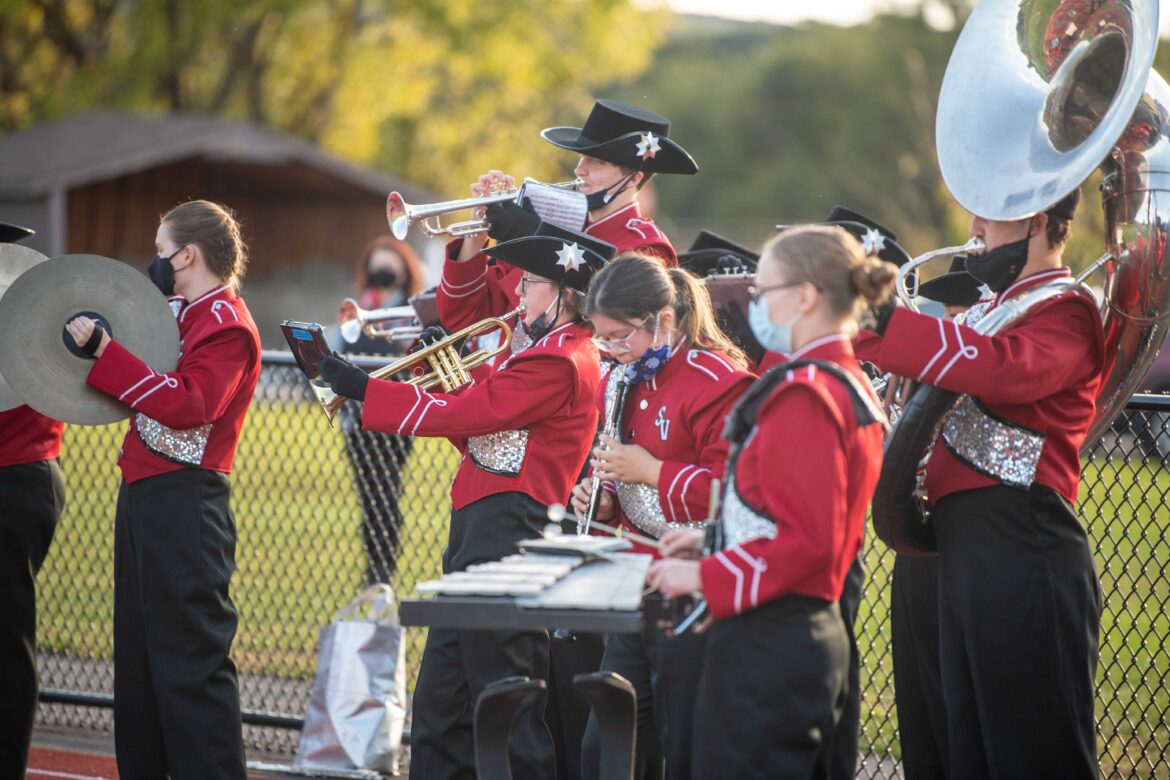 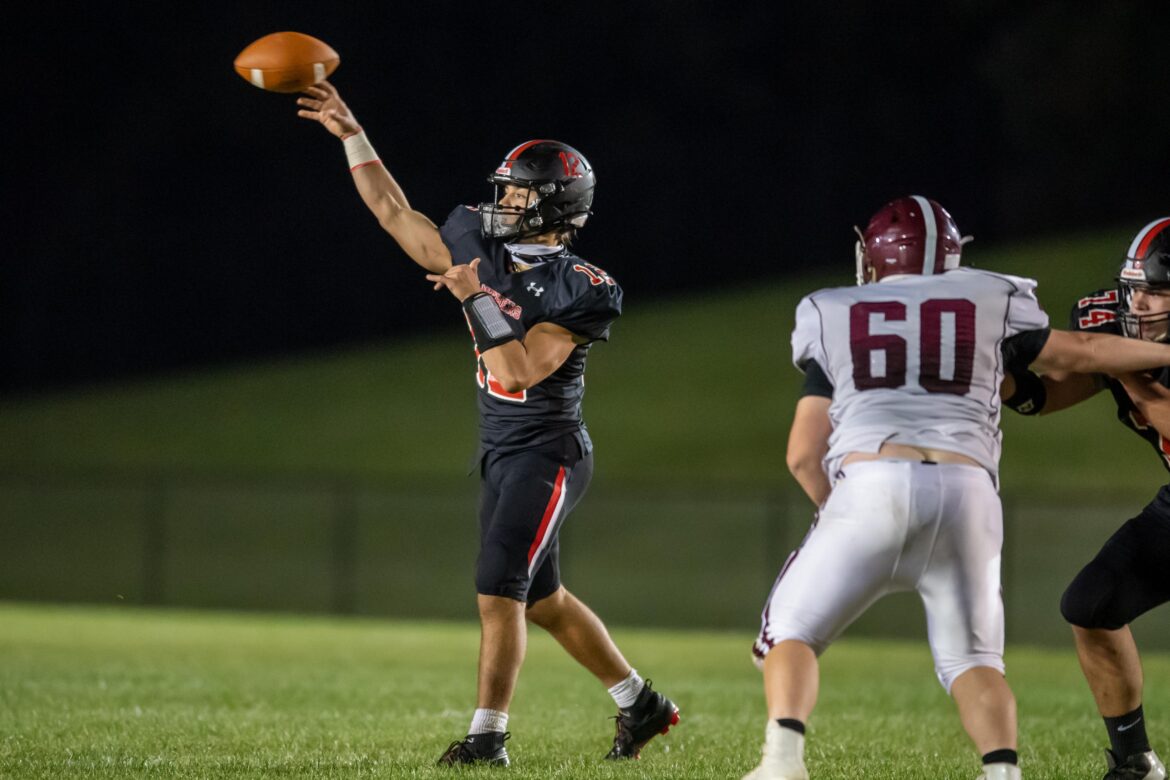 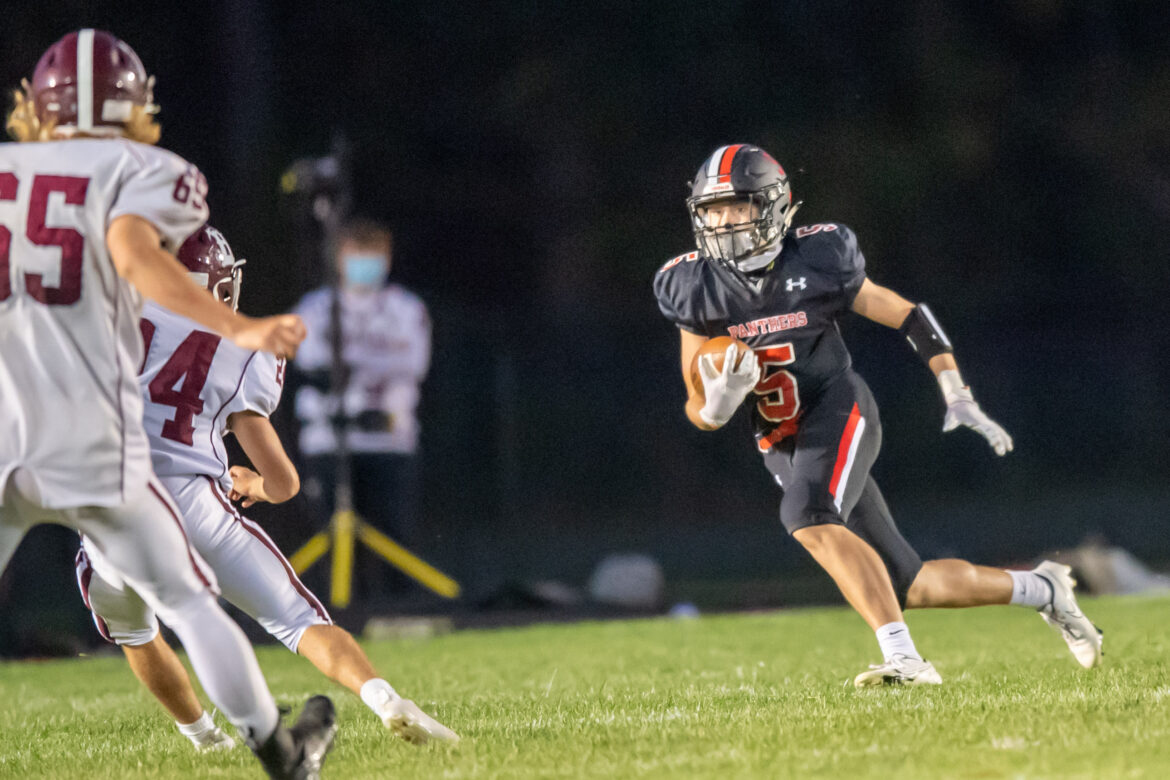 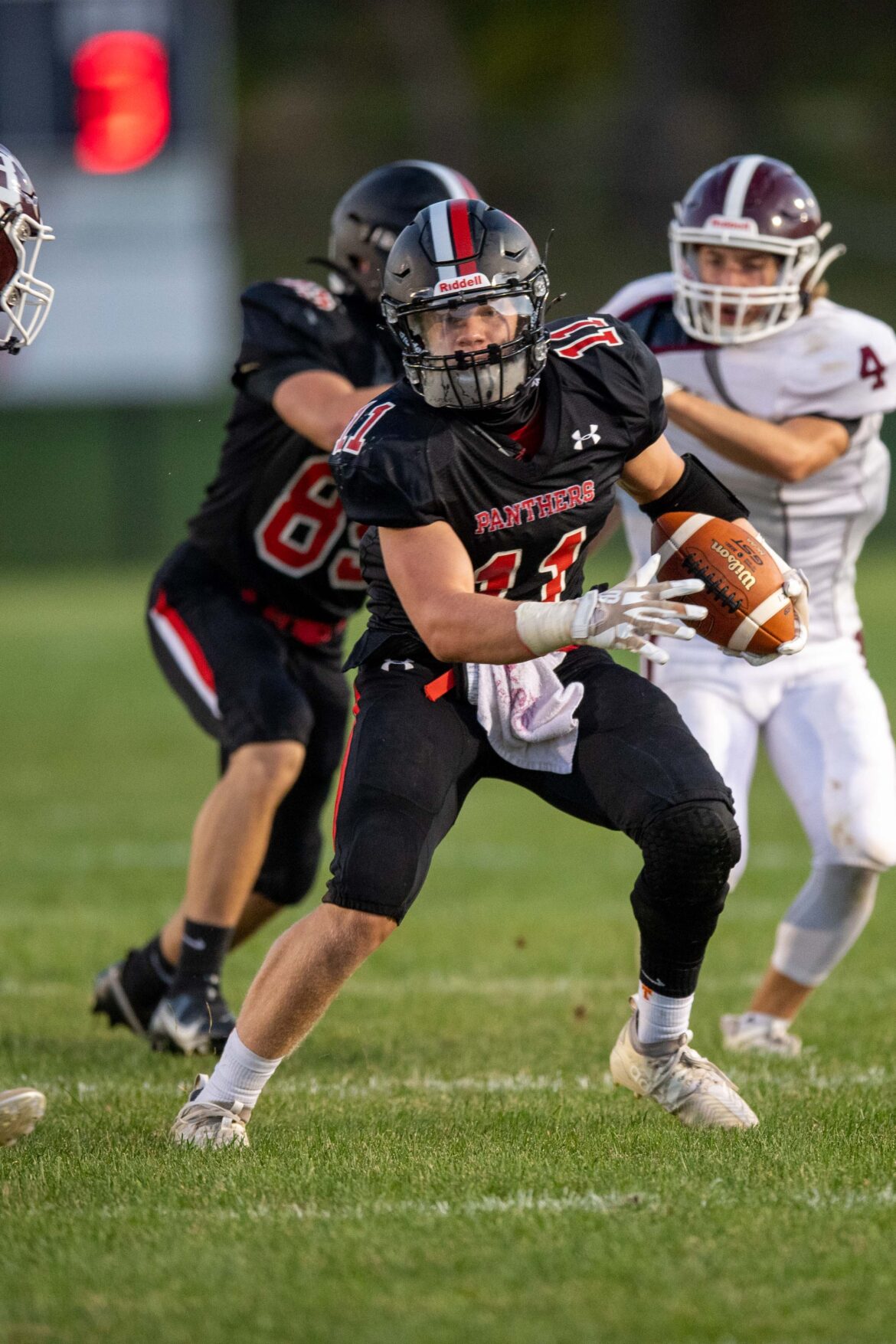 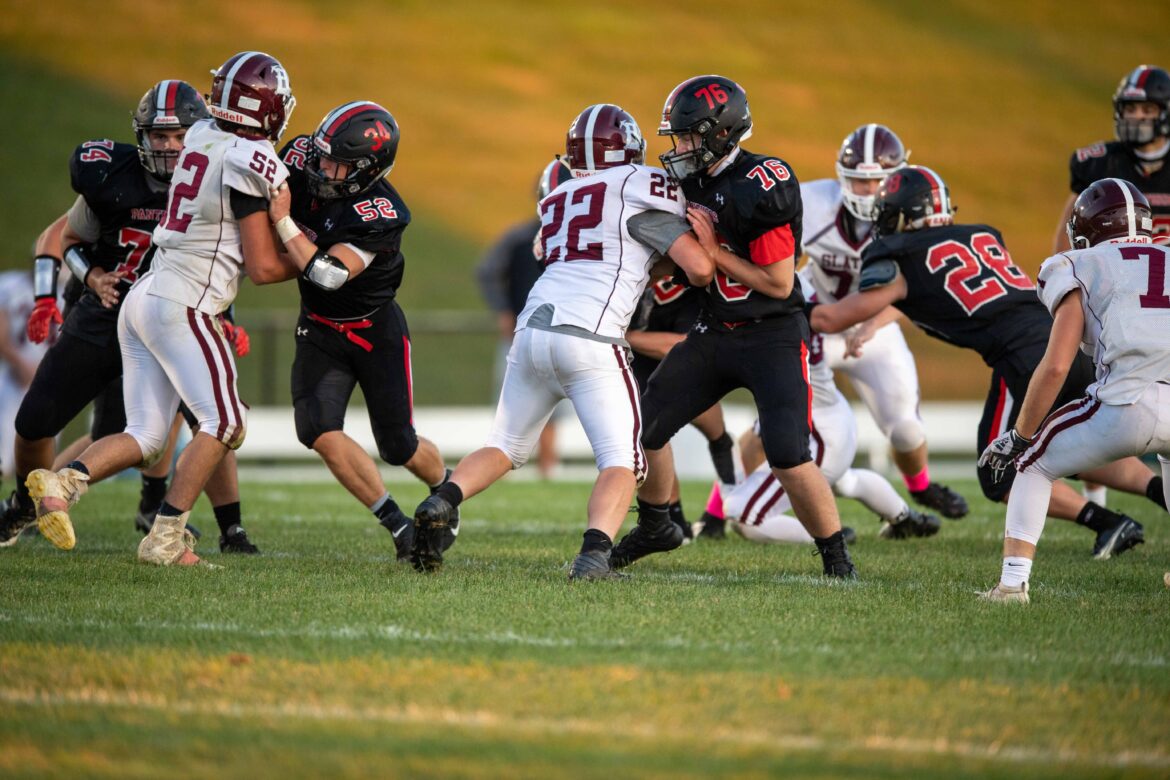 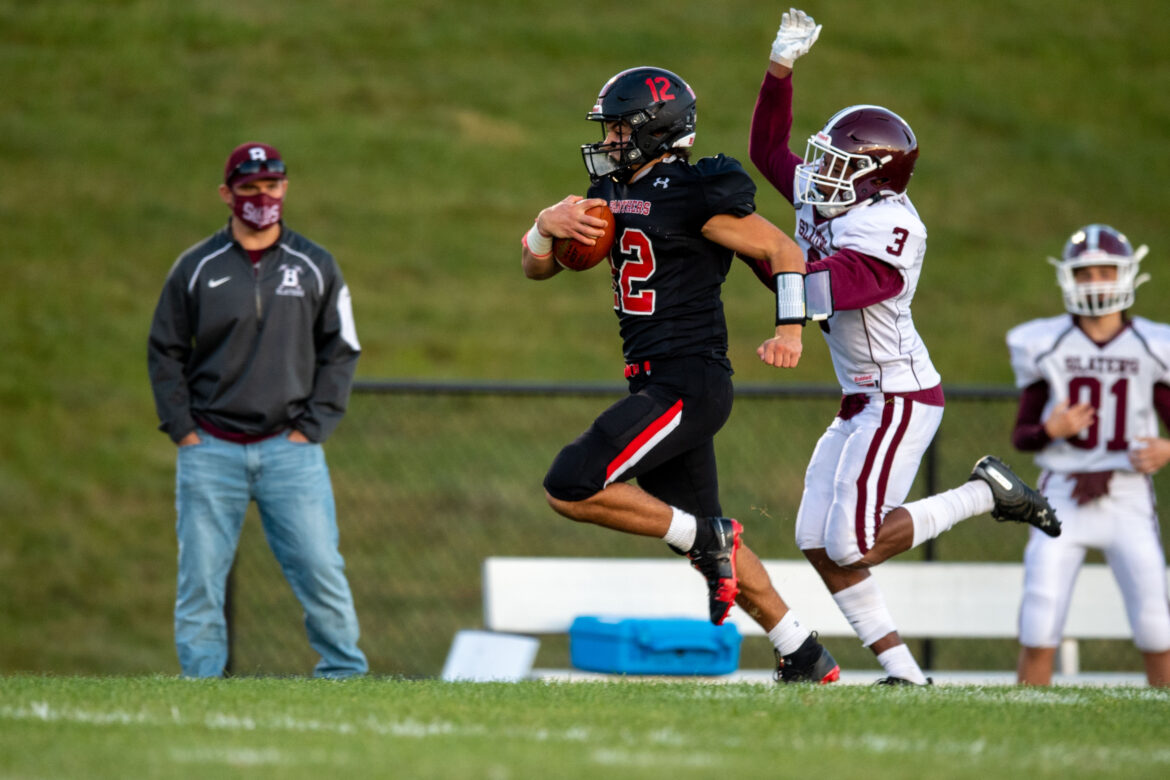 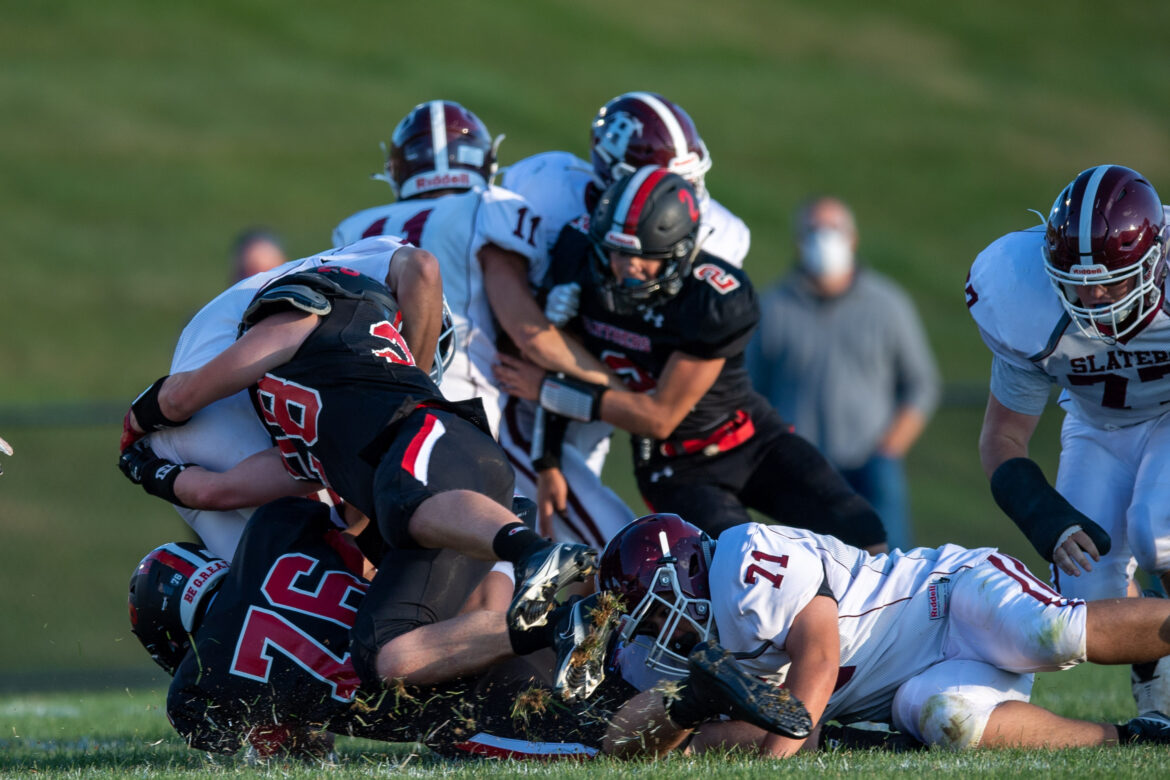 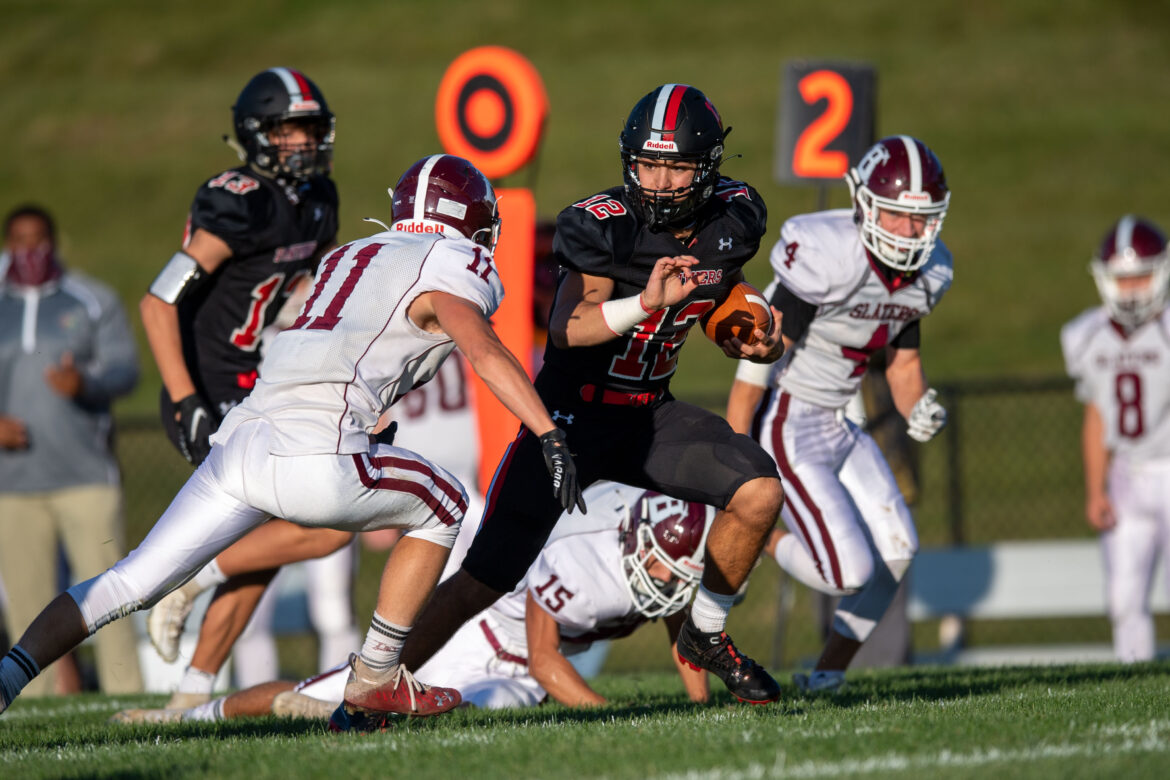 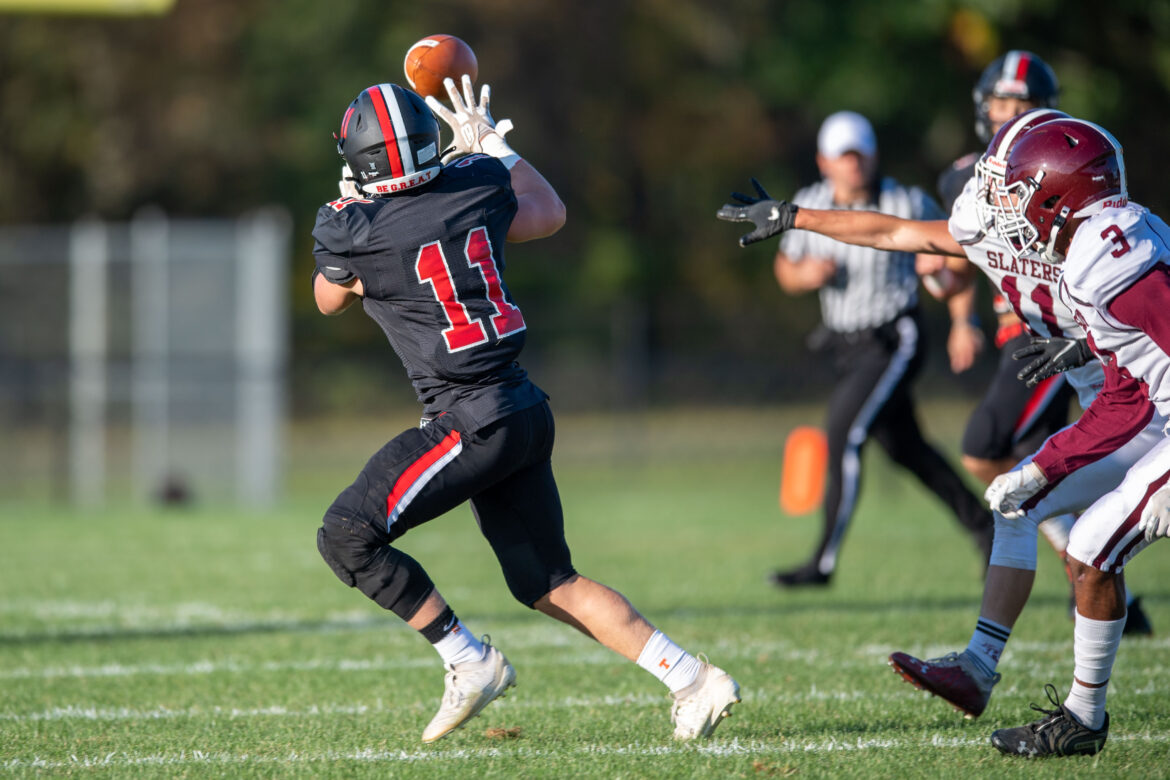