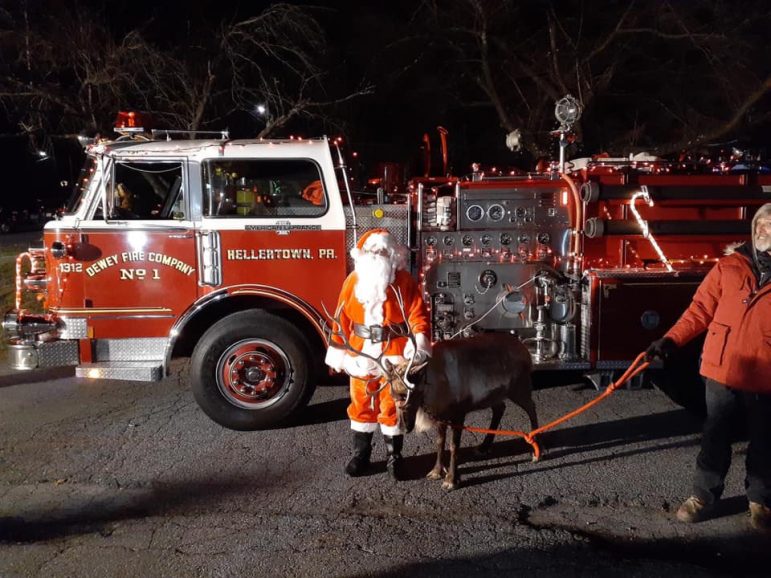 Santa will be travelling through the streets of Hellertown on a vintage Dewey Fire Company antique truck on Sunday, Dec. 20. The Hellertown visit is just one of Santa’s scheduled trips to the Saucon Valley area during the next month.

Santa Claus is gearing up to visit neighborhood streets over the next few weeks. While the COVID pandemic won’t keep Santa in the North Pole this December, it will alter how local Santa runs will operate.

The Fountain Hill Fire Department will host their Operation Santa event on Saturday, Dec. 19 from approximately noon to 4 p.m. Santa will be joined by Mrs. Claus and their helpers as they travel the borough’s streets delivering presents to the children of Fountain Hill.

Santa usually goes into homes to deliver presents, however Fire Chief Derek Richmond said Santa will be staying outside this year “to keep things open air and enforce some social distancing.”

“We’re asking that parents listen for the sirens and the Christmas music coming up the way, and come outside and meet us with the kids,” Richmond said.

Richmond also said that Santa, Mrs. Claus, their elves and others involved in the operation will be wearing masks. Residents participating in the event are encouraged to wear masks as well.

Parents may drop off a wrapped gift for Santa to deliver at the fire station located on Cherokee Street opposite Borough Hall. The deadline to drop off gifts is Dec. 18.

The full list of drop-off dates and times can be found on the event’s Facebook page, although Richmond said residents can call the fire department if they need to arrange a drop-off outside of the scheduled times.

The fire department asks that parents bring individually-wrapped gifts with their child’s name, address and phone number attached to them.

Richmond also said that the fire department plans on continuing its relationship with St. Luke’s Hospital and donating small toys to its pediatric unit as it has done in years past.

“Obviously, we want to do what we can for the kids who are in the hospital,” he said.

More details related to the pediatric unit donation will be coming soon, according to Richmond.

Dewey Fire Company No. 1 in Hellertown will be holding their annual Santa Run on Sunday, Dec. 20, beginning at 12 p.m. as part of something new: a coordinated Santa Run by three different fire companies throughout the entire Hellertown-Lower Saucon area.

According to a Facebook event hosted by Lower Saucon Fire Rescue and the Hellertown-Lower Saucon Chamber of Commerce, Santa will be taken through the Leithsville, Southeastern and Se-Wy-Co territories of Lower Saucon Township by LSFR. Steel City Volunteer Fire Co. will be Santa’s escort in the township’s Steel City section.

In Hellertown, Santa will not be handing out gifts and candy canes this year, however you can still find him parading the streets on an antique truck Dewey Fire Co. truck. He will even be joined by DJ Reilly, who will be playing Christmas music through the borough.

Santa Claus is coming to town.... Sunday, December 20th, beginning at noon! We will be doing our annual Santa Run this...

Dewey Fire Company’s Facebook page will provide updated information about the event and track Santa’s location during the Santa Run.

Santa will travel to Upper Saucon Township on Saturday, Dec. 19 from 11 a.m. to 7 p.m. To help maintain health and safety, the fire department has added pre-planned stop locations along Santa’s route in an effort to spread out crowds in large neighborhoods.

The Upper Saucon Volunteer Fire Department has provided a list of approximate Santa stop locations and times on their Facebook page.

Santa will remain on the fire truck during visits to Upper Saucon Township in order to practice social distancing within the community. However, the department will provide opportunities for pictures next to the fire truck for those interested.

“We do ask that 6-foot social distancing guidelines are followed, and that masks be worn at all stop locations where crowds exist,” the fire department said on Facebook.

The Coopersburg Fire Company will escort Santa through Coopersburg on Sunday, Dec. 20 beginning at 11 a.m. Look to their Facebook page for updated information about the event.

Lower Milford’s next Santa Run will take place on Sunday, Dec. 13 from 1 p.m. until dark.

Santa will not be handing out candy canes this year, but socially-distanced picture opportunities will be made available.

“When waiting to see Santa at a stop location, please practice 6-foot social distancing and wear a mask for the safety of your neighbors and Santa!” the Lower Milford Fire Company said on Facebook.