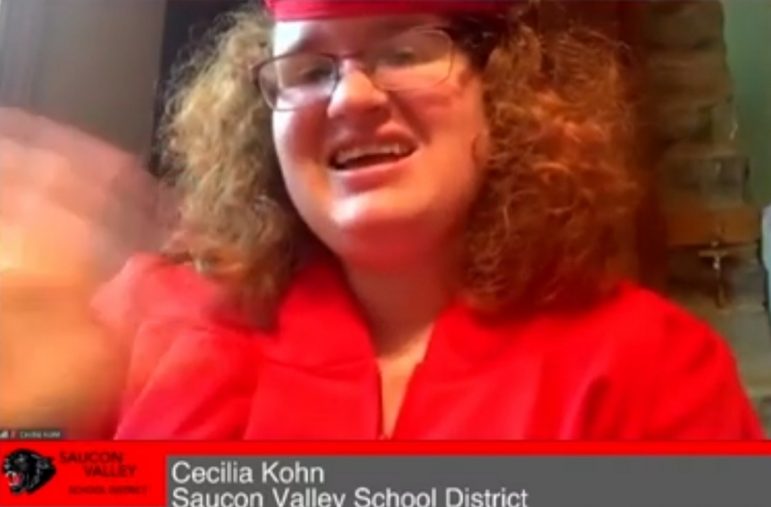 Cecilia Kohn is a 2021 Saucon Valley graduate of Colonial Intermediate Unit 20. The school’s virtual graduation ceremony was held May 27. Kohn’s IU 20 teacher, Kelsey McLaughlin, spoke of her student’s love of bowling and affection for horses.

Two special Saucon Valley students graduated through Colonial Intermediate Unit 20 in an hour-long virtual ceremony May 27. The ceremony began with a photo montage presentation of all of the IU 20 graduates, set to the tune of “Pomp and Circumstance.”

In his opening remarks, IU 20 Director Dr. Christopher Wolfel spoke of the connections between school districts and the Intermediate Unit, which provides services to students from 13 districts and three career and technical centers across a three-county area. He thanked the teachers and families for their commitment to the graduates’ education.

Guest speaker Jonathan Wolfel, a U.S. Army veteran and Christopher Wolfel’s father, reminded the members of this year’s class that they reached graduation because of their own perseverance and exhorted them to “never stop learning.”

“Most important, remember, it was your hard work that got you here,” said Jonathan Wolfel, “and for that reason, I am honored to be here with you this evening.”

Along with Class of 2021 Speaker Nick Dorion, Jonathan Wolfel led virtual attendees in a recitation of the Pledge of Allegiance. 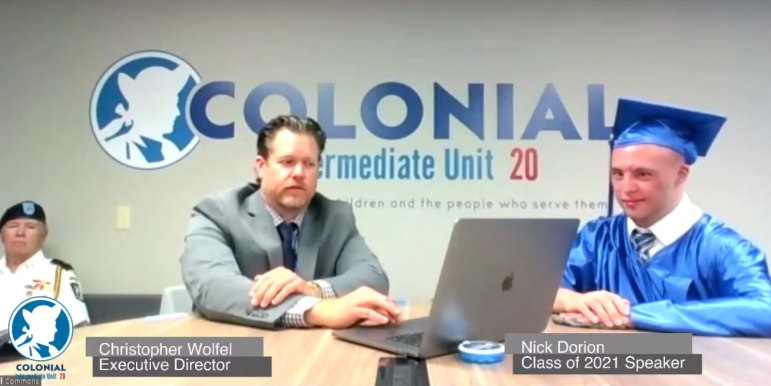 Colonial IU 20 Director Executive Director Christopher Wolfel speaks during the 2021 commencement ceremony the IU held virtually on May 27. At left is his father, U.S. Army veteran Jonathan Wolfel, who was the guest speaker for the event. To his right is Nick Dorion, the IU 20 Class of 2021 Speaker.

While some students received their diplomas during the ceremony, Director Wolfel said others were delivered in person to students.

He and Dorion hand-delivered them, arriving at students’ homes in an IU 20 school bus.

Dorion thanked his teachers for everything he learned and his family for all they taught him.

“I want to thank you for teaching me everything I should know for the future,” he said.

Dorion concluded his remarks by congratulating the class of 2021, who were then recognized individually by their teachers, with district representatives also in attendance.

“He was a breath of fresh air to have in my classroom,” Kutzler said. “He will always be remembered for his love of the American flag and his noble way of reciting the Pledge of Allegiance.”

Kutzler also spoke of Alex’s special love of clocks during the graduation ceremony.

Alex wore a red white and blue lei over his gown and waved an American flag as his teacher spoke of his patriotism.

McLaughlin said her former pupil was “an absolute joy to have in my classroom for the past for years.”

McLaughlin spoke of Cecelia’s dual love of horses and bowling. Cecelia smiled throughout the presentation.

A recording of the entire graduation ceremony may be viewed on YouTube.

Created half a century ago by the Pennsylvania General Assembly, the state’s system of 29 intermediate units provides services to children–many of whom have special needs–in an efficient manner that prioritizes the delivery of educational programs across multiple school districts.

On behalf of Saucon Source, congratulations to Cecilia, Alexander and all of the 2021 Colonial Intermediate Unit 20 graduates. 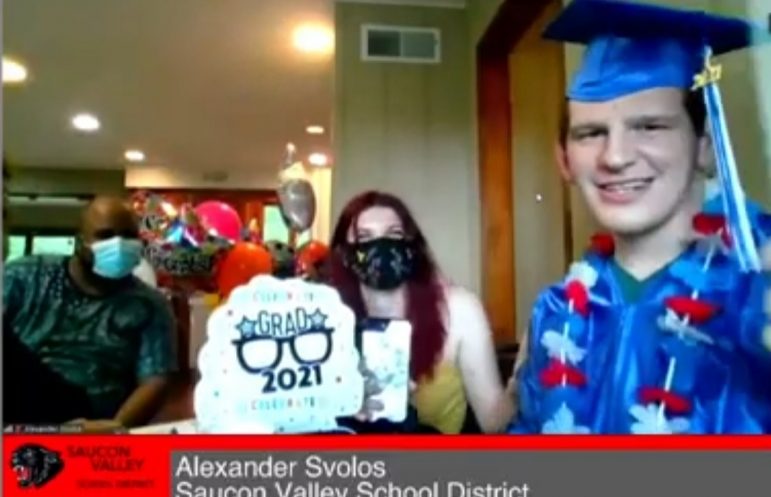 Alexander “Alex” Svolos is a 2021 Saucon Valley graduate of Colonial Intermediate Unit 20 who attended Colonial Academy. The IU 20 virtual graduation ceremony was held May 27. Svolos’s teacher at IU 20 was Meghan Kutzler, who spoke of his love of clocks.