A man and woman from different corners of eastern Pennsylvania are accused of breaking into a garage in Hellertown borough as well as committing other offenses late last week.

According to a police department news release issued Monday, officers responded to a report of a garage break-in in the 1300 block of First Avenue shortly after 10 a.m. Friday. 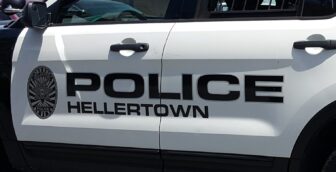 Police said that by the time officers arrived, the suspects had left the scene.

A short time later, they said they were located in the 1000 block of Main Street and identified as 35-year-old Tiffany Nicole Diehl of the 300 block of Chestnut Avenue, Kingston, Luzerne County, and 29-year-old Shawn Michael Melleski of the 2900 block of Lansdown Avenue, Bristol, Bucks County.

Both Diehl and Melleski are facing two counts each of Felony 3 criminal trespassing in connection with the alleged garage break-in, according to court records.

Following a preliminary arraignment before District Judge Alan Mege Friday afternoon, both Melleski and Diehl were committed to Northampton County Prison in lieu of $25,000 straight bail, according to the criminal court dockets filed in each of their cases.

The court dockets do not list attorneys for either Diehl or Melleski.

Court records show that both Diehl and Melleski are facing other charges in the borough.

Melleski was also arrested in Hellertown on July 8 and is charged in that case with DUI, possession of a controlled substance and possession of drug paraphernalia–all of which are misdemeanors–along with the summary offenses of driving on a suspended license, driving without insurance and a vehicle lighting violation, according to a court docket.

Melleski and Diehl were scheduled to appear before Judge Alan Mege Monday at 3 p.m. for a preliminary hearing on the charges filed by police in the alleged July 8 incident.

Their preliminary hearing on the charges related to the alleged garage break-in is scheduled to be held before Judge Mege in Northampton County District Court 03-2-04 in Lower Saucon Township on Tuesday, July 27 at 9 a.m., according to court records.

Note: All individuals charged with a crime are presumed innocent until proven guilty in a court of law. This story was compiled using information from the Hellertown Borough Police Department and Northampton County court records.