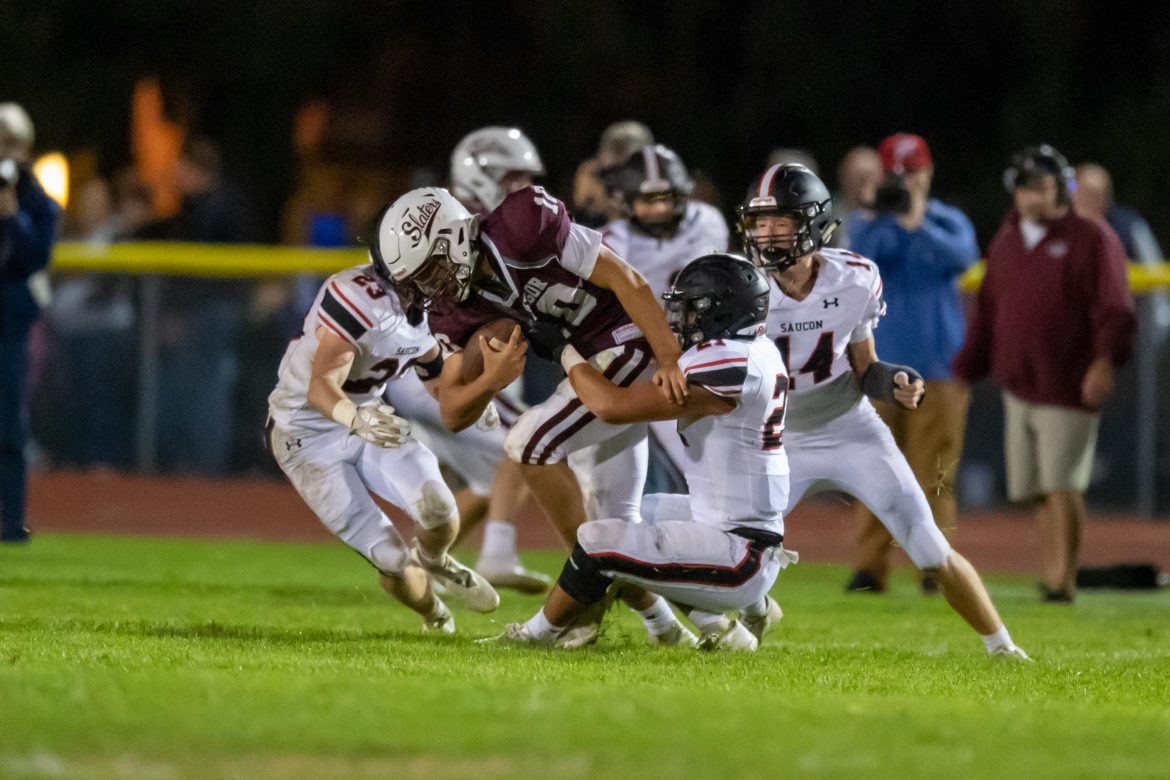 The Saucon Valley defense swarmed and rallied to the ball all night against the Bangor Slaters.

On Friday night it was “Senior-Night” in the Slate Belt.  Bangor Football honored their upper classmen and the Saucon Valley Panthers were scheduled to join the festivities.  The Panthers loaded the bus looking to build upon on their 2-3 record.  Saucon was looking forward to following up last week’s success against Blue Mountain and get another tally in the win column,  The Slaters were hoping squash Saucon postseason hopes and improve to a 4-2 record.  This matchup created an intense night of high school football. 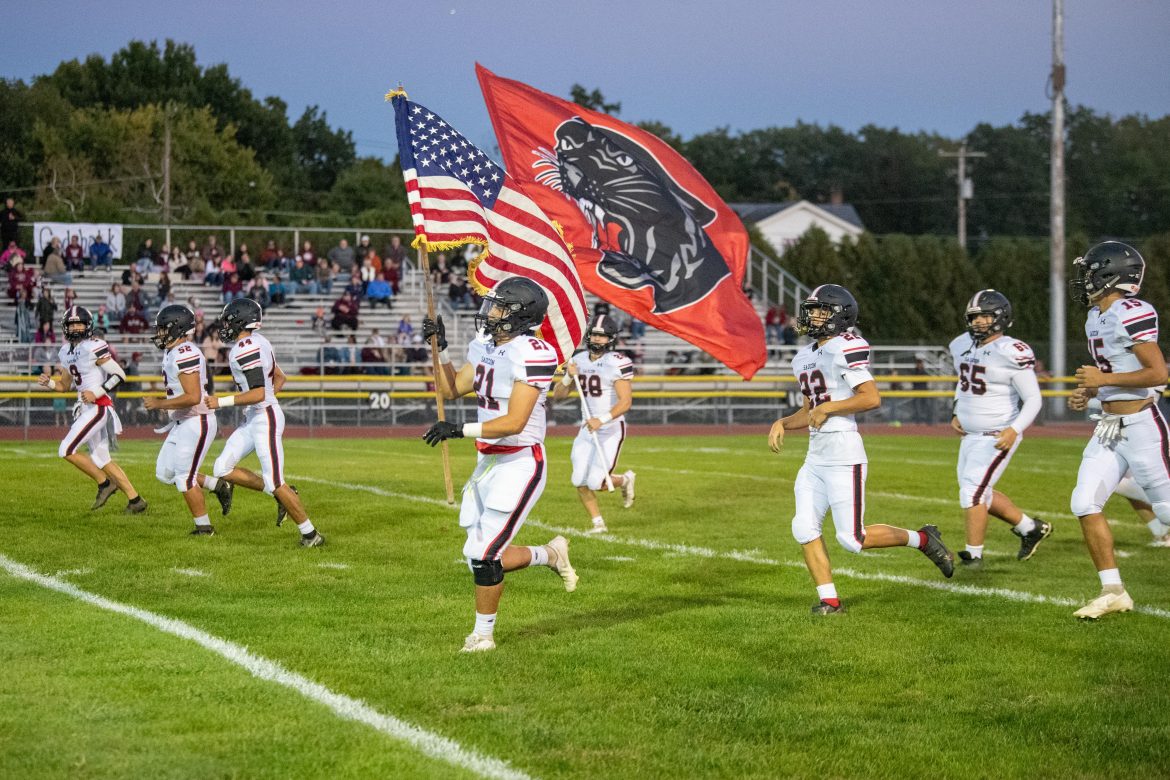 The Panthers were fired up for their big matchup with the Bangor Slaters.

It did not take long for the scoring to heat up.  On their opening series, Saucon Valley faced a 3rd & 2 situation from their own 39-yardline.  The Panthers dialed up a QB sneak that surprisingly popped the Slater defense and resulted in a Dante Mahaffey 61-yard sprint for a score.  Jacob Christopher made good on his first extra-point of the night and Saucon jumped out to a 7-0 lead only one minute and five seconds into the ballgame.

Eight plays later the Slaters answered with a quarterback sneak of their own.  After marching his team sixty-four yards, Eric Striba earned a 1-yard touchdown run for the Slaters.  Bangor’s PAT was blocked by Saucon Valley freshman Jared Rohn and with 7:03 remaining in the opening quarter, the Panthers held a 7-6 lead. 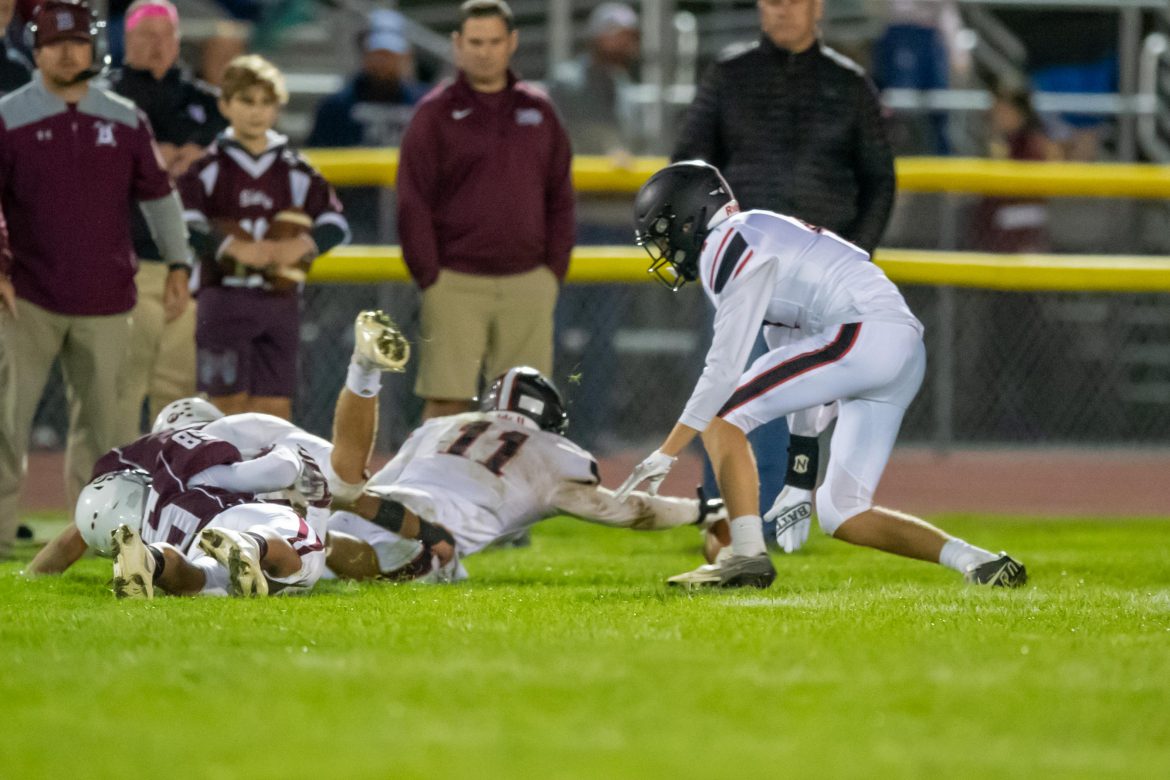 Saucon Valley’s Ty Csencsits reaching out for extra yardage against the Bangor Slaters.

On the Panthers next possession it took four passes and a run to get Saucon back into the endzone.  The final pass was a 25-yard touchdown from senior Dante Mahaffey to classmate Ty Csencsits.  The point-after was successful and Saucon Valley led 14-6 with a little over five minutes left to play in the first quarter.

As a good old-fashioned shoot seemed to be developing, Bangor used seven offensive plays to get back onto the scoreboard and match Saucon’s red hot start.  Including their successful two-point try, the Slaters tied the game with three minutes left in the first period, 14-14.

On the very next possession Saucon’s hot start cooled off quickly.  The Slaters quickly forced a punting situation.  Panther punter Alex Magnotta hit a dandy to pin the Slaters down at their own 1-yardline. 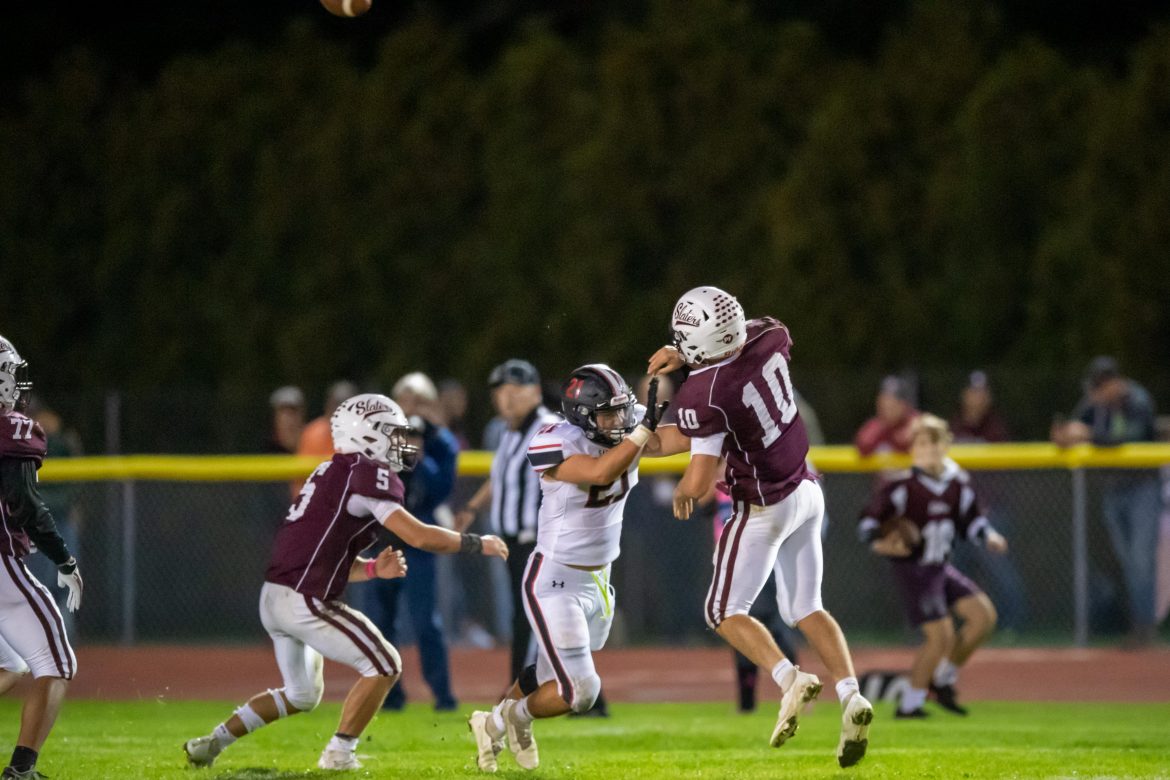 Seemingly unfazed by the field position dilemma the Slaters went about their business and embarked on a fifteen play, ninety-nine yard journey for another score.  The highlight of the drive was converting a 3rd & 15 situation with a pass down to the Panther 24-yardline.  From there it was more ground-and-pound for pay dirt.  Bangor was again successful with a two-point PAT and jumped in front of the Panthers 22-14.

After the Slater score, Saucon Valley regained possession with a little over three minutes until halftime.  However, they were forced to punt after only three plays.  Bangor smelled a little Panther blood and went after it.  After utilizing all of their timeouts, the Slaters found themselves 1st & Goal a the Panther 5-yardline with :27 seconds remaining until halftime.  Any hometown crowd hopes of extending the lead were snuffed out when Saucon Valley defensive back, Anthony Orlemann, intercepted signal-caller Striba’s pass in the back of the endzone.  The teams hit intermission with Bangor ahead 22-14. 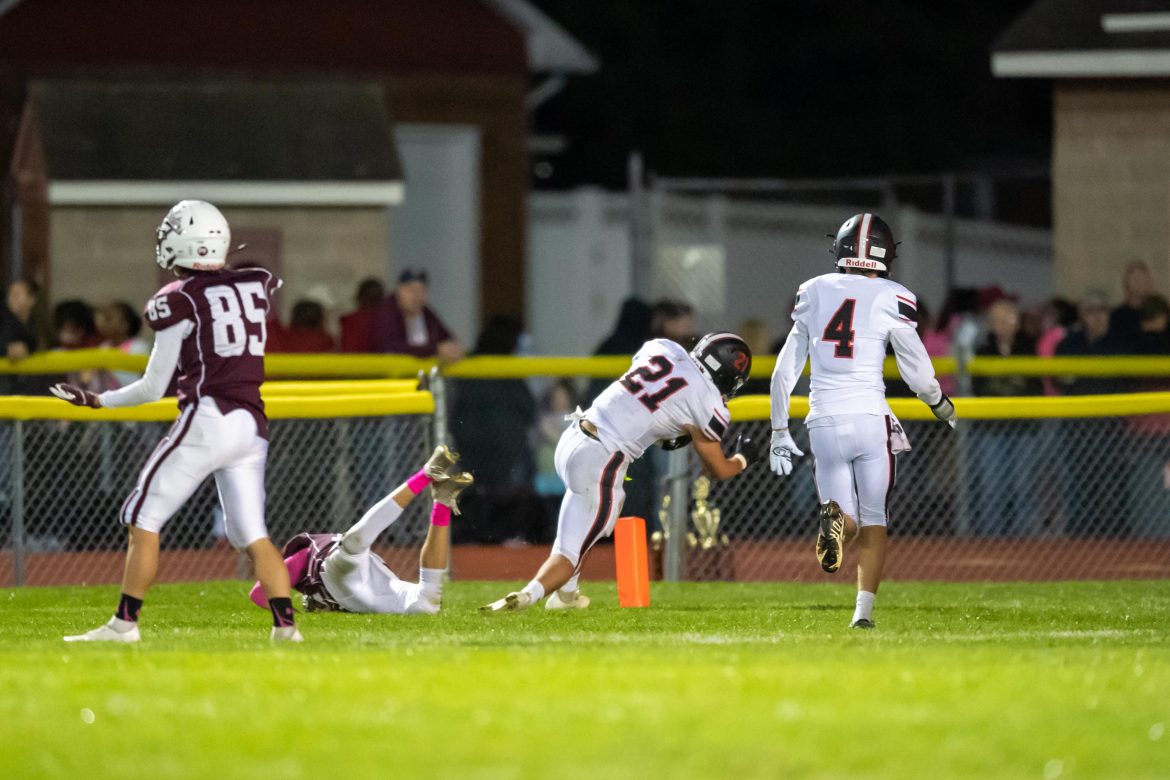 For as much as the second quarter belonged to the Bangor Slaters, the second half was all Saucon Valley.  The Panther defense started the third period by forcing the Slaters into a three-and-out punt.  Saucon went “Beast Mode” and pounded the Bangor defense with six runs and a pass.  On the seventh play of the drive Panther running-back, Damian Garcia, took Mahaffey’s handoff and was stonewalled up the middle.  Garcia, however, was able to bounce his run outside and around the left end to score from 18-yards away.  Saucon went for two-points on their PAT and was successful when Mahaffey hooked up with sophomore Braden Weiss for the short-pass conversion.  About halfway into the third quarter the Panthers tied things, 22-22. 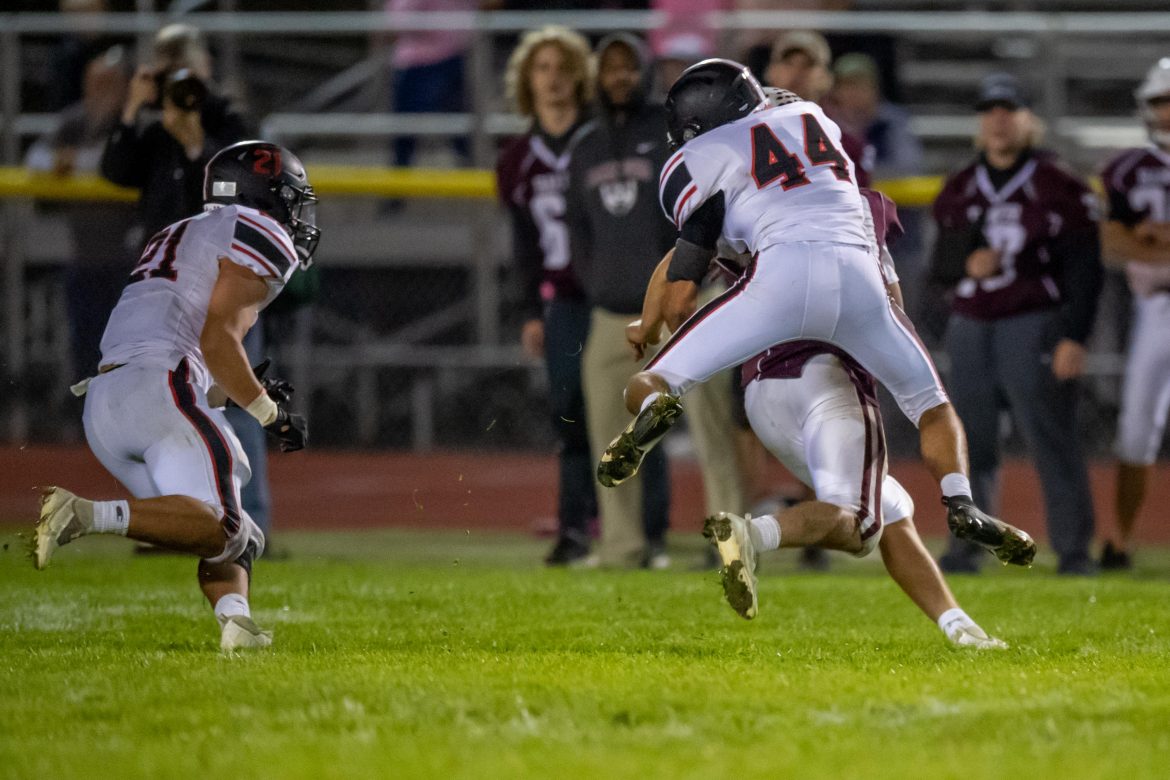 On Bangor’s next possession the stingy Panther defense bent a little but did not break.  Bangor was forced into a 4th & 4 punting situation from midfield.  The Slaters tried a little trickery that backfired.  Their fake-punt-shovel-pass went nowhere as the Saucon defense was not fooled. The Panther offense welcomed the stop and went back to work.

Saucon Valley’s offense rewarded the defense for a job well done by manufacturing another scoring drive.  With “Dual-Threat” Dante Mahaffey as the featured workhorse, the Panthers got back into the endzone after a time-consuming, sixteen play drive.  Mahaffey finished the sequence with a 1-yard QB sneak for the touchdown.  After Jacob Christopher’s extra-point, the Panthers reclaimed the lead 29-22 with five minutes left to play. 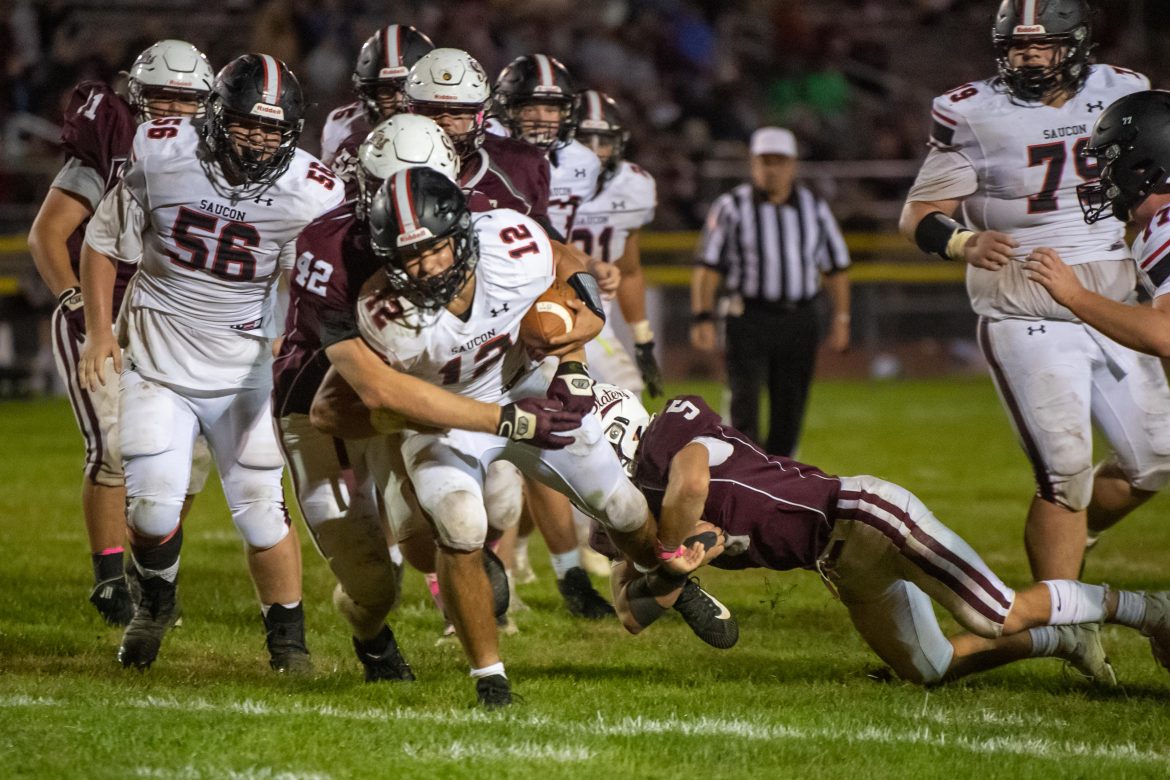 ‘Dual-Threat’ Dante Mahaffey making another play for the Panthers.

The Bangor offense bled the clock as they grinded their way to the Panther 40-yardline.  But, with a little under two minutes left to play, Saucon Valley’s Ty Csencsits stepped in front of a Striba pass and secured an interception.  From his outside linebacker position, Csencsits returned the pick to midfield.

The Panther offense pounded the ball for two short gains to keep the clock moving and force Bangor to utilize their timeouts.  On 3rd & 6, Saucon called on Mahaffey to try and find a little daylight and secure a game-ending first down. Mahaffey delivered and then some.  Following a little inside run fake to Garcia, Mahaffey kept around left end and raced 47-yards to cross the Slater goalline.  Mahaffey’s score and Christopher’s extra-point put the Panthers up 36-22.  For good measure Panther freshman, Jack Robertson picked off Striba to bring the game to a close.  With the win Saucon Valley improved to 3-3, Bangor fell to 3-3. 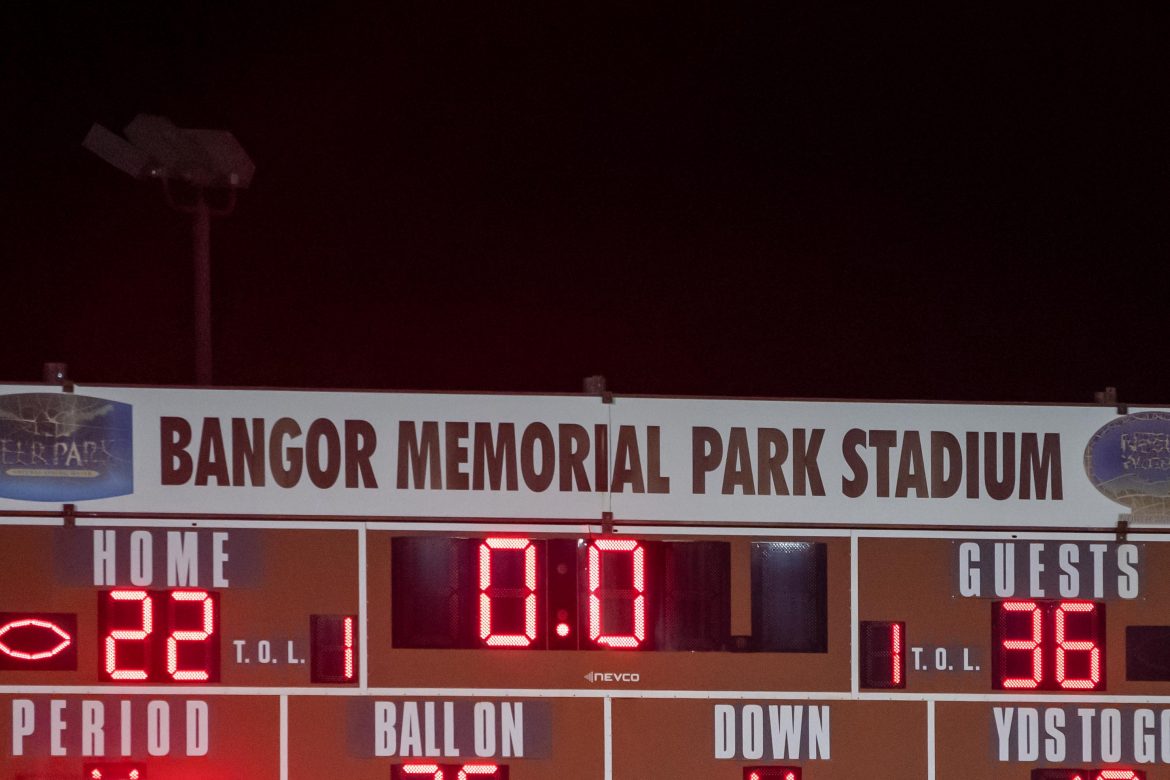 UP NEXT:  The Panthers (3-3) return to Hellertown for a HOMECOMING!, Friday night football fight against crosstown foe, Southern Lehigh (0-6).  Kickoff for this Saucon Creek rivalry is scheduled for 7 p.m. 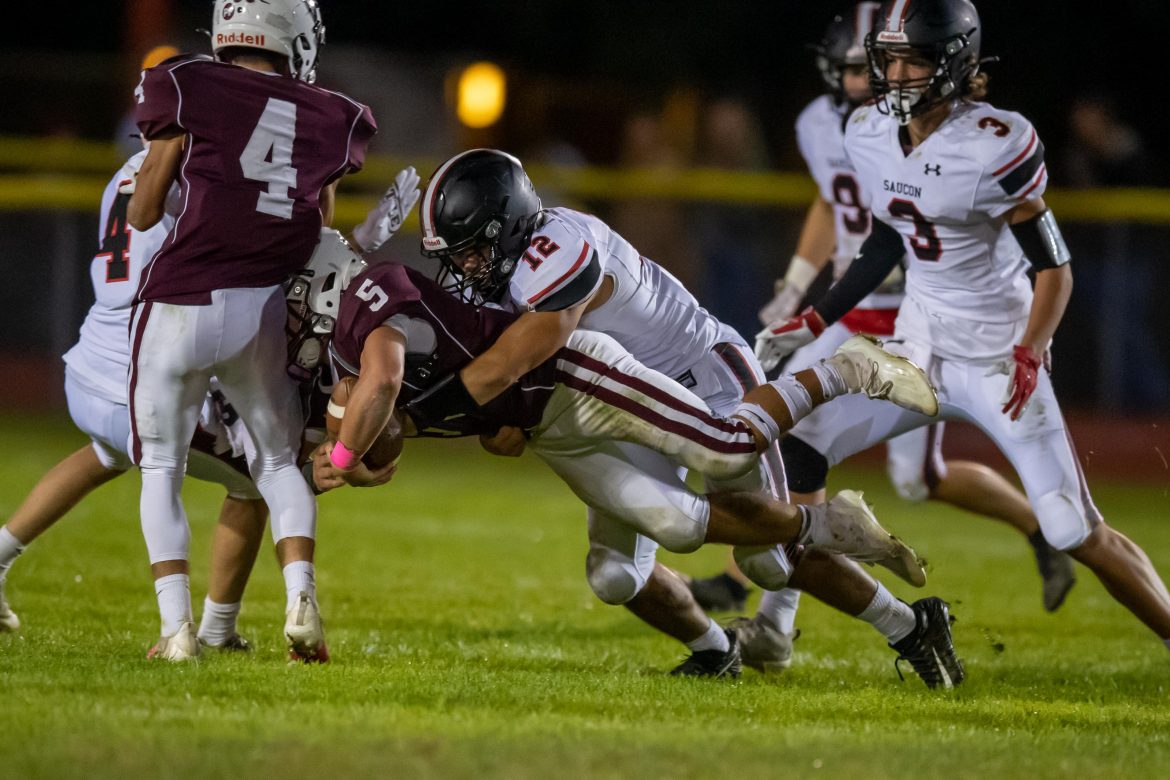 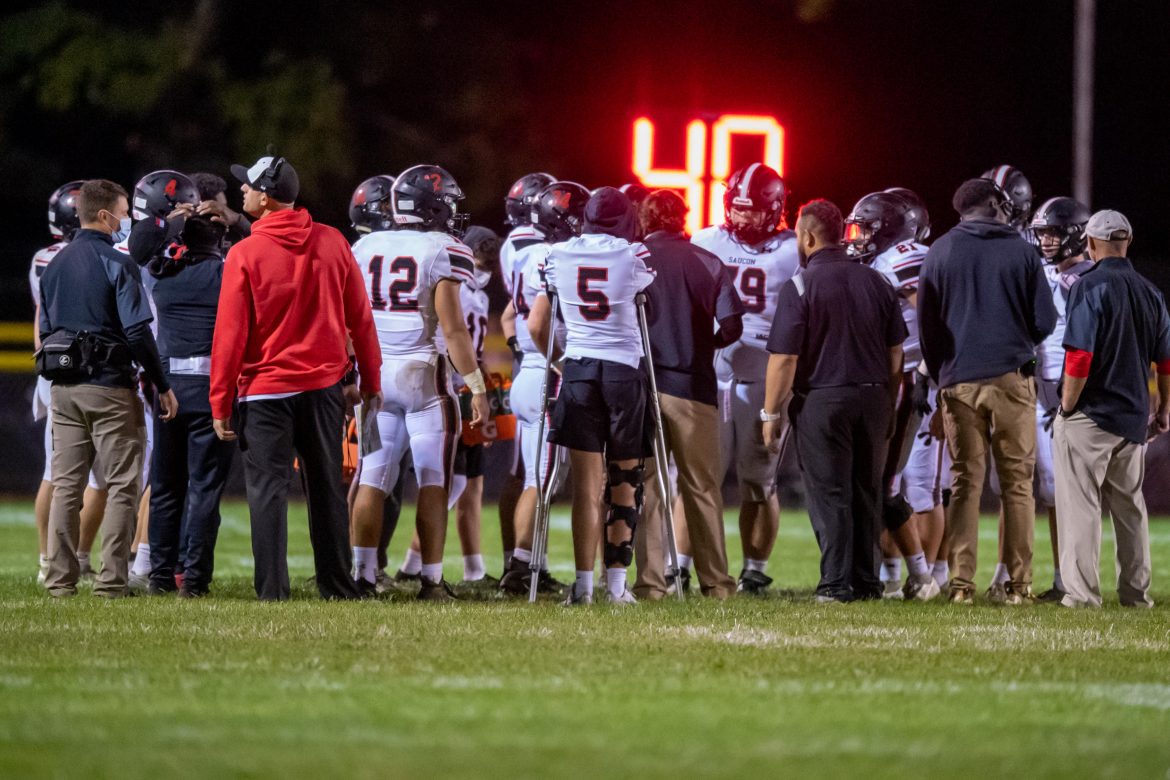 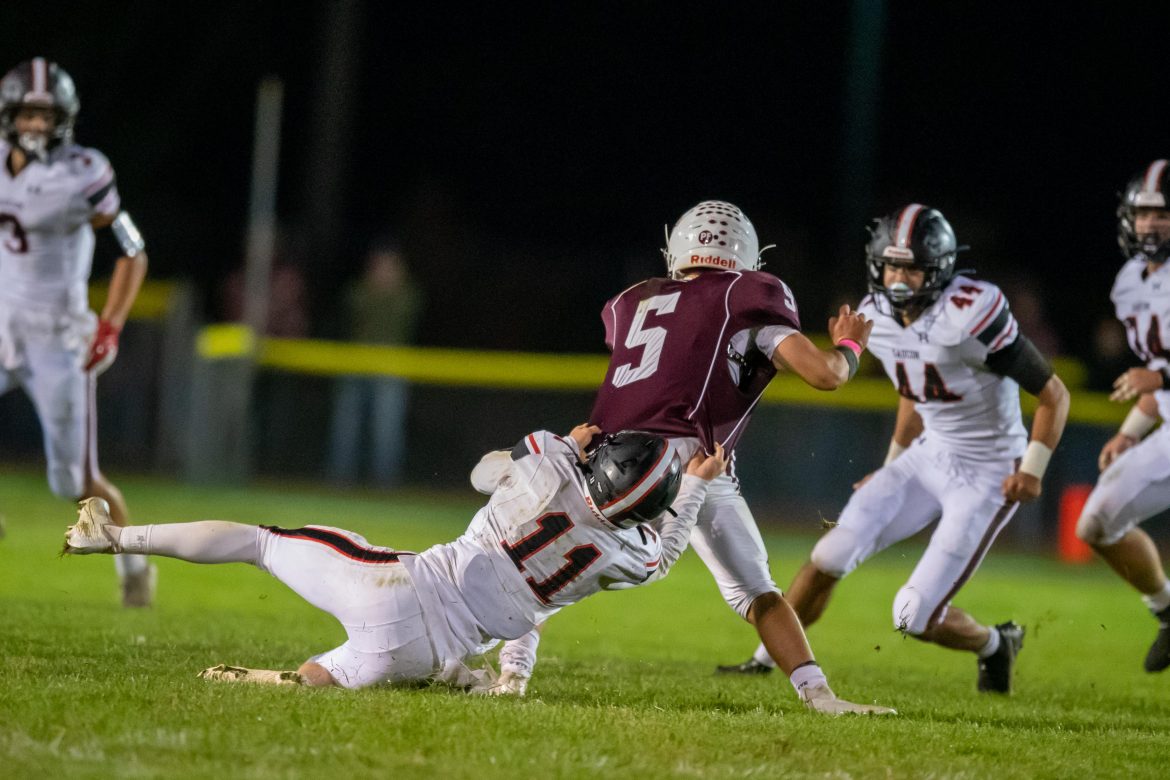 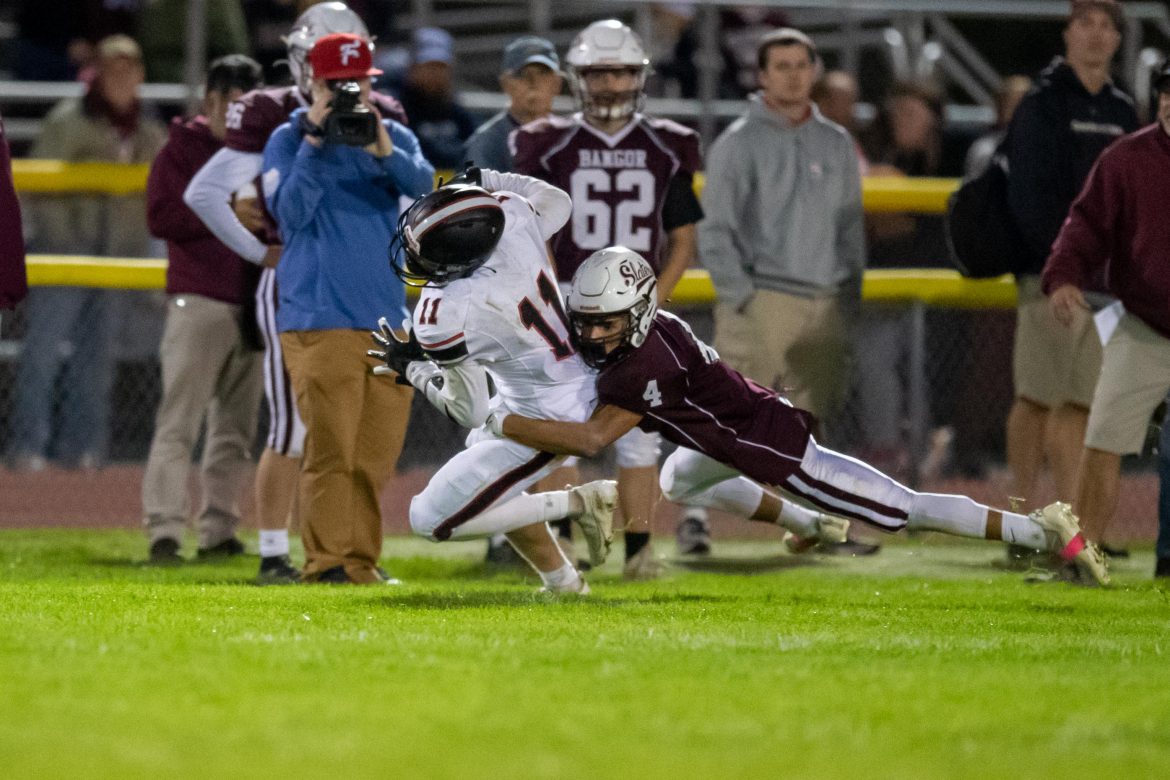 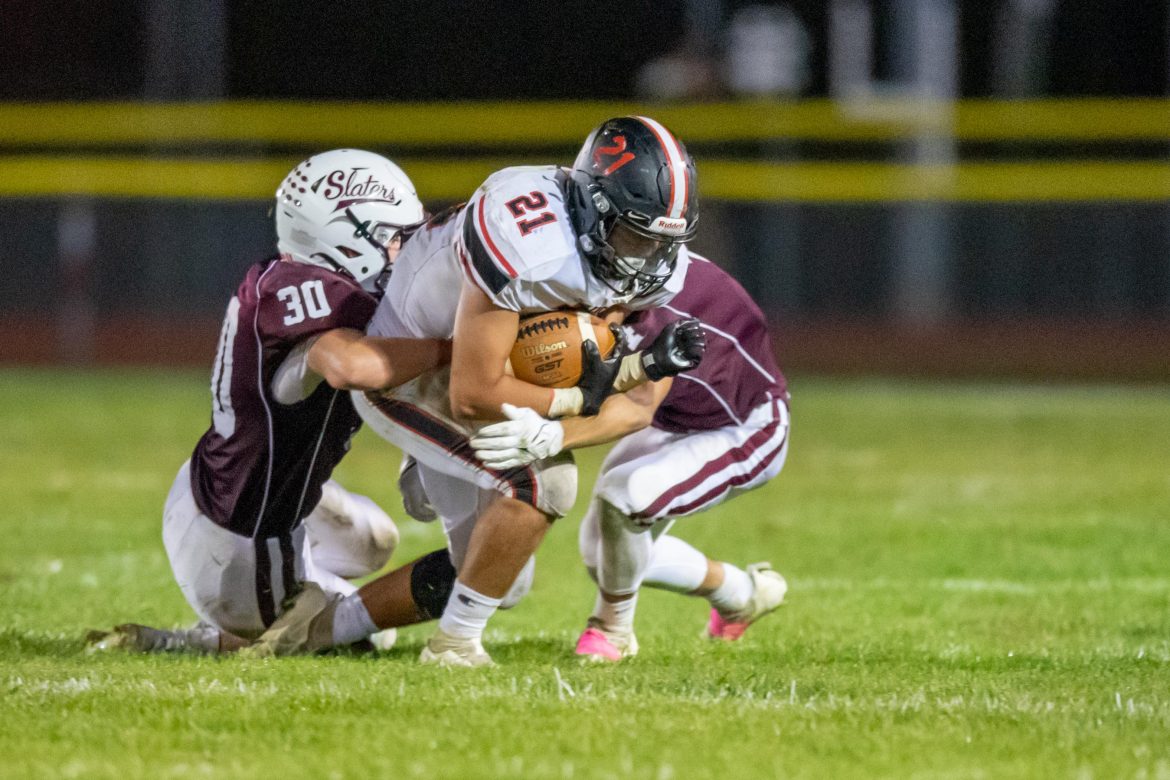 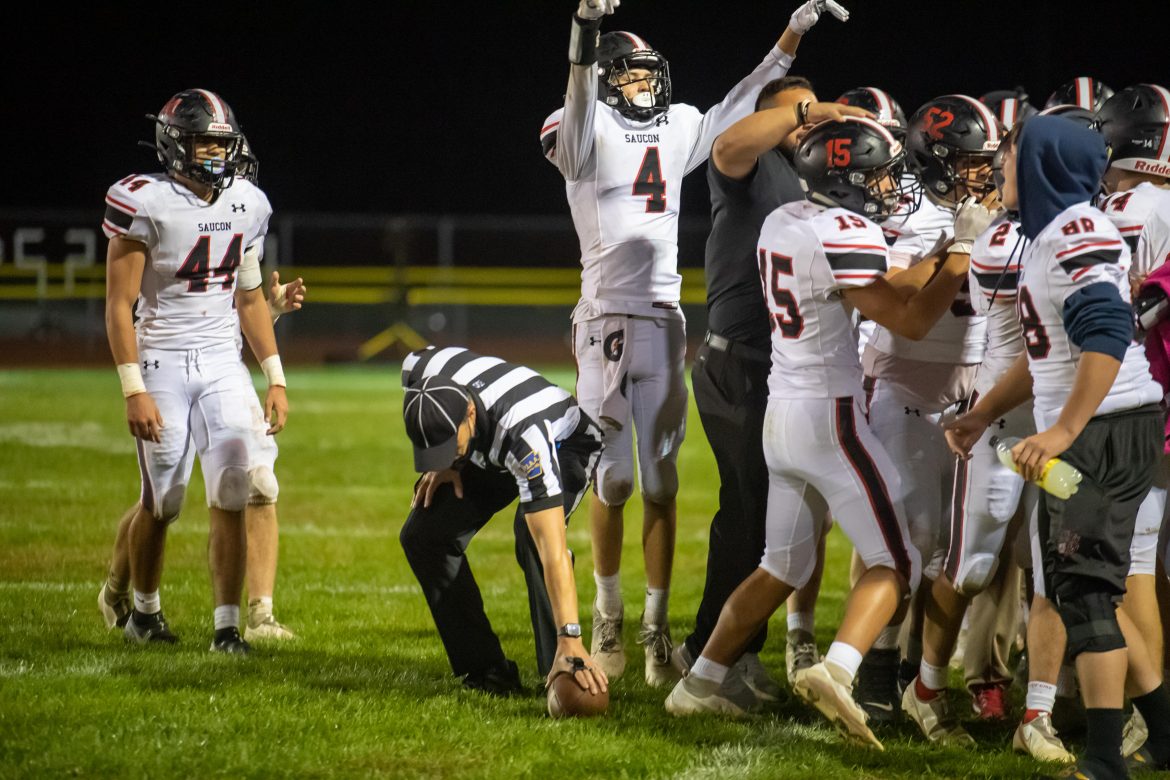 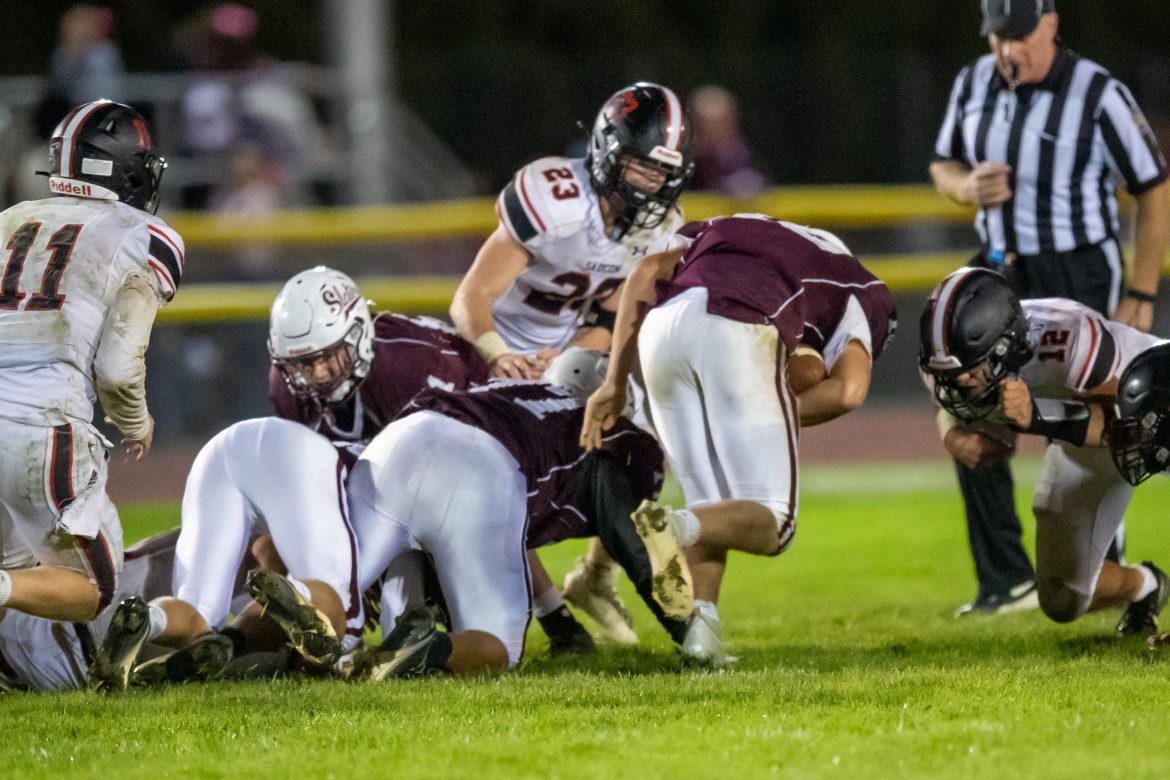 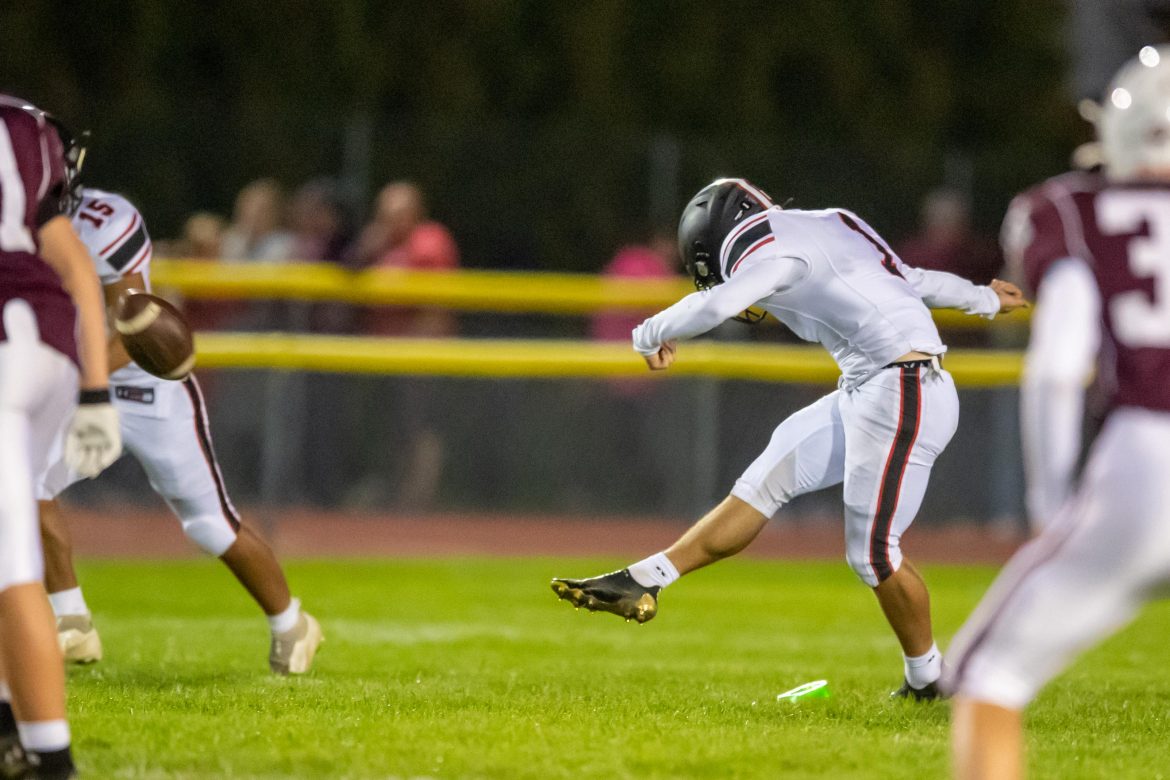 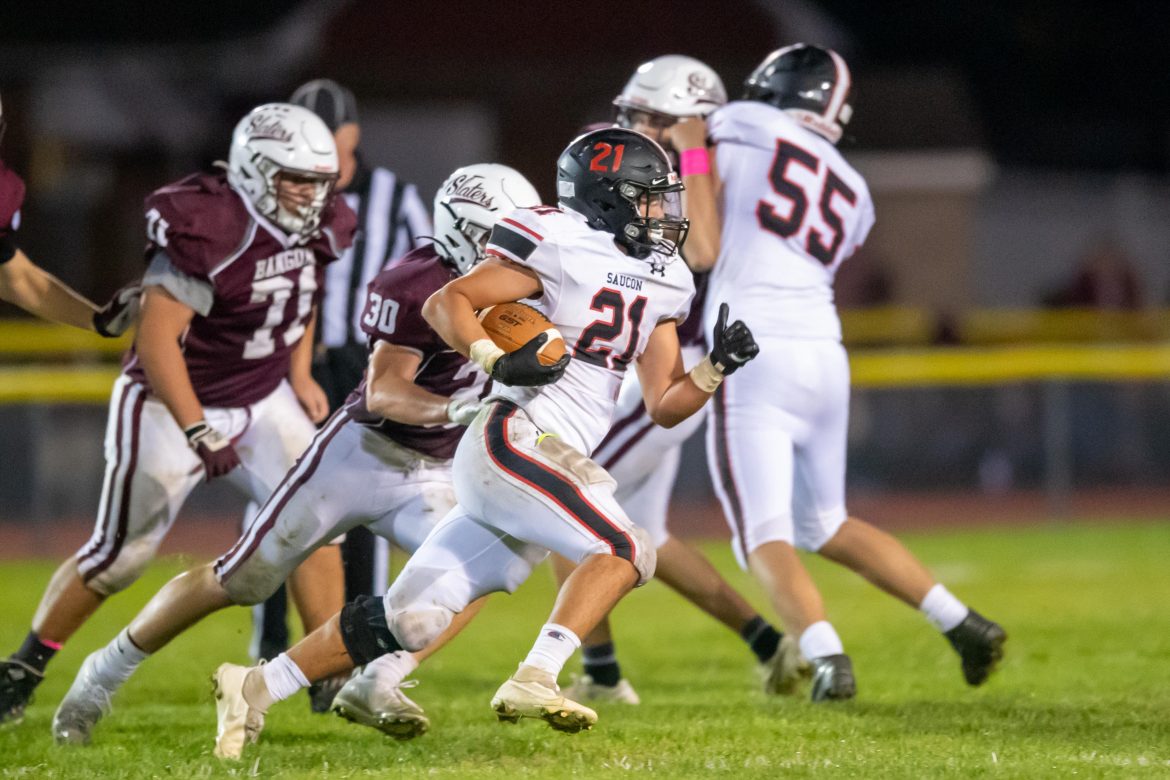 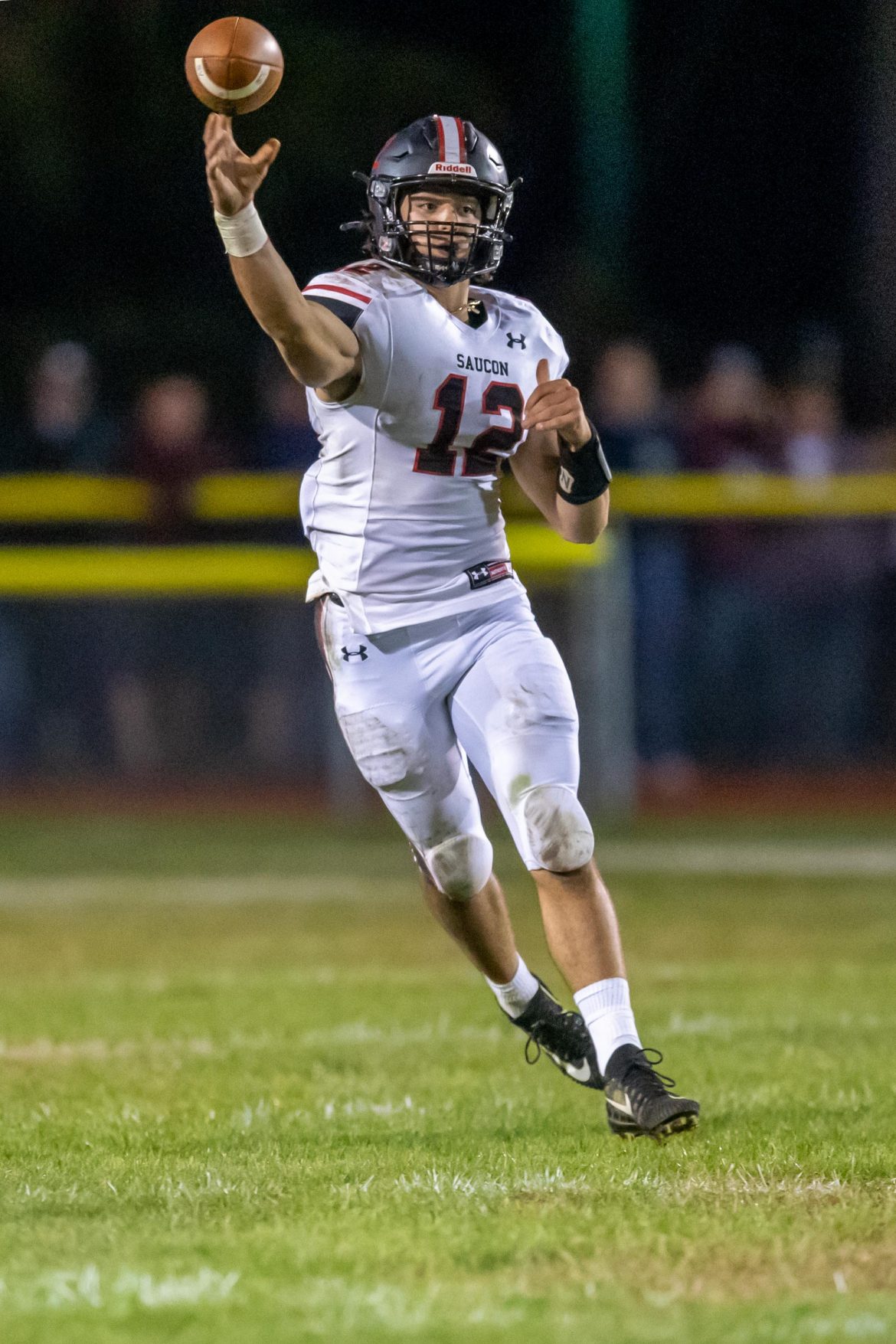