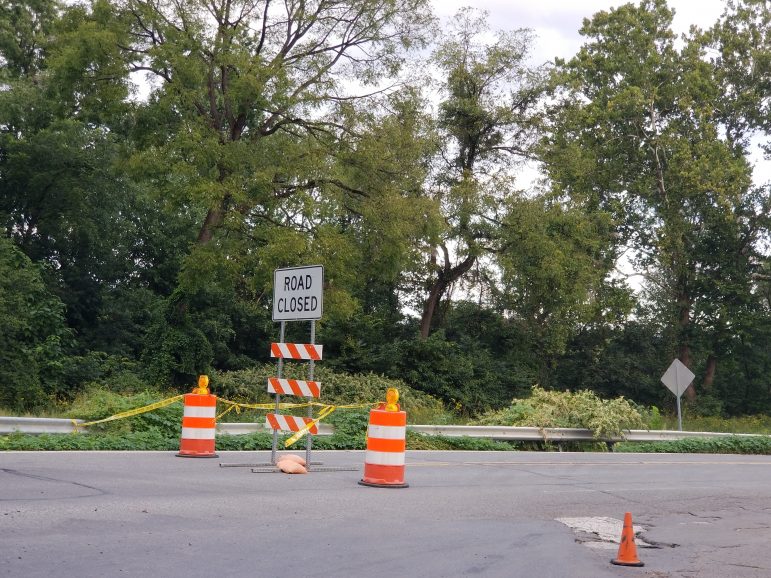 A section of Rt. 611 in Northampton and upper Bucks counties remains closed due a damaged culvert. Above, the road is shown closed and detoured at Browns Drive in Williams Township. PennDOT District 5 spokesman Ron Young said Monday that his agency hopes the repairs needed to reopen the road will be completed in the next month or two. (FILE PHOTO)

A spokesman for the Pennsylvania Department of Transportation said Monday that a closed section of Rt. 611 in Northampton and upper Bucks counties could reopen “sometime in the next month or two,” while acknowledging that regardless of when the road reopens it won’t be “soon enough for the thousands of motorists that rely upon it.”

Ron Young, District Press Officer for PennDOT Engineering District 5, said work has progressed on the project to repair a culvert in Williams Township that was damaged when heavy rain from the remnants of Hurricane Ida inundated the area in September.

He explained that the contractor for the project is currently waiting for the delivery of materials, and in the meantime has begun preliminary site work, such as installing erosion and sedimentation controls.

>>If you value our reporting, please consider supporting it by becoming a Saucon Source member today!

“The Department hopes to get the road open as quickly as possible so people won’t be detoured for the entire winter season,” he continued.

“If all goes well,” he said, “it is estimated Rt. 611 will open at some point in the next month or two;” a prediction which would put the reopening time frame sometime in early February to early March.

Young noted that the estimated timeframe is contingent upon weather conditions cooperating as well as the availability of supplies.

Young said PennDOT appreciates the motoring public’s patience while the road remains closed and a detour is in place.