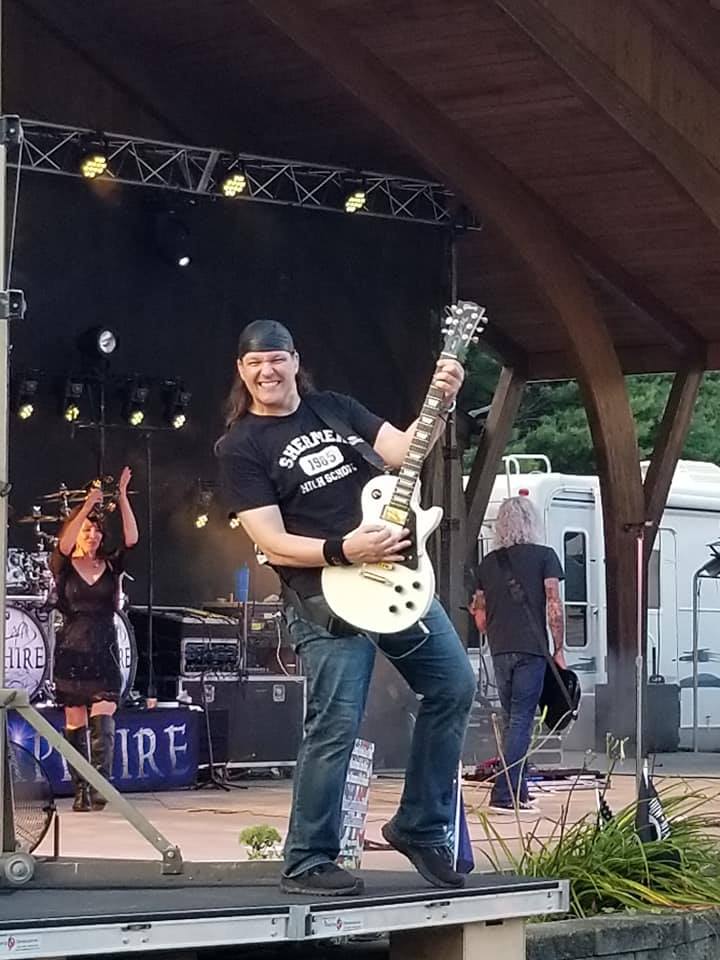 Above, COVID survivor Eric Ziegmont of Schuylkill County performs with ’80s tribute band Sapphire. His fiance, Michele Scribbick, is pictured in the background. Both recovered from COVID-19 they contracted in September, although Ziegmont’s case required treatment in the ICU at Geisinger St. Luke’s hospital. (Photo contributed by Michele Scribbick.)

Eric Ziegmont and his fiancé, Michele Scribbick, started experiencing symptoms of COVID soon after they performed with their band, Sapphire, in early September 2021. They left for vacation in Ocean City, Md., the next day, where Ziegmont, 49, spent it sick, lying in their hotel room, enjoying the ocean view but too sick to go to the beach. Each day he felt progressively worse with classic COVID symptoms: fever, chills, aches and coughing.

Scribbick had milder symptoms that went away in a few days, but Eric’s condition lingered.

After they returned home to Morea, in northern Schuylkill County, and his condition worsened as he struggled to breathe, she convinced Ziegmont to go to Geisinger St. Luke’s. He spent two weeks there in critical condition at the edge of death.

“I was never more thankful to God than when I was discharged from Geisinger St. Luke’s after they saved my life. I received great care there,” he said, now fully recovered and back to work and singing and playing guitar on weekends.

Avoiding the Vaccine (at First)

Neither Ziegmont nor Scribbick had been vaccinated against COVID before getting sick, but that has changed since then. Both got their first vaccine shot in December and are looking forward to getting the second dose in January.

Since he has been physically active most of his life and in good shape, Ziegmont believed he could beat the virus. But it hit him hard, landing him in the ICU at Geisinger St. Luke’s, where he was put on high-flow nasal oxygen from the time he was admitted.

“I remember one of Eric’s doctors telling me he might not make it,” recalled Scribbick, her voice trembling. “He said he had pneumonia resulting from COVID. The doctor was upset with the way the virus had attacked Eric’s lungs.”

He was treated with the antiviral medicine Remdesivir, steroids and other drugs, which didn’t seem to be effective at first.

She posted messages on the band’s Facebook page to keep their fans and friends apprised of her fiancé’s condition. She asked people to join her wherever they were in a prayer vigil for Sapphire’s singer and guitarist. Instead, about 150 came to the hospital on a Friday night, gathering outside to pray for Ziegmont and let him know they were there for him.

“It was amazing,” said Scribbick, remembering that night with a mix of sadness and relief.

Getting Better all the Time

When things looked like they couldn’t get worse, they suddenly began to get better.

Ziegmont’s breathing improved slowly but gradually, and he was discharged from the hospital at the end of September. It took months for him to heal, using supplementary oxygen at home until he could breathe comfortably on his own. He started working out again to bolster his strength and build up his lung capacity.

He’s returned to work at STS Transportation in Pottsville, and he and Scribbick are again singing with Sapphire and an offshoot of the band called JEM. They are scheduled to appear with Sapphire on Jan. 15 at the Grantville Hollywood Casino near Harrisburg.

The performance will be a high note for each of them, Ziegmont said, adding he has the lungs and energy to keep the place rocking all evening as the band covers the hits of Styx, Boston and Whitesnake.

Ziegmont sings praises for his fiancé, giving her credit for getting him to Geisinger St. Luke’s in time to save his life.

“If I didn’t listen to Michele and go to the hospital, it would have been too late,” he said.

“We credit this miracle first and foremost to God, Eric’s unwavering faith, our compassionate Pastor Rimi Xhemajli of The New Awakening Church in Orwigsburg, all the members of our church, family and friends, answered prayers and having the best dedicated team at Geisinger St. Luke’s who fight the good fight every day,” added Scribbick. “May God bless them for all they did and continue to do!”

Note: This local health news is brought to you in partnership with St. Luke’s University Health Network. For more information about COVID-19, visit CovidActNow.org.