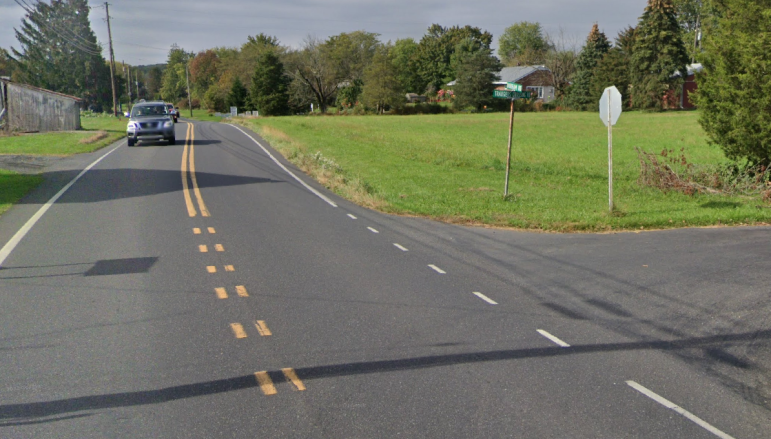 Above, a view of the intersection of Rt. 412 (Durham Road) and Traugers Crossing Road, looking north. Pennsylvania State Police at Dublin said they investigated a two-vehicle crash which occurred there Tuesday morning. According to police, the accident happened when a 17-year-old girl turned into the path of a northbound driver on Rt. 412. (Credit: Google Maps)

Police say a 17-year-old girl and her female passenger were unhurt in a two-car crash at Traugers Crossing Road and Durham Road (Rt. 412) in Nockamixon Township Tuesday.

According to a news release from state police at Dublin, the accident happened around 9:12 a.m., when the girl turned left from the stop sign at the end of Traugers Crossing Road and into the path of an oncoming vehicle.

The girl–who was operating a 2022 Infiniti QX80–turned onto Rt. 412 southbound “without verifying that the roadway was clear of oncoming traffic,” police said.

The oncoming vehicle was identified by police as a northbound 2011 Ford F-250 Supercab operated by a 27-year-old man from Riverside, N.J.

Neither the man nor his male passenger were injured in the crash, the news release said.

The release indicated that the pickup truck passenger was from Millstone Township, N.J., while the passenger in the girl’s vehicle was from Old Bethpage, N.Y., and said that all of the occupants of the two vehicles were wearing seat belts at the time of the crash.