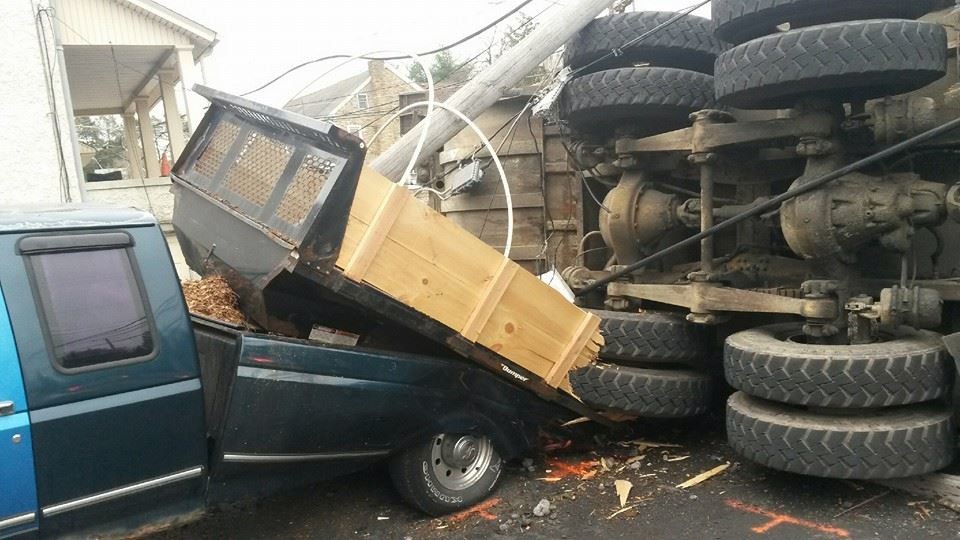 A pickup truck parked in front of the Leithsville fire station in Lower Saucon Township was damaged when a garbage truck crashed into it Tuesday morning. Township police said the crash happened after the truck's brakes failed on Flint Hill.

Editor’s Note: This article has been updated with additional information provided by the Lower Saucon Township Police Department.

A serious accident that occurred Tuesday morning on Rt. 412 in Lower Saucon Township bore eerie similarites to a horrific wreck that destroyed the Leithsville fire station and killed a motorist in May 2012, but it could have been much worse if not for the quick-thinking of the truck’s driver, township police said. 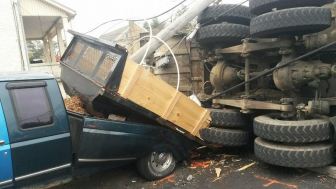 A pickup truck parked in front of the Leithsville fire station in Lower Saucon Township was damaged when a garbage truck crashed into it Tuesday morning. Township police said the crash happened after the truck’s brakes failed on Flint Hill.

In a news release issued late Tuesday afternoon, police said the driver of the Reiss Bros. garbage truck that caused the accident was eastbound on Flint Hill Road when he realized his brakes had failed coming down the steep hill.

Police identified the driver as Shawn Swavely, 41, of Quakertown, and his passenger as Jordan Roemmele, 24, of Easton.

“He recalled that a similar situation occurred in the past in which a truck had crashed into the firehouse near the intersection (of Flint Hill and Rt. 412), causing it to be destroyed by fire,” police said. “He decided to attempt to make the left-hand turn onto Route 412 to avoid hitting the rebuilt firehouse, but the vehicle flipped over, snapping a telephone pole in half and crushing a parked vehicle.”

Stephanie Cereghino posted on the Saucon Source Facebook page that the parked vehicle is owned by her brother, who she said sprang into action after the accident.

“Thanks should go out to Nathaniel Griffin, who pulled the driver and passenger of the garbage truck out, extinguished the truck as well as having his work truck totaled, saving the fire station again,” she commented.

In the fatal 2012 accident, the brakes on a dump truck failed as it was coming down the hill, and the truck careened across Route 412 and into the fire station just as another vehicle operated by a Springtown man was passing in front of it.

The building was completely destroyed by a fire that subsequently engulfed it, and the driver of the dump truck was seriously injured.

A rebuilt Leithsville fire station was dedicated on the site of the former station by Se-Wy-Co Fire Company in May of this year.

Police said that although Swavely and Roemmele suffered minor injuries in Tuesday’s accident, the firehouse was not damaged. The men were taken to St. Luke’s University Hospital for evaluation.

As a result of the accident, Route 412 between Apples Church Road and Flint Hill Road was closed for approximately four hours Tuesday.