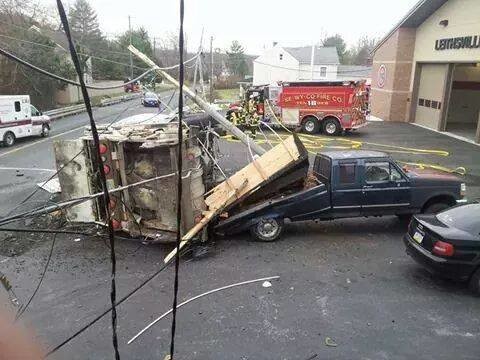 A Facebook photo shows a garbage truck on its side in front of the Leithsville fire station on Rt. 412 in Lower Saucon Township on Dec. 2, 2014.

Note: The surveillance video of the Dec. 2 accident has been uploaded to YouTube. View it here.

Several members of the audience at the Dec. 22 Lower Saucon Township Council meeting gasped as dramatic video surveillance footage of a Dec. 2 garbage truck accident at Flint Hill Road and Rt. 412 was played by Se-Wy-Co Fire Co. representatives, prior to a discussion about serious traffic safety concerns in the area. 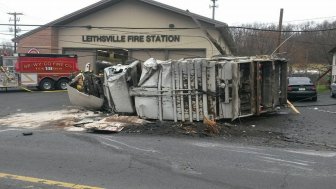 A garbage truck struck a utility pole and rolled over in front of the Leithsville fire station in Lower Saucon Township Dec. 2, closing a busy section of Rt. 412.

The video was recorded by a camera mounted on the front of the brand-new Leithsville fire station–a building that replaced an earlier structure destroyed in an eerily similar accident less than three years ago.

In the remarkably clear footage, the runaway Reiss Bros. garbage truck appears at the bottom of Flint Hill Road and within a split second blows the stop sign at Rt. 412, just moments after a car passes through the intersection.

The driver of the garbage truck–whose brakes had failed, according to township police–attempts a left-hand turn onto Rt. 412 North in order to avoid the fire station, but strikes a utility pole and overturns on top of a pickup truck directly in front of the building.

The footage shows that immediately after the accident, residents and eyewitnesses emerged from nearby buildings to help extricate the driver from the truck and make sure no one else was hurt.

As a result of the accident, Rt. 412 was closed for much of the day, but the results could have been much worse, Se-Wy-Co safety officer and trustee Bill Csaszar told township council.

“Had that been a propane truck, Leithsville wouldn’t exist,” he said. 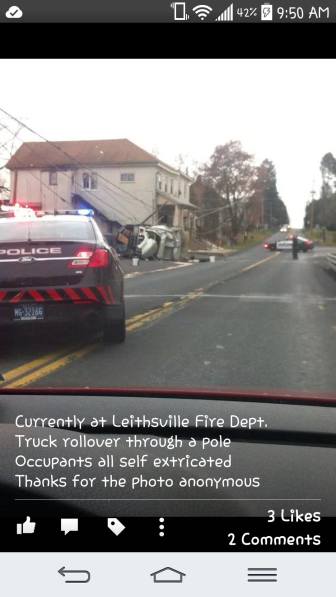 Lower Saucon Township police cars block off a section of Route 412 near the scene of an accident in front of the Leithsville fire station Dec. 2.

Csaszar admitted that after the May 2012 accident–which left one man dead and the firehouse in ruins–he didn’t think another one was possible.

“We didn’t think it would happen a second time,” he said. “I’m not that foolish now.”

“We need to do something with truck traffic on Flint Hill Road,” he told council.

Csaszar was joined by fire company chief Gary Wisniewski in urging council to send a letter to PennDOT requesting that a traffic safety study be conducted on the road, which they said many truck drivers use as part of a short-cut between upper Bucks County and Interstate 78.

“Their alternate route—their real route should be 309,” Csaszar said.

He told council he “cannot count” the number of near-misses he’s witnessed at the busy intersection, which also has visibility issues because of the historic Leithsville Inn. That building is located on the southeast corner of the intersection, very close to the road.

Among the suggestions Csaszar made to council for improving safety at the intersection were:

Council members supported the idea of requesting a traffic study, but pointed out that the latest incident involved a garbage truck, which could have been making local pickups.

Township manager Jack Cahalan said the truck was traveling from the Reiss Bros. warehouse on Passer Road to a local landfill when the accident occurred.

“It wasn’t always like this,” he told council. “It’s only since the traffic’s picked up so much on 309, trying to get to 78, (that truck traffic has increased on Flint Hill).”

“There’s a number of places that they could use other than coming down this way,” he emphasized.