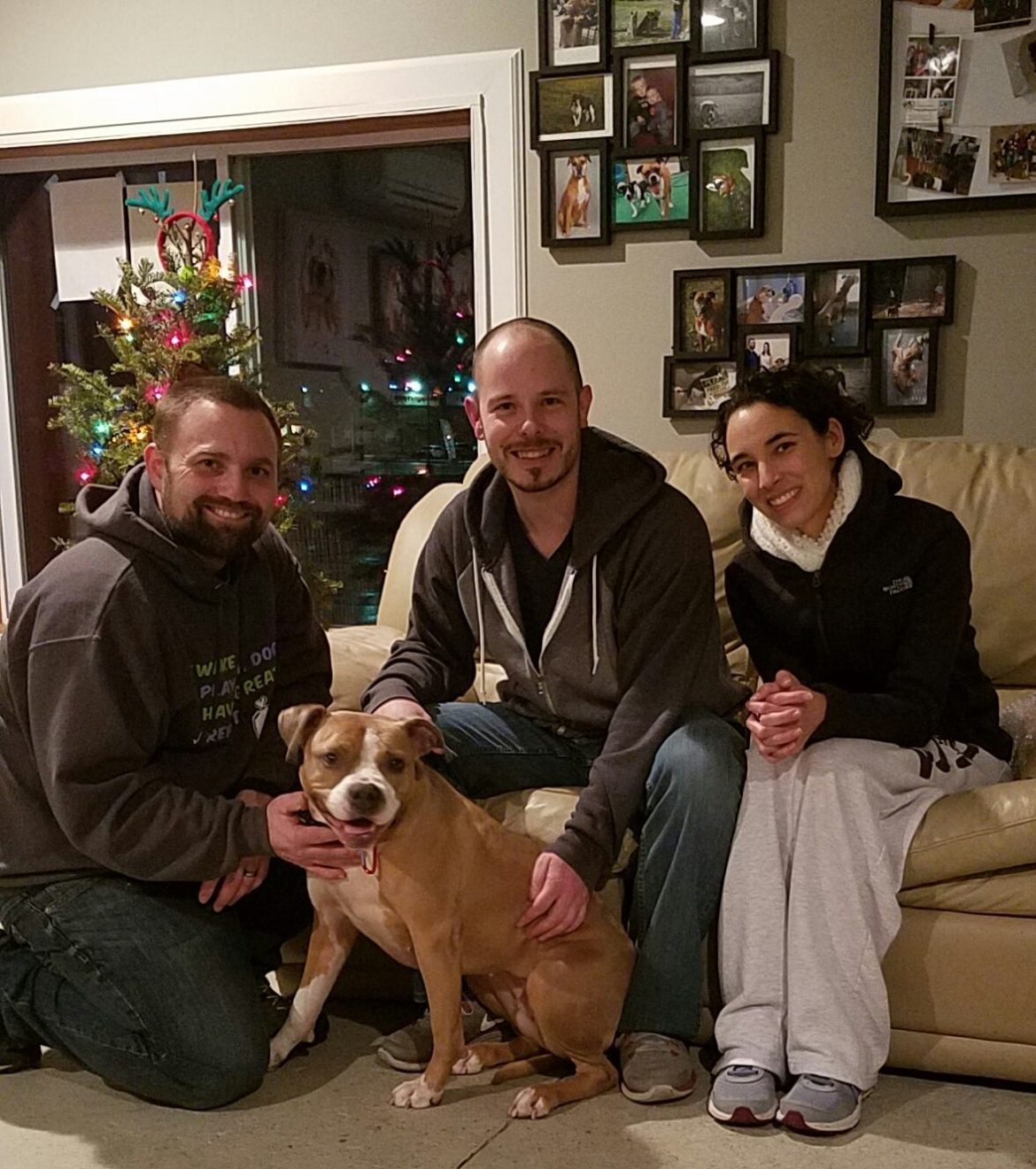 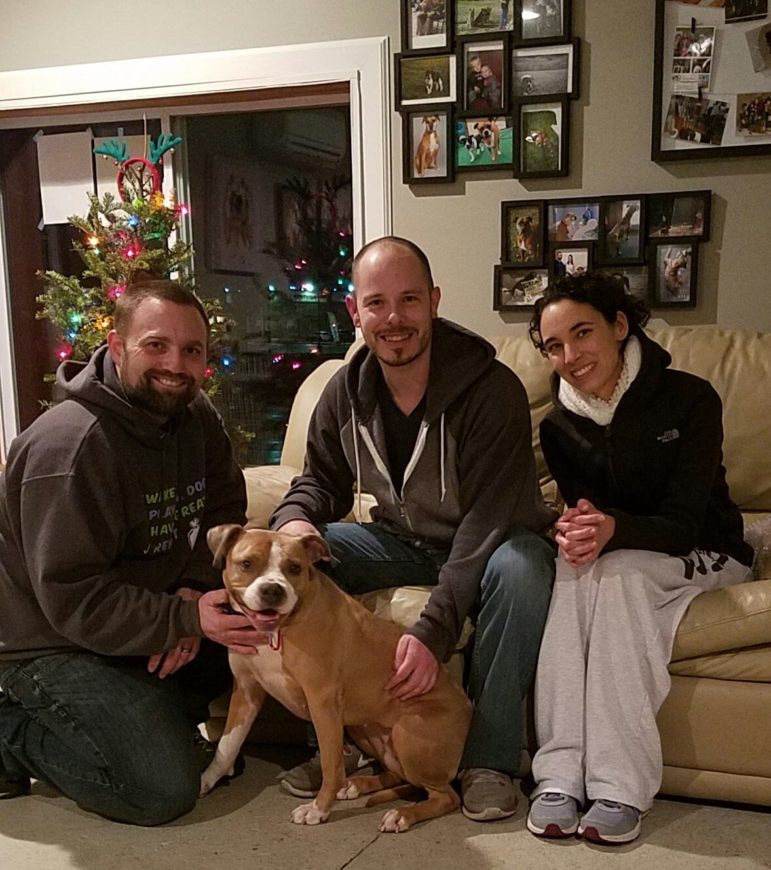 AFT Dog Training and A Furry Tail Come True owner Anthony Schwickrath, left, with Sally and her new owner, Justin Mai. Sally was abused and left to die on an Allentown street before she was rescued, nursed back to health at the Lehigh County Humane Society and received donated rehabilitation training at AFT Dog Training.

A dog who had a rough start in life is at last settled in a new home, thanks to help from volunteers at the Lehigh County Humane Society and AFT Dog Training, which is owned by A Furry Tail Come True co-owner Anthony Schwickrath. A Furry Tail Come True is a doggie daycare center with locations in Hellertown and Nazareth, and is the sponsor of Saucon Source’s weekly pet profile, “Pets in Need of Homes,” which featured Sally and highlighted her heartbreaking story last month.

Sally’s story began with a horrific incident in Allentown, in which authorities say she was hit with a hatchet, leaving a large gash on her forehead, according to a Nov. 5, 2015 Morning Call story.

In addition to the gash, Sally was extremely emaciated when found, which led animal welfare workers to conclude her former owners had tried to starve her to death, the newspaper reported.

Following her rescue, Sally was cared for at the Lehigh County Humane Society, where she began a journey down a long road to physical and emotional recovery.

Tips received by the humane society indicated Sally had been used as a bait dog, meaning she was forced to fight other dogs, and need not just medical care.

It is theorized that when she didn’t respond to attempts to get her to fight, her owners tried to kill her, Schwickrath said, adding that Sally has a playful disposition now.

A mentor/teacher through Animal Behavior College, Schwickrath was assigned to work with a student, Michelle Border, who is the trainer at the humane society.

Through that connection, he was asked to help rehabilitate Sally.

“Lehigh County Humane Society did a fantastic job getting her back in shape, but Sally was not doing well in a shelter environment and needed to be rehabbed,” Schwickrath explained.

“We typically have two or more dogs that we pull from shelters in the area, and rehab them free of charge,” he said.

He added that he didn’t know at the time he was asked to work with Sally that she was the abused dog that had been in the news. In fact, he did not know about her background until later, when he posted on AFT Dog Training’s Facebook page that she was up for adoption.

Through various balanced training techniques, Anthony, his wife Jessica, and his trainers were able to help Sally make better decisions, he said. Halfway through her rehabilitation program, she graduated from Anthony’s and his trainer’s stable pack of dogs to playing with the daycare dogs at A Furry Tail Come True Too in Nazareth.

“I would be contacted at least once a week by Lehigh County Humane Society, and they were astonished by her progress,” Schwickrath said. “They could not believe how well-behaved she was on a leash and how we fixed her leash reactiveness. They could not believe she was actually playing with other dogs.”

Updates on Sally’s progress were posted on Facebook almost daily, and as a result of those postings on both the AFT Dog Training and A Furry Tail Come True pages many people came forward requesting to adopt her.

“We thank all of them for coming forward and trying to adopt her,” Schwickrath said Sunday.

Last week, her forever home was found when Justin Mai stepped up and saw her and wanted to meet her.

Mai, of Northampton, said he stumbled across a post about Sally that Anthony shared and was touched when he saw the photos of her and read her story.

“I lost my dog, a boxer named Phantom, Aug. 2,” he explained. “After having a dog I knew I’d want one again one day but nothing felt right when people shared or contacted me about other dogs, and I just knew at some point the right dog would come into my life. I saw the story and messaged Anthony that night about her. (I) saw her two days later and filled out adoption paperwork and Anthony called me this past Wednesday with the good news.”

Mai and his girlfriend even had a birthday cake for Sally when they came to take her home, Schwickrath said.

“We have spent the last few days together and Sally is such a sweetheart,” Mai said. “My family including my niece and nephew have been over to visit her almost every day. We went to the pet store together and she’s quickly become my little shadow. Anthony and everyone who has helped her on her road to recovery did such an amazing job with her. She is such a great dog.”

Schwickrath said he maintains a waiting list of dogs like Sally that need help from various shelters in Pennsylvania, New Jersey and New York.

The cost to rehab a dog like Sally is typically $3,000 to $5,000 at a training center, but her rehabilitation was provided free of charge by AFT, along with her food.

“We also donated about $300 in products to her new owners, such as a Mini Educator from E-Collar Technologies, a pretty heart collar, a leash and a herm springer collar,” Schwickrath said.

In addition to owning A Furry Tail Come True with his wife Jessica and AFT Dog Training, Schwickrath is a board member and treasurer for The Center for Animal Health & Welfare, Head Dog Trainer at Common Sense for Animals in New Jersey, a member of the Big Dog Council for the Lehigh County Humane Society and a Professional Member of the International Association of Canine Professionals.