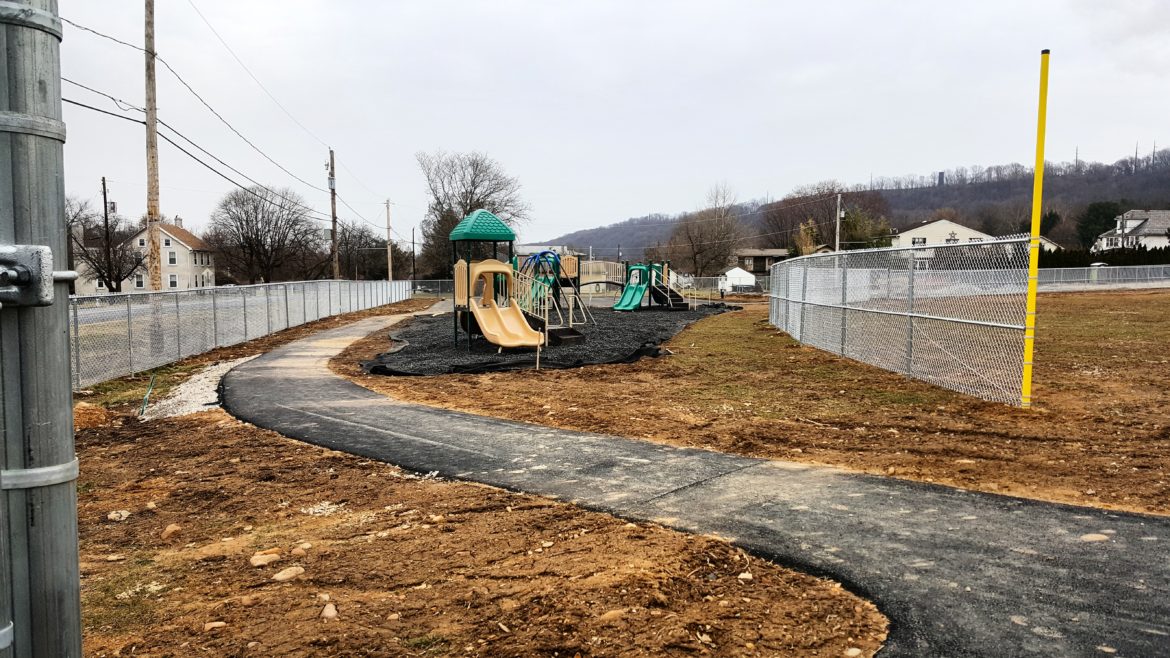 A view of the new playground at Steel City Park, which is undergoing extensive renovations in Lower Saucon Township. Please see below for additional photos of this work in progress. 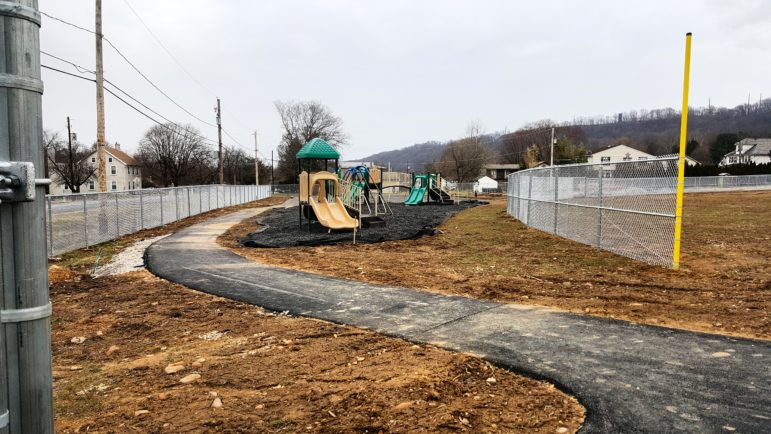 A view of the new playground at Steel City Park, which is undergoing extensive renovations in Lower Saucon Township. Please see below for additional photos of this work in progress.

The following answers to frequently asked questions about the improvements being made to Steel City Park were recently shared by Lower Saucon Township officials on the township’s new Facebook page.

The park is located in the Steel City section of the township and–partly because the extensive renovations have been ongoing for a period of time–has frequently been the subject of questions put forward by residents of the neighborhood.

Q: Why the massive overhaul instead of small upgrades (new equipment, etc.)? A: On Aug. 4, 2008, a visioning meeting was held with the residents of the Steel City area as well as township consultants and officials. As a result of the session a list of what residents liked and disliked about the park was developed and helped to guide the new park design. To address these changes and create a park the community envisioned, small upgrades would not have been sufficient and a complete reconfiguration was needed.

Q: What is the point of a walking path? A: A paved walking path was one of the most requested items by the community at the vision meeting.

Q: Why a new fence, why is it so large, and why is there so much? 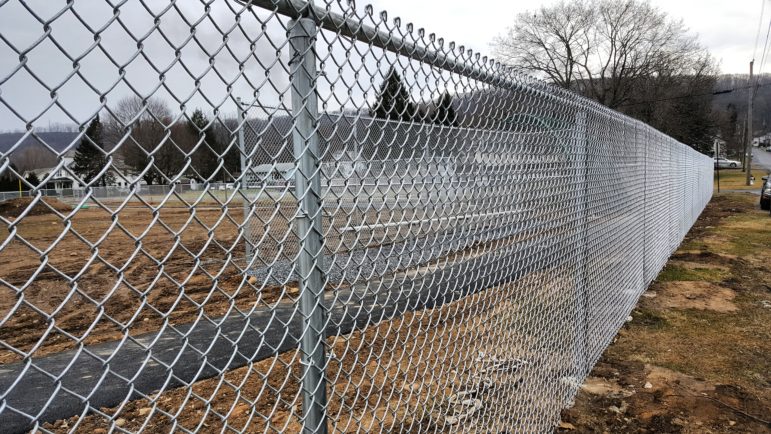 A: Safety and security of the park and its users was another main concern of the community. The perimeter fence performs several functions including preventing children from running into nearby streets and it assists in keeping sports equipment, such as basketballs and baseballs, from exiting the property. The fencing for the baseball field performs safety functions,such as protecting players, spectators, and others using the park, including the tot lot area.

Q: Why a new pavilion? A: The old pavilion was in poor condition due to age and several instances of vandalism, including one incident in which a support pole was cut with a saw. It was not designed to be relocated, which needed to occur with the new park design. Additionally, the new pavilion is larger allowing for more room for people to enjoy.

Q: Why does the park feel too crowded (“nowhere to run around”)? A: The park is approximately 2.2 acres and the Township vacated a paper street which was adjacent to it, increasing its size slightly. Although it is the smallest recreational-use park in the Township’s system, the design was maximized to allow as many different activities as possible that the community requested.

Q: Why are the swings too high to get into? A: The grade of the park, including the swing set area, has not been brought up to its final level – rubber mulch will be added which will allow easy use of all installations.

Q: Will the baseball field be used for Little League? A: The ball field dimensions are compatible for children up to and including the Little League Major Division, which is 9 – 12 years old.

Q: What is the ditch, and is it safe to leave un-fenced? A: During construction, an Erosion and Sediment Plan requires an area for sediment to collect during storm water runoff. This ditch will be partially filled in and a vegetated swale (“Rain Garden”) created for long term NPDES storm water control. The swale will direct water toward the drain allowing it to exit the property.

Q: Where are people supposed to park? A: A nine-space parking lot exists on the southeastern corner of the property, which includes one handicap space. Additional parking is available on side streets, and the Steel City Fire Company lot across Riverside Drive can be used for overflow. Parallel parking spaces were planned on Riverside Drive, however PennDOT denied the request to create the spaces.

Q: Couldn’t the money have been better used on other projects, such as road repairs? A: Money used to create the park came from funds which could not be appropriated to uses other than parks or open space, and a matching grant of approximately 50% was awarded by Northampton County.

Q: Where will the trees and shrubs go? A: The Township Planner will be reviewing the landscape design plan and it will go out to bid in the coming months.

Q: Who will maintain the trees and shrubs? A: Specific tree and shrub species have been designated to minimize the need for maintenance, such as pruning and trimming. 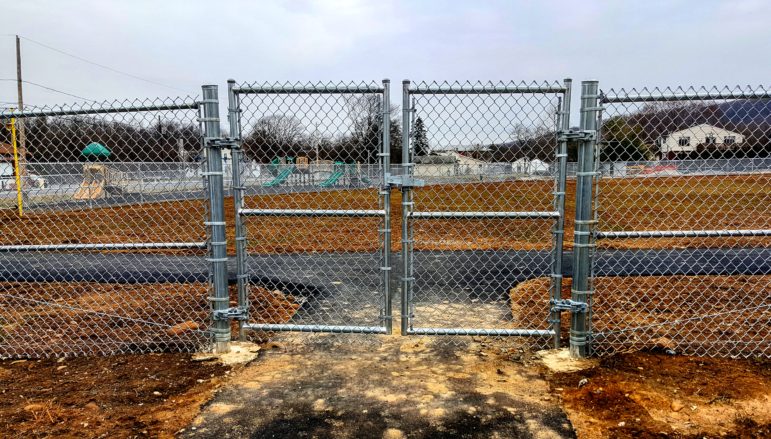 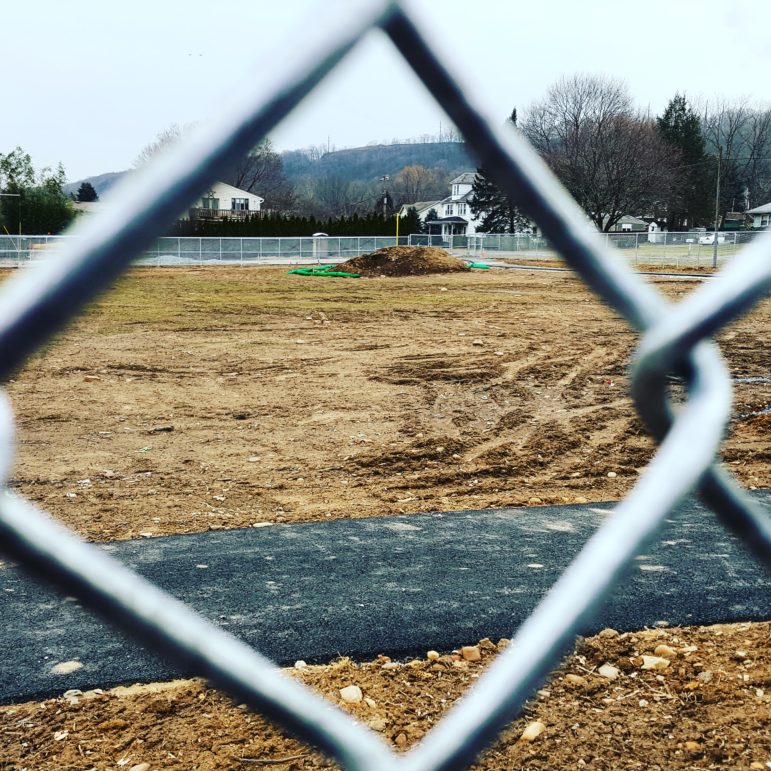