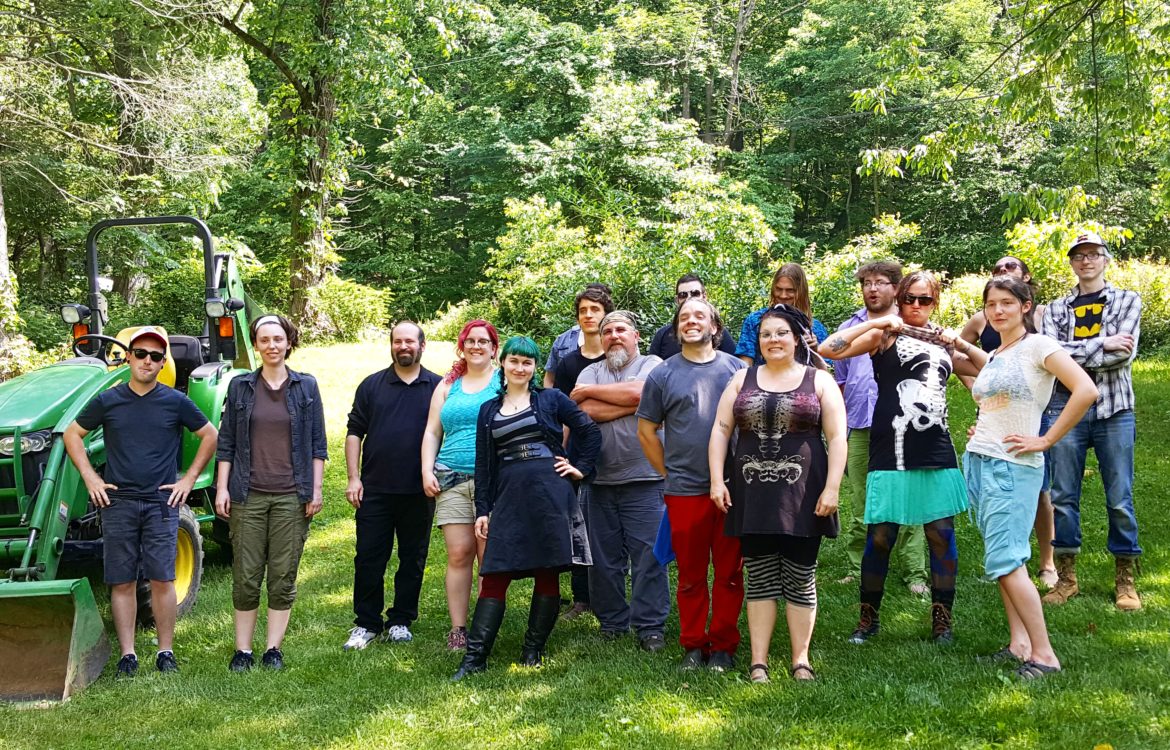 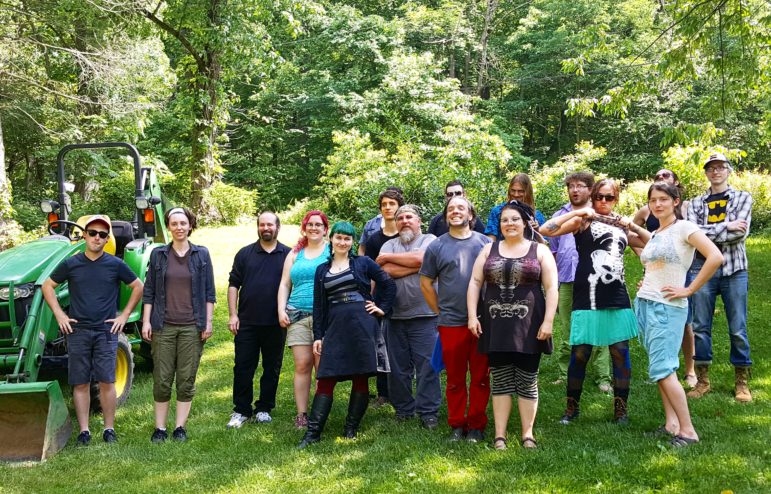 This Way To The EGRESS took a break from filming Sunday for a group shot featuring everyone that was working on the video for “Going Home Again” as well as Jesse Repash (center), who owns the property where the video was shot.

Although it’s probably more associated with the country and bluegrass crowd, rural Wassergass in Lower Saucon Township became the verdant backdrop for a new video by Bethlehem-based circus punk band This Way To The EGRESS Sunday.

Taylor Galassi (lead vocals, accordion, piano) said what led his group to the Repash family property on Nursery Lane was an online post in search of a filming location for “Going Home Again,” a single from This Way To The EGRESS’s upcoming album Onward! Up A Frightening Creek, which is scheduled for release Sept. 22. The single will be released sometime in August or September on the band’s website, iTunes, the Google Play store, Spotify, Amazon and other platforms. 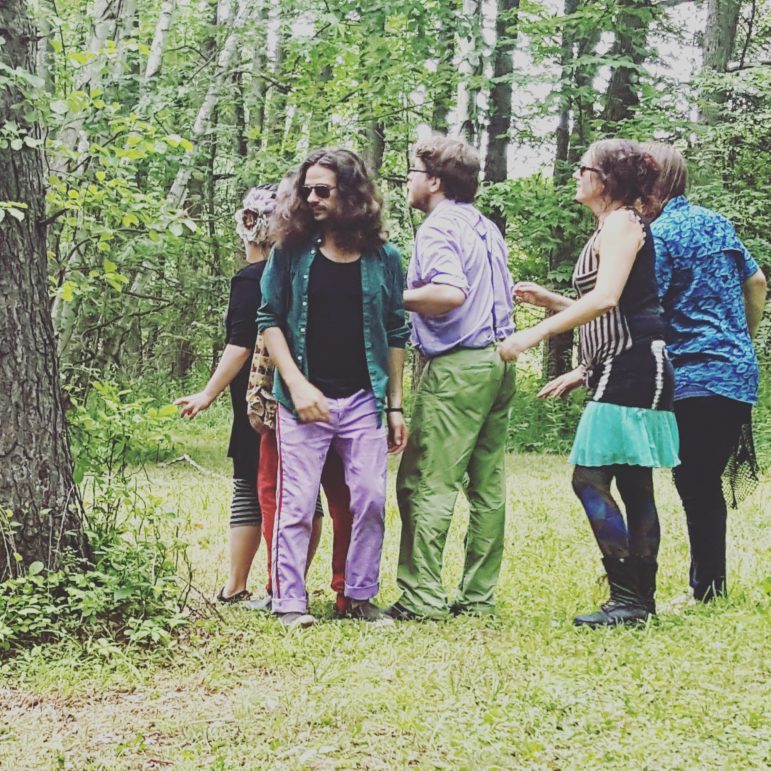 The six members of This Way To The EGRESS, a Bethlehem-based circus punk band that filmed a music video in Wassergass Sunday.

Deborah and Jesse Repash saw the Facebook post in search of a location for filming the video, and as fans of This Way To The EGRESS they invited the band to scout their property, which Galassi said turned out to be the perfect setting for their surrealistic video that features characters wearing various types of masks running through the woods.

The video is metaphorical, and represents how many little things in life can “eat us up,” he said. 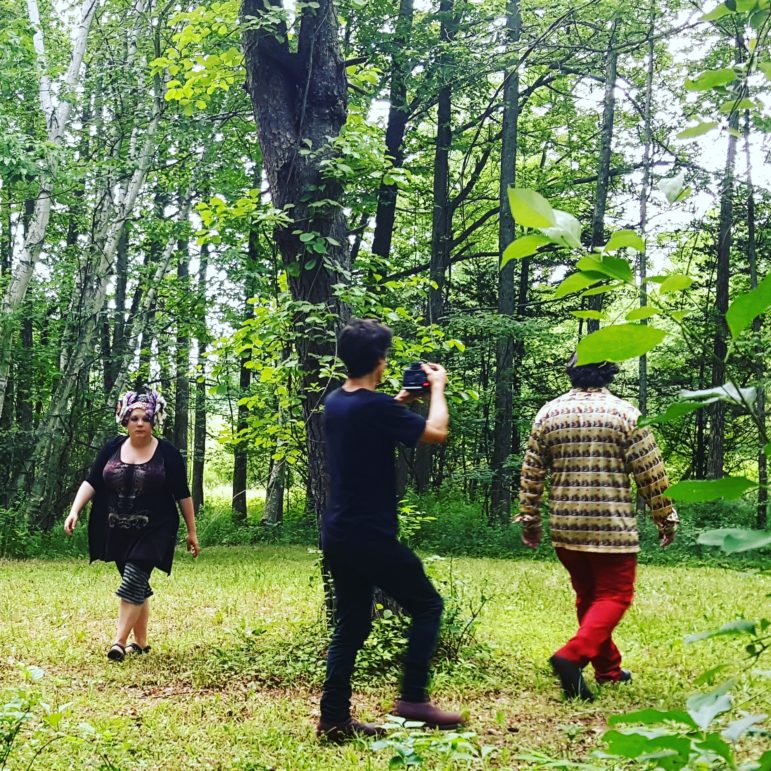 A tree in the center of a circular grove was the focal point for one scene in which the band members march around it, before the first person in the line (Sarah) stops short, the others run into her and then everyone flees into the woods.

The Repashes welcomed the six-member group along with a camera crew that included a drone operator, props and extras to their wooded property for a full-day shoot on what was a typically hot, steamy July day with a brief passing shower.

Jesse helped by using an ATV and attached trailer to haul a variety of supplies to various locations around the property, which includes ponds and meadows in addition to towering trees spread across 15 undulating acres. 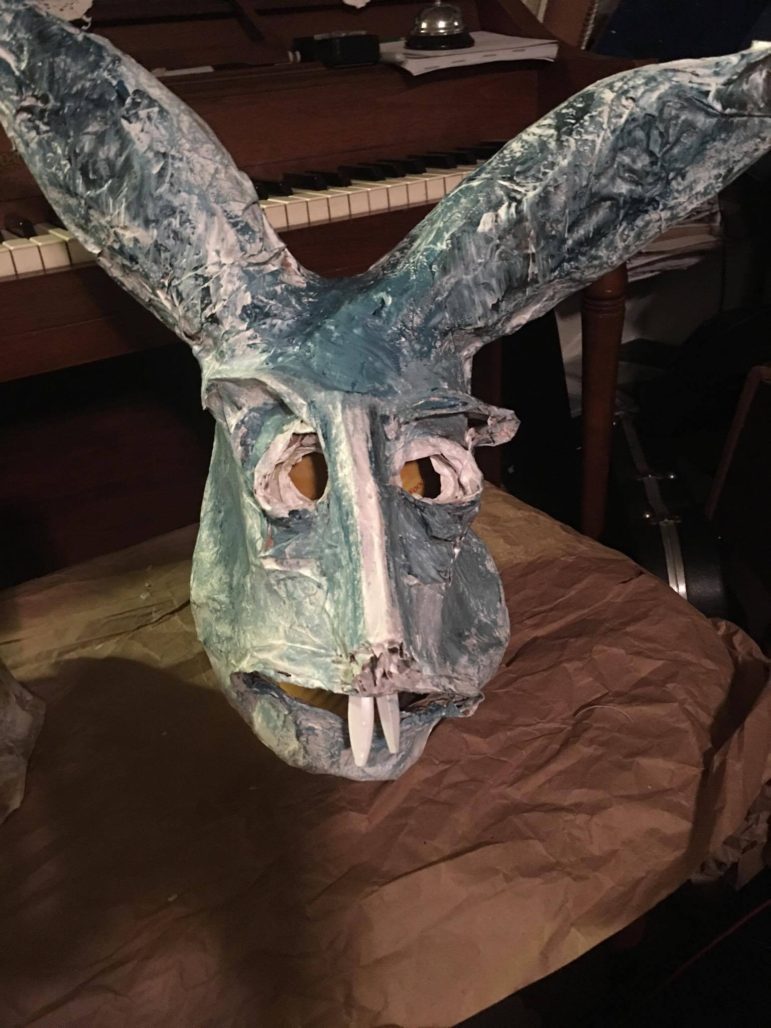 One of the masks made especially for the video (photo credit: Taylor Galassi)

Shown described the experience of filming on his property as “really great,” and posted on Facebook that the entire shoot lasted more than 15 hours.

“Taylor, Strat and myself have birthed this video and I have spent the last two weeks spending every spare moment on preparing for it to come to fruition,” she wrote. “All of those may be true, but ultimately I think, I am completely awestruck by the fact that there are people out there who will sacrifice their time, comfort and mobility to be a part of something that will exist long after our earthly shells will.”

Musically the band can be a challenge to categorize. They draw inspiration from hobo cabarets, “horror movies, abandoned insane asylums, freaks and sideshows, buckets, old deadened trees, Burlesque, lisps, bones and tendons, girls on stilts, sad clowns, confetti, spoons and washtub bass’ and vaudeville,” according to a list of interests on their Facebook page, where their music is described as “incorporating elements of punk, Balkan, Klezmer, blues, reggae and ragtime with Americana folk-rock causing a genre-defying sound that P.T. Barnum would be proud of.”

This Way To The EGRESS is keeping busy this summer with shows locally and in other states, and also has a week of shows scheduled in the U.K. in August, where they will perform at the famous Boomtown Fair in Winchester, Hampshire, England, on Aug. 11. This fall they will tour in support of their new album, which is their fourth full-length studio recording, Galassi said.

Their next local performance is July 8 at 9:30 p.m. at One Centre Square in Easton. On Aug. 5 they will play a European tour kick-off show at The Funhouse in Bethlehem.

A full list of upcoming dates can be found on their website, where you can also listen to samples and purchase their music, described by the group as “intricately arranged audible cocktails which will be sure to make you move.” 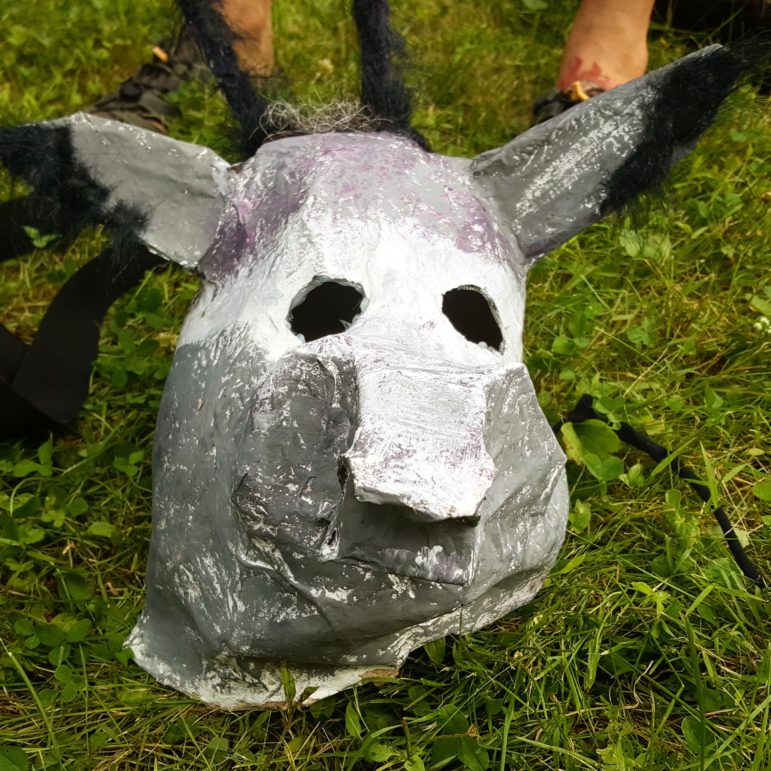 The band makes many of its own props, such as these masks which were used in the filming of the video for “Going Home Again,” their upcoming single. 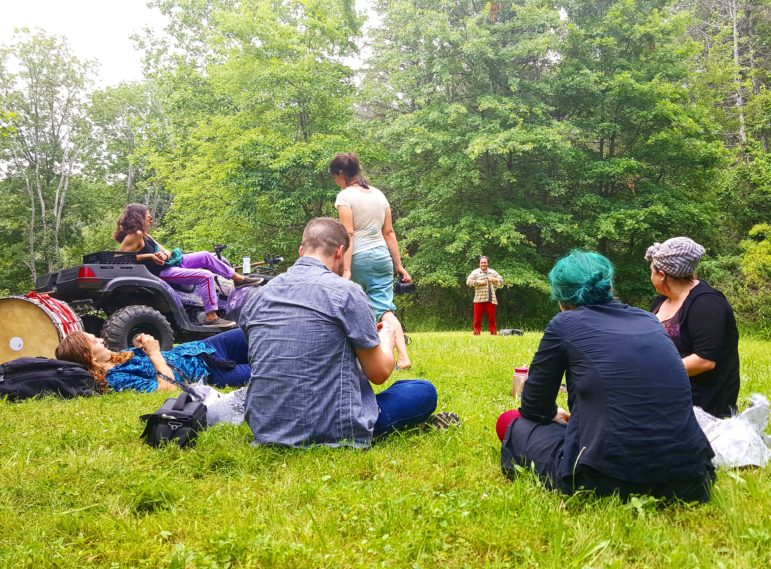 Due to the nature of filming a music video there was a lot of downtime throughout the day for many of the people on the shoot. This meadow on the Repash property was a place to relax while filming of individual characters took place nearby. 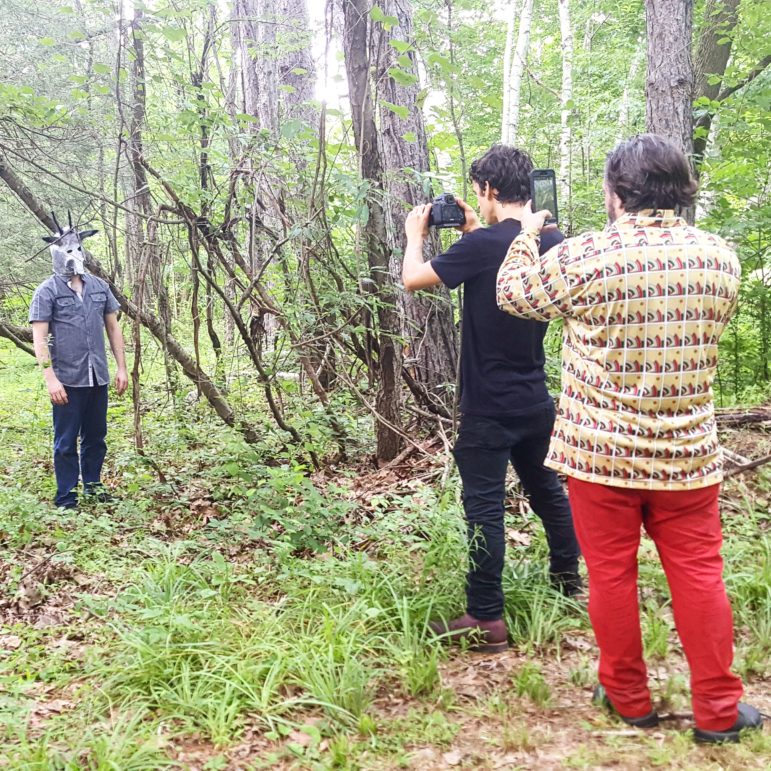 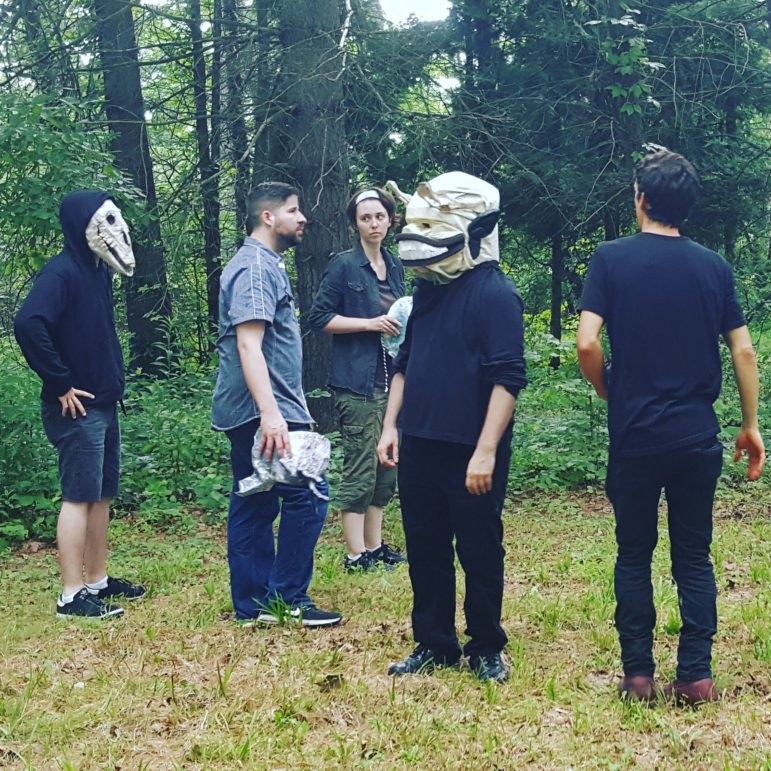 Some of the masks worn by performers in the video were reminiscent of characters in the classic children’s book, “Where The Wild Things Are.” 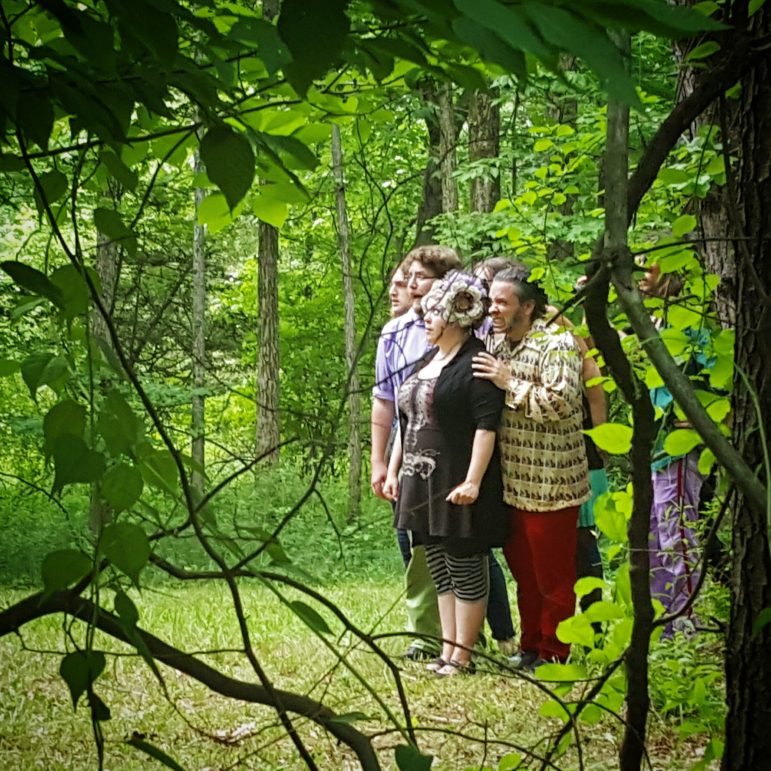 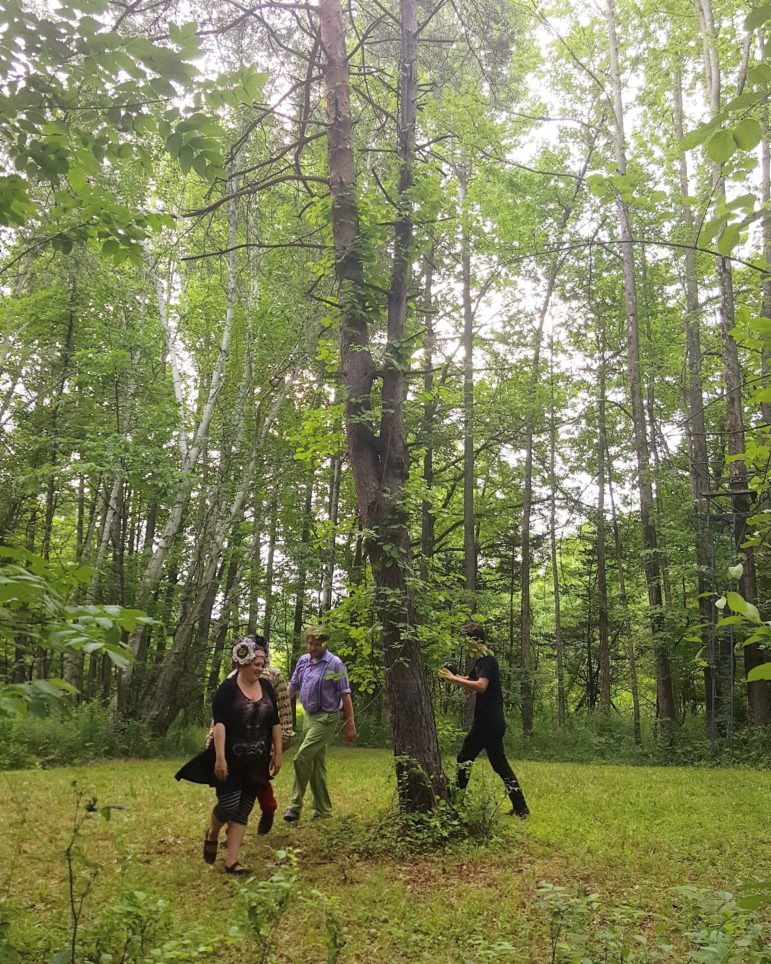 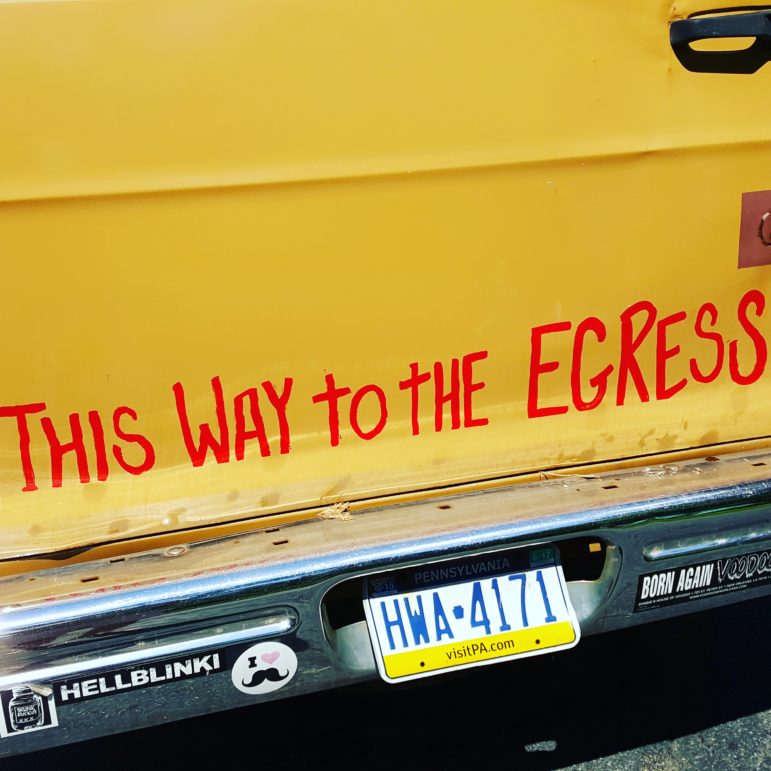 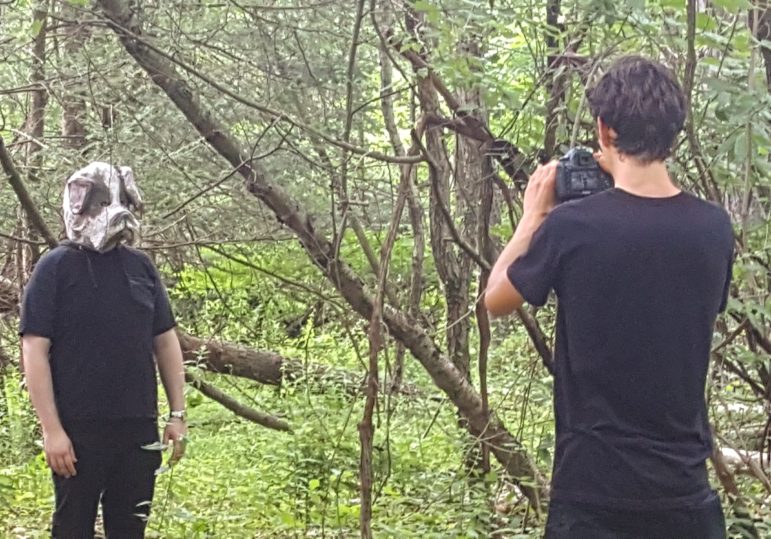 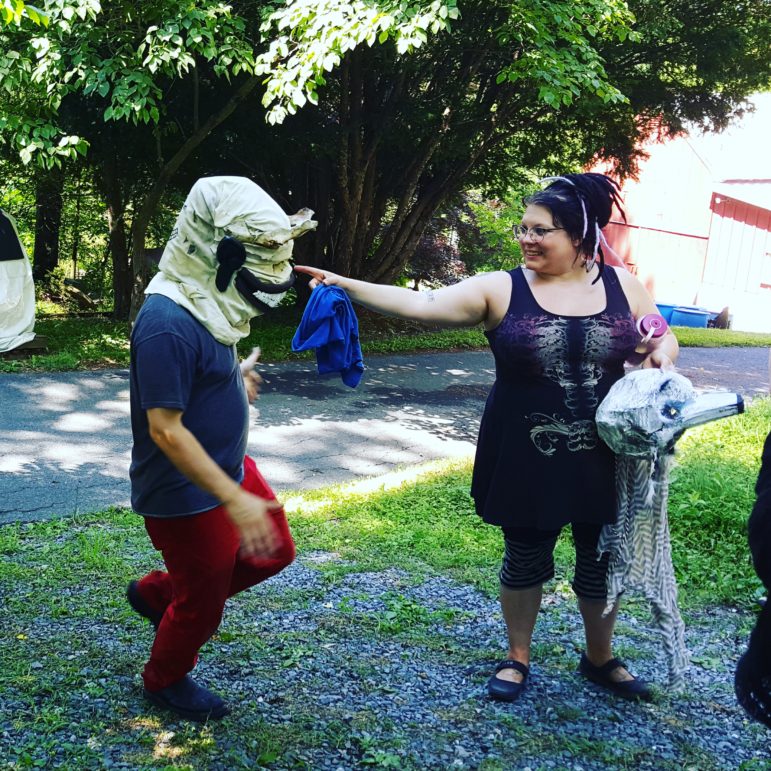