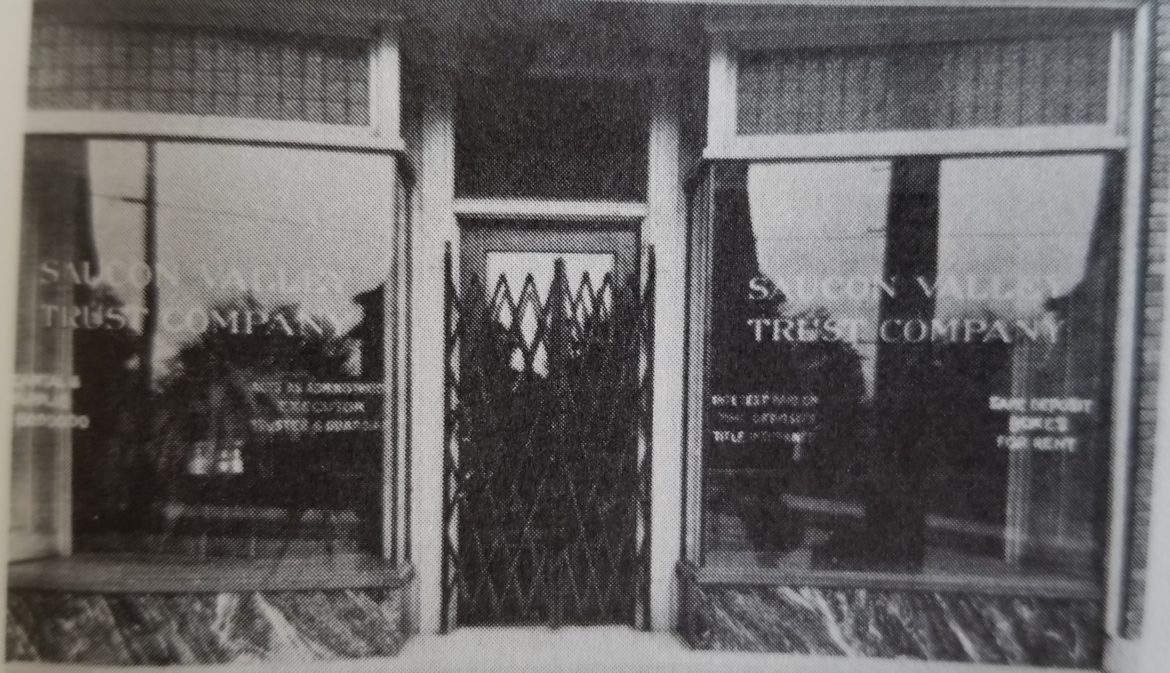 A news account of a 1924 bank robbery at Hellertown’s Saucon Valley Trust Company reads like something straight of a pulp novel or a noir movie, with robbers who told the bank’s employees to “put ’em up,” tied them up and made a dramatic escape out of town in a roadster. This period story from the Bethlehem Globe was reprinted in the booklet, “Hellertown, Pa. Centennial, 1872-1972” along with several other historic news articles. 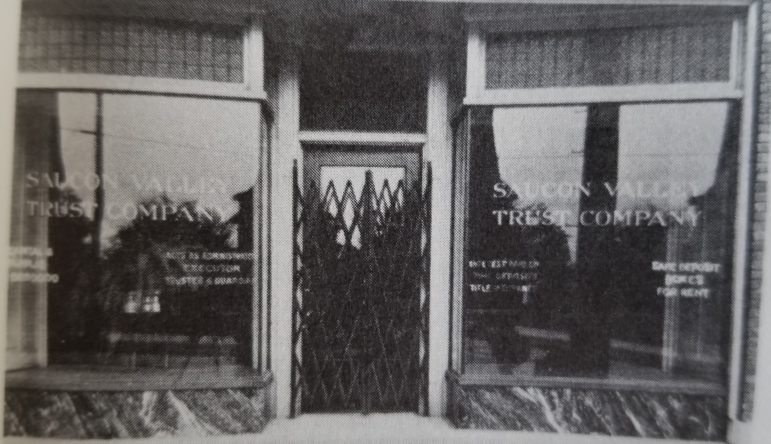 Headline: Bandits Rob the Hellertown Bank This Afternoon; Two enter bank at 2:45 and tie Thos. Peffer and Elmer Funk to chairs in room, then gather up several thousand dollars in cash–loss covered by insurance

The Saucon Trust Company at Hellertown was robbed by between $10,000 and $20,000 a few minutes before 3 o’clock this afternoon by two highwaymen who backed Cashier Elmer Funk and Assistant Secretary Thomas Peffer into a rear room of the bank and tied and gagged them with rope; grabbed several packages of money and departed south toward Leithsville in a green roadster automobile, carrying a Pennsylvania license, the first two figures of which were said to be “33.” The loss is covered by insurance.

The men appeared to be about 30 years of age, one of them tall and slim; the other heavy set. They entered the bank when there were no customers in the banking room and were in the place only three or four minutes.

A 13 year old boy, who was  outside the bank, when the highwaymen entered and pulled down the shades at the windows fronting Main Street, thought something was up and ran across the street to William Wagner and Foster Eisenhart, the latter a proprietor of the Hellertown drug store. Before the party could get to the building the robbers had come out and jumped into their machine.

Eisenhart, Wagner and Elwood Boehm went into the bank about the time Herbert Trauch, driver for Fritz’s bakery, of Quakertown, who often deposits money at the trust company for his customers, entered. The party discovered Funk and Peffer tied up in the rear part of the bank and released them. Several of the men got busy at once, notifying the State police and police headquarters in surrounding towns and cities.

The two robbers entered the bank about the time Mr. Peffer and Mr. Funk were busy setting up the accounts for the day. Mr. Funk took a step toward the grilled window, thinking the men were customers. Both robbers pointed large revolvers at Funk and Peffer with the remark, “Put ’em up.”

The larger man of the two continued to address Mr. Funk, while the tall, slim robber walked around the partition and through a swinging door opening into the banking enclosure. The other highwayman followed a few steps behind, and then the robbers produced heavy twine and menacing the bankers with the revolvers, backed them into the room and trussed them up in chairs.

One of the robbers was heard to remark:

“Butler drove us out of Philadelphia; now tell the local cops to get us.”

At another time, one of the robbers said:

“Pull the trigger; pull the trigger,” which seems to indicate that he was thinking of shooting one or both of the banking officials.

The money the robbers secured was taken from the vault. A package containing $5,000, lying on the desk at which Mr. Funk was busy when the robbers entered, was overlooked.

One of the highwaymen had a reddish complexion, the other being lighter, with a heavy mustache. It is evident that the robbers were professionals. Telephone messages were sent to all parts of the Lehigh Valley and Bucks County, as well as to Quakertown and  Philadelphia. 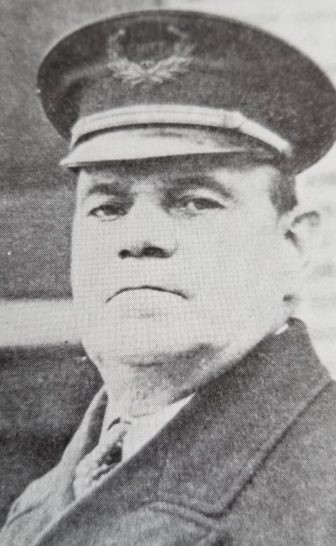 Charles “Chief” Zimpfer, who was chief of police in Hellertown in 1924 and responded to the bank robbery. A native of Baden, Germany, Zimpfer was a law enforcement official in the borough for decades.

The robbers were in the vault scarcely more than 15 seconds, and in the bank itself not more than three minutes. When Trauch, the bakery wagon driver, reached the front of the trust company he noticed that the shades on the window were pulled down, and thought it was strange, as according to his watch it was not yet 3 o’clock. About the time he was wondering what might be the matter, the boy who had given the alarm, with Mr. Wagner, Mr. Eisenhart and several others came running up. Together they entered the bank and discovered the plight of the two bank officials.

Foster Eisenhart, one of the first men to arrive at the bank, said later that he went to the bank as a result of the boy’s suspicion that something was wrong and tried the door, finding it locked. But an instant later the door was unlocked and a man walked out, saying “Now you can go in” as he passed. Mr. Eisenhart later recalled that the man had something under his arm.

When news of the robbery spread rapidly throughout the town a crowd began to collect that increased every minute. Chief of Police Charles Zimpfer, who was the first notified by the officials after they had been released, commandeered a machine and started in the direction believed to have been taken by the highwaymen in the hope of overtaking them.

Victor Wagner, president of the bank, and who is usually there during banking hours, was not there this afternoon, being at the funeral of Harvey Wohlbach, a well-known resident who died several days ago.

The banking house is on Main Street between Saucon and Water streets.