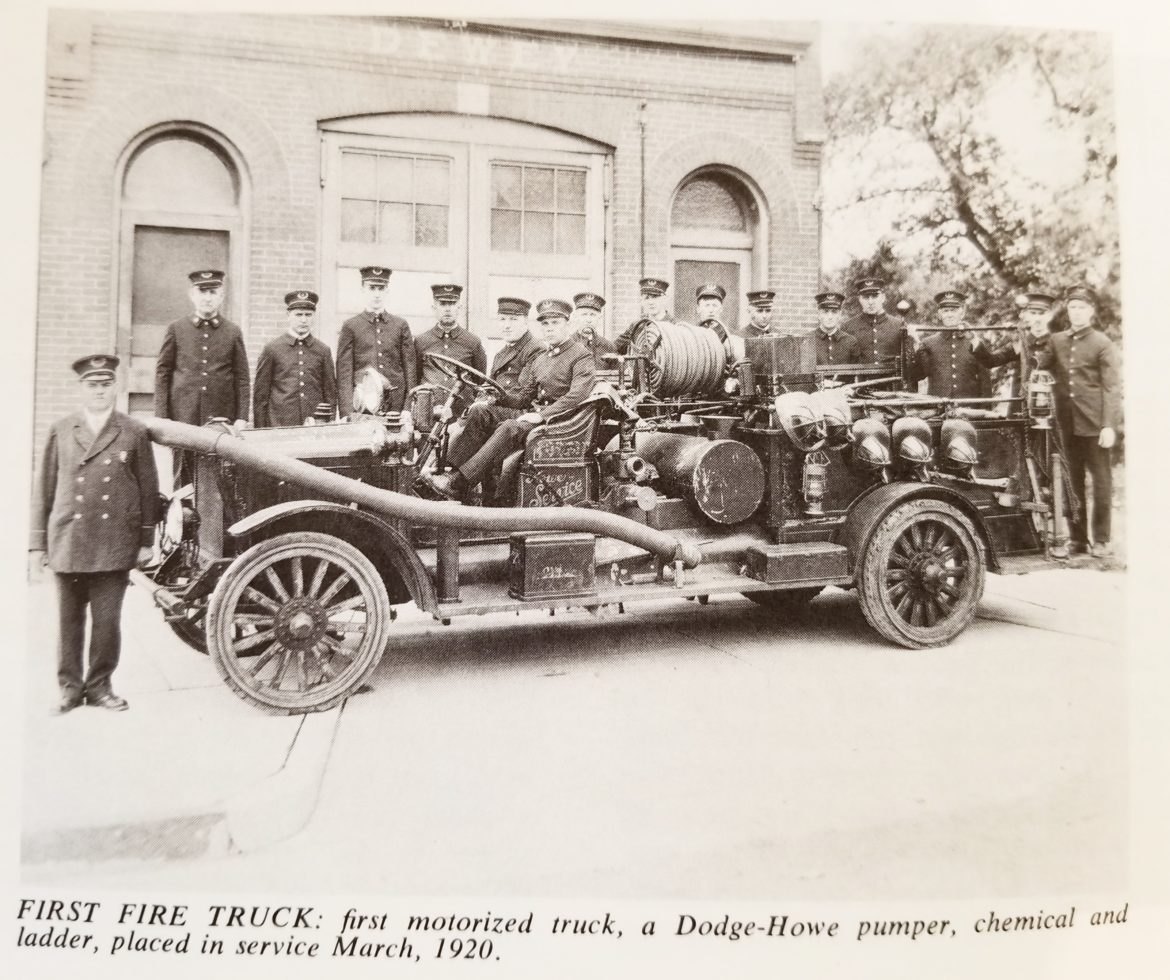 Dewey Fire Company firefighters stand outside what was then their firehouse next to the company's first motorized fire truck, purchased in March 1920.

Note: The following history of the organization of Dewey Fire Co. No. 1 is excerpted from the book “Hellertown, Pa., Centennial, 1872-1972.” To this day the volunteer fire company continues to proudly serve the borough and its residents under its motto of “Neighbors Helping Neighbors.”

When the Dewey Fire Company was organized in 1898 it selected as its motto the word “Service.” Nearly three-quarters of a century have elapsed since then and nowhere can one find single evidence where the Deweys have deviated from their applicable motto. During this Centennial Celebration let us not take for granted the valuable service they have rendered to the community.

In 1896 a meeting was held by several citizens interested in organizing a fire company; however, very little materialized from it. It was to take two serious fires before Hellertown was to receive a fully organized fire department.

During the evening of April 17, 1896, a severe thunderstorm which had assumed extremely high winds swept through the valley causing considerable damage. It was during this storm that the Christ Union Church at Northampton and Saucon streets was struck and set on fire. The lightning struck the steeple and, due to the absence of lightning rods, descended through the interior setting the woodwork ablaze. As soon as the flames were seen residents rushed to the scene and succeeded in saving two organs and the pews of the church. 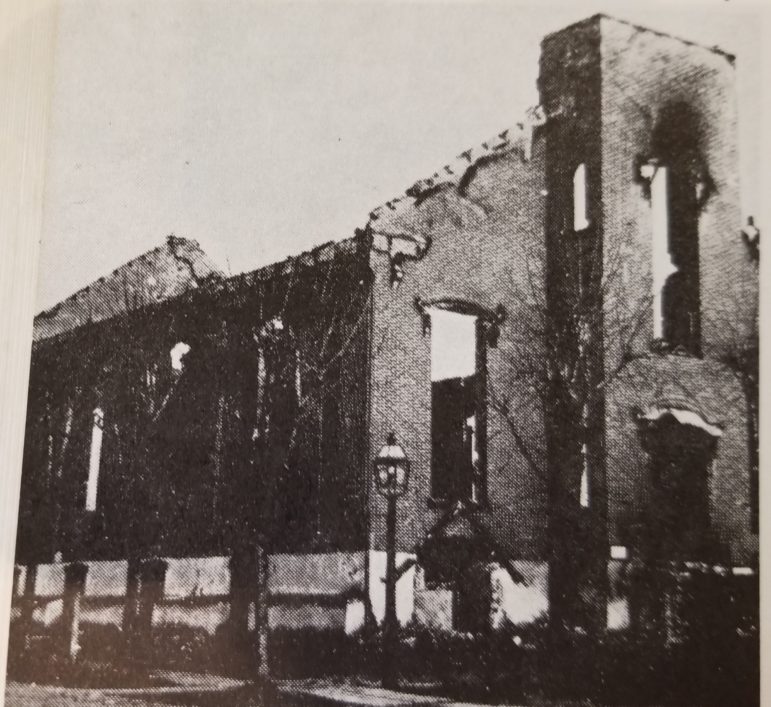 The ruins of Christ Union Church, Hellertown, which burned after it was struck by lightning during a storm in the spring of 1896. The church was rebuilt and today houses the Saucon Valley Community Center at E. Saucon and Northampon streets. The destruction of the church was one of the catalysts for the formation of Dewey Fire Company in 1898.

Owing to the fact that the borough was without a fire company and a water system, the flames could not be successfully fought and it was with some difficulty that adjacent buildings and residences were saved from destruction. Owners of nearby buildings, with buckets, drenched their homes to keep the flames from catching. The church was built of brick and only the walls and other parts of masonry remained after the gutting flames had died. The loss was covered by insurance; however, 10% of the collectable amount was deducted for failure to have lightning rods. Until the completion of the new church, services were held in the I.O.O.F. Hall on Main Street.

The second serious fire that hastened the reality for the need of an organized fire fighting unit and an adequate water supply occurred on the evening of August 30, 1897, when four structures burned. The following is an account as taken from the pages of the Bethlehem Daily Globe, August 31, 1897:

A conflagration of more than ordinary magnitude occurred last night in Hellertown. At about 10:30 o’clock the quiet little town was alarmed by the sight of huge flames consuming the barn of Jacob Hagey, situated on the alley in the rear of the Hagey Main Street home.

Crowds flocked to the sight and saw the fire lay in ashes the large structure, and then consuming the barn of Milton Bright and the stables belonging to Squire More and householder Smell.

At the Hagey barn the scene was awful. Four horses, two sheep and eleven  pigs were housed in the barn, but intensity of the flames was such as to keep the most courageous spirits from any attempt to enter. The kicks and moans of the beasts while in the agony of their sufferings were enough to excite general pity and to tempty many to rescue them from their furnace of death. Nothing could be done but to watch the roaring tongues of fire and to worry because town council has been so negligent in furnishing a means of defense.

While watching the barn being converted into smoke and ashes, Hagey’s valuable watch dog covered with flames ran out of the tottering building and yelled from the tortures he underwent. The animal ran towards the meadow, where a search was afterward made for him, but without success.

The flames quickly communicated with Milton Bright’s barn, where Hagey had a quantity of goods, wagons and harnesses, etc., stored. This, too, was doomed to quick destruction, and with its contents, was converted into ruins. Luckily, the cattle, that are generally left beneath its shelter were in a field away from it, or else they too might have been burned.

The More and Smell’s stables caught the flames and were soon burned to the ground. For awhile it seemed as if destruction of the town was imminent. Such was not the case, however, for luck turned in the people’s favor and the fire died out as embers of the stables became gray and black.

All the consumed buildings, with the exception of Squire More’s, are said to be covered by insurance. The origin of the fire is unknown, but it is supposed that some ill-minded person or persons started the blaze.

The blaze was certainly a lesson for Hellertown to get a move on in getting fire apparatus and a fine fire department.

To prevent the sparks from causing any further alarm or damage, William and Martin Mushlitz were placed on guard about the destroyed buildings.

As it happens no breeze was blowing at the time and this alone accounts for Hellertown not being laid in ashes.

The flames, as in the Christ Union Church, shot upward and made the sky a deep colored crimson.

A large degree of credit for organizing the fire department goes to Milton H. Keller, proprietor of the Cottage Hotel. On December 17, 1897, a meeting was held at his establishment with approximately thirty-five people in attendance. Committees were appointed to draft a constitution and by-laws and several weekly meetings followed. On January 18, 1898, an organizational meeting was held at which time the first officers were elected. Milton Keller was elected as the first Chief. Other officers were: President, Joseph Harris; Secretary, George Hoffert; Treasurer, Jacob Leith; and Foreman, Owen G. A. Riegel. In these early formative days, newspaper articles referred to the weekly sessions as “meeting(s) of the Hellertown Hook and Ladder Company.” Admiral Dewey’s victor at Manil Harbor [in the Spanish-American War] did not occur until May 1, 1898, and it was after that historic event that Chief Keller suggested that the newly organized fire company be called the Dewey Fire Company, No. 1.

Since the townspeople were greatly handicapped in their efforts to save the church by a bucket brigade, the fire spurred the movement for a borough water supply. Borough council began to discuss the matter after the first fire and at their July, 1896, meeting appointed a committee to confer with Thomas Iron Company for the purchase of land near the present Reservoir Park where springs were present. The committee was also empowered to secure the right of way from property holders for the laying of the mains. Council set August 18 as the day for the citizens to vote on a proposed water system at an estimated cost of $15,000. The electorate showed their approval by a vote of 84-30; however, a state law limiting the sale of bonds at 2 per cent to only $7,000 slowed up the project considerably.

When a newly elected borough council was sworn in during early March of 1897, the project received immediate attention. Council inspected water plants at Perkasie and Sellersville, and in April appointed a civil engineer to take charge of preliminary planning. By the end of the year the planning stage was reached and council again decided to put the issue before the people. The public interest had not waned and on February 16, 1898, they endorsed the issue by a vote of 143-29. Immediately after this two acres of land was purchased from the iron company, bonds for the water works were offered for public sale and, shortly thereafter, work was begun. It is interesting to know that our water shed has grown from those two acres of land to its present size of approximately 600 acres.

Now that men and water were available, one additional ingredient was needed–equipment. Only weeks after the formation of the company, Chief Keller was successful in having borough council secure a hook and ladder truck from Center Valley. On January 11, 1899, the first piece of equipment arrived in the form of a two-wheeled handsomely painted and striped hose cart which cost $183. Its arrival was made known to the townspeople by the ringing of its gong as it was drawn through town to its quarters. Later, in 1908, a chemical truck with two fifty-gallon chemical tanks mounted on it was purchased. All three of these early pieces were drawn by hand.

With an increase in both size and population by 1919, it became necessary to have better fire-fighting apparatus. A campaign for funds to purchase a motor-driven truck was started which included public subscription plus a series of carnivals, picnics and ball games. In November of the same year a combination pumper, chemical and ladder Howe-Dodge fire engine was purchased for $5,000. This first piece of motorized equipment was put into use in March of 1920. In the following decades that have passed since the acquisition of that first motorized truck, the Deweys have constantly maintained adequate fire fighting apparatus and today are equipped with three pumpers, one aerial ladder truck, a rescue truck and the community ambulance. 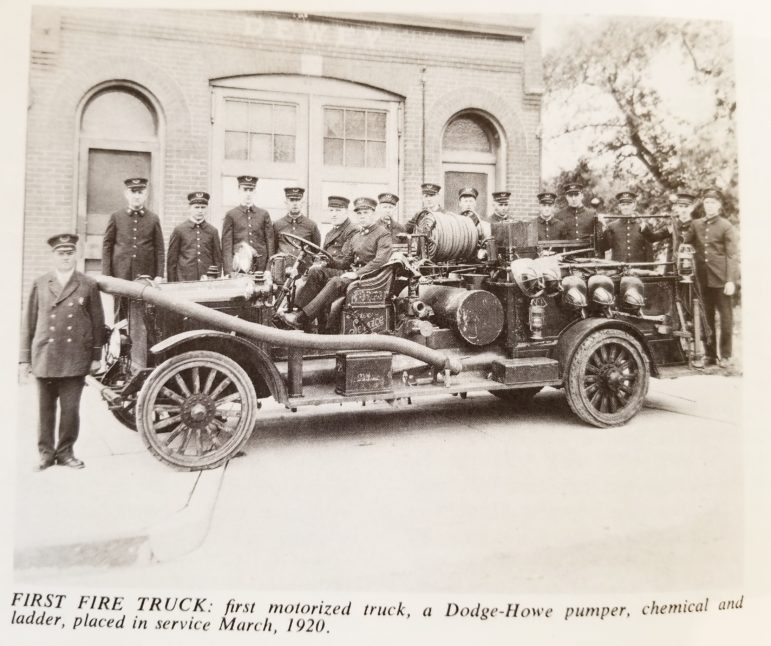 Dewey Fire Company No. 1 firefighters stand proudly outside what was then their fire station on E. Saucon Street, next to the company’s first motorized fire truck, which was delivered in March 1920.

A proper meeting, working, and storage area was needed for the growing company. Early meetings were held in the I.O.O.F. building; however, in 1900 the Borough erected a $4,000 combination fire house, police station, council meeting room and jail on Saucon Street. Hellertown’s new red-shirted brigade dug the cellar, carted away the surplus ground and brought in the stone for the mason work gratis. This new building was accepted from the contractor by council on January 8, 1901, and became headquarters for the firemen for over fifty years. When, in 1926, it became necessary to purchase another truck to provide adequate town and outlying area protection a double bay storage area was added to it. In 1940, when borough facilities were moved to the present town hall, the Dewey Fire Company was given use of the entire building. 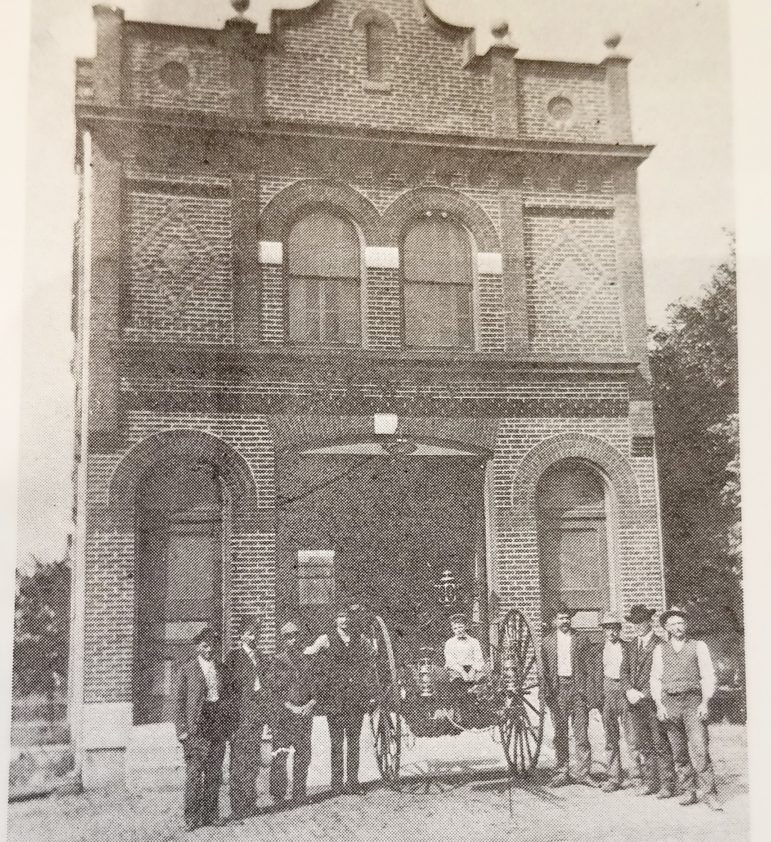 Hellertown’s first fire station was built in the year 1900 and for a time also housed the police department, borough council meeting room and jail. The building was in use by Dewey Fire Company until 1955, when the current station opened on Durham Street. Today this building still stands on E. Saucon Street, although its appearance has been much altered over the years.

Following World War II, the unprecedented growth of the borough, together with the limited facilities of the structure, necessitated the Deweys to look for new and larger quarters. After a great deal of hard work toward enlarging the building fund, the fruits of their labor wer realized when on July 3, 1955, the present modern building was dedicated. Only seven years later (November 17, 1962) the mortgage on the $120,000 building was burned. It was one fire that all thoroughly enjoyed. 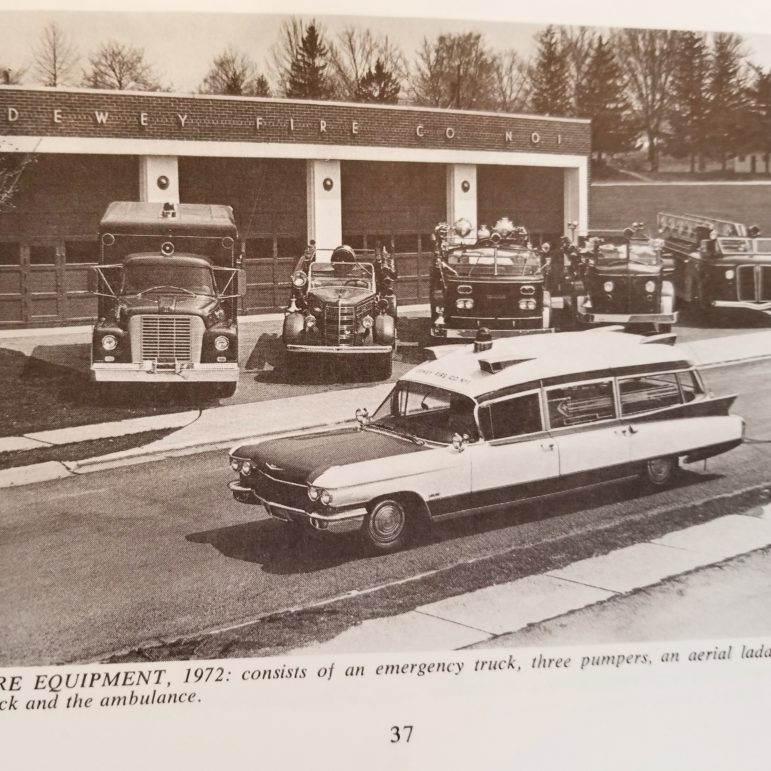 The current Dewey Fire Company building–pictured in 1972, with an array of vehicles on display–is located on Durham Street and was built in 1955. It houses a social club, banquet facilities and the station.