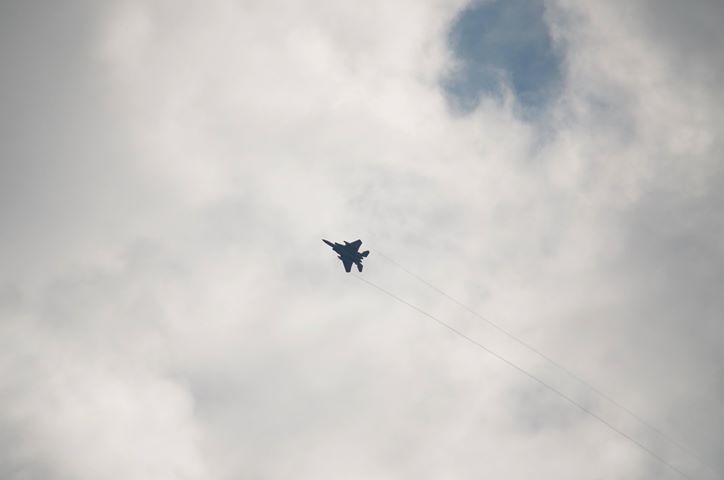 A Saucon Valley resident snapped this photo of a military jet flying high over the area Saturday morning.

A Saucon Valley resident snapped this photo of a military jet flying high over the area Saturday morning.

“What was that military jet doing above my house?” seems to be the question of the day in much of Hellertown and Lower Saucon Township.

Since military aviation information is classified one can only speculate as to why they may be in the area, but there are several theories, one or all of which may be the reason for the flyovers.

The most likely reason for the jets being in the air is that they are enforcing a ‘no-fly zone’ radius of 30 nautical miles while U.S. President Donald Trump visits his home in Bedminster, N.J., this weekend.

The no-fly zone radius extends into extreme eastern Pennsylvania, ending between Bethlehem and Easton, approximately in the area of Hellertown.

Trump’s weekend visit may include playing rounds of golf at the course he owns in Bedminster, according to published reports.

Another possible reason for military jets being seen or heard overhead are the NASCAR races at Pocono Raceway in Long Pond this weekend.

A flyover at the raceway is scheduled to be held at an undetermined time Sunday, according to an ESPN article.

Lastly, there is an Air National Guard troop stationed at Lehigh Valley International Airport in nearby Hanover Township, Lehigh County, which conducts training exercises from time to time.

After a military plane conducted a low nighttime flyover of Hellertown while performing an exercise in February, numerous residents contacted local TV station Channel 69 News to ask why the flyover had occurred.

Lehigh-Northampton Airport Authority spokesman Colin Riccobon told the TV station that military planes routinely conduct flight exercises in the area, although he said such exercises are usually conducted during the day.