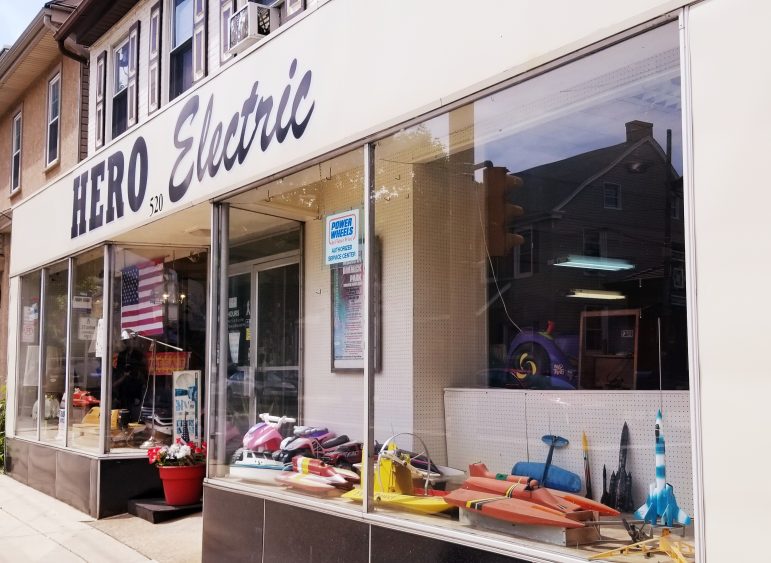 Hero Electric has been a part of downtown Hellertown since December 1964.

Even if you’ve never shopped there, you likely know where Hero Electric is located because of its large, painted sign at the intersection of Main and Penn streets and its large window displays–particularly its vintage Christmas display, which has become a part of Hellertown holiday tradition.

That tradition is about to end, as owners Bob and Victoria Hero have sold their property at 520 Main Street and are now preparing to liquidate the contents of the store at an on-site, soup-to-nuts auction that will be held Thursday, Aug. 30 at 10 a.m., with a preview beginning at 9 a.m. 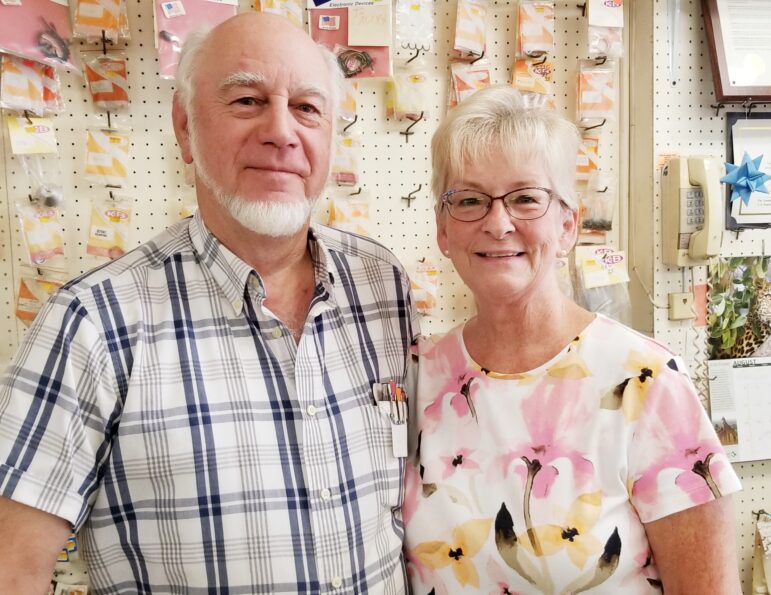 Robert and Victoria Hero are retiring as well as selling the property they have owned since 1993.

The auctioneer is Michael Goepfert of Richland Auction Hall, Quakertown. Photos of some of the items that will be available to bid on can be found online at AuctionZip.com.

Selling their historic building–which includes an upstairs apartment–is bittersweet, the Heros said. But the retail marketplace for appliances and hobby supplies–once the business’s mainstays–has drastically changed since the store opened in its current location nearly 54 years ago.

Back then it was owned by Bob Hero’s father and mother, who founded the store and remained active in running the business into the late 1980s and early 1990s, respectively.

Bob Hero explained that the business was originally located on Fourth Street in South Bethlehem–where it opened in 1954–and moved to Hellertown because the Main Street location was closer to their family home in Lower Saucon Township.

Bob, who was in 10th grade at the time of the big move, shared photos of the opening of the store during the 1964 Christmas season, in which large cardboard boxes containing new appliances can be seen lining a snowy sidewalk out front. 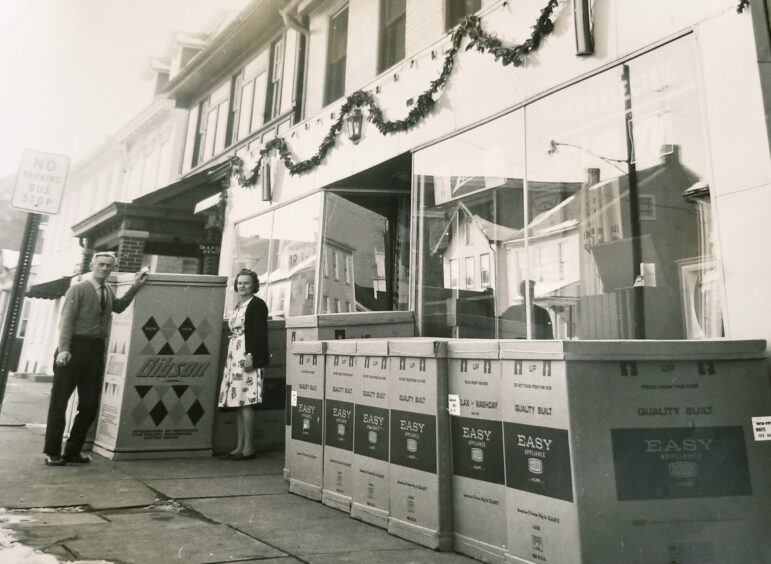 This photograph shows Hero Electric in Hellertown around the time of its opening in December 1964. 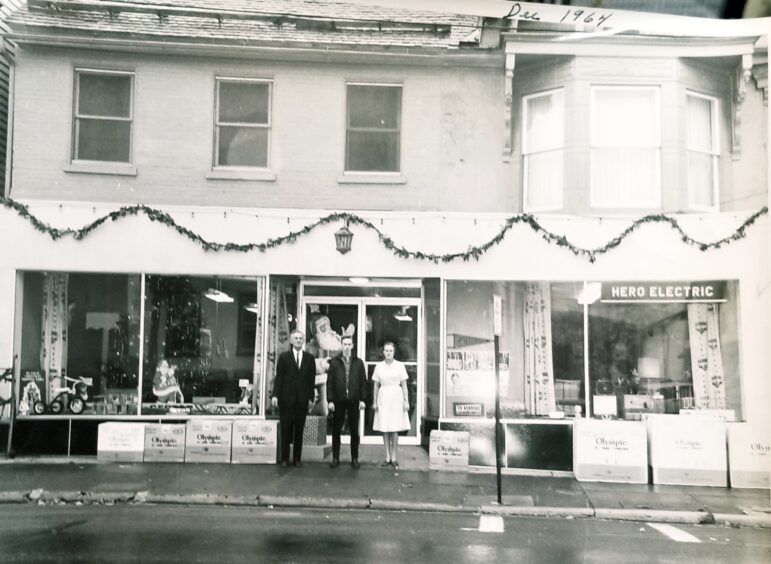 Bob Hero (center) was in 10th grade when his parents–pictured alongside him–moved Hero Electric from its location on Fourth Street in South Bethlehem to its present location at 520 Main Street, Hellertown, in December 1964. Decorating the building’s large, plate glass display windows for Christmas has been a tradition ever since.

Over the years, as consumer buying habits changed, the focus of the business shifted from appliance sales to service and repairs, and then to hobby sales, but competition from big box stores and online retailers eventually made sustaining it at all impractical.

The loss of other retail in Hellertown borough over the years also did not help Hero Electric, which today is one of a handful of remaining retailers in the downtown area.

The property has been for sale for several years, and was sold to a buyer whose intentions for its use remain unclear. The Heros said they do not know what the new owner’s plans for the spacious building are, although he may have to share it with a ghost, Bob noted.

He said a member of the Bergstresser family–who once owned the building and operated a furniture business/funeral parlor in it in the early 1900s–is believed to possibly haunt it. 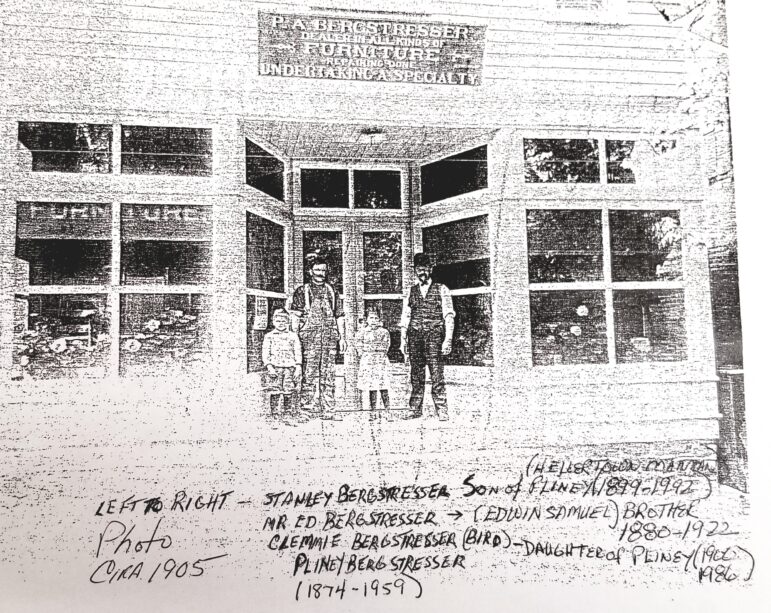 This photocopy of a circa 1905 photograph shows members of the Bergstresser family outside their furniture dealership and funeral parlor, which was located in what is today the Hero Electric building at 520 Main Street, Hellertown.

They said they plan to remain in the area, living on the property that has been owned by the Hero family for nearly a century. With them will go Roxie the cat, the store’s friendly live-in feline who’s been a constant companion to Bob and a greeter to visitors for the past five years or so. 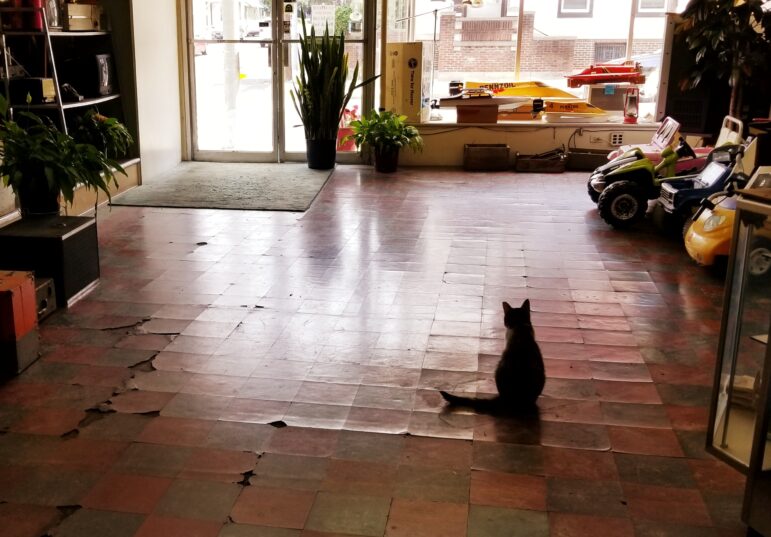 Roxie–the affectionate store cat at Hero Electric–stares out the front windows at Main Street in downtown Hellertown. Her familiar window on the world will soon change to one in Lower Saucon Township, after a new owner takes possession of the Hero Electric building at 520 Main Street in late September.

And although Bob Hero is also planning to be a less frequent attendee at Hellertown Borough Council meetings–which he has faithfully attended for years–he and Victoria will be at at least one more, to receive a proclamation from the mayor and council in recognition of their years of service to the community on Tuesday, Sept. 4.