Note: An earlier published version of this story incorrectly identified the nature of the special request being sought from the township zoning hearing board. We apologize for any inconvenience that may have caused.

If you have been wishing a gun shop would open in the Saucon Valley, you’ll likely be happy to hear that one is proposed for the Society Hill shopping plaza on Friedensville Road in Lower Saucon Township.

According to paperwork included with the Lower Saucon Township Council meeting agenda for Sept. 5, 2018, the gun shop would be operated by Lloyd Tactical, which is owned by licensed firearms dealer Brian Lloyd of Upper Saucon Township.

A letter dated June 20, 2018, describes the proposed business as one that would employ two people per day and average seven customers per day.

Per the letter, planned business transactions would include:

The letter states that non-load-bearing walls within the unit might be removed to allow for the installation of display cases, and that an alarm system along with security cameras covering the store’s stock and exits would be installed.

The building is located in the township’s Urban Residential (UR) zone.

A gun shop is considered a permitted use for the property based on a 1990 letter which describes permitted retail sales as including things like hardware or shoes “or uses that are equivalent to such uses and are no more intrusive to the neighborhood.”

Other businessses currently operating in the shopping center building include a bagel shop, a dry cleaner and a glass repair business.

The building is owned by R.M.S. Family Limited Partnership of Orwigsburg, Pa., which is being represented in seeking a special request to clarify the permitted/prohibited uses for the property by attorney Erich J. Schock of Fitzpatrick, Lentz & Bubba, P.C., of Center Valley.

The special request is for an interpretation of the 1990 letter and a September 1990 zoning hearing board decision that established the limited list of permitted uses and a list of prohibited uses, and also “to confirm that a single restaurant is permitted on site based on the pre-existing non-conforming bagel shop existing prior to the 1990 decision,” according to an Aug. 29, 2018 memo from township zoning officer Jim Young to township manager Leslie Huhn.

In accordance with township regulations, because a special exception request regarding  existing zoning has been made, the township has notified dozens of nearby homeowners, including many who live in the large Society Hill development adjacent to the plaza. 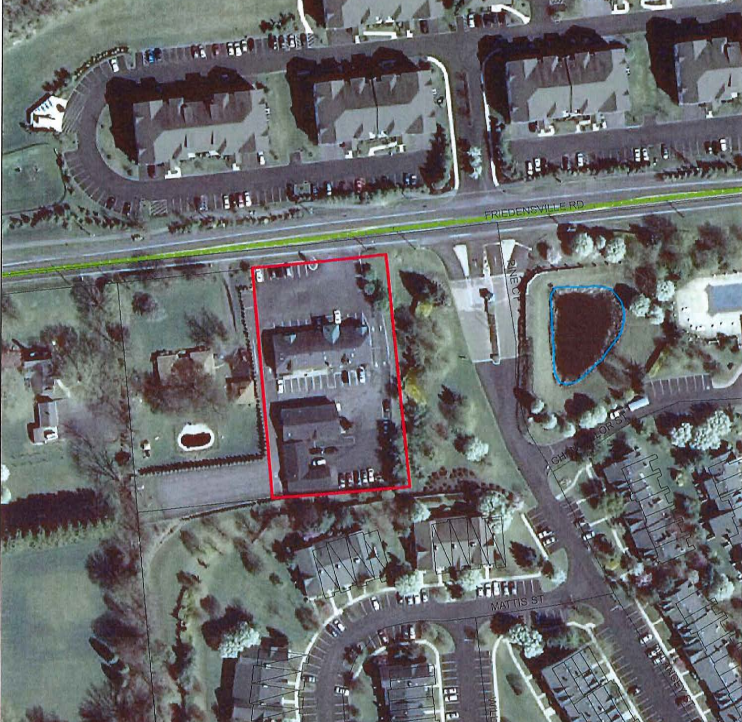 An aerial view shows the Society Hill Plaza in Lower Saucon Township outlined in red. The entrance to the Society Hill development is to the right of the plaza and Friedensville Road–which runs from east to west–is marked by the yellow line above both.