The effect of a proposal to build a 17,000 square-foot Hellertown Public Works Department maintenance building on vacant land in the middle of a borough neighborhood has been traumatic, a resident told borough council Monday night.

Bill Broun of East Saucon Street appeared before council to announce that he and other neighbors have formed an ad hoc group called Concerned Neighbors of Reinhard Field (CNRF), which met for the first time on Sunday to discuss the proposal; one which the borough decided to seek grants for last month.

The neighborhood is centered around the borough-owned lot at Northampton Street and Magnolia Road on which the Reinhard School–which was demolished in 2012–once stood. 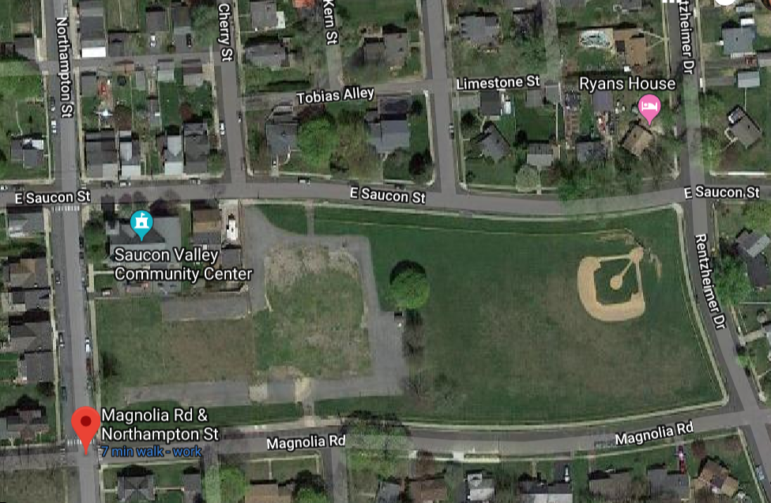 The property was purchased from the Saucon Valley School District for $1 about 15 years ago with a deed restriction that requires it only to be used for public purposes.

“We’ve developed several plans to advance and protect citizens’ interests in the neighborhood,” Broun told council. “We have no leadership and represent a diversity of perspectives. We believe in good municipal government, and we have not, by any means, given up on council either as a whole or individually.”

The main issues the group is concerned about are children’s safety, and how the structure and traffic in and out of it could affect property values, neighborhood character and quality of life, he said.

He proceeded to ask council a number of questions that were raised by attendees at the CNRF meeting Sunday.

One of the first questions asked was whether the borough had considered the Kichline property at Main, Pine and Front streets for the site of the proposed public works building.

That property was recently listed for sale and council president Tom Rieger said the borough was aware it would be coming on the market before that happened.

He noted that the property contains three different types of buildings built at different times, including a large house, a warehouse/showroom where auto parts were sold, and a garage/auto repair shop along Front Street.

“The physical nature of the (garage) building…is not very conducive to a public works facility,” Rieger said. “The structure would not work.”

The borough would also need to come up with somewhere between $1.25 and $1.5 million just to purchase the nearly 1-acre property, which renders the option to build something there “not financially viable,” Rieger said.

He added that a vacant lot at High and Whitaker streets that was once leased by the borough to provide open space and a playground for neighborhood residents is also not a viable option due to its cost.

In both cases, he noted that the borough’s use of these properties would remove them from the tax rolls, which would impact not only the borough’s budget but those of the Saucon Valley School District and the county.

“Why didn’t you talk to the neighborhood about the plan?” Broun asked.

“We were not there yet,” Rieger said.

Councilman Kevin Lott noted that the borough held an advertised special meeting at which the proposal was discussed before council voted to pursue it at a subsequent regular council meeting held Sept. 17.

The special meeting was held Sept. 11 and was advertised in The Morning Call legal notices section as well as on the borough’s website three days beforehand.

“We had a nice meeting, a very interactive meeting that time,” Lott said. “From that workshop it spreads out.”

Borough council meetings are typically held the first and third Monday of each month at 7 p.m. at Borough Hall, 685 Main St., Hellertown. Meetings are open to the public.