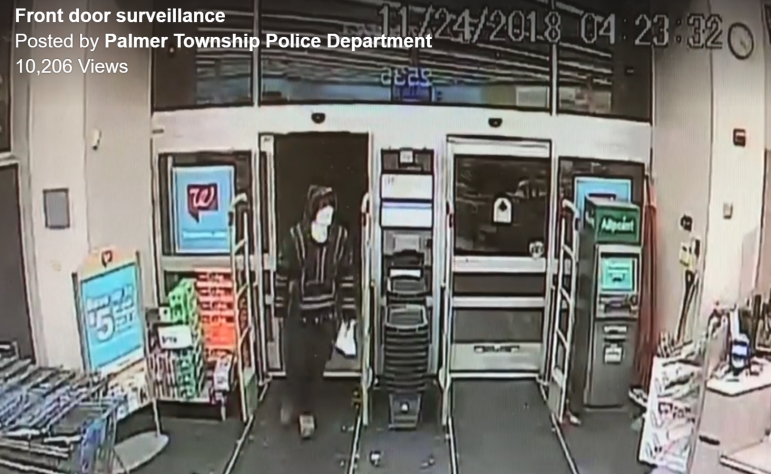 A still image taken from store surveillance footage shared by the Palmer Township Police Department on social media over the weekend allegedly shows Joseph T. Arnold Jr., 20, of Hellertown, entering a Walgreens drugstore on William Penn Highway in Palmer Township before attempting to rob it and threatening a clerk with a knife early Saturday, police say.

Editor’s Note: This story has been updated with additional information from online county court records.

A Hellertown man is facing attempted robbery and other charges after police say he allegedly used a knife to try and rob the Walgreens drugstore at 2535 William Penn Highway in Palmer Township at around 4:20 a.m. Saturday morning.

According to a WFMZ.com story published Sunday and township police, Joseph Theodore Arnold Jr., 20, allegedly entered the store, handed a cashier a note in which he demanded “everything,” threatened the employee with a folding knife and then fled the store empty-handed, running towards 25th Street.

Arnold was reportedly identified through the use of store surveillance video Palmer Township Police shared on their department’s Facebook page, where police said “investigations and interviews throughout Saturday evening resulted in an arrest.”

He was subsequently committed to Northampton County Prison in lieu of $200,000 straight bail, which had not been posted as of Monday, according to court records.

A preliminary hearing in Arnold’s case is scheduled to be held before District Judge Jacqueline Taschner on Monday, Dec. 10 at 9 a.m.