A mother of school-age children–frustrated with the failure of drivers to stop for one of them as she attempted to cross Hellertown’s Main Street (Rt. 412) in front of their home–has shared a video of the incident with Saucon Source.

In it, nearly 60 vehicles–including a school bus–can be seen driving through the crosswalk as Saucon Valley seventh-grader Lily Walser stands on the west side of Main Street (Rt. 412) waiting to cross after purchasing several bottles of iced tea at a convenience store Monday afternoon.

The crosswalk is located at the intersection of Main Street and Wagner Avenue at the north end of town, and as she begins filming a frustrated Rebecca Walser says, “This is why we’re moving. No one stops. Not school buses, not cops. Nobody.”

“Look at that. The school bus doesn’t even (expletive) stop,” says Walser, who filmed the video from the front porch of her home in the 1500 block of Main Street, where her family has lived for a decade. 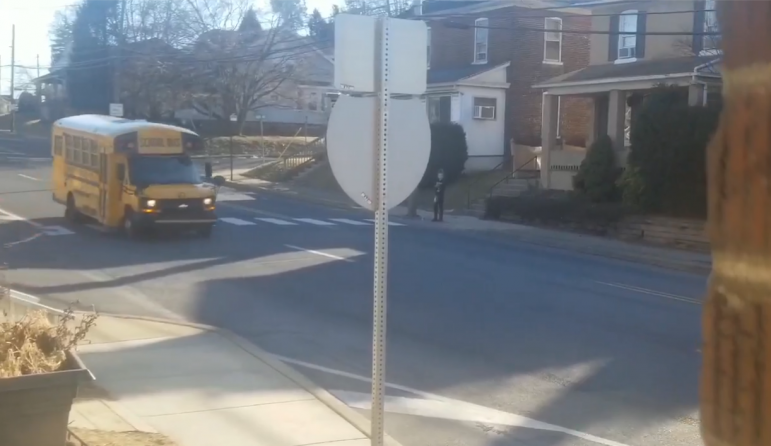 Lily Walser waits to cross at a crosswalk at Main Street and Wagner Avenue in Hellertown Thursday afternoon.

“She was standing there for almost a minute before I started filming,” she told Saucon Source.

“It’s not even as if we never spoke to the borough about this. We did, and all they did was post a pedestrian crossing sign up a couple years ago,” she added.

According to Walser, she and her husband “asked (borough officials) to make it safe to cross at the crosswalks, and were told they would install signs, which they did.”

Walser said that was during the Rt. 412 widening project several years ago.

“I get that they probably think it’s not that busy of a crosswalk, but it is,” she continued. “There’s LANTA bus stops on either side and people in the neighborhood use it daily to get to TopStar as well.”

To address pedestrian safety issues, Hellertown borough officials have applied for and received grants to help pay for improvements at several intersections closer to the center of town, including pedestrian-activated crossing signals–one of which was installed at the Water Street rail trail crossing last year–as well as so-called ‘Take It to Make It’ fluorescent orange flags, which are available to help make pedestrians more visible as they cross as intersections such as Main Street and Hampton Avenue.

Referring to those flags, Walser says in the video, “I’m so glad the borough has flags all the way up in the middle of Hellertown, for people to cross, because nobody needs to cross the street down here, next to the (expletive) highway.”

She later told Saucon Source, “I don’t expect the borough to do anything more than what they’ve done for the other crosswalks in town, and put flags out for pedestrians. They can do at least that.”

She said her daughter is old enough to know how to safely cross Main Street, and was forced to learn how to cross a busy street at a relatively young age because of where they live.

Main Street is a state route which means it is managed by the Pennsylvania Department of Transportation, and the borough must get PennDOT approval to make changes along it, including safety-related changes.

Pennsylania’s pedestrian safety law (Title 75) as it pertains to the rights of pedestrians in crosswalks is as follows:

(a)  General rule. When traffic-control signals are not in place or not in operation, the driver of a vehicle shall yield the right-of-way to a pedestrian crossing the roadway within any marked crosswalk or within any unmarked crosswalk at an intersection.

(b)  Exercise of care by pedestrian. No pedestrian shall suddenly leave a curb or other place of safety and walk or run into the path of a vehicle which is so close as to constitute a hazard.

(c)  Limitation on vehicles passing. Whenever any vehicle is stopped at any crosswalk at an intersection or at any marked crosswalk to permit a pedestrian to cross the roadway, the driver of any other vehicle approaching from the rear shall not overtake and pass the stopped vehicle.

(d)  Application of section. Subsection (a) does not apply under the conditions stated in section 3543(b) (relating to pedestrians crossing at other than crosswalks).

(e)  Penalties. The driver of a vehicle who violates subsection (a) commits a summary offense and shall, upon conviction, be sentenced to pay a fine of $50.

“It’s sad, because TopStar is hugely popular for the local cops to sit at, and also catch people speeding past, yet they just watch us struggle to cross and do nothing, or ignore us themselves,” said Walser, referring to the convenience store and gas station across the street. “I can’t expect normal people to stop for me if even the cops don’t.”

She added that she has submitted a “crosswalk concern” to PennDOT for their review as a result of Monday’s incident involving her daughter.

Information about pedestrian safety can be found on PennDOT’s website.

Tell us: Have you ever had a hard time crossing Main Street in Hellertown? As a motorist do you agree or disagree with efforts the borough has undertaken to help improve pedestrian safety on Main Street?

Please note that the video below contains strong language and listener discretion is advised.