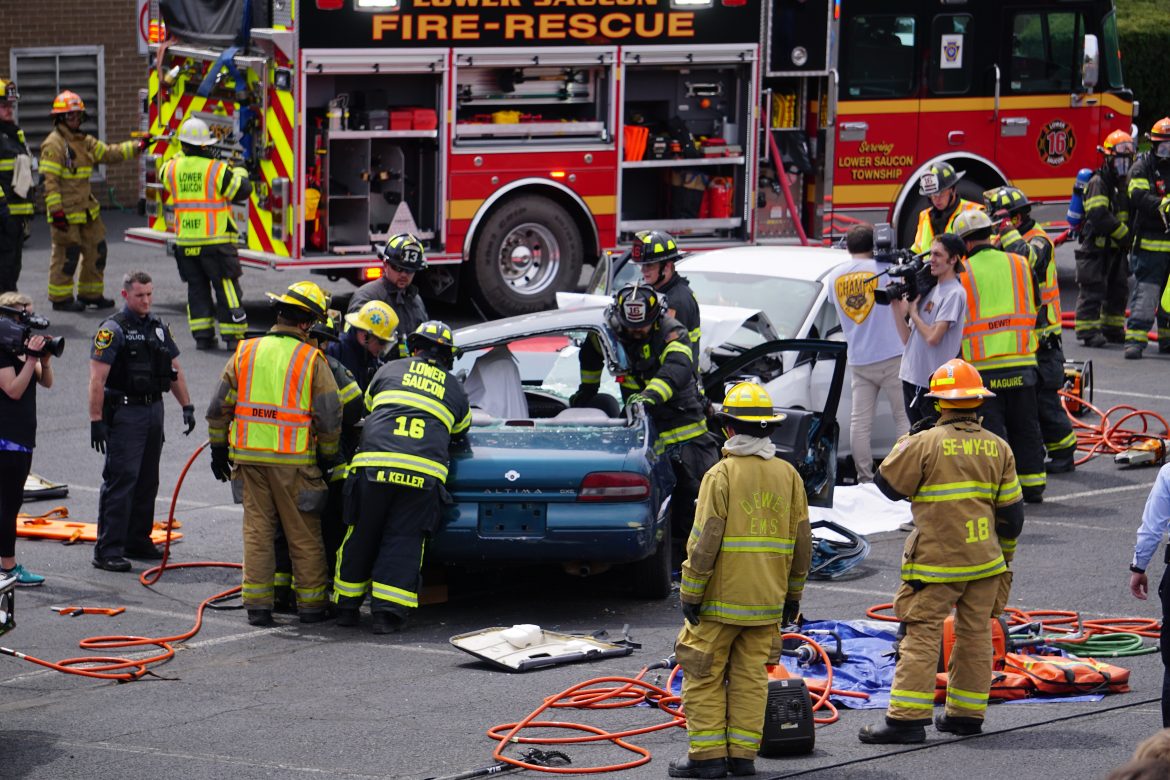 Saucon Valley area first responders work to extricate a passenger from the simulated wreckage in the high school parking lot.

NOTE: In anticipation of Saucon Valley High School’s 2019 Junior/Senior Prom Friday night, the school district authorized the staging of a pre-Prom mock car crash and funeral service by the SVHS SADD (Students Against Destructive Decisions) chapter in conjunction with Saucon Valley Athletics. If you find the content and photos in this story uncomfortable and even frightening, they have had their desired effect. Keep in mind that this was only a simulation, held with the purpose of motivating students to make good choices. A mock crash is an awareness tool. It informs students of the possible future consequences of poor decisions in a way that only a graphic, first-hand experience can do. Impaired driving and distracted claim thousands of young lives each year. Students as well as adults need to make responsible choices before and while driving. And, we all need to understand that there are sometimes very serious consequences connected to our choices.

At about 12:50 p.m. on what was a beautiful Tuesday afternoon all seemed well with the world. At about 12:51 p.m., absolute ugliness began to wash away the beauty. There was a fatal crash in the Saucon Valley High School parking lot. Two cars collided head-on and all of hell broke loose. 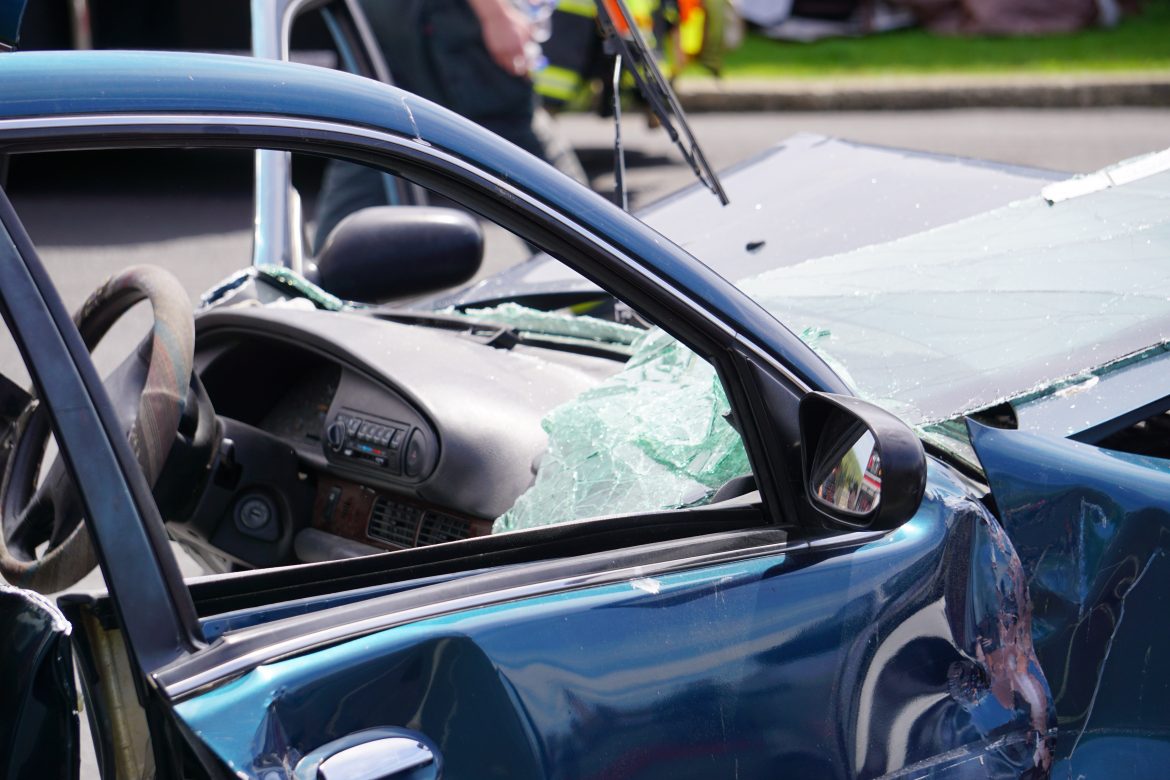 Two cars collided in the high school parking lot Tuesday. The wreck had a ripple effect throughout the Saucon Valley community.

Frantically, a couple of Saucon Valley student-witnesses called 911 and first responders were dispatched to the scene. Slowly and painfully, some of the eight riders, most bloody and bruised, began to emerge from their respective cars. Other passengers were trapped in the wreckage, unconscious or incapacitated. One of the students was evidently ejected from a vehicle and laid motionless, face down on the parking lot pavement. 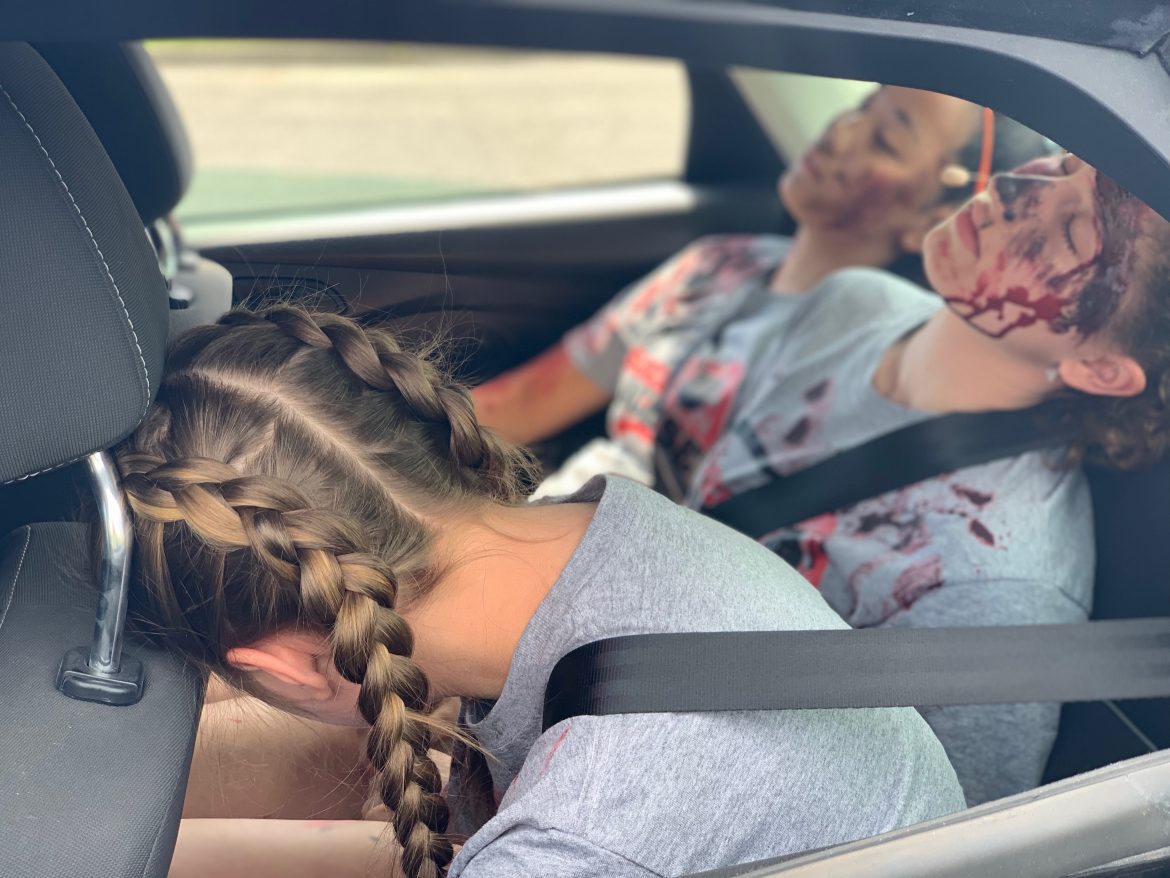 Salome Carr, Maria Donahue and Megan Kane were three Saucon Valley students in urgent need of medical attention after being involved in a simulated head-on collision.

A Lower Saucon Township police car was first on the scene and in no time a variety of emergency vehicles, including ambulances and a fire truck with lights flashing, filled the high school’s north-side parking lot. Dozens of first responders jumped out of their vehicles to begin their life-saving work. Lingering in the background of the chaotic action could be heard the desperate, pleading voice of Brooke Riefenstahl asking her sister Kiele to wake up. “Somebody help my sister!” Brooke cried out. 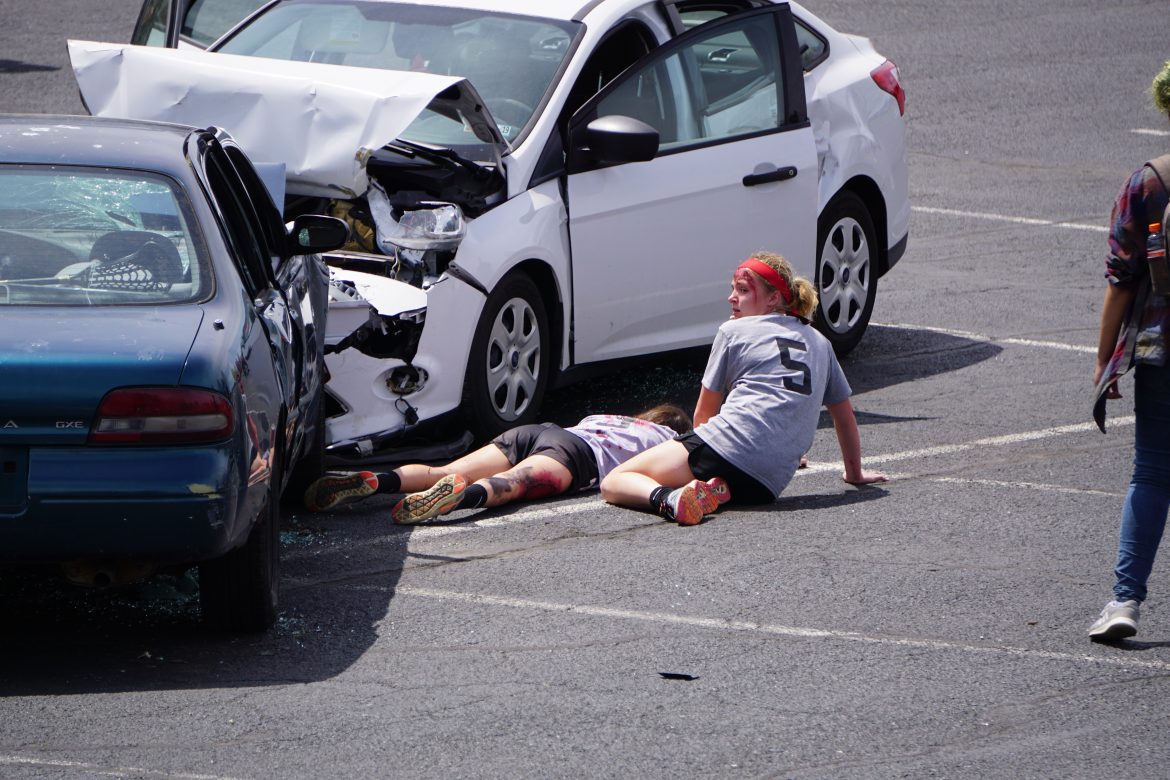 Brooke Riefenstahl anxiously looks for someone to help her sister Kiele, who was ejected through the windshield of one of the vehicles.

Senior Jenna Skillinge, who was the driver of one of the cars, suffered a serious back injury and needed emergency aid to be removed from her vehicle. Meanwhile, Megan Kane, who was a passenger in the other car driven by senior Tim Weaver, was unconscious and quickly loaded into an ambulance after being extricated by first responders. In all, six Saucon Valley students were rushed to the hospital. 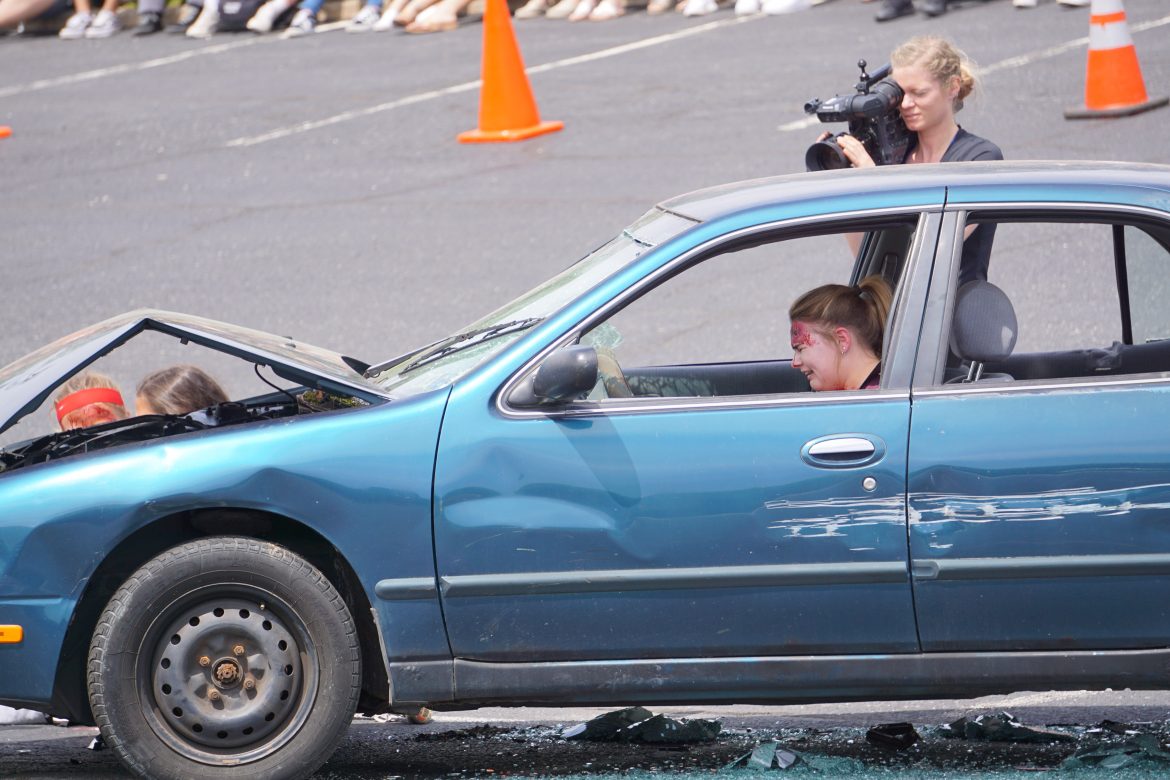 As much as Jenna Skillinge wanted to exit her vehicle, a serious back injury suffered during the simulated collision prevented her from doing so. 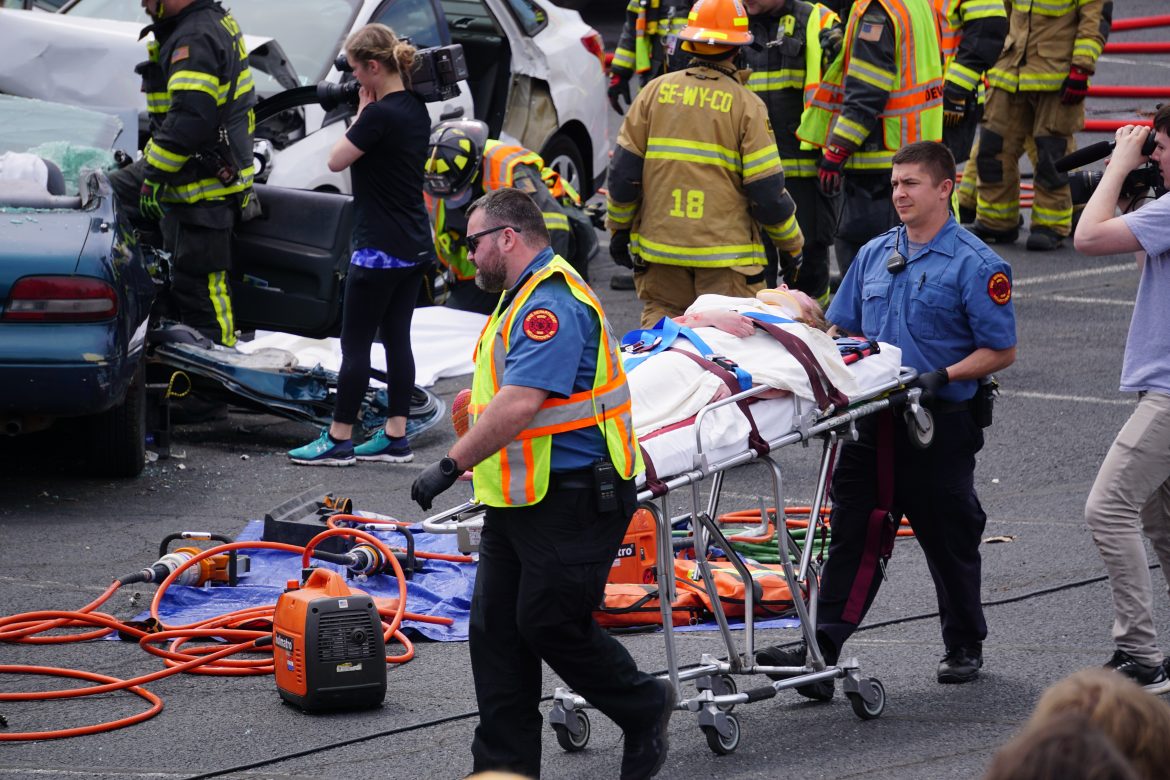 Sophomore Megan Kane was unconscious but still breathing when she was loaded into the ambulance during the SADD simulation.

In the simulation Tim Weaver was at home playing video games and drinking alcohol with classmate Curtis Clifford. While they were partying, Tim received a text from his cousin, Salome Carr, requesting a ride to the school for a lacrosse game. A few minutes later, Carr, along with teammates Maria Donahue and Megan Kane, hopped into Weaver’s vehicle while he was under the influence of alcohol. 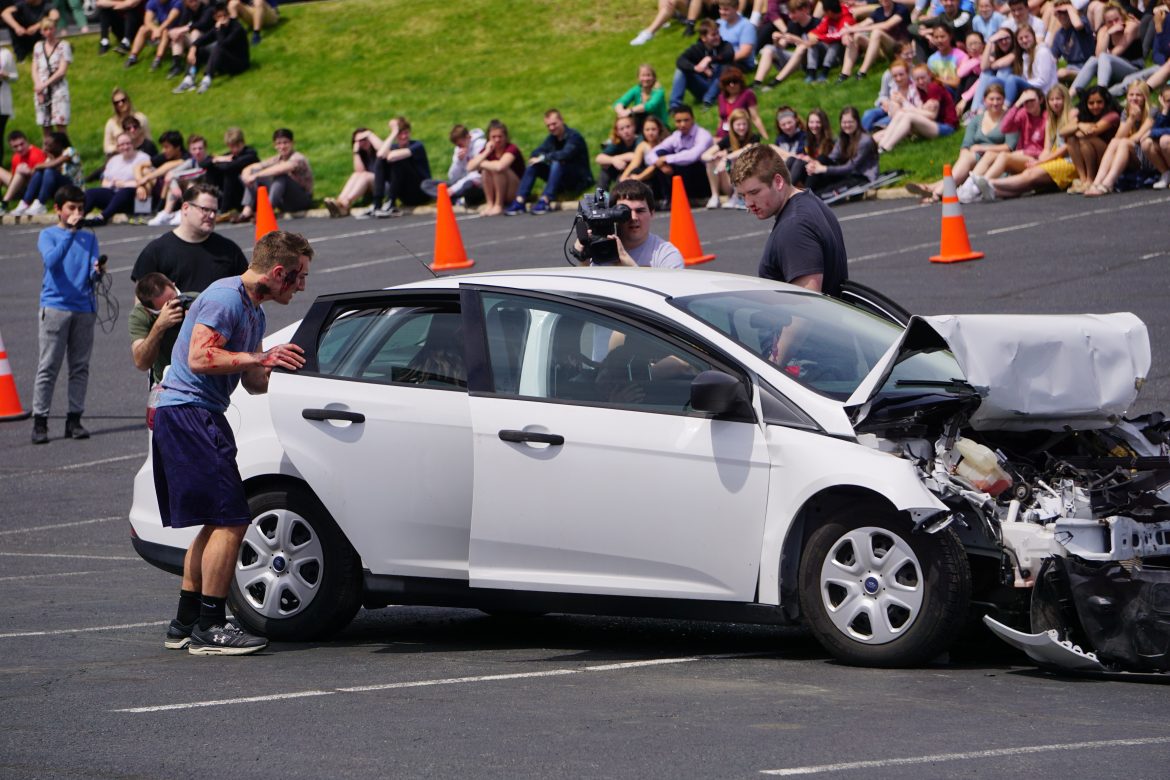 Driver Tim Weaver and front seat passenger Curtis Clifford check on the well-being of their backseat passengers after the simulated collision. 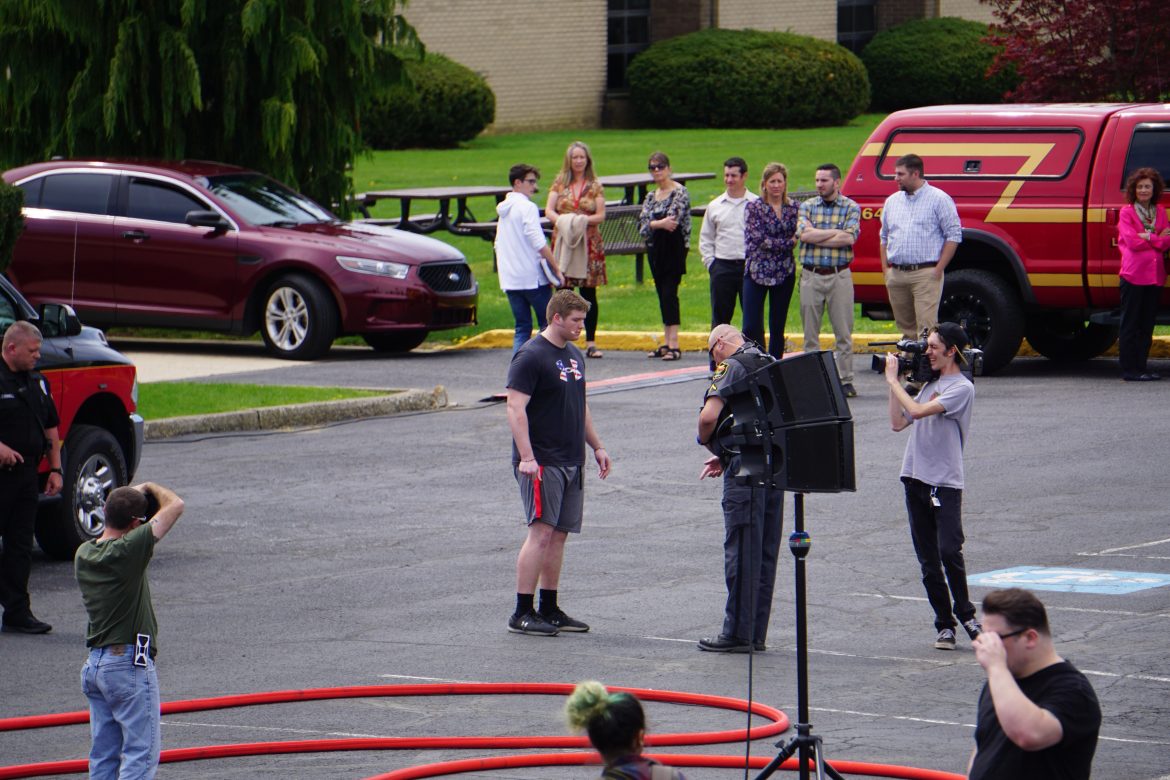 Senior Tim Weaver is given a simulated series of field sobriety tests following his accident. 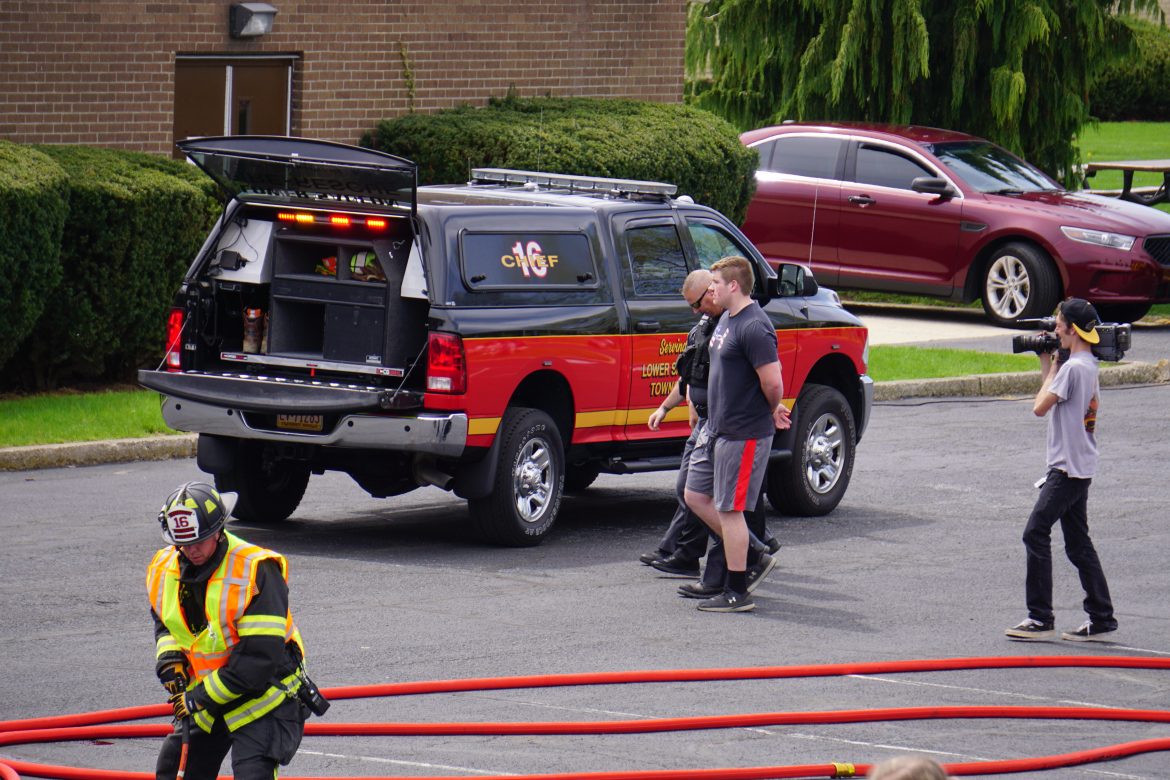 After failing the simulated sobriety tests, Tim Weaver was arrested for DUI and taken away in handcuffs, as part of the staged event.

Sadly, a call was made from the scene to the Northampton County Coroner’s office. In the simulation, Kiele Riefenstahl had been declared dead on location. Moments later Kiele’s parents ran onto the scene to see their daughter’s lifeless body under a sheet amongst the twisted metal and broken glass. The coroner shared with the Riefenstahls the dreadful news that their daughter was dead. Kiele’s body was then placed in a body bag, loaded into a Heintzelman Funeral Home hearse and driven away. 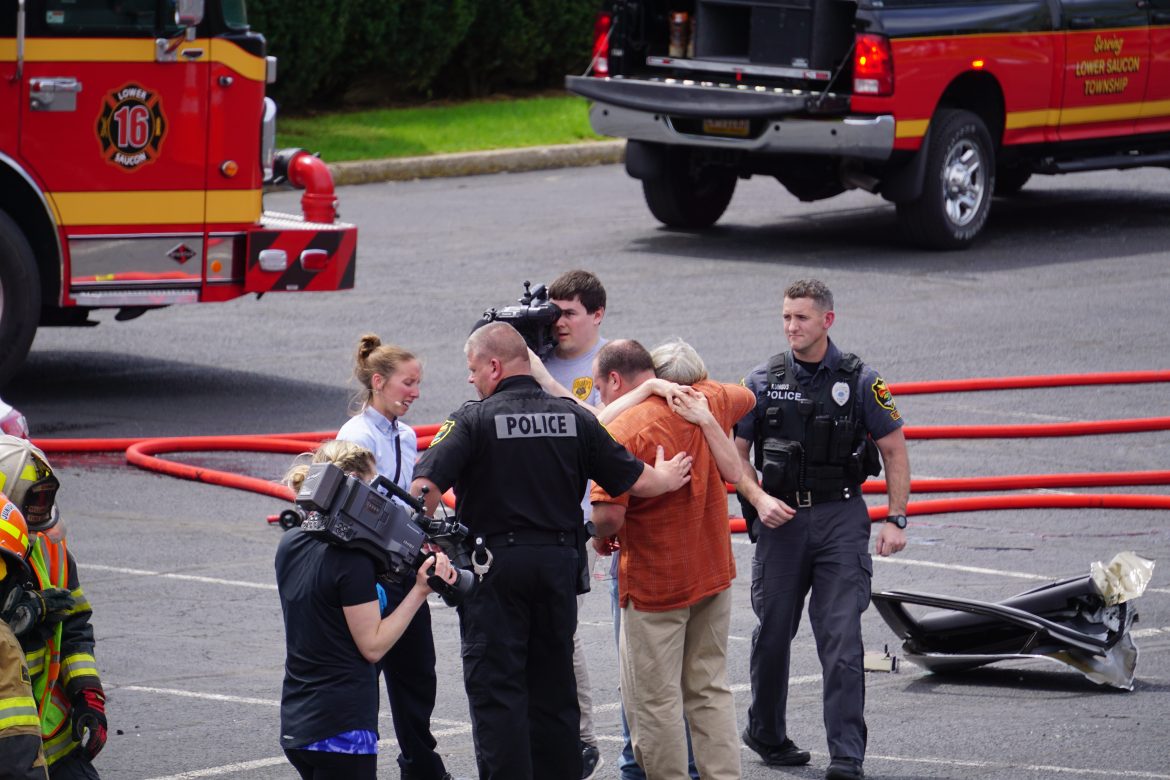 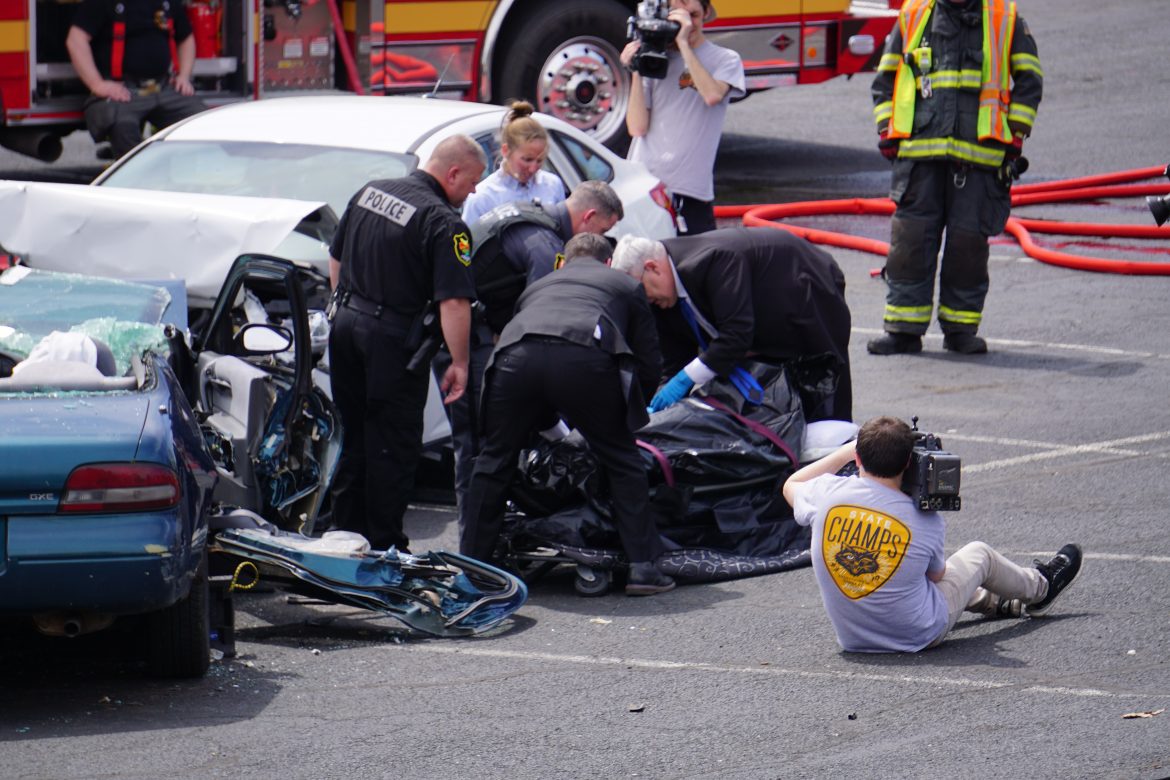 Kiele Riefenstahl’s lifeless body was zipped up into a body bag and taken away to Heintzelman Funeral Home in Hellertown. Pictured at right is funeral director/supervisor David Heintzelman. 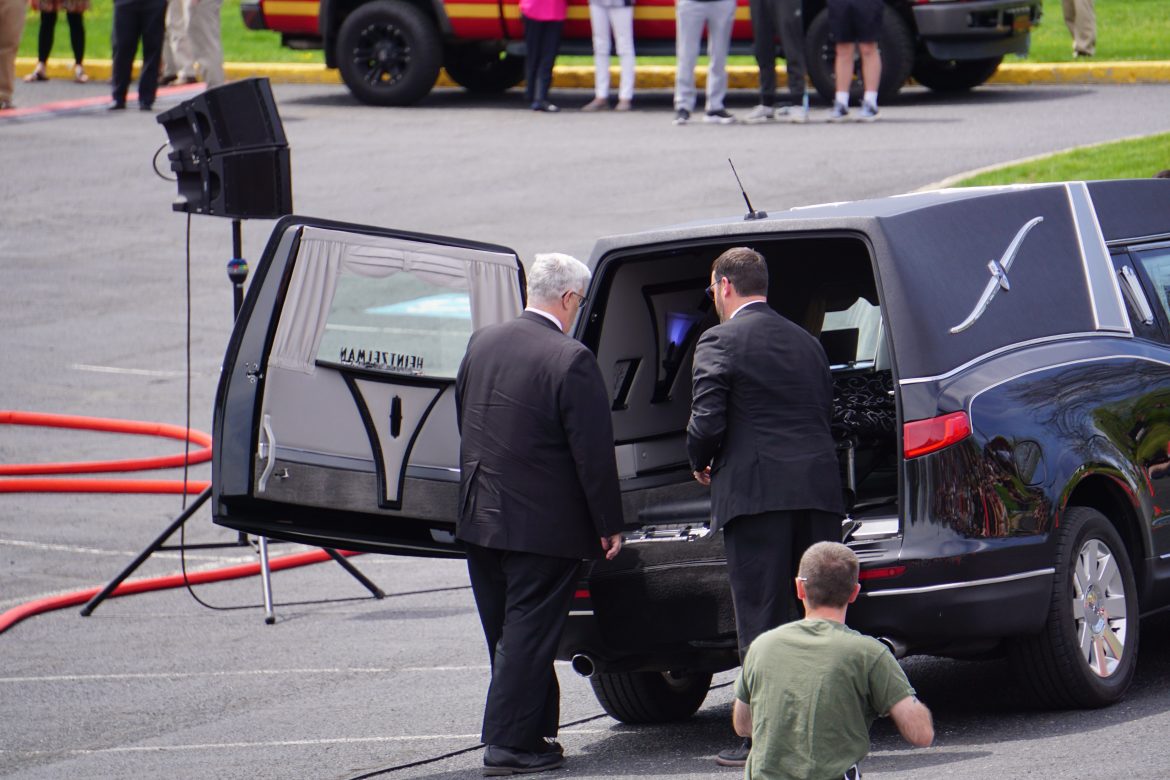 Saying goodbye to a friend, sister, daughter and teammate.

On Wednesday morning, Saucon Valley High School’s auditorium was packed with students and some parents. The stage was set with a couple of caskets to simulate the funeral services for Kiele Riefenstahl and Megan Kane. In the simulation, Riefenstahl was declared dead at the scene while attempts to keep Kane alive at St. Luke’s were unsuccessful. 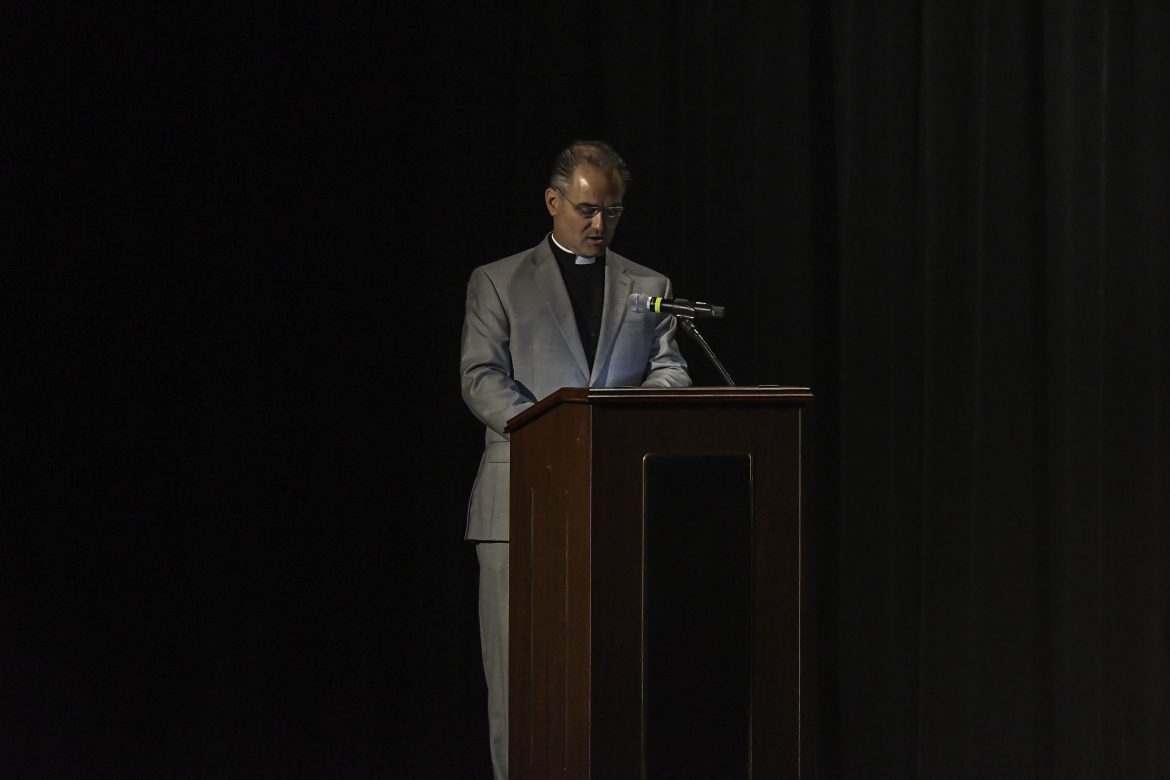 Pastor Phil Spohn from Christ Lutheran Church in Hellertown officiated the service, at which a video was shared that summarized the events that led up to the crash. The video revealed that Tim Weaver and Curtis Clifford were indeed drinking prior to giving the girls a ride to the school. There was also footage of Jenna Skillenge picking up Brooke and Kiele Riefenstahl to give them a ride to campus just prior to the accident. 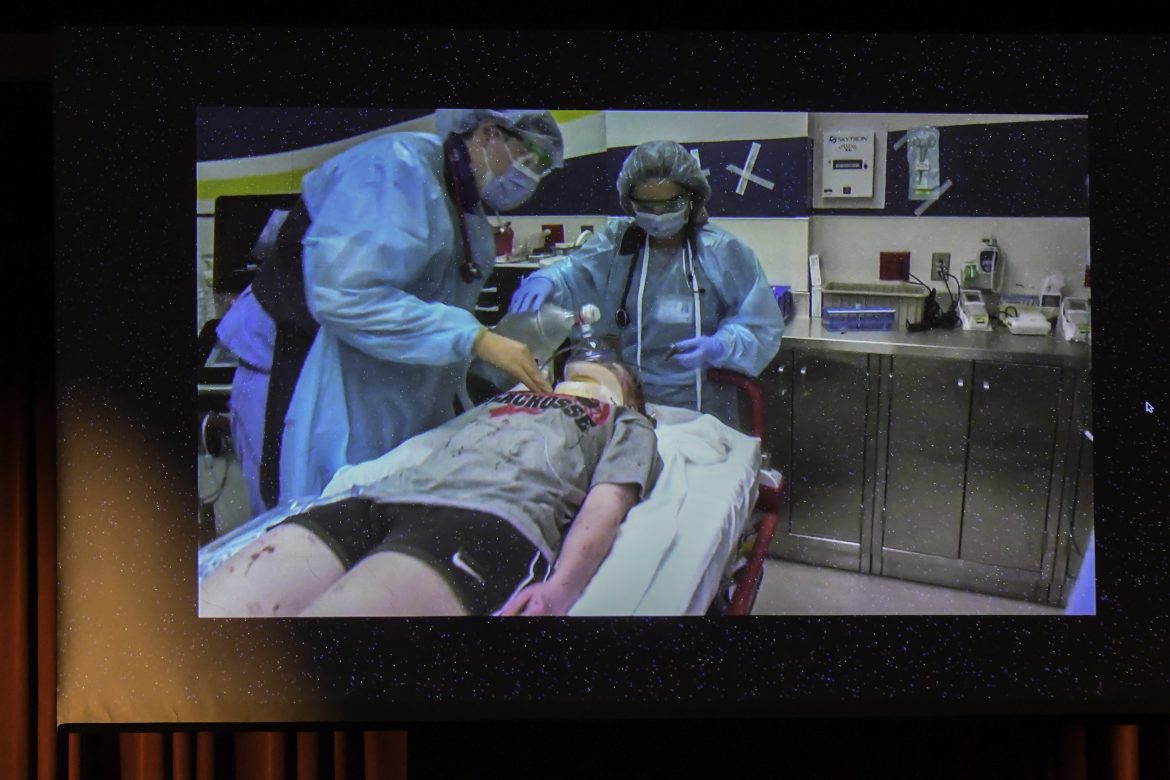 Video shot on site at St. Luke’s University Hospital showed doctors frantically trying to save Megan Kane’s life. There was also video from St. Luke’s which revealed that Jenna Skillinge was paralyzed and showed her being rushed into surgery. Another segment featured Megan Kane’s mother, Karen, being informed by St. Luke’s medical staff that Megan had died. Finally, a video segment showed Tim Weaver handcuffed and wearing an orange prison jumpsuit in a courtroom at the Northampton County Courthouse where he was fined and sentenced to 15 to 30 years in state prison by Judge Craig A. Dally. Tim’s parents and little brother Sammy solemnly watched him receive his punishment from the courtroom gallery. 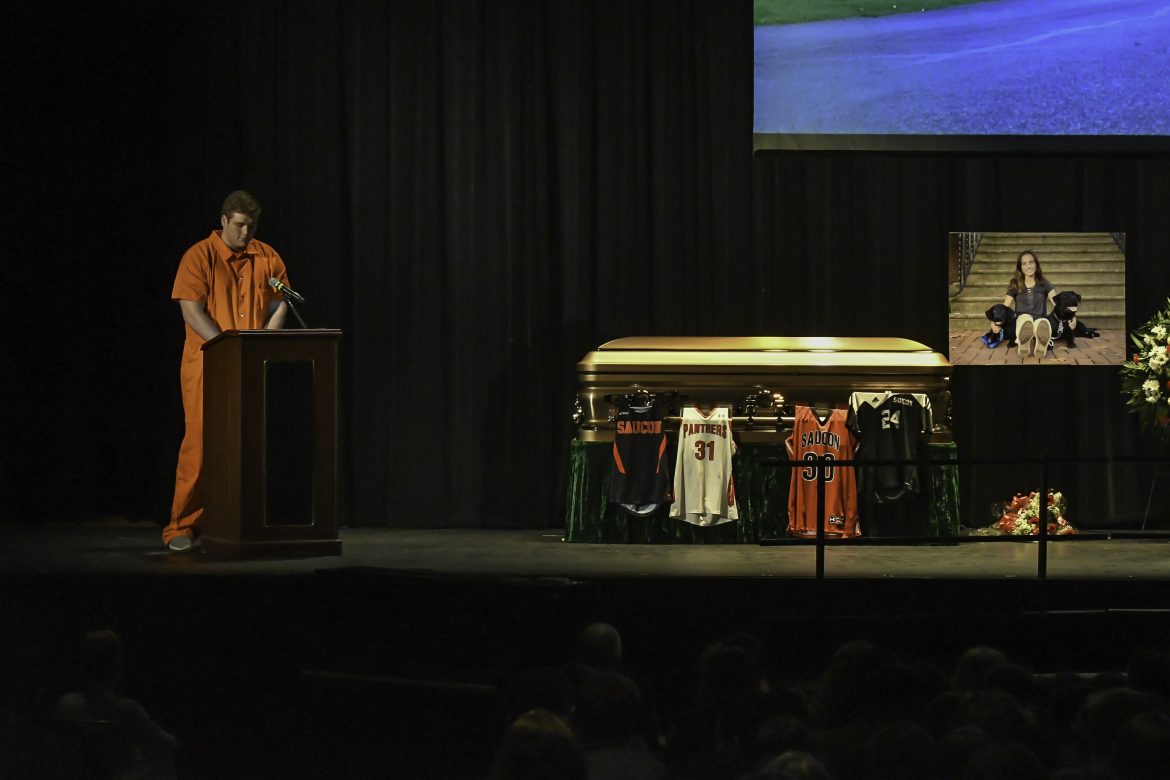 While handcuffed and wearing his prison garb, Tim Weaver regretfully admitted making a life-altering mistake that impacted many friends and families.

Following the video, Pastor Phil eulogized both Kiele and Megan by sharing some sweet remembrances of the teens. He read an obituary for each victim. Each girl then narrated a slideshow in which she reflected upon and thanked those who impacted her life, before telling them how much they would be missed. 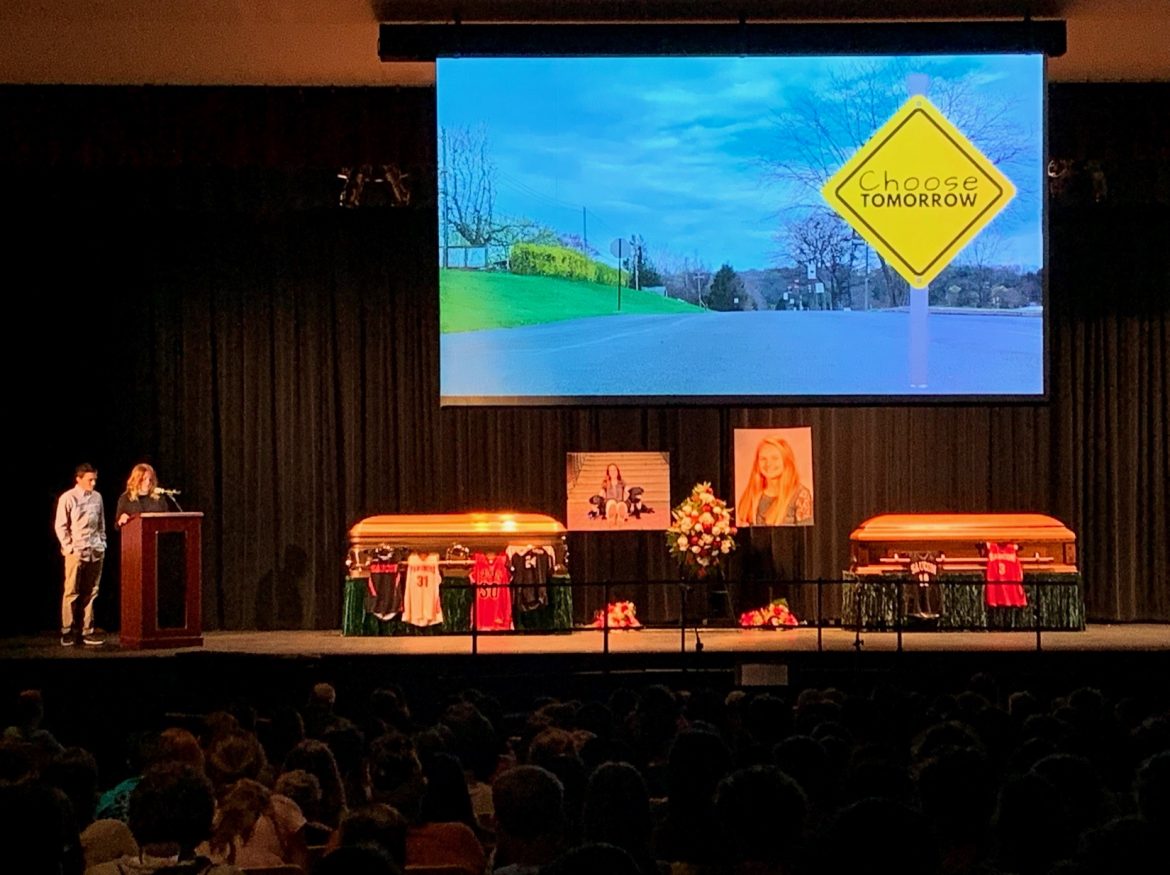 Siblings of one of the deceased students, Kiele Riefenstahl, deliver their sister’s eulogy in the SVHS auditorium.

Kiele’s twin sister Brooke and younger brother Travis then took the stage and provided Kiele’s eulogy. Megan’s father, Paul, paid tribute to Megan on behalf of the Kane family, while many in the audience were overcome with tears. 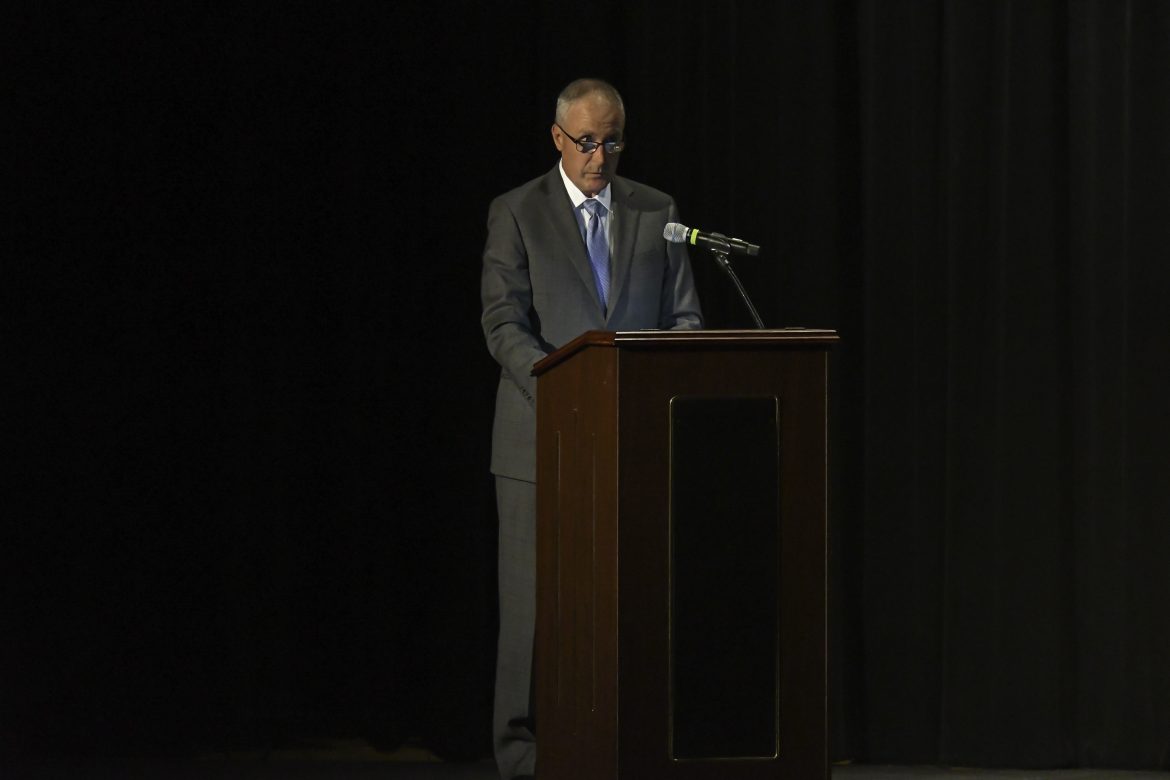 During the simulation, Paul Kane shared with the Saucon Valley community how special his daughter Megan was.

After the eulogies, Josh Knipe from St. Luke’s Trauma Center took the podium and made an emotional appeal for the students to consider the consequences and make the correct choices. He stated that his job exposes him to many parents’ worst nightmares that are in fact real. Knipe offered that he’d be mad at his own children if they called in the middle of the night and needed a ride because of underage drinking. But, he emphasized that their correct choice in making that late night call certainly outweighs any deadly alternative. 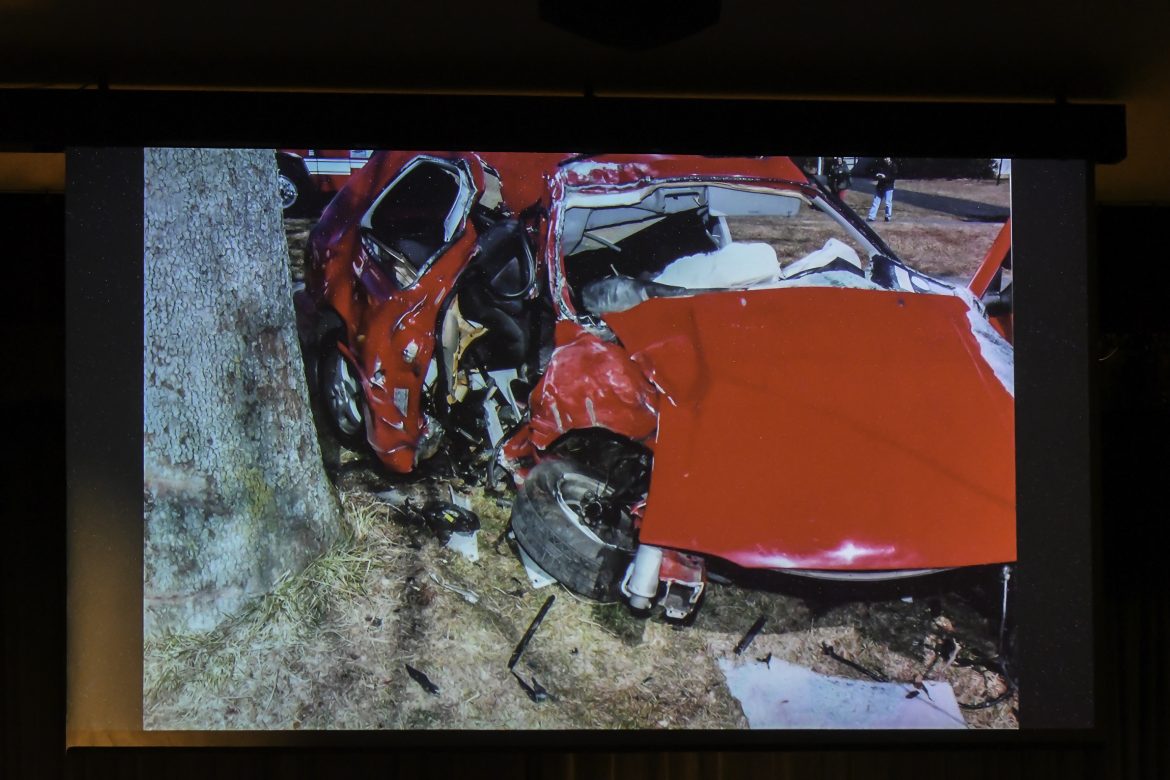 Following Knipe’s plea for the students to carefully consider their choices, Terry Houck from the Northampton County’s District Attorney’s Office recounted a real-life story involving drunk driving and teenagers from 2006. The teen in Houck’s case was ultimately found to be responsible for the deaths of two Easton Area High School classmates and sentenced to 8 to 16 years in state prison. Houck stressed that lasting consequences for many people can result from one person’s regrettable actions, with the effects of a decision to drive drunk or distracted rippling throughout entire communities. 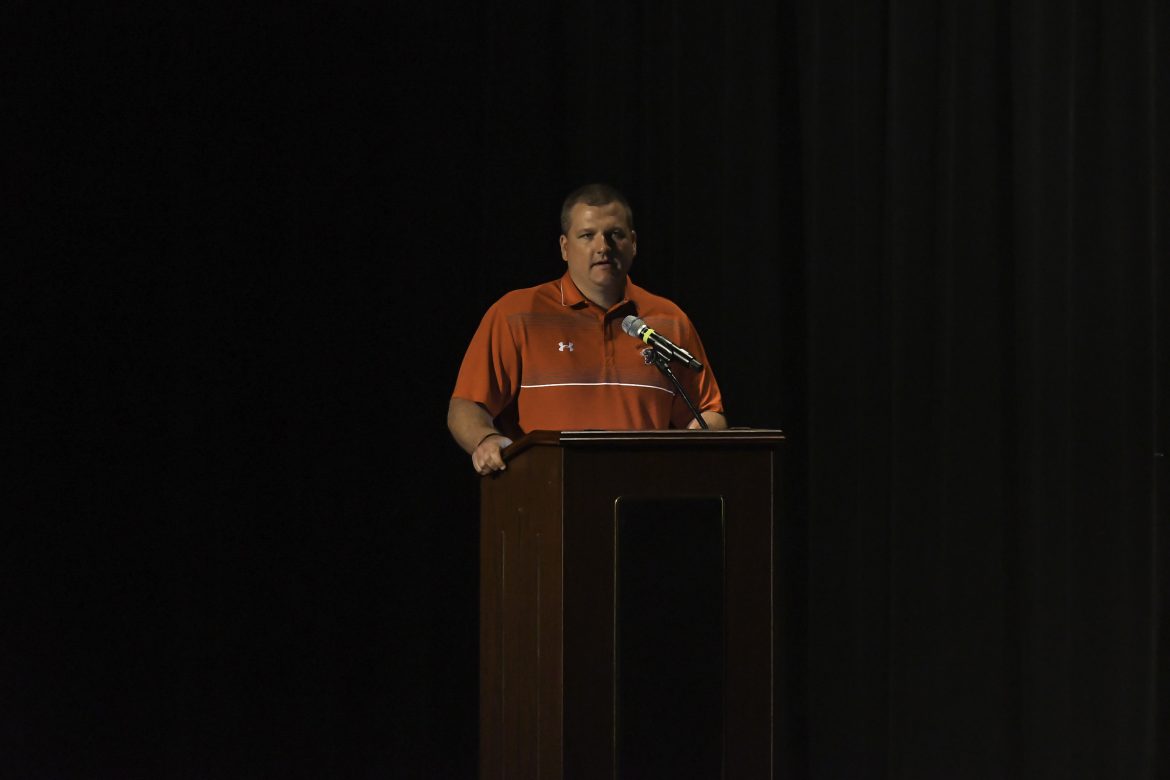 Saucon Valley Athletic Director Bob Frey encouraged students to have fun at the Junior/Senior Prom, and to also be responsible.

Saucon Valley Director of Athletics Bob Frey closed out the assembly by saying the school district and staff want so much for students to have fun at Friday night’s Prom, but stressing that it is imperative that they stay safe and make good choices. He asked that they protect their futures and “choose tomorrow.”

Stay safe students, the Source is with you!

A special thanks to Saucon Valley School District staff advisors: