A unique property that has served as a place of worship for local Jehovah’s Witnesses for nearly 30 years is currently for sale in Lower Saucon Township.

The Kingdom Hall at 2550 Applebutter Road, Hellertown, is being sold as part of a strategic divestiture of assets by Jehovah’s Witnesses in the Lehigh Valley and beyond, according to a source familiar with how local congregations are organized and governed.

The hall formerly housed the Hellertown congregation of Jehovah’s Witnesses, which last year became the Saucon Valley congregation and was merged with two other congregations. Its members now meet at the Emaus Avenue Kingdom Hall in Salisbury Township.

Another congregation that met at the Applebutter Road Kingdom Hall, known as the East Bethlehem Jehovah’s Witness congregation, also merged with other local congregations and now meets elsewhere. 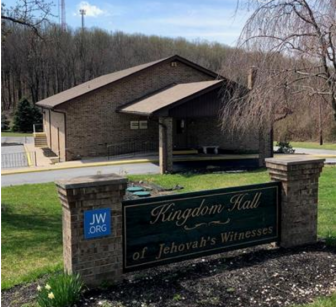 The Kingdom Hall at 2550 Applebutter Road in Lower Saucon Township (Hellertown) was listed for sale in April.

According to the source, Jehovah’s Witness congregations are merging and redundant properties are being sold as part of a worldwide efficiency initiative that will free up additional funds for the church’s relief work in the U.S. and abroad; money that is needed because–in lieu of the offerings and tithes many other religious denominations receive–Jehovah’s Witnesses receive only voluntary donations to help fund their missionary and relief work.

The Kingdom Hall on Applebutter Road was built in 1990 and contains more than 7,300 square feet of space on two levels, one of which is an unfinished basement.

The “property could…easily be converted to a multitude of office uses,” a real estate listing for it states. “Features include dedicated parking for over 55 vehicles, two ADA restrooms, baby changing room, coat room, two viewing rooms and plenty of storage.”

The property is listed for $350,000 by James J. Balliet of KW Commercial in Allentown.

Interior and exterior photos of the property can be found with the online listing for it, which is featured on the Greater Lehigh Valley Realtors website.

It is located about a quarter of a mile west of where Applebutter Road crosses over I-78.