The Bethlehem Steel Corporation played a significant role in the 20th century development of the Saucon Valley, which is one of the reasons Saucon Source will bring you the Martin Tower implosion live on Facebook this Sunday, May 19, in Bethlehem, Pa.

In addition to being the tallest building in the Lehigh Valley, Martin Tower was the iconic headquarters of Bethlehem Steel from its opening in 1972 until the company’s bankruptcy in 2001. In the decades preceding Bethlehem Steel’s post-war boom years, company officials were responsible for founding local institutions such as Steel Club in the 1930s and Saucon Valley Country Club in the 1920s, as well as the construction of Hellertown’s Mountainview neighborhood in the 1940s. During the Steel’s heyday, thousands of local residents worked at the Bethlehem plants and in the coke works.

The implosion of the building is scheduled to begin at 7 am Sunday, weather permitting.

The current National Weather Service forecast for Sunday calls for mild temperatures, with a 40 percent chance of showers before 2 p.m.

We will begin our live feed from the area of Eigth Avenue near the Bethlehem Rose Garden approximately 10 minutes before the detonation, which officials estimate will last 17 seconds.

If you are planning to travel to Bethlehem to watch the implosion, be aware that there will be an exclusion zone around the tower–which is located at Eighth and Eaton avenues–as well as a number of major road closures that will result in traffic detours.

Visit the Martin Tower website the City of Bethlehem has established for more information about traffic, recommended safety precautions, demolition protocols and more. 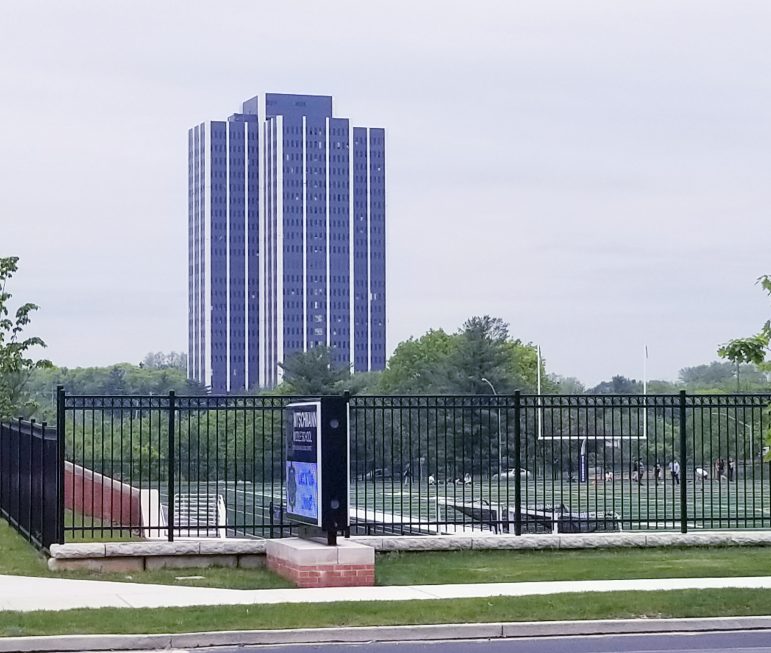 Less than 48 hours before its scheduled implosion, the iconic Martin Tower–former headquarters of 20th-century industrial titan Bethlehem Steel Corporation–is seen from Eighth Avenue near W. Union Boulevard in West Bethlehem Friday. Following a years-long remediation process that stripped the building of materials that made it a symbol of luxurious excess–as well as the asbestos that made plans to repurpose it problematic–the tower will be imploded on Sunday, May 19 at 7 a.m. Developers have proposed building luxury apartments, retail space and medical offices atop the site the tower now occupies.

Please be sure you have liked Saucon Source on Facebook and have notifications enabled in order to receive a notification when our live video begins (click on the “Following” button and make sure there is a check mark next to “On” under “Notifications”).

If you have friends who won’t be able to watch the implosion live on TV, Facebook is a great viewing alternative, and we encourage you to share this post with others who may want to see history being made.

*Important: Please note that we will make every effort to ensure that this video is streamed uninterrupted and in HD, however, with the potential for unforeseen broadcast limitations such as crowd size, weather, cellular service and the like, there is a slight chance that technical difficulties could occur and affect the broadcast.

We look forward to bringing you this once-in-a-lifetime event using 21st century technology.